SYNTHESIS, CHARACTERIZATION AND BIOLOGICAL EVALUATION OF Cu(II), Co(III) AND Fe(III) COMPLEXES OF 2-BENZOYL-3-(NITROPHENYL)QUINOXALINE

SYNTHESIS, CHARACTERIZATION AND BIOLOGICAL EVALUATION OF Cu(II), Co(III) AND Fe(III) COMPLEXES OF 2-BENZOYL-3-(NITROPHENYL)QUINOXALINE

ABSTRACT:  A new series of transition metal complexes of the type ML where M = Cu(II), Co(III) and Fe(III) and L = 2-benzoyl-3-(nitrophenyl)quinoxaline have been characterized and the structural features were arrived from the elemental analysis, magnetic susceptibility, molar conductance, FT- IR, UV-Vis and NMR spectral data. From the spectral measurements and magnetic susceptibility values a square planar geometry was proposed for Cu(II) complex and an octahedral geometry for Co(III) and Fe(III)  complexes. The qualitative and quantitative antimicrobial activity test results proved that all the prepared complexes are very active especially against E. coli, S. aureus, C. albicans and A. niger.

There are a number of processes available to generate quinoxaline but generally, they are synthesized by the condensation of 1, 2-dicarbonyls with 1, 2-diamines in presence of suitable catalyst using various solvent systems. They have been widely used in dyes, pharmaceuticals 1, 2 and electrical/photochemical materials 3-7.

Quinoxaline ring moiety constitute part of the chemical structures of various antibiotics such as Echinomycin, Levomycin and Actinoleutin 8-11 that are known to inhibit growth of gram positive bacteria and are active against various transplantable tumors.

Physical Measurements: Microanalytical data of the compounds were recorded in the Elementar Vario EL III CHN Analyzer. The FT-IR spectra of the samples were recorded on a Shimadzu spectrophotometer in 4000-400 cm-1. The UV-Visible spectra were recorded on an Elico SL 159 UV-Vis Spectrophotometer. The X band ESR spectra of the copper complex was recorded at 77K on a JES-FA200 ESR spectrophotometer using diphenylpicrylhydrazyl(DPPH) as internal standard. Magnetic susceptibility measurements of the complexes were carried out by Guoy balance using copper sulphate as the calibrant. The molar conductance of the complexes was measured using a systronics conductivity bridge at room temperature in DMSO solution. The antimicrobial activities of the ligand and its complexes were carried out by disc diffusion method.

Synthesis of 3-(2-Nitro-phenyl)-1-phenyl-propenone: An equimolar amount of acetophenone (1.20ml, 0.01mmol) and o-nitrobenzaldehyde (1.52g, 0.01 mmol) were mixed and stirred for 30 minutes. The contents were cooled and 15ml aq. KOH was added slowly and the mixture was stirred for 3 hours. The solid obtained was filtered, washed, dried and recrystallised from ethanol.

Synthesis of bromo derivative of 3-(2-Nitro-phenyl)-1-phenyl-propenone: In continuation of above reaction the product were dissolved in 30ml of acetic acid and added 2ml of bromine. The mixture was stirred for 30 minutes; the product obtained was filtered, dried and recrystallized from ethanol.

Synthesis of 2-benzoyl-3-nitrophenyl quinoxaline: The quinoxaline derivative was prepared by refluxing a mixture of o-phenylene diamine and the bromo derivative in methanol (1:1) in the presence of conc. H2SO4 (2 drops) for 30 minutes. The product obtained was filtered, dried and recrystallized from ethanol 21. 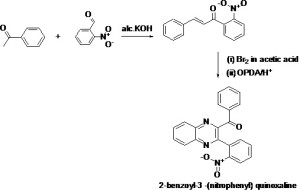 Synthesis of complexes: The alcoholic solution of the ligand and metal chlorides were refluxed for 5 hours. The solid obtained was collected, filtered, washed with water and dried. 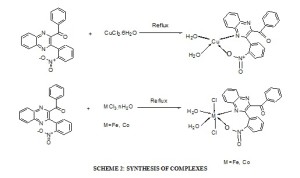 Metal estimation: Metal estimation for Cu(II), Co(III) and Fe(III) complexes was done by incineration method. The metal complexes were taken in a silica crucible. Ammonium oxalate was added to it and it was incinerated 3-4 hours with Bunsen flame till corresponding stable metal oxide was formed. It was cooled and weighed again till constant values were obtained. From the weight of the metal oxides, the compositions of metal in the complexes were calculated.

Cell Treatment Procedure: The monolayer cells were detached with trypsin-ethylenediamine tetraacetic acid (EDTA) to make single cell suspensions and viable cells were counted using a hemocytometer and diluted with medium containing 5% FBS to give final density of 1x105 cells/ml. one hundred microlitres per well of cell suspension were seeded into 96-well plates at plating density of 10,000 cells/well and incubated to allow for cell attachment at 37ºC, 5% CO2, 95% air and 100% relative humidity. After 24 hours the cells were treated with serial concentrations of the test samples.

They were initially dissolved in neat dimethylsulfoxide (DMSO) and diluted to twice the desired final maximum test concentration with serum free medium. Additional four, 2 fold serial dilutions were made to provide a total of five sample concentrations. Aliquots of 100 µl of these different sample dilutions were added to the appropriate wells already containing 100 µl of medium, resulted the required final sample concentrations. Following drug addition, the plates were incubated for an additional 48 hours at 37ºC, 5% CO2, 95% air and 100% relative humidity. The medium containing without samples were served as control and triplicate was maintained for all concentrations.

MTT Assay: 3-[4,5-dimethylthiazol-2-yl]2,5-diphenyltetrazolium bromide (MTT) is a yellow water soluble tetrazolium salt. A mitochondrial enzyme in living cells, succinate-dehydrogenase, cleaves the tetrazolium ring, converting the MTT to an insoluble purple formazan. Therefore, the amount of formazan produced is directly proportional to the number of viable cells.

After 48 hours of incubation, 15µl of MTT (5mg/ml) in phosphate buffered saline (PBS) was added to each well and incubated at 37ºC for 4hours. The medium with MTT was then flicked off and the formed formazan crystals were solubilized in 100µl of DMSO and then measured the absorbance at 570 nm using micro plate reader. The % cell inhibition was determined using the following formula;

General properties:  The analytical data of the complexes are given in table 1.

The above d values confirm the structure of the ligand 2-benzoyl-3-(nitrophenyl) quinoxaline.

FT-IR Spectral data of the Complexes: The spectra of the complexes illustrate broad band at 3300 cm-1 is due to the presence of water molecule. The C = N stretching band in the free ligand is found to be at 1606 cm-1. This is shifted to lower wave number 1571, 1580 and 1579 cm-1 in Cu(II), Co(III) and Fe(III) complexes respectively indicating the participation of the azomethine nitrogen of the quinoxaline ring in coordination. New bands observed at 542, 605 and 590 cm-1 in Cu(II), Co(III) and Fe(III) complexes which are not seen in the spectrum of the ligand can be attributed to M-N stretching vibration. From the IR spectra, it is proved that the coordinating site is ‘N’ in the quinoxaline ring 25, 26. The N-O stretching frequency of the nitro group is observed at 1394 cm-1 for the ligand and for the complexes it is shifted to lower frequencies ie 1375, 1375, 1370 cm-1 for Cu(II), Co(III) and Fe(III) complexes respectively. This proves that the ‘O’ in the nitro group is coordinated forming a seven membered chelate ring in the complexes 27, 28. The IR spectra of ligand and the complexes are shown in Fig. 2-5 and the values are tabulated in table 2. 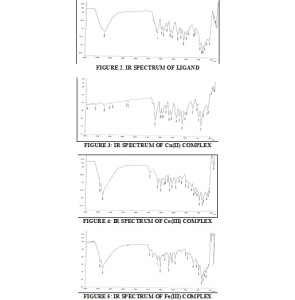 TABLE 2: IR STRETCHING FREQUENCIES 2-BENZOYL-3-(NITROPHENYL)QUINOXALINE AND ITS COMPLEXES IN Cm-1

TABLE 4: SCREENING FOR ANTIFUNGAL ACTIVITY OF C21H15N3O2 AND ITS COMPLEXES

TABLE 5: SCREENING FOR ANTIBACTERIAL ACTIVITY OF C21H15N3O2 AND ITS COMPLEXES 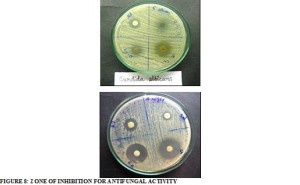 According to Overtone’s concept of cell permeability, the lipid membrane that surrounds the cell favors the passage of only the lipid soluble materials whose liposolubility is an important factor, which controls the antimicrobial activity. On chelation, the polarity of the metal ion is reduced to a great extent due to the overlap of the ligand orbital and partial sharing of the positive charge of the metal ion with donor groups. Further, it increases the delocalization of pi electrons over the whole chelate ring and enhances the lipophilicity of the complexes.

This increased lipophilicity enhances the penetration of the complexes into lipid membranes and blocking of the metal binding sites in the enzymes of microorganisms. These complexes also disturb the respiration process of the cell and thus block the synthesis of proteins, which restricts further growth of the organisms 31-34. It is evident from table 6 and 7 that the MIC value for Fe(C21H15N3O2)Cl2(H2O)2 against S. aureus  and E. coli is 250 μg/ml and 500 μg/ml respectively and the MIC value for Co(C21H15N3O2)Cl2(H2O)2 against C. albicans and A. niger is 125 μg/ml.

Anticancer activity of Co(C21H15N3O2)Cl2(H2O)2 complex: To verify this bio-reductive activation mechanism under in-vitro conditions, cytotoxicity studies were carried out. Moreover, as the balance between the therapeutic potential and toxic side effects of a compound is very important when evaluating its usefulness as a pharmacological drug, experiments were designed to investigate the in-vitro cytotoxicity of the synthesized cobalt complex against the human breast cancer cell line MCF 7. Cytotoxicity was determined by means of a colorimetric micro culture MTT assay, which measures mitochondrial dehydrogenase activity as an indication of cell viability. It is evident that the number of cells decreased with an increase in the concentration of the Co(III) complex (Fig. 10).

The complex showed higher potential antineoplastic activity which is evidenced by low IC50 values (50% inhibitory concentration after exposure for 48 hours in MTT assay) of 55.69µg/ml which is about twice resistant as CDDP (35.0 μM) against the cancer cells throughout the duration of the experiment 35.

CONCLUSION: The heterocyclic compound 2-benzyl-3-(nitrophenyl) quinoxaline coordinates to the Cu(II), Co(III) and Fe(III) ions using the nitrogen in the quinoxaline ring and the oxygen of the nitro substituent. The assignment of the square planar for Cu(II) and the octahedral geometry for Co(III) and Fe(III) complexes with seven membered chelate ring is corroborated by magnetic, infrared and electronic spectral measurements. The in-vitro anti-microbial studies show that the Cu(II) and the Fe(III) complex has a broad spectrum antibacterial activities against E. coli and   S. aureus and the  Co(III) complex antifungal activities against C. albicans and A. niger. The in-vitro cytotoxicity study show that the Co(III) complex exhibits in-vitro anti-tumour activity against the human breast cancer cells with IC50 55.69 μM.

In conclusion, new classes of quinoxaline heterocycles were synthesized and the results revealed that the compounds possess significant antimicrobial and anticancer activity. Therefore, this study would be a fruitful matrix for the development of novel class of quinoxaline derivatives as interesting lead molecules for further synthetic and biological evaluation.