INTRODUCTION: Heterocyclic chemistry is a very important branch of organic chemistry accounting for nearly one-third of modern publications 1. Heterocycles are an important class of compounds, making up more than half of all known organic compounds. Quinazoline is a fused six-member aromatic ring (a benzene ring and a pyrimidine ring are fused). Quinazoline is a fused bicyclic compound earlier known as benzo-1, 3-diazine 2. 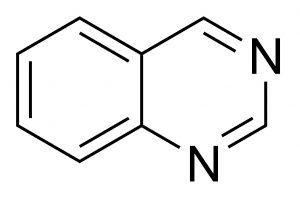 In the current study, one such versatile, heteroaromatic system, Quinazoline2,4-diones in their Schiff base form , has been explored for its biological potential.

A Schiff base is a compound with a functional group that contains a carbon-nitrogen double bond with the nitrogen atom connected to an aryl or alkyl group 3. They are usually formed by condensation of primary amine with the carbonyl compound.

They have occupied an important position in the modern inorganic and organic chemistry 4, 5.

The present synthesis work is involve greener method by microwave synthesis. Microwave synthesis is the new lead which is being used as the source of heating in the organic synthetic reaction 6. It is the major breakthrough in the synthetic organic chemistry whereas the conventional heating is the inefficient and time-consuming. Protozoa, Bacteria, Fungi and Virus are the pathogenic micro-organisms that cause diseases and disorders 7.

Out of the above stated causes, Bacterial infections are the most prominent reason for the health problems and they are caused by pathogenic Bacteria 8. Resistance development is the most common drawback for any anti-bacterial agent and this forms the rational or the basis to discover new and novel anti-bacterial agents of either natural or synthetic origin to fight the viable organisms 9.

Chemicals and instruments: All chemicals and solvents used were of analytical grade and purchased. The melting points were determined in open capillaries and are uncorrected. Purity of the compounds was checked by TLC having silica as adsorbent using hexane and ethyl acetate (2:1) as mobile phase. IR spectra were recorded FTIR spectrophotometer. 1H NMR spectra were obtained in DMSO.

Materials: All the chemicals and reagents were of analytical grade and used without further purification. The starting material was obtained from Anshul Specialty Molecules Ltd, Mumbai, India as a gift sample and used as such without purification. 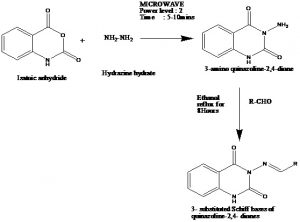 Scheme for Synthesis Of Schiff’s Base:

An equimolar quantity of isatoic anhydride and hydrazine hydrate were taken in a 500ml round bottom flask and kept in Microwave assisted radiation for 5-10mins under Power level 2. The reaction mixture was cooled and poured into Petri plates to get white crystals, which was filtered washed with distilled water and recrystallized from aqueous ethanol 10.

Step 2: General procedure for the synthesis of 3- substituted Schiff bases of quinazoline-2, 4- diones

Quinazoline-2,4-dione (0.01mol) was taken in 100ml round bottom flask and ethanol (30ml) was added to dissolve the compound. The substituted aromatic aldehydes (0.01mol) were added and

refluxed for about 8hrs 10. The progress of the reaction was monitored by TLC, The excess of solvent was distilled off, the crystals formed on cooling were collected 10. 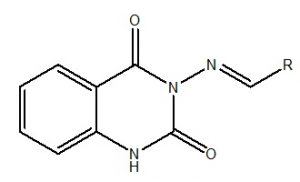 The newly synthesized 3-Substituted Schiff bases of Quinazoline2,4-diones in this research work are as follow in Table 2.

TABLE 2: THE NEWLY SYNTHESIZED 3-SUBSTITUTED SCHIFF BASES OF QUINAZOLINE2,4-DIONES IN THIS RESEARCH WORK

Sterilization: Sterilization was achieved by autoclaving at 394K and 100 kPa for 15 minutes.

Principle: The method used to study the anti-bacterial activity is Disc Diffusion method. In this well-known procedure, agar plates are inoculated with a standardized inoculums of the test microorganism. Then, filter paper discs (about 6 mm in diameter), containing the test compound at a desired concentration, are placed on the agar surface. The Petri dishes are incubated under suitable conditions 12, 13. Generally, antimicrobial agent diffuses into the agar and inhibits germination and growth of the test microorganism and then the diameters of inhibition growth zones are measured.

Disk-diffusion assay offers many advantages over other methods: simplicity, low cost, the ability to test enormous numbers of microorganisms and antimicrobial agents, and the ease to interpret results provided.

Procedure: Muller Hinton Agar plates were prepared and the test microorganisms were inoculated by the spread plate method. Filter paper discs approximately 6mm in diameter were soaked and placed in the previously prepared agar plates. Each disc was pressed down to ensure complete contact with the agar surface and distributed evenly so that they are no closer than 24 mm from each other 18-20. The agar plates were then incubated at 37ºC. After 48hrs of incubation, each plate was examined. The resulting zones of inhibition were uniformly circular with a confluent lawn of growth. The diameters of the zones of complete inhibition were measured, including the diameter of the disc.

Antibacterial Activity: The difference in anti-bacterial activities of the investigated Schiff bases and their parent drugs were studied by the disc diffusion technique. The zone of inhibition was measured against Bacillus Subtilis (Gram positive) and E. coli (Gram negative) and the results are presented. The cursory view of the data indicates the following trend in antibacterial activity of the substances under investigation A clearing zone around the disc indicates the inhibitory activity of the compound on the organism.

Zone of inhibition of Compound A ,B and standard against Bacillus Subtilis: 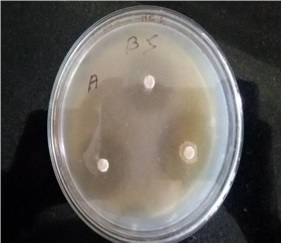 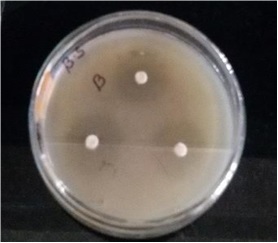 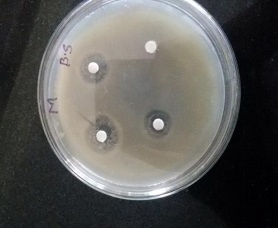 Zone of inhibition of Standard against Bascillus Subtilis (M)

Zone of inhibition of Compound A ,B and standard against E.coli: 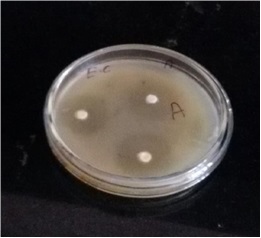 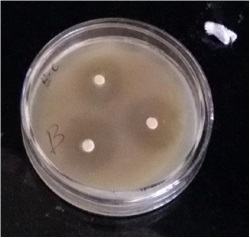 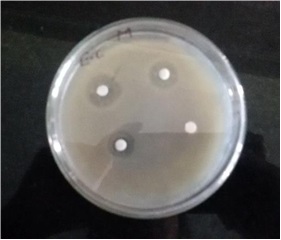 Zone of inhibition of Standard against E. coli (M)

FIG. 5: ZONE OF INHIBITION OF SYNTHESIZED COMPOUNDS AGAINST BASCILLUS SUBTILIS AND E. COLI [*values in mm for Zone of inhibition]

CONCLUSION:This research work includes chemistry of Schiff bases which have been synthesized using different aromatic aldehydes and study of their biological activity.

The Schiff bases of quinazoline 2,4-diones have been synthesized successfully as per the designed scheme of synthesis which includes Greener and conventional method.

Greener synthesis method i.e Microwave synthesis is the new lead which is being used as the source of heating in the organic synthetic reaction. It is the major breakthrough in the synthetic organic chemistry whereas the conventional heating is the inefficient and time-consuming.  These compounds are characterized by various physicochemical and spectral analyses by the FT-IR spectral analysis and 1H-NMR.

The zone of inhibition was measured against Bascillus Subtilis (Gram positive) and E. coli (Gram negative) and the results are presented. Results revealed that most of the compounds exhibit antibacterial.

ACKNOWLEDGEMENT: Author would like to acknowledge Anshul Ltd, Mumbai for providing Gift sample and V.E.S. college of Pharmacy,

Chembur for providing facilities in carrying out the research work.