A substantial interest in rational design of novel transition metal complexes which bind and cleaves duplex DNA has been a motivation of the present investigation. This DNA adhesion of metal complex which targets bacterial DNA and cleaves it thereby results in an effective antibacterial agent. In the present work two series of metal diketonates were prepared by using diketones like acetyl acetone and benzoyl acetone. Metals like Cu2+, Ni2+, Co2+ were used for complexation. Bacterial cultures Staphylococus aureus, Bacillus subtilis, Escherichia coli and pseudomonas aeruginosa and fungal cultures Candida albicans, Aspergillus niger were used for screening anti-bacterial and anti-fungal activities respectively. Anti-microbial screening was carried out by using Kirby-Bauer disc plate method .It was found that metal complexes of benzoyl acetone shown more anti-microbial action. The presence of aryl ring in the molecular structure seems to augment the antimicrobial activity of the compound. Further Cu (II), Ni (II), Co (II) complexes of ML2 stoichiometry were characterized by  UV, IR, mass and 1H NMR spectroscopies.

INTRODUCTION: Molecular manipulation of a promising compound act as a major approach to discovery of new drugs .since past many years coordination chemistry, which deals with metal complexes has  been a subject of interest. There are also reports reveling that some drugs show increased activity when administered as metal complexes rather than organic compounds. Metal diketonates are organomettalic compounds where a metal atom has replaced enolic hydrogen of a beta diketonate.

Transition metals like Cu (II), Ni (II), Co (II) were used as metals, as they have the ability to form wide range of coordination complexes. Metal ligand complexes are positively charged and DNA phosphate sugar backbone is negatively charged and the interaction is electrostatic 1.

Here, all the efforts were made to compare the antimicrobial action of metal acetylacetonate with aryl 1, 3-diketone metal complexes.

MATERIALS AND METHODS: The chemicals were supplied by Sigma Aldrich (India).Melting points were determined by open tube capillary method and are uncorrected. The homogenicity of the compounds was checked on thin layer chromatography (TLC) plates (silica gel G) using the solvent system Chloroform: Acetone (5:1). The spots were evaluated by exposure to UV light. Electronic spectra were recorded in methanol solution (10-4) on a UV-1601 Schimadzu recording spectrophotometer.IR spectra were obtained on a Schimadzu 8101 A FTIR  spectrophotometer.

Synthesis of 1, 3-diketone metal complexes: Copper(II), nickel(II) and cobalt(II) complexes were prepared by the following    general method 3 . To a refluxing solution of the diketone (0.002 mol) in methanol (15 mL), an aqueous solution of metal(II)acetate (0.001 mol, 10 mL) was added and the reaction mixture was refluxed for ca. 3 h. and cooled to room temperature. The precipitated complex was filtered, washed with water, then with ethanol and dried in vacuum. Further recrystalliised by using methanol. 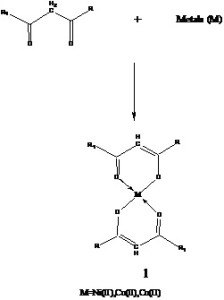 Characterization data of all synthesized compounds are mentioned in table 1.

Anti microbial bio assay of 1,3-diketone  complexes: Bacterial  and fungal culture were grown on nutrient agar and czepak dox agar respectively. Anti microbial screening was carried out by using Kirby-Bauer disc plate method. Concentrations of 500mg/disc and 250 mg/disc were used for all the test compounds and results were compared with the standard drug ciprofloxacin at 10 mg/disc and fluconazole (20mg /disc)  for anti bacterial and anti fungal screening respectively  by using dimethyl formamide as the vehicle. The results were interpreted as per Kirby-Bauer method 4.

RESULTS AND DISCUSSION: 1, 3-diketones formed by above method were crystalline in nature with sharp melting points. The melting points and the carbon, hydrogen and metal  percentages are presented in Table 2.

Carbon, hydrogen percentages are in agreement with ML2 stochiometry. The electronic, IR, NMR and mass spectral data of complexes are compatible  with the structure that would result when the chelated enol proton of the ligand is replaced by metal ion as in structure 1.

The UV spectra of the ligands  in 95% ethanol (10-3M) showed two broad bands ca. 420 and 315 nm respectively due to  carbonyl and olefinic functions.In the metal complexes former bands showed a bathochromic shift (5-10 nm) due to the involvement of dicarbonyl function in complexation 5.

In the IR spectra of metal complexes,bands in the region 1750-1650 cm-1due to carbonyl stretching was  almost disappeared but instead two new bands appeared at ca. 1607 cm-1 and 1598 cm-1 of appreciable intensity due to metal chelated carbonyl groups.Several medium intensity bands appeared in this region due to aromatic and alkenyl  ѵ(C=C) vibrations. This is further supported by the appearance of medium intensity bands at ca.450 and ca.503 cm-1 presumably due to ѵ (M-0) vibrations6. Thus IR data strongly support structure 1 of the complexes. The important infrared bands and their assignments are given in table 3.

In the H NMR spectra of metal complexes the low field signal due to the enol proton of the ligand is absent indicating its replacement by the metal ion during complexation7 .The integrated intensities of the aryl and alkenyl protons agree well with the[ ML2] stoichiometry of the complexes as in structure 1.The assignements of various proton signals observed are assembled in Table 4.

Peaks correspond to [ML]+, L+ and fragments of  L+  are also present in the spectra.

The anti bacterial and anti fungal activity of 1,3 –diketone metal complexes were illustrated in table 5.

The data (table 5) revealed that, all the synthesized metal complexes possess comparable anti bacterial and anti fungal activities to that of standard drugs. Out of 6 synthesized compounds P1A1 is highly active against all the organisms in both 500 μg/disc and 250 μg/disc concentrations. It is also observed that Cu complexes shown more activity than other compounds. Chelation reduces the polarity of the metal ion considerably, mainly because of the partial sharing of its positive charge with donor groups and possible electron π delocalization on the whole chelate rings 8. Thus, it helps these agents to interfere with normal cell process.

CONCLUSION: From the above results it may be concluded that, Cu(II) benzoyl acetonate showed significant difference in their anti microbial activity  with all other synthesized compounds. The formation of this compound was well explained by spectral studies. So in the diketone metal derivatives, P1A2 is considered to be the successful outcome of present work. So P1A2 can be considered to be the lead compound and further work can be done on this moiety to check its toxicity.