SYNTHESIS, CHARACTERIZATION AND PHYSICOCHEMICAL STUDIES OF Ni(II) AND Cu(II) COMPLEXES WITH SOME NITROGEN- OXYGEN AND NITROGEN SULPHUR DONOR LIGANDS

SYNTHESIS, CHARACTERIZATION AND PHYSICOCHEMICAL STUDIES OF Ni(II) AND Cu(II) COMPLEXES WITH SOME NITROGEN- OXYGEN AND NITROGEN SULPHUR DONOR LIGANDS

INTRODUCTION: Schiff bases are regarded as “privileged ligands” due to their capability to form complexes with a wide range of transition metal ions yielding stable and intensely colored metal complexes. Some of them   have been shown to exhibit interesting physical and chemical properties and potential biological 1, 2, 3, 4, 5, 6 activities.

Thiosemicarbazones are very versatile ligands. They can coordinate to metal as neutral molecules or after deprotonation as anionic ligands and can adopt a variety of different coordination modes.

Thiosemicarbazones usually act as chelating ligands with transition metal ion bonding through the sulphur and hydrazine nitrogen atom. Thiosemicarbazones and their complexes have received considerable attention because of their pharmacological activities 7.

Thiosemicarbazones and their complexes have received considerable attention because of their antifungal 8, 9, 10 ,11, 12, antitumor 13, 14, 15 antibacterial 16 antiamoebic, antimalarial, antiviral, radio protective and anti-inflammatory activities. Certain thiosemicarbazones are relatively specific inhibitors of ribonucleotide reductase, which is an important metabolic target for the development of chemotherapeutic agents against cancer 17. Metal complexes of Ni(II) are found to act as a sensor 18 and also nanoparticle act as a sensor 19.

In present paper, we report the synthesis and characterization of Ni(II) & Cu(II) complexes with thiosemicarbazones (L1) and semicarbazones (L2) derived from pyrrole-2-carboxaldehyde.

Chemicals: All the chemicals used in the present work were of analytical grade and procured from Sigma Aldrich Banglore India. Metal salt were purchased from E. Merck and used as received. The solvent used were either spectroscopic pure SRL/BDH or purified by   the recommended methods (Vogel, 1962).

Synthesis of Schiff base ligand L1 (Pyrrole-2-carboxaldehyde thiosemicarbazone): Hot ethonolic solution (50 ml) of thiosemicarbazide (4.55 gm, 0.05 mol) and pyrrole-2-carboxaldehyde (4.75 gm, 0.05 mol) mixed slowly with constant stirring in presence of acetic acid. This mixture was refluxed for 2 hours on a water bath. On cooling a cream colored compound was precipitated out. It was filtered washed with cold ethyl alcohol and dried under vacuum over P4O10. This reaction is a type of condensation reaction which takes place between aldehyde/ketone and thiosemicarbazide with elimination of water molecules which form thiosemicarbazones. The reaction can be represented as below.

Synthesis of Schiff base ligands L2 (Pyrrole-2-carboxaldehyde semicarbazones): An aquouse solution (50 ml) of semicarbazide hydrochloride (5.55 gm, 0.05 mol) added in an ethonolic solution (50 ml) of corresponding aldehyde pyrrole-2-carboxaldehyde (4.75 gm, 0.05 mol) in the presence of sodium acetate (4.1 gm, 0.05 mol). The reaction mixture was stirred vigorously for an hour in the magnetic stirrer. The crystalline product which formed was collected by filtration in each case washed several times with hot water and dried in vacuum over P4O10. This reaction is a type of condensation reaction which takes place between aldehyde/ketone and semicarbazide with elimination of water molecules which form semicarbazones. The reaction can be represented as below.

Crystals were obtained by dissolving the complex in DMSO and allowing slow evaporation over a period of 6 weeks.  Purity of the complexes was checked by the TLC color was noted, melting point was determined and yield of the complexes were calculated.

Physical Measurements: C, H, N were analyzed on a Carlo-Erba 1106 elemental analyzer. Molar conductance was measured on the Elico (CM82T) conducting bridge. Magnetic susceptibility was measured at room temperature on a Gouy balance using CuSO4.5H20 as a calibrant. A mass spectrum was recorded on JEOL, JMS.DX-303 mass spectrometer.  IR spectra (KBr) were recorded on a FTIR spectrum BX-II spectrophotometer. The electronic spectra were recorded in DMSO on Shimadzu UV mini-1240 spectrophotometer

The mass spectrum of the free ligands (L1) confirms the proposed formula by showing a peak at 169 amu corresponding to the molecular ions (M+ +1).

It also show a peak corresponds to loss of (-CSNH2) and various other fragments.

L2(P2CS): The IR spectra of ligands show bands around at 3448 cm-1 and 3325 cm -1 which may be assigned to -NH2 and -NH group respectively. The band [υ(C=N)] appeared at around 1631 cm-1.The mass spectrum of the ligands L2 confirm the proposed formula showing a peak at 153 Amu respectively corresponds to the  molecular ions (M+ +1). It also shows a peak corresponding to the molecular ion (M+ +1). 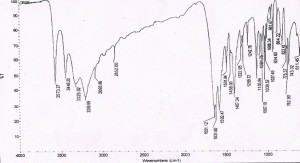 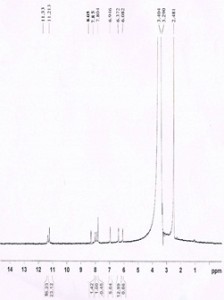 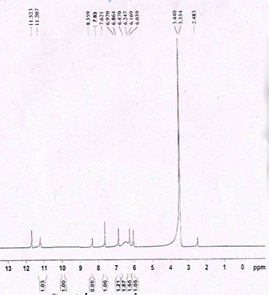 Complexes: On complex formation most of the bands in   the IR spectrum of the ligands undergoes frequency shift towards lower side   (around 20-30 cm-1) suggests that the ligands act as bidenting chelating agents coordinating through nitrogen of [υ(C=N)] group and sulphur of [υ(C=S)] group.

In case of thiosemicarbazones the bands of [υ(C=N)] and [υ(C=S)] shifted towards lower side acts as bidentate chelating agents coordinating through nitrogen of [υ(C=N)] group and sulphur of [υ(C=S)] group. In case of semicarbazones the bands of [υ(C=N)] and [υ(C=O)] shifted towards lower side acts as bidentate chelating agent coordination through nitrogen of [υ(C=N)] and oxygen of [υ(C=O)] group. On the basis of elemental analysis the complexes were found to have the composition shown in table 3. The molar conductance measurements of all the complexes in DMSO corresponds to non-electrolyte nature except [Ni(L1)2](NO3)2  which is 1:2 electrolyte because aniondo not participate in the bond formation with central metal/metal ion.

Nickel (II) complexes: The value of magnetic moments of Ni(II) complex at room temperature lies in the range from 2.92-3.96 B.M  (table 4). These values are in tune with a high spin configuration and show the presence of an octahedral environment around the Ni2+ ion in the complex. Electronic spectra of the chloro and nitro complexes (except nitrate complexes with ligands (L1) show electronic spectral bands in the range 9551-13,000, 11,000-20,000 and 19,000-27,000 cm-1. The ground state Ni(II) is an octahedral coordination is 3A2g. These value are in a tune with the spin allowed transitions 3A2g (F) → 3T2g(F), 3A2g (F) → 3T1g (F), 3A2g (F) →3T1g (P) corresponds to an octahedral geometry. The nitrates complexes of Ni(II) with ligands L1 have medium intensity electronic spectral band around at 9000 cm-1 assigned as υ1. The band at 14,640 cm-1 corresponds to υ2 is not splits. As the excited state is an orbitally non degenerate. The υ3 data appears at 24,000 cm-1 indicates tetrahedral geometry.

Copper (II) complexes: At room temperature Cu(II) complex show magnetic moment  in the range 1.86-2.08 B.M corresponding to one unpaired electron (table 4). The electronic spectra of six coordinated Cu2+ have both D4h or C4v symmetry and the Eg and T2g level, respectively.

Thus, threespin allowed transition are expected in the visible and near IR region. But only a few complexes are known in which such bands are resolved either by “Gaussian analysis” or by “single crystals polarization” studies. These Cu(II) complexes under study give rise absorption spectral band in the range 13,227-15,748 and 16,600-19,400 cm-1 corresponds to the tetragonal geometry. These bands have been assigned to the following transition in order of increasing energy.

Ligands fields Parameters: Various ligands field parameters were calculated for the complexes and are listed in table 4. The nephelauxetic parameter β= B (complex)/B (free ion). Where B free ion for Nickel(II) is 1041 cm-1. The value of β lies in the range 0.60-0.75 (table 5). These values indicate the appreciable covalent character of metal ligands sigma bond.

Electronic spectra and magnetic measurement indicate that the complex exhibit octahedral geometry except [Ni(L1)2](NO3)2 which has tetrahedral geometry.

A tetragonal geometry may be suggested for Cu(II) complexes. EPR of the Cu complex measures the exchange interaction which is less than 4.