ABSTRACT: Background: Antimicrobials are used for bacterial infections & has a great benefits in health related problems of human life. The main objectives of medicinal chemistry is synthesising and producing newer molecules having a valuable significant therapeutic action. Quinolones has a considerable scientific and clinical interest since their discovery. Objective: Quinolones class of drugs are useful in the treatment of serious bacterial infections thus keeping in view a potential approach is made for synthesising & characterizing of newer quinolone derivatives for their biological activity. Method: Quinolone ester was synthesised from Gould-Jacob reaction by using substituted aniline & diethylethoxymethelene malonate (EMME) Results: Solubility of all synthesised compounds were checked in various solvents & were characterized by FT-IR, 1H-NMR. Conclusion: The result of the present study thus demonstrates the anti-microbial activity against gram positive (Bacillus subtilis) & gram negative (Escherichia coli) strains.

INTRODUCTION: Infectious diseases 1 caused by bacteria affects millions of people and is a leading causes of death worldwide. Three of the top ten causes of death, or sixteen percent of all deaths each year, are from infectious diseases, for which the treatment is still remains an important and challenging problem because of multidrug resistant microbial pathogens. As one of the biggest challenges in 21st century is facing the modern medicine system. Discovery of newer drug substances with a potential pharmacological effectiveness against several pathogenic microorganisms becomes highly desirable.

Antimicrobials 2 are one of the most significant use for bacterial infections (Penicillin the first anti-microbial agent) 3 has a great benefits in health related problems of human life. The main objectives of medicinal chemistry is synthesising and producing newer molecules having a value of significant therapeutic agents. Development of new antibiotics 4 has been achieved from derivatives of known antimicrobial agents or by identification of novel agents active against previously unexploited targets.

Quinolones has a considerable scientific and clinical interest since their discovery. The term quinolones is commonly used for the quinolone carboxylic acids or 4-quinolones; a group of synthetic antibacterial agents containing 4-oxo-1,4-dihydroquinoline skeleton 5. They are relatively new class of synthetic antibiotics with potent bactericidal against many clinically important pathogens which are responsible for variety of infections including urinary tract infections (UTI) 6, gastrointestinal infections, respiratory tract infections (RTI) 7 & some other infections. Different structural modifications in the quinolone nucleus have been made to increase antimicrobial activity and improve its performance. During 1980, s, it was discovered that a fluorine atom at position 6 greatly enhance the spectrum of activity 8.

Quinolones & Fluoroquinolones 9 are active against the DNA-gyrase enzyme, a type II topoisomerase 10. It is believed that DNA-gyrase introduces negative supercoils in DNA by wrapping the DNA around the enzyme. The enzyme then catalyses the breakage of a segment of the wrapped DNA, the passage of a segment of the same DNA through the break and finally the relegation of the break. In this way, DNA “knots” are resolved and the DNA is exposed for replication process. DNA-gyrase is essential for all bacteria and is therefore an excellent target for antibiotics. Quinolones nucleus turn the action of gyrase against the bacteria by blocking the strand passage and thereby hindering proper replication of DNA. This eventually leads to cell death11.

Since the introduction, following Fig: 1 depicts quinolones class of drugs are useful in the treatment of serious bacterial infections. They potentially offer a high potency, oral and intravenous formulations, high serum levels, good bioavailability and large volume of distribution indicating concentration in tissues with a potentially low incidence of side-effects. Nalidixic acid 12 was the first quinolone to be developed, but Norfloxacin 13 became the first available for clinical use. On the other hand, it is emphasized that further developments are required in order to combat with the infectious conditions. Thus, keeping in view a potential approach is made in our research of synthesising, characterization & in-vitro anti-microbial studies of newer quinolone using disc-plate agar diffusion method. 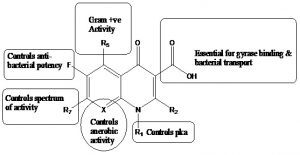 MATERIAL AND METHODS: All the chemicals & reagents collected were of LR grade from Pallav Chemicals & Loba Chemie. The reactions were monitored by thin layer chromatography on TLC silica gel 60 F254 plates for completion of the reaction; mobile phase solvents were selected as n-hexane: ethyl acetate (3:2) for step-1 reaction; chloroform: methanol (9:1) with a drop of ammonia liquid for step-2, 3 & 4. Melting points of all the synthesized compounds

were checked in capillary tubes by using a melting point apparatus (VEEGO melting point apparatus). All the compounds were characterized by FT-IR spectrometer (IR-Affinity, Shimadzu) using ATR correction method; 1HNMR spectra were obtained from 500MHz instrument and chemical shifts were measured as parts per million downfield from Dimethyl sulfoxide (DMSO) as internal standard. 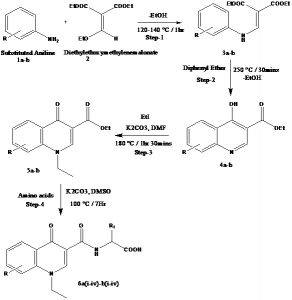 Step-2: Preparation of 7-Chloro-4-hydroxy-3-carboxylic Acid Ethyl Ester quinolone 4a: The 3- chloro-ethyl anilinomethylene malonate (3.15gm, 0.01mol) was added to diphenyl ether (3.17mol, 10 mL) and refluxed for 30mins at 250˚C with stirring. The mixture was cooled, filtered, washed with n-hexane and dried. The crude solid obtained was purified by recrystallization from DMF; excess of DMF was removed under vacuum.

Preparation of 7-Chloro-6-fluoro-4-hydroxy-3-carboxylic Acid Ethyl Ester quinolone 4b: The 3- chloro-4-fluoro-ethyl anilinomethylene malonate (2.97gm, 0.01mol) was added to diphenyl ether (3.17mol, 10 mL) and refluxed for 30mins at 250˚C with stirring. The mixture was cooled, filtered, washed with n-hexane and dried. The crude solid obtained was purified by recrystallization from DMF; excess of DMF was removed under vacuum.

Procedure for Synthesis of 7-Chloro-6-fluoro-1-ethyl-1,4-dihydro-4-oxoquinoline – 3 -carboxylic Acid Ethyl Ester) 5b: The mixture of 7-chloro-6-fluoro-1,4-dihydro- 4-oxoquinoline-3-carboxylic acid ethyl ester (2.51gm,0.01mol), ethyl iodide (1.56gm, 0.01mol), potassium carbonate (2.76g, 0.02mol), and charged with dimethyl formamide (20 mL) in 50mL round bottom flask and heated at 180˚C for 1hr30mins. Ice cold water was added to the reaction mixture. The crude solid obtained was purified by extracting in dichloromethane: methanol in ratio of 3: 1.

Procedure for In-vitro Anti-bacterial studies 19, 20, 21: The amino acid linked synthesized compounds were studied for their antibacterial activity against isolated Gram-positive strain (B. subtilis) and Gram-negative strain (E. coli) using disc diffusion method. All the cultures were prepared by Mueller-Hinton agar and the turbidity of all the bacterial cultures was adjusted to 0.5McFarland standard which is approximately 1 to 2 × 10-8 CFU/ml. The synthesized compounds and standard drug (10mg) were dissolved in DMSO (10 mL) and which was further diluted to achieve 25μg/ml; 50 μg/ml & 100 μg/ml. Agar plates were inoculated by streaking swab over the entire sterile agar surface, the procedure was repeated for 2 more times rotating the plates at 60˚ each time to ensure even distribution, the rim of the plates were also swabbed. After allowing inoculum to dry for 10mins at room temperature (RT) paper disc were placed which were previously soaked in the different concentration solution of synthesised compounds. The plates were allowed to stand at RT for 30mins & then incubated at 37˚C for 24hrs. Then plates were examined for the bacterial growth inhibition which were calculated in zone of inhibition (mm).

[*values in mm for Zone of inhibition]

CONCLUSION: The Amino acid linked quinolone derivatives have been synthesized successfully as per the designed scheme of synthesis. Physical characteristic like melting point, solubility have being determined for intermediate as well as for final compounds. Compounds were structurally characterized by spectral techniques (FT-IR, 1H-NMR) & elemental analysis is calculate in terms of percent for C, H & N. Anti-bacterial was carried out to determine the potency of the synthesised compounds.

ACKNOWLEDGEMENT: Author would like to acknowledge V.E.S. college of Pharmacy for providing facilities in carrying out the research work.