INTRODUCTION: Schiff bases are commonly used to synthesize new mixed ligand complexes. The unique properties like chelating structure, electron donor nature, simply tunable electronic and steric properties have proved that Schiff bases are greatly flexible in nature. The prepared mixed ligand complexes are different from routine metal complexes that they have minimum two special kinds of ligands linked to the one metal ion in a complex 1.

Materials: The chlorides of copper (II), cobalt(II), nickel(II) and zinc(II) are used as such. Other commercially available reagents are employed without any further purification, and they are isatin, p-nitroaniline, and 2,4-dinitroaniline purchased from Sigma-Aldrich. Ethyl alcohol is used as a solvent for the preparation of the Schiff base ligands and their respective mixed ligand-metal complexes.

Analysis and Physical Measurements: Sigma-Aldrich reagents are used for synthesizing all the ligands and complexes. All the glassware used for the preparation were cleaned with the chromic mixture, distilled water and then dried in an oven at 110 °C. With the help of CHN Analyzer Elementar Vario micro select, CHN elements are determined.IR spectral details were obtained in Shimadzu IR spectrophotometer with KBr pellets in the range of 400-4000 cm-1. UV-visible data were recorded in UV-visible spectrophotometer (Perkin Elmer) using DMSO as a solvent. Using calibrate Hg[Co(CNS)4] and Gouy balance magnetic moment values are recorded at room temperature molar conductance measurements are carried out in Elico Conductometer in DMF. Thermal analysis of the mixed ligand complexes was carried out using Perkin Elmer Diamond Thermal Analyzer in an inert atmosphere of nitrogen by recording the change in weight of the complexes. Melting points are determined in electrothermal capillary apparatus, and they are reported as uncorrupted values 8, 9.

Preparation of the Schiff Base Ligand (L1): Procedure available in the literature is used to synthesize Schiff base ligand (L1). 1.47g (0.01M) of isatin in 50 ml of ethanol is mixed with 1.38g (0.01) of p-nitroaniline taken in 50 ml ethanol. The mixture was refluxed for 2-3 h. The reaction mixture was concentrated and cooled. On cooling, orange colored Schiff base (L1) ligand precipitates. The precipitate is filtered washed with ethyl alcohol and recrystallized. Schiff base ligand purity is monitored by using ethyl acetate and petroleum ether as eluents, and column chromatography was used for separation. The molecular formula of Schiff base ligand C14H9O3N3 [L1]. 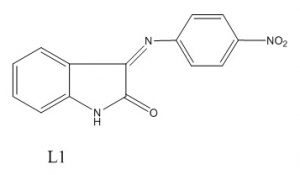 On cooling, Schiff base ligand (L2) precipitates, and the precipitate is filtered off, washed with ethanol and recrystallized. Schiff base ligand purity is monitored by using ethyl acetate and petroleum ether as eluents, and column chromatography was used for separation. The molecular formula of Schiff base ligand C14H8O5N4 [L2]. The analytical and physical data of both the ligands (L1&L2) presented in Table 1. 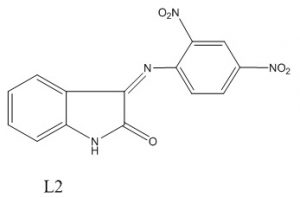 TABLE 1: THE ANALYTICAL AND PHYSICAL DATA OF THE LIGANDS

Synthesis of Mixed-Ligand Complexes: Mixed ligand metal complexes are synthesized with  salts of respective metal chlorides (0.01M in 50 ml of ethanol) added to 100 ml ethanolic solution of L1 and L2 (0.01M each) respectively and  are refluxed for 4-5 h at 80-90°C and then concentrated to small volume metal complexes precipitates on cooling. Mixed ligand complexes precipitates are, filtered and washed with ethanol and using fused calcium chloride complexes are dried. Stored in airtight containers.

RESULTS AND DISCUSSION: All the Four newly synthesized complexes have high decomposition temperatures and are colored complexes are stable towards air and are amorphous solids in nature The complexes have the common formula [ML1L2] where M = Co(II), Ni(II), Cu(II) and Zn(II). All the complexes show solubility in solvents like DMF and DMSO. And are insoluble in water. And our efforts are failed in determining molecular weights. The analytical and physical data of the mixed ligand metal complexes are as shown in Table 2.

Molar Conductance Measurements: The observed molar conductance data values in 10-3M DMF are in the range of 10-18 ohm-1 cm2mol-1, indicating the non-electrolyte nature of complexes and presented in Table 3. But the slightly higher conductivity values the complexes may be attributed to the partial solvolysis of the complexes in DMF 10, 11, 12, 13, 14.

Infrared Spectra: Mixed ligand complexes distinguishing vibration frequencies are recognized by comparing with the spectra of Schiff base ligand. Almost assignments of infrared bands on mixed ligand complexes are done purely on the reported information available in the literature on almost same systems 8, 9, 10. There are four possible donor sites in the complexes, and these are the two oxygen atoms and the two azomethine nitrogen atoms from each of the two isatin molecules of the ligands, L1 and L2. The IR spectrum of both the ligands (L1and L2) and their mixed complexes are characterized mainly by the strong bands, and their stretching frequencies are depicted in Table 3.

TABLE 3: SELECTED FT IR FREQUENCIES (cm-1) OF THE LIGAND AND THE MIXED COMPLEXES

The IR spectrum of both the ligands have characterized the bands around 1622 cm-1, 1747 cm-1 and 3450 cm-1 corresponds to azomethine group (C=N), carbonyl (C=O) and  NH(aromatic) of the isatin ring. The lower shift of wave numbers is observed in the IR spectra for mixed ligand complexes by 10-15 cm-1 for azomethine group. Carbonyl oxygen and N-H group. The lower shift in stretching frequency of both azomethine group and carbonyl oxygen in the spectra of metal complexes indicating that the involvement of carbonyl oxygen atom in coordination to the central metal ion 7, 8, 9, 10, 11. The change in the distribution of electrons and molecular environment around the ligand due to the introduction of metal ion causes a minor shift in the stretching frequencies of all the mixed ligand-metal complexes. In the far infrared region, one would expect the metal-ligand vibrations due to metal-nitrogen, metal-oxygen stretching vibrations. However, in the complexes, it is not easy to do the categoric assignments of these bands, as various skeletal vibrations of the ligands interfere and the definite assignments are rather difficult. The appearance of new bands around 485 cm-1 and 617 cm-1 assignable to νM-N and νM-O respectively. Selected FT IR frequencies (cm-1) of the ligand and mixed complexes are presented in Table 3.

Electronic Spectra and Magnetic Moment Measurements: In UV-Visible region, the electronic spectra of complexes are measured using DMSO solvent. The ultraviolet spectrum of both the ligands (L1 and L2)showed absorption bands at 38759 cm-1, and 3703 cm-1 which has been given to π - π* transitions, and the band at 32786 cm-1  and 33112 cm-1 has been given to n - π* transitions respectively. These transitions will remain to appear at almost the same wavelength in the complexes. Indicating the coordination of ligand with metal ions 15, 16, 17. Co(II) complex magnetic moment is found to be 4.46 BM and shows bands at 6263cm-1 9342cm-1 and assigned transitions are to 4A2-4T1(F)  and 4A2-4T1(P). Thus, the tetrahedral geometry has been suggested 12.

The geometry of any mixed ligand complex can be predicted using the d-d transitions in the electronic spectroscopy above 25000 cm-1. However, the Zn(II) complexes due to the completely filled d10 configuration, do not exhibit d-d transition and shows absorption band at 26901 cm–1 a charge transfer transition is assigned. Nevertheless, tetrahedral geometry may be proposed by comparing spectrum and configuration of Zinc (II) ion. Magnetic moment value of Ni(II) the complex is found to be 4.36 B.M. The electronic spectra of the Ni(II) complex show the bands at 10480 cm-1 and 15483 cm-1 and assigned transitions are 3T1(F)– 3A2 (F)  and 3T1 (F) - 3T1 (P). Tetrahedral geometry may be assigned for the complex 13.

The value of the magnetic moment of Cu(II) the complex is 1.98 B.M. The electronic spectra of the Cu(II) complex shows the band at 24092 cm-1 and is given 2E-2T2 transition. Thus, the tetrahedral geometry has been suggested 15. Electronic spectral data of the complexes are presented in Table 5.

TABLE 4: MOLAR CONDUCTANCE AND MAGNETIC MOMENT OF THE COMPLEXES

Thermo-gravimetric Studies (TGA): Mixed ligand complexes are subjected to thermo-gravimetric analysis at a rate of 20 °C/min up to 600 °C in the nitrogen atmosphere. Thermo-gravimetry relates weight change with temperature. It gives us information about the thermal stability of complexes.

Weight variation with an increase in temperature graphs can be obtained. The thermal decomposition all the four mixed ligand complexes take place in one stage with a temperature range 18, 19, 20. The decomposition is noticed in the temperature vary from 290-330 °C. It is due to the elimination of two ligand molecule (L1+L2) and finally left with the corresponding metal oxide. Thermogravimetric studies of mixed ligand complexes are shown in Table 6.

Cytotoxicity Assay: In-vitro cancer cells such as cervical cancer (HeLa), breast cancer (MDA MB-231), colon cancer (HCT-15) & Prostate cancer (PC-3) cells and non-cancer cells such as human embryonic kidney cells (HEK-293) and peripheral blood mononuclear cells (PBMCs) were purchased from National Centre for Cell Science (NCCS), Pune, India and maintained in the CO2 incubator as per the standard protocol. The test was used to test the ligands and mixed ligand complexes using MTT assay 16. Briefly, 1×106 cells/ml were treated with ligands and complexes dissolved in DMSO for 48 h, and MTT assay was performed as described 24, 25. The dose decreases 50% of the inhibition of the cells (IC50) was calculated using the GraphPad prism from the dose-response curve. Statistical analysis was performed by one way ANOVA test from the five independent experiments and treatments were performed by octuplets.

Antioxidant Test: The antioxidant potential was determined by using the DPPH free radical scavenging assay 25. Briefly, 1 ml of the different concentrations of complex ranging from 0 to 100 µM was added to 1 ml of 0.004% of DPPH solution and incubated at room temperature for 35 min under dark. Absorbance values are recorded at 500nm after 30 min by considering ascorbic acid as positive reference antioxidant activity. Then the percentage activity calculations are carried out 24, 25.

RESULTS AND DISCUSSION: The cytotoxicity of the two ligands and their mi complexes exhibited dose-dependent cytotoxicity in the cancer cells. Among them, the copper and nickel complexes were active at the lower dose levels compared to the ligands other complex and metal complexes Table 7. Notably, the cytotoxicity was more two increase than their ligands and selective to the cancer cells. However, when compared to the standard reference drug cisplatin, copper, and nickel complex were more active was observed. Similarly, the antioxidant activity of copper and nickel complex was found to be active antioxidant activity than other complex 26, 27.

TABLE 7: CYTOTOXIC STUDIES OF THE COMPLEX IN CANCER AND NORMAL CELL LINES

CONCLUSION: In the present study, synthesis and characterization of four mixed ligand complexes obtained by reacting isatin and 4-nitroaniline and isatin with 2,4 –dinitro aniline with respective metal chlorides in ethanol medium was carried out. Both the ligands being bidentate and potent donors were found be carbonyl oxygen and azomethine nitrogen atoms. Tetrahedral geometry was proposed for all the mixed complexes and the probable structure is shown in Fig. 3. 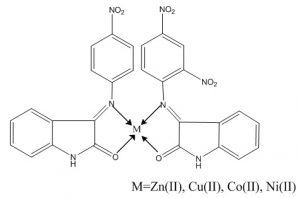 FIG. 3: PROPOSED STRUCTURE FOR THE COMPLEXES IS (TETRAHEDRAL GEOMETRY)

The metal complexes of Cu, Co, Ni and Zn showed significantly potent cytotoxicity against breast, colon and prostrate cancer cell lines. DPPH scavenging activity of Cu, Co and Ni complexes are found be higher than the standard ascorbic acid. Cytotoxic and antioxidant activities of metal complexes were found to be higher compared to the ligands.

ACKNOWLEDGEMENT: The authors are thankful to VGST, Government of Karnataka, Bharathiar University, Coimbatore, India for providing the necessary facilities to carry out the present work. We wish to thank Government Science College (Autonomous), Bengaluru for providing research facilities under UGC-CPE/MRP grants and REVA University for all the support.