ABSTRACT: The new Ru (II) complex [Ru(4-Et-py)4(dppz)]2+  (dppz = dipyrido phenazine) have been synthesized and characterized by different analytical techniques like elemental analysis, LC-MS,  1H NMR , 13C NMR. The interaction of this complex with calf thymus DNA has been explored by U.V. absorption spectroscopy, Fluorescence measurements, and viscosity measurements. Their photocleavage behavior towards pBR 322 and anti-bacterial properties of this complex was also investigated. The experimental results show that the complex binds with DNA by intercalation mode.

INTRODUCTION: Transition metal complexes with anticancer activity gained place in the chemotherapy of some cancers 1-3. While Platinum based drugs have been in clinical use for the past 30 years 4, their inherent toxicity often limit their use as the last option. Cisplatin, Carboplatin, Oxaliplatin etc. owe their activity to their capacity to intercalate nuclear DNA and prevent transcription.

The square planar, inert Pt(II) drugs are activated by slow hydrolysis of the anionic ligands and the antitumour properties of the metabolites are associated to their capacity to bind genomic DNA in the cell nucleus forming stable intrastand  crosslinks which then block replication or prevent transcription. Metal complexes carrying charge and containing planar aromatic ligands such as phenanthroline are used as probes 5-9.

Some other transitional metals also have the potential for intercalation of DNA and prevent growth in cancer cells. Chief among them is ruthenium. Ruthenium complexes have been widely investigated and two such complexes NAMI – A and KP – 1019 are under clinical trials for metastatic and colorectal cancers. Ru (II) polypyridyl  complexes  have  the possibility to become  anticancer agents 10-19  because they are  effective against  primary  tumours  and  easily absorbed, their cytotoxicity is relatively low (compared to Pt(II)). The ruthenium complexes exhibit Photocleavage as evidenced by spectroscopic methods and viscosity measurements 20-27. This has prompted us to synthesize  some novel asymmetric bidentate derivatives of ruthenium with  dipyridophenazine which shows quenching of luminescence in aqueous  media due to the interaction  of the phenazine  nitrogens with water  via -  hydrogen bonding or excited state  proton transfer 28, 29 and  their  ability  to bind  with  DNA  using physicochemical and spectroscopic  methods  has been investigated.

Now, we are reporting the synthesis, characterization of [Ru(4-Et-py)4(dppz)]  (Clo4)2.2H2O using different techniques.

The binding of this complex with CT DNA was explored using electronic absorption measurements, fluorescence measurements, viscosity measurements. Their photo cleavage behavior towards pBR 322 was studied. The antimicrobial property towards E. coli bacteria was also studied.

Synthesis:  ligands like phen-dione and dipyrido phenazine (dppz) were synthesized as per the reported procedures 32, 33.

Each set of data, when fitted to the above equation, gave a straight line with a slope of 1/ Kb (εa – εf).  Kb was determined from the ratio of the slope to intercept. The binding constants indicate that the complex binds more strongly.

The U.V. absorption measurement: The electronic absorption spectroscopy is the most common way to investigate the interactions of metal complexes with DNA 44-49. A metal complex binding to DNA through intercalation usually results in hypochromism and bathochromism, due to the intercalation mode involving a strong stacking interaction between an aromatic chromophore and the base pairs of DNA. It seems to be generally accepted that the extent of the hypochromism in the UV- Visible band is consistent with the strength of intercalative interaction 50-53. The absorption spectra of complex [Ru(4-Et-py)4(dppz)]  (ClO4)2 in the absence and presence of CT-DNA (at a constant concentration of complexes, [Ru] = 20μM) are measured. The absorption spectra of complex show three bands with comparable intensity as in fig. 5, lying in the range of 200- 600nm. The first one is a strong and broad absorption band centered at 360 nm, which is generally assigned to a singlet, metal to ligand transfer (MLCT). There are two narrow separated bands within the range of 265 - 255 nm and one strong and narrow band centered at 220nm, both of them are characteristic of the intraligand (IL) transitions. These assignments of absorption bands can be confirmed and analyzed in detail by TDDFT calculations (Time-dependent density functional theory (TDDFT)) in aqueous solution. With the increase in concentration of DNA, the absorption band of the complex display clear hypochromism. The spectral characteristics indicate that the Ru(II) complex  interact with DNA.

The intrinsic binding constants Kb of complexes were measured to be 1.4 x 105 M-1 respectively. The Kb values are in the same order of those bidentate [Ru(L)2(dppz)]2+ complexes. Where L= bpy, phen, dmb, dmp. This suggests that the complex most likely intercalatively bind to DNA, involving a strong stacking interaction between the aromatic chromophore (dppz) and the base pairs of the DNA.  It indicates that the ancillary ligands 4- Ethyl Pyridine enhance the DNA – binding affinity. The DNA- binding constant of complex shows that it has larger hypochromism value but smaller Kb value implying stronger binding to DNA. 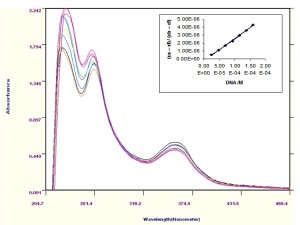 The hydrophobic environment inside the DNA helix restricts the mobility of the complex at the binding site. Emission quenching experiments using [Fe(CN)6]4-  as quencher may provide  further information about the binding of complexes with DNA, the emission of complex  was  efficiently quenched by [Fe(CN)6]4- as in fig. 6 & 7  and the plot was not linear which imply that the quenching process can be both dynamic and static 54.

However, in the presence of DNA, the Stern – Volmer plots are changed drastically and the emission intensity was hardly affected by the addition of anionic quencher. This may be explained by repulsion of the highly negative [Fe(CN)6]4-  from the DNA polyanion backbone  which hinders access of [Fe(CN)6]4- to the DNA bound  complexes 55.

The plot for the DNA bound complexes become linear, indicative of only dynamic quenching, which was consistent with the strong DNA – binding affinity of complex. The curvature reflects degrees of protection or relative accessibility of bound cations, a larger slope for the Stern – Volmer curve parallels poorer protection and low binding.

From the results, it was suggested that the complex has stronger DNA- binding affinity. 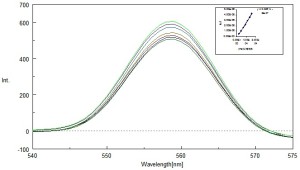 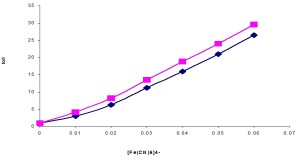 Viscosity studies: Viscosity measurements were carried out to elucidate the binding mode of the complex, by keeping [DNA] = 0.4mM and varying the concentration of the complex. The changes in relative viscosity of rod- like CT-DNA in the presence of [Ru(4-Et-py)4(dppz)]2+   were observed. From the figure it was observed that with the addition of increasing amounts of complex to the DNA the relative viscosity of DNA increases steadily.  The increased degree of viscosity, depend on the binding affinity to DNA. These results offer further proof that the complex effectively intercalates between the base pairs of DNA with high affinity which is inserted in fig. 8. 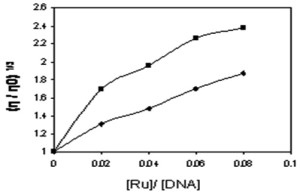 Photoactivated cleavage of pBR 322 DNA: There was substantial and continuing interest in DNA endonucleolytic cleavage reactions that were activated by metal ions 56, 57. The order of migration of plasmid DNA during agarose gel electrophoresis, the three forms of plasmid DNA  can be  used  to study  cleavage  induced  by radiation  at 365 nm. When circular plasmid DNA was subjected to electrophoresis, relatively fast migration was observed for the intact supercoil form (Form I).

If scission occurs on one strand (nicking), the supercoil will relax to generate a slower moving open circular form (Form II).  If both strands were cleaved, a linear form (Form III) that migrates between Form I and II will be generated 58. Fig. 9 shows gel electrophoresis separation of pBR 322 DNA after incubation with the complex and irradiation at 365nm.

No DNA cleavage was observed for controls in which complex was absent (lane 0), or incubation of the plasmid with the Ru (II) complex in dark. During irradiation experiments, the increasing concentration of Ruthenium complex result in gradual decrease in Form I with corresponding increase in Form II and formation of some Form III indicating cleavage.

Anti-bacterial activity: Theantibacterial screening effects of these complexes were tested against Escherichia coli bacteria by the well diffusion method 59, using agar nutrient medium inoculated with bacteria. The well was filled with the test solution using a micropipette and the plate was incubated at 35°C. The test solution was diffused and the growth of the inoculated bacteria was affected. The diameter of the inhibition zone against each concentration was noted. The increase in the delocalization of π- electrons over the whole chelate ring enhances the penetration of the complexes blocking of the metal binding sites in the enzymes of bacteria 60.

This complex also disturbs the respiration process of the cell and thus blocks the further growth of the organisms 61. [Ru(4-Et-py)4(dppz)] (ClO4)2 shows inhibiting activity against E. coli as shown in fig. 10. 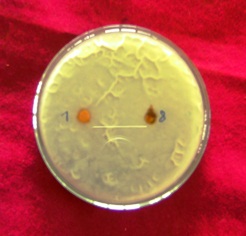 CONCLUSIONS: The study shows Ru(4- Et-py)4(dppz)]2+ compounds bind with DNA inter calatively resulting in antibacterial activity possibly due  to DNA  binding. Since, Ruthenium complex with Ethylene diamine was shown to exhibit anti tumour and anticancer activity. It is likely the novel ruthenium complexes have the potential for antitumour and anticancer properties 62-64.

ACKNOWLEDGEMENTS: We gratefully acknowledge the UGC, New Delhi for financial support in the form of major research project.