SYNTHESIS, CHARACTERIZATION OF NOVEL MIXED METAL TARTRATEC OMPLEXES AND STUDY OF THEIR IN VITRO ANTIMICROBIAL ACTIVITY

SYNTHESIS, CHARACTERIZATION OF NOVEL MIXED METAL TARTRATEC OMPLEXES AND STUDY OF THEIR IN VITRO ANTIMICROBIAL ACTIVITY

ABSTRACT: A series of six new mixed metal complexes of general formulation [MM12(L)n]xH2O, where M= Mn, Co, Ni, Cu, Zn, Cd,M1=Fe,  L= Tartrate ligand, x=1,5,6 and n = 3, are synthesized using tartrate as a bidented ligand. The newly synthesized complexes were characterized using various analytical techniques such as IR, XRD, TGA, Elemental analysis, magnetic susceptibility study etc. IR spectral data suggested that the bidentate ligand has coordination to both the metal ions through oxygen as donor atoms. The thermal behavior (TGA) of the complexes was studied; suggest the decomposition patterns were in good agreement with recommended formulae of the complexes. XRD technique revealed the presence of crystalline nature of all the studied complexes. The antibacterial activity of the metal complexes along with ligand was assayed against three bacterial pathogens viz. Bacillus Megatherium, Staphylococcus aureus, E-Coli, Pseudomonas and Proteus Vulgaris by well diffusion method. The bioassays of all the metal complexes showed a greater inhibitory effect in the form of broad activity spectrum than the individual ligand, which indicate an increased antimicrobial activity after the coordination.

INTRODUCTION: The discovery of Cisplatin, that is a coordinated drug has generate the great interest in coordination chemistry 3 and has now become a multidisciplinary area having a wide range of applications in medicinal chemistry such as anti-bacterial, Antifungal, anticancer, antiviral and anti-inflammatory actions 5, 9, 14, 15. The transition metal complexes can provide variety of properties based on their cationic nature, assorted three dimensional structural features, and the possibility to tune their redox potential through the choice of proper ligands 3, 8.

It has been observed that the metal complexes shows enhanced biological activity than those of either ligands or the metal ions which has been reported with several transition metal ions and variety of ligands 4, 5, 6, 7. The Literature survey reveals that the wide variety of Schiff based ligand metal complexes have been extensively studied over past few decades for their biological activity 9, 11, 12. Ever since it has been accepted that many of these complexes may serve as models for biologically significant species 10.

Still a widespread research has been going on to search the complexes with improved action mechanism against bacteria, with reduced toxicity of the metal ion in the form of a complex. Although a wide variety of metal-ligand complexes were studied for their antimicrobial activity, the literature survey reveals that there has been not much work done yet on combination of mixed metal-ligand complexes to study their biological activity.

In search of new potentially active metal complex and based on the above considerations, we have synthesized and characterized mixed metal tartrates, containing tartrateas a ligand which may coordinate with both metal ions through carboxylate and carbonyl oxygen as observed in case of complexes with metal ions such as Mn (II), Fe(II) Co(II), Ni(II) 1, 2. The interaction of metal ions with tartrate ligand shows improved antimicrobial activity compared to free ligands (not coordinated). In addition, the co-precipitation method of complex synthesis using water as a solvent is attractive offering reduced effluence, low cost and offer high yields in concert with simplicity in processing and management 1, 2.

We report here the synthesis, Characterization and antimicrobial activity study of mixed metal complexes which contain one fixed metal ion (Fe) along with a series of metal ions (Mn, Co, Ni, Cu, Zn, Cd) bonded together through bidentatetaratrate ligand. These mixed metal complexes were characterized by elemental analysis, IR, XRD, TGA and magnetic studies etc. The antimicrobial activity of the compounds was investigated systematically.

All the reagents and the hydrated metal salts (FeSO47H2O, MnSO4H2O, CoSO47H2O, NiSO46H2O, CuSO45H2O, ZnSO47H2O, and CdSO4) are of analytical grade, purchased from Merck and were used as received. The double distilled water was used as solvent for preparation of various solutions of metal salts and final complexes as well.

Synthesis and Characterization of metal complexes:

A simple co-precipitation method was used to prepare the complexes. The two metals salts aqueous solutions i.e. FeSO47H2Oand MnSO4H2O were mixed homogenously in a fixed molar ratio. The pH of the solution adjusted to slightly acidic condition by dilute H2SO4 to hydroxide formation of cations. In these mixture of metal salts the 10% aqueous solution of tartrate is the added slowly with constant stirring to get complete precipitation. The stirring is continued for next 30 minute by adding acetone in equal amount to the ligand solution. A colored product appeared on standing and cooling the above solution. The precipitated complex was, filtered washed with acetone and dried under normal atmospheric conditions and then stored in a desiccator over dried. All other metal complexes were prepared using this similar general procedure.

The Infrared absorption spectra of the ligand and metal complexes were recorded on a Shimadzuspectrophotometer from 4000 to 400 cm-1 using KBr pellets. The Powdered diffraction patterns of metal complexes were recorded using Regaku Mini flex diffractometer CuKα (λ=1.5405 Ao). The Gouy method were used to measure magnetic susceptibilities at room temperature using Hg[Co(SCN)4]as calibrant. The magnetic moments were calculated using standard formulae. The elemental analysis of C and H were performed by microanalytical technique. The percentage of metals was anticipated as per standard monograph for chemical analysis. The thermoanalytical measurements were obtained with Perkin-Elmer (Delta series-TGA7) instrument.

All samples studied under static atmosphere of air using 30-60 mg samples and providing heating rate upto10 deg/min in the range of ambient to 600oC. Thermo gravimetric analysis data for the metal complexes concealed that nearly 15% of the total mass of the metal complexes reduced between 450C to 2500C, followed by substantial decomposition up to 6000C that corresponds to the decomposition of the ligand leaving metal oxides as residue. The results obtained through all above instrumental analysis indicate the formation of binuclear metal complexes with adequate degree of purity for the bioassays experiments.

Above synthesized and well characterized complexes were for screened their antibacterial activity against some gram positive and gram negative bacteria. The obtained results were summarized and discussed below.

RESULTS AND DISCUSSION: All the synthesized metal complexes are powdered solid, colored and stable towards air and moisture at room temperature with good percentage yield (Table 1). There decomposition temperature is quite high, due to predicted neutral polymeric nature they are less soluble in common organic solvents.

The physical data of the compounds are summarized in the Table 2. Analytical date show that metal-metal chelates have1:2:3 stoichiometry respectively. So the general molecular formula of the synthesized complexes can be given as [MM12(L)n]xH2O, where M= Mn, Co, Ni, Cu, Zn, Cd, M1=Fe,  L= Tartatrate ligand, x=1,5,6 and n = 3

The IR spectral assessment of the ligand and its metal complexes had been used to discover the binding mode of the metal ions at donor sites of the ligand. IR spectra of metal-metal tartratesare given in Fig. 1 and all the characteristic absorption bands of the complexes are represented in Table 3. 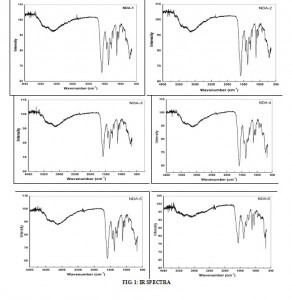 Shift in the positions of strong intensity band at 1750 cm-1 in the d-tartaric acid to lower wave numbers atνasy (OCO) 1591-1572 Cm-1 andνsy (OCO)1458-1375 Cm-1 for complexes reveals the coordination of both COO- groups present in the tartaric acid molecules to metallic ions. Furthermore, it was reported that the bidentate co-ordination of the carboxylate group with metal results in lowering of both ν (COO) frequencies due to drainage of electron density from carboxylate group to the metal ion. Thus on the basis of difference between the antisymmetric and symmetric (C=O) stretching frequencies of tartrate complexes, bidentate nature of attachment of ligand to metal ion can be predicted. The IR spectra show a strong and wide absorption band at 3430 Cm-1 assigned to the –OH vibration frequency of water and secondary alcohol groups. The presence of intermolecular hydrogen bonding in all compounds was confirmed by band width of IR spectra.

All tartrates are isolated as powder rather than a single crystal, due to which single crystal XRD studies are not possible for such complexes. However the powdered diffraction pattern reveals information about polycrystalline nature of the complexes (Fig.2). The observed d spacing values and particle size data are given in Table 4. 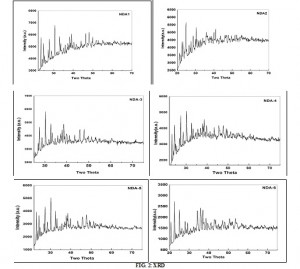 The TGA decomposition curves of all the complexes are show in (Fig.3) and the data summarized in Table 5. 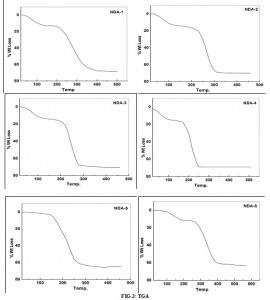 The thermogram of all compounds showed a continuous mass loss between 35to220o C indicating the water molecules loss from the complexes at this temperature. These mass losses are in agreement with theoretical values. The mass loss in the range of 235 to 5000C corresponds to decomposition of complexes and formation of respective ferrites (i.e. MFe2O4, where M= Mn, Co, Ni, Cu, Zn & Cd).

The synthesized metal complexes are screened for their in vitro biological activity. The ligand and the metal complexes were assayed against Gram-positive bacterial strains such as Bacillus Megatherium, Staphylococcus aureus and Gram-negative bacterial strains include E-Coli, Pseudomonas, Proteus vulgaris. A Well diffusion method was employed for the assessment of antibacterial activity. Each of the compounds was dissolved in sterile dilute hydrochloric acid and solutions of the 0.1% concentration were prepared individually. In a typical process, a well was made on agar medium inoculated with microorganism. The well was filled with the test solution using a micropipette and the plate was incubated 24 hrs for bacteria at 37°C. During this period, the test solution diffused and the growth of the inoculated microorganism was affected. The complexes potentiality was assisted by measuring the diameter of zone of inhibition in mm. The bactericidal investigation data of the compounds are summarized in Table 6. 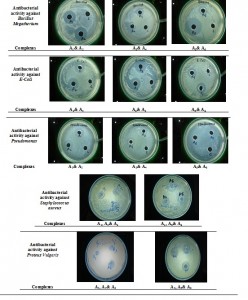 The antimicrobial results obtained revealed that both free ligand and its metal complexes show moderate to better antibacterial activity. As per the references this increased antimicrobial activity of metal complexes may be due to chelation of metal ions with ligand due to which delocalization of pi-electrons over the whole chelate ring takes place and thus increase its lipophilicity. This improved lipophilicity enhances the penetration of complexes into the lipid membranes of microorganisms and also disturb their respiration process. Due to which the further synthesis of proteins were get blocked, cause restriction in extension of growth of the organisms. On the whole assessment of observed data gave knowledge that the metal complexes are more biologically active in comparison with the ligand against all bacteria.

CONCLUSION: We report the successful synthesis of six mixed Fe(II)-M(II) coordinated complexes (Where M= Mn, Co, Ni, Cu, Zn, Cd) prepared by co-precipitation technique in the ratio of Fe2ML3. The results obtained can be summarized as follows: