ABSTRACT: An attempt has been made to synthesize Benzoxazines and conduct Molecular docking studies of the same using Cyclooxygenase-1. All the synthesized compounds are then tested for anti-inflammatory activity by using fresh egg-white induced Paw edema method. The synthesis of novel Benzoxazine derivatives has been achieved by the reaction of Salicylaldehyde with Para Amino Benzoic Acid (PABA), which affords a Schiff base. The Schiff base on reduction with Sodium borohydride yields a reduced Schiff base which on cyclization with different aldehydes gives different substituted Benzoxazine derivatives. All the synthesized compounds are spectrally characterized by Infra-red, Mass, and 1HNMR spectroscopic techniques. The paw volume of the rat is measured with Plethysmometer. The % inhibition of paw thickness is calculated using the formula [% inhibition = (control-test)/control × 100]. All the synthesized compounds exhibited anti-inflammatory activity.

INTRODUCTION: Benzoxazine 1 is composed of an oxazine ring, a heterocyclic aromatic six-membered ring with oxygen and nitrogen, attached to a benzene ring and the numbering is made in such a way that the oxygen position precedes the nitrogen. The three types of benzoxazines on this basis are shown in Fig. 1. 1, 3-benzoxazines attract more attention as they constitute an important class of both natural and non-natural products and are more biologically active compared to the other two types.

Acute inflammation is the initial response of the body to harmful stimuli and is achieved by the increased movement of plasma and leukocytes (especially granulocytes) from the blood into the injured tissues. Whereas, chronic inflammation, leads to a progressive shift in the type of cells present at the site of inflammation and is characterized by simultaneous destruction and healing of the tissue from the inflammatory process.

Chronic inflammation 14 leads to a host of diseases such as hay fever, periodontitis, atherosclerosis, rheumatoid arthritis, and even cancer (e.g., gallbladder carcinoma). Thousands of people throughout the world are facing severe stages of inflammation disorders due to lack of care in the initial stages of inflammation. Benzoxazine, a biologically, more potent heterocyclic compound, is found useful in the treatment of inflammation and blocking its further effects.

Therefore, the main objective of the research is to synthesize different types of benzoxazines with different substituted aldehydes and performing docking studies of the synthesized compounds with cyclooxygenase-1 (an enzyme released in the process of inflammation) for the treatment of inflammation.

MATERIALS AND METHODS: The experimentation is conducted in the year 2013 at Teegala Krishna Reddy college of Pharmacy. All the chemicals were obtained from S.D. Fine chem. Limited (Mumbai), Qualigens (Chennai) and Lancaster (USA). All the glassware is of borosilicate grade. The purity of the compounds was ascertained by TLC on silica gel-G plate. The Characterizations of synthesized compounds were done by spectral studies. Fourier transform infrared (FT-IR) spectra were taken in KBr on a Thermo Nicolet Nexus 670 Spectrophotometer. 1HNMR spectra were recorded on Bruker Avance 300MHz Spectrophotometer in CDCl3 with TMS as an internal standard. The chemical shift values are in delta (ppm). Mass spectra were recorded on Polaris Q apparatus (Thermo Electron), and the fragmentations were obtained by electronic impact (EI). The data is given as mass to charge ratio (m/z), and nominal masses were used for the calculation of molecular weights of the prepared compounds.

Step 1: Synthesis of Schiff Base: 1.37 gm (0.01 mole) of p-aminobenzoic acid and 1.22 gm (0.01 mole) (1.05 ml) of Salicylaldehyde were refluxed in Ethanol (50 ml) containing two drops of glacial acetic acid for 45 min. Crystalline solid obtained after cooling was recrystallized with solvent. The reaction procedure was depicted in Fig. 2.

FIG. 2: SYNTHESIS OF SCHIFF BASE

Step 2: Reduction of Schiff Base Obtained and Cyclization with an Aldehyde: Sodium borohydride (0.012 moles) was added to a solution of Schiff base (0.01 mole) in ethanol (20 ml) and refluxed for 1 h and then left aside for 30 min. To the reaction mixture, an aldehyde (0.015 moles) was added and refluxed for 2 h, and the progress of the reaction was monitored on TLC.

FIG. 3: REDUCTION OF SCHIFF BASE AND CYCLIZATION WITH AN ALDEHYDE

Spectral data of the synthesized compounds: 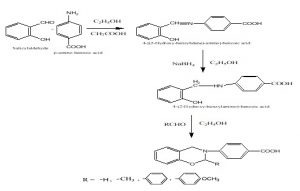 FIG. 4: SCHEME FOR THE SYNTHETIC PROCEDURE

The Physical data of the synthesized compounds are summarized in Table 1.

Acute Oral Toxicity (Acute Toxic Class Method): In this method, the toxicity of the different synthesized compounds were tested using a stepwise procedure, each step using three mice of a single sex. The mice were fasted before dosing (food but not water should be withheld) for three to four hours. Following the period of fasting, the animal should be weighed, and the synthesized drug was administered orally at a dose of 2000 mg/kg body weight. Animals were observed individually after dosing at least once during the first 30 min; periodically during the first 24 h with special attention given during the first 4 h and daily after that, for a total 14 days. The test procedure commences with a starting dose of 2000mg/kg body weight as per OECD-423 Guidelines.

Anti-inflammatory Activity by Paw Edema Method: The animal study was conducted with permission from the CPCSEA ethical committee with the number 1447/Po/a/11/CPCSEA. Wistar-albino rats were used for the study. The animals were fed with food and water ad libitum. The rats were maintained, and the experiment was conducted as per the norms of CPCSEA.

Experimental Procedure: Male or female Wistar-albino rats with a body weight between 100 and 150 g are used. The animals were acclimated to laboratory condition for seven days before commencement of experiments and were allowed free access to a standard dry pellet diet and water ad libitum. The animals are starved overnight. To ensure uniform hydration, the rats receive the test drug (novel benzoxazine derivatives) at a dose level of 100 mg/kg b.w. and 200 mg/kg b.w. Suspended in the 5% acacia suspension. Thirty minutes later, the rats are challenged by subcutaneous injection of 0.05 ml of 1% solution of egg albumin into the plantar side of the left hind paw. The paw is marked with ink at the level of the lateral malleolus and immersed in mercury up to this mark. The paw volume is measured with Plethysmometer immediately after injection, again after 1 h, 2 h, 3 h, and 5 h.

% inhibition is calculated by

The values are calculated by the Dunnett method by comparing all the compounds with control in One-way Analysis of Variance (ANOVA) and are expressed in Mean ± SEM (Standard error mean). 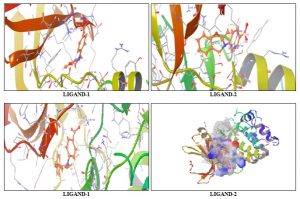 Acute Oral Toxicity: No sign of toxicity observed at 2000 mg/kg b.w. to the group of animals, the LD50 value of the title compounds expected to exceed 2000 mg/kg b.w. and represented as class 5 (2000 m/kg < LD50 < 2500 mg/kg). From the toxicity studies, the data revealed that all the synthesized compounds proved to be non-toxic at tested dose levels and well tolerated by the experimental animals as their LD50 cut of values > 2000mg/kg b.w.

The results obtained from the synthesized compounds with a dose of 100 mg/kg confirmed that maximum activity was obtained when R was substituted by a phenyl group (compound-3) with 70.80% inhibition. The title compound with a hydrogen (compound-1) substitution at R and the compound with substitution of a methyl group (compound-2) at R showed moderate activity with 60.22% and 51.82% inhibition respectively. The compounds with substitution of methoxyphenyl group (compound-4) at R showed mild activity with 37.59% inhibition. Based on the ‘P’ value, compound-3 showed higher significance from 1hr to 5 h when compared to control. The effect of standard & test compounds on Paw thickness and %inhibition of the synthesized compounds are shown in Fig. 6 and Fig. 7, respectively. The comparison of significance for the test compounds are summarized in Table 3.

The results obtained from the synthesized compounds with a dose of 200 mg/kg confirmed that maximum activity was obtained when R was substituted by a phenyl group (compound-3) with 74.09% inhibition. The title compound with a hydrogen (compound-1) substitution at R and the compound with substitution of a methyl group (compound-2) at R showed moderate activity with 65.33% and 54.01% inhibition respectively. The compounds with substitution of methoxyphenyl group (compound-4) at R showed mild activity with 45.26% inhibition. Based on the ‘P’ value, compound-3 showed higher significance from 1hr to 5 h when compared to control. The effect of the standard & test on Paw thickness and %inhibition of the synthesized compounds are shown in Fig. 8 and Fig. 9, respectively. The comparison of significance for the test compounds are summarized in Table 4.

CONCLUSION: Novel Benzoxazine derivatives were synthesized by modifying the benzoxazine nucleus with different aldehydes so that the therapeutic activity may be enhanced and was found to be succeeded. All the synthesized compounds are docked into the active site of the enzyme Cyclooxygenase-1 and are found to have a better binding affinity to the enzyme. Compound-3 showed a good docking score of -6.574335 when compared to the other compounds. The higher dose levels (200 mg/kg b.w.) of the synthesized compounds enhanced the anti-inflammatory activity when compared to lower dose levels (100 mg/kg b.w.) of the synthesized compounds. Compound-3 showed a higher significance from 1 h to 5 h at a dose of 200 mg/kg b.w as well as 100 mg/kg b.w. when compared to control. The compound containing aromatic substitution showed a greater activity compared to the compounds with aliphatic substitution. Compound-3 showed greater Pharmacological activity, compound-1 and compound-2 showed moderate activity, whereas compound-4 showed mild activity due to bulky groups and less binding affinity with cyclooxygenase-1. Hence, this research work justifies the molecular docking studies and anti-inflammatory activity of synthesized novel Benzoxazine derivatives.

The present research work leads to the recommendation that further for the development of better therapeutic agent for clinical assessment, detailed pharmacology and toxicology studies need to be performed in order to generate data on the potential short and long-term toxicities as well as affirmed pharmacological action.

The discovery and the applications of such synthetic drugs will play a role in human as well as veterinary medicine in the future.

ACKNOWLEDGEMENT: The authors offer a deep sense of gratitude towards IICT and Kelvin labs for their valuable support in providing spectral studies.