Categories Menu
Home » SYNTHESIS, ELECTROCHEMICAL AND ANTIMICROBIAL ACTIVITY OF SCHIFF BASE AND ITS NICKEL (II) COMPLEX

SYNTHESIS, ELECTROCHEMICAL AND ANTIMICROBIAL ACTIVITY OF SCHIFF BASE AND ITS NICKEL (II) COMPLEX

SYNTHESIS, ELECTROCHEMICAL AND ANTIMICROBIAL ACTIVITY OF SCHIFF BASE AND ITS NICKEL (II) COMPLEX

ABSTRACT: The present study is focused on the electrochemical behavior of glycine 4-bromo acetophenonimine (GBAPI) and its Ni(II) complex. In buffer solutions (Britton-Robinson universal buffer and phosphate buffer) of pH 3 - 9 range, using cyclic voltammetric technique. GBAPI is synthesized by the condensation of 4-bromo acetophenone and glycine amino acid (1:1 molar ratio). The complex is generated by the reaction of nickel (II) acetate and GBAPI in 1: 2 molar ratio in reflexing alcohol. The process is irreversible and diffusion controlled for both GBAPI and Ni(II) complex. The effects of change in pH, solvent and sweep rate are evaluated. Kinetic parameters (charge transfer coefficient (αn), diffusion coefficient (D01/2), rate constant (k°f,h) are calculated from cyclic voltammetric measurements. These compounds are screened for their antibacterial and antifungal activities and the results are compared with those of a standard antibacterial and antifungal drug.

INTRODUCTION: Complex of Schiff bases have not only found extensive applications in design and synthesis of organic molecules 1, but exhibit significant electrical conductivity, host-guest chemistry 2, sensors 3, biological activity 4 and analytical applications 5 -  9. A number of Schiﬀ base derivatives have shown interesting biological activities such as antibacterial, antifungal, anticonvulsant, antimalarial and anticancer 10 - 13. The electrochemical behaviour associated with electron transfer equilibrium and kinetics provides information on molecular structure and the environment of the basic process.

An electrochemical reaction mechanism is the step by step sequence of elementary steps, involving at least one outer sphere electron transfer, by which an overall chemical change occurs. Electron transfer is one of the important processes in organic chemistry and many organic reactions are driven by the electron transfer processes 14. Electrochemical technique is a novel alternative method in organic synthesis, where one can synthesize the desired compound by oxidation or reduction of the substrate 15 - 18.

The  electrochemical reduction is one of the greener approaches because it is pollution free as electrons may be regarded as one of the reagents and it reduces the use of at least one hazardous chemical reagent. Other advantages of this technique are specificity, selectivity and cost effectiveness 19. To investigate kinetics and mechanisms of the reactions electrochemical techniques are also very powerful and useful, provides alternative synthetic route 20 - 21. The mechanism of reduction or oxidation of carbonyl compounds in aqueous media has been studied 22. In this paper we are reporting synthesis, spectral analysis and cyclic voltammetric analysis of such type of glycine 4 - bromo acetophenonimine (GBAPI) and its Ni(II) complex.

Preparation of Schiff Base Ligand: Dry ethanolic solution of sodium (0.12 g, 4.5 mM) was added to the mixture of glycine and 4-bromo acetophenone in ethanol. The condensation product was filtered, washed with ethanol and ether, recrystallized with ethanol, and dried under reduced pressure. Sodium chloride formed during the course of the reaction was filtered off. The purity and characteristics of the amino acid-ketimine was examined by elemental analysis and spectral data.

The resulting mixture was then refluxed on water bath for 5 h. The complex formed was filtered, recrystallized with ethanol, finally washed with petroleum ether (60 - 80°C), the excess solvent was removed under reduced pressure. The greenish solid product obtained was recrystalized from ethanol. Molecular weights of the compounds were determined by the Rast’s camphor method. 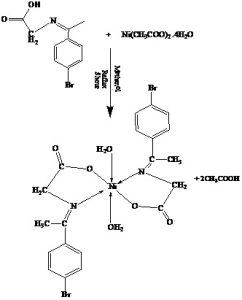 TABLE 1: ANALYTICAL AND PHYSICAL DATA OF LIGAND AND COMPLEX

Infrared Study: Absence of a υ(C=O) band (1740 cm-1) of ketone and presence of υ(C=N) band occurs at 1630-1638 cm-1 in the spectra of ligand indicates the condensation between ketonic group and amino group of amino acid. In comparison with the spectra of the GBAPI, the Ni (II) complex exhibited the band of ν(C=N) in the region 1600 -1620 cm-1, showing the shift of the band to lower wave number indicating that the nitrogen is coordinated to the metal ion. The broad and strong band present in the IR spectra of ketimine in the region 3200 - 3400 cm-1 disappear in the complex formation. The appearance of new bands in the region 450 - 470 and 505 - 584 cm-1 assign able to υM-O and   υM-N   respectively reflects the bonding of the metal ions to oxygen and nitrogen atoms 23 - 24.

Cyclic Voltammetric Study of GBAPI: In the typical cyclic voltammetric experiment, reaction mixture consisted of compound solution, methanol/ DMF and buffer solution of varying pH. The experimental solution was prepared as reported earlier 25. The solution was deoxygenated by nitrogen bubbling for 15 min prior to the experiments in order to remove dissolved oxygen from the media.

The electrochemical properties of the GBAPI was examined by cyclic voltammeter using a glassy carbon electrode as working, platinum as counter and Ag-AgCl electrode as reference electrode in methanolic /DMF medium containing phosphate buffer or BR buffer. Required potential, scan rates, current sensitivity, initial potential and final potential were applied to record current as a function of applied potential 26. 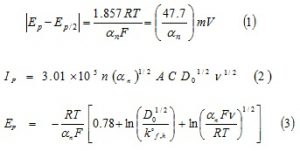 In-vitro Antibacterial and Antifungal Assay: The biological activities of synthesized GBAPI ketimine and its Ni(II) metal complex has been studied for their antibacterial and antifungal activities by agar and potato dextrose agar diffusion method respectively. The antibacterial and antifungal activities were done at 20, 40,60 and 80 μg/mL concentrations in DMF solvent using two bacteria (Pseudomonas aeruginosa and Escherichia coli) and two fungi (Aspergillus niger and P. Chrysogenum) by the minimum inhibitory concentration (MIC) method. These bacterial strains were incubated for 24 h at 37 ºC and fungi strains were incubated for 48 h at 37 ºC. Standard antibacterial (Ciprofloxacin) and antifungal drug (Ketoconazole) were used for comparison under similar conditions. Activity was determined by measuring the diameter of the zone showing complete inhibition (mm).

RESULTS AND DISCUSSIONS: Most of  the cyclic voltammograms were recorded with an initial potential (Ei) +700 mV and final potential (Ef) -1500 mV for GBAPI ketimine in the scan rate interval 50-250 mV/sec, keeping the pH and the concentration of solution constant. The cyclic voltammetric parameters for GBAPI ketimine are collected in Table 2 - 4 and Fig. 1 - 3 displayed the electrochemical behavior of GBAPI in DMF-BR, DMF-Phosphate and methanol-phosphate buffer.

TABLE 2: EFFECT OF SWEEP RATE ON VOLTAMMETRIC PARAMETERS OF GLYCINE 4-BROMO ACETOPHENONIMINE IN DMF-BR BUFFER AT DIFFERENT pH (3, 5 AND 7)

TABLE 3: EFFECT OF SWEEP RATE ON VOLTAMMETRIC PARAMETERS OF GLYCINE 4-BROMO ACETOPHENONIMINE     IN DMF –PHOSPHATE BUFFER AT DIFFERENT pH (5.8, 7 AND 8)

TABLE 4: EFFECT OF SWEEP RATE ON VOLTAMMETRIC PARAMETERS OF GLYCINE 4-BROMO ACETOPHENONIMINE IN METHANOL-PHOSPHATE BUFFER AT DIFFERENT pH (5.8, 7 AND 8)

TABLE 5: EFFECT OF SWEEP RATE ON VOLTAMMETRIC PARAMETERS OF Ni(II) COMPLEX OF GLYCINE 4-BROMO ACETOPHENONIMINE IN METHANOL-NaClO4 AT DIFFERENT CONCENTRATION 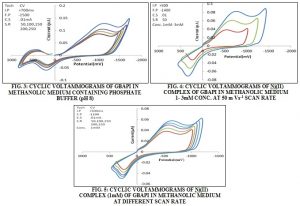 In all the electrochemical experiments, GBAPI gave one well defined reduction wave which is ascribed to the reduction of the azomethine group (-C=N- is reduced to the corresponding amino group NH3+or NH2+) in two electrone process 27. The voltammetric parameters measured over the range of scan rates investigated are presented in irreversible systems. The peak potential value shifted more negatively with an increase in the scan rate indicating the electrochemical process was irreversible. This means that under these conditions the electrochemical process is more irreversible. Peak current also increases as the scan rate increased for all the compounds. The linear nature of Ipc v/s ν1/2 plot with an intercept different to zero shows Fig. 6 that the reduction of GBAPI is diffusion controlled 28 - 29.

Effect of pH: The peak potential value of GBAPI is found pH dependent and shift towards more negative potentials indicating the involvement of protons in the electrode process. The consequence increase in the pH value increases the dissociation constant of the protonated species and these factors affect the protonation rate and consequently the peak potential values of the reduction wave shifts to more negative values. The pH (3 - 9) dependence of peak potential suggests that a fast proton transfer precede main electrode process.

In this process imine group (-C=N-) 4-bromo acetophenone glycine amino acid is reduced into amine group (-C=NH2+) in protic solvent such as CH3OH. Since all steps involved in reaction mechanism take place at the same potential, there occurs a single reduction peak corresponding to transfer of two electrons Scheme 3. 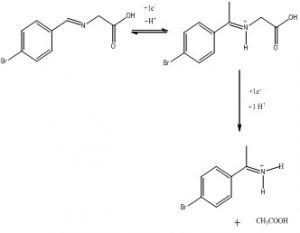 In the case complex anodic peak could not be realized, which indicated that the electrode process is irreversible in nature. The nature of electrode process was also confirmed from the peak potential values which shifted in the more negative direction with an increase in the scan rate. Peak current also increases as the scan rate increased for the compounds (from 0.0190 to 0.0521 µA).

Effect of Concentration: Effect of concentration on the reduction potential was studies by varying the concentration of compound from 1mM to 3mM at different scan rate. It was observed that the peak potential (Epc) shifted towards more negative values and the cathodic peak current was found to increase linearly as the compound concentration increased. The plot of Ipc v/s concentration shows linearity, further indicating the electrode process diffusion controlled. This kind of shift in Epc in the cathodic direction with increasing concentration (-507.90 shifted to -775.045) indicating that the reduction products are adsorbed over the electrode surface, this kind of shift has been predicted theoretically and observed experimentally 32.

In-vitro Antimicrobial Assay: The growth inhibition potential of GBPAI Ni II complex and its corresponding ligand towards the test organisms as discussed previously was studied. The results are summarized in Table 5 - 6. The complex is more growth inhibitory then its ligand. The presence of nickel in the complex is the main contributor to the activity. This enhancement in the activity of the metal complex can be explained on the basis of chelation theory. It is however, known that the chelating tends to make the ketimine act as more powerful and potent antimicrobial agents, thus inhibiting the growth of bacteria and fungi more than the parent ketimine (GBAPI) 33 - 34.

TABLE 6: ANTIFUNGAL STUDIES OF KETIMINE GBAPI AND ITS Ni(II) COMPLEX

CONCLUSION: Keeping in view of feasibility of the site of reduction and on the basis of cyclic voltammetric results, the reduction mechanism shown in Scheme 3 may be suggested for electro reduction of above studied glycine 4-bromo acetophenonimine (GBAPI). The mechanism finds supports from the Epc and Ep1/2 shift towards negative potential with pH, scan rate and concentration of compounds. GBAPI as well as its Ni(II) complex showed the irreversible nature of the reduction.

Antimicrobial activities of the complex is more as comparison of GBAPI, which indicate that’s metallation increases the biological activity.

ACKNOWLEDGEMENT: Authors thank to the Head, Department of Chemistry for providing the necessary laboratory facilities. Preeti Choudhary is thankful to UGC, New Delhi for financial assistance.