ABSTRACT: Liquid electrodes of polymers imprinted with Isopropamide (ISP) were synthesized based on precipitation polymerization mechanism. The molecularly imprinted polymer (MIP) and non-imprinted polymers (NIP) were synthesized using (ISP) as a template. In the polymerization process, 2-Hydroxyethyl meth acrylate (2-HEMA) and 2-Vinyl pyridine (2-VP) were used as monomers. Di-vinylbanzene (DVB) was used as cross-linkers and benzoyl peroxide (BPO) as an initiator. The molecularly imprinted membranes and the molecularly non-imprinted membranes were synthesized using dibutyl sebacate (DBS) and nitrobenzene (NB) as plasticizers in PVC matrix. Slopes and detection limit of the liquid electrodes are ranged at (52.23-58.94) mV/decade and (1.2 × 10-6 - 2.0 × 10-5) M, respectively. Response time was 60 sec. Liquid electrodes were filled with 10-1 M standard solution of drug and observed stable response for a pH ranged from 1.5 to 12 and with good selectivity for over several species. The new synthesis electrodes were successfully used for the analyte estimated in preparation pharmaceutical sample without any time-consuming pre-treatment steps.

INTRODUCTION: Isopropamide (R5) is a long-acting anticholinergic drug 1. It is used in the treatment of peptic ulcers and other gastrointestinal disorders involving hyperacidity (gastrointestinal acidosis) and hypermotility 2. Chemically, it contains a quaternary ammonium group 3. It is most often provided as an iodide salt but is also available as a bromide or chloride salt. It was discovered at Janssen Pharmaceutica in 1954. Molecularly imprinted polymers (MIPs), generally behave as synthetic antibody snob, have been appearing to be very promising candidates as highly selective adsorbents, because of the advantages inherent such as reusability, physiochemical, molecular specificity, stability and applicability in harsh chemical media 4.

MIPs are mainly based on the polymerization of functional monomers in the presence of a template molecule. The template is leached out leaving behind cavities which are integral in shape, size, and functionality to the template. 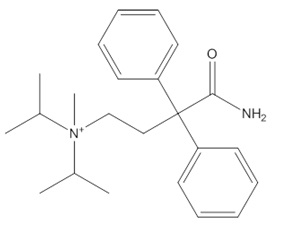 In recent years, MIP technology has developed to a valuable integral concept for biological activity with increased applicability in analytical chemistry, which show different and rapid methods for synthesis a polymer matrix with molecule-specific activity properties with applications ranging from purification of racemic mixtures to catalytic control and chemical sensing of complex chemical reactions 5. It was determination some drugs such as Ibuprofen 6 and Warfarin sodium 7 based on molecularly imprinted polymer method. In this study, imprinted polymer electrodes were prepared based on Isopropamide as a template in PVC matrix membrane and electrodes specification was studied.

Chemicals: Isopropamide was obtained from the State Company of Drug Industries and Medical Appliances (IRAQ-SDI Samara, Ajanta Pharma, India). The commercial Isopropamide tablets obtained from local stores is Salabid 5 mg and Isopropamide 5 mg. Nitrobenzene (NB) (99%), and dibutyl sebacate (DBS) (99%), as well as metal salts, were purchased from Sigma-Aldrich and were used as they were received. 2-Hydroxyethyl methacrylate (2-HEMA) (99%), 2- Vinyl pyridine (2-VP) (99%). Divinylbanzene (DVB) (99%), band benzoyl peroxide (BPO) (78%) was purchased from Sigma-Aldrich. The chemicals used in the search were possessed high purity does not need to purify.

The performance of the electrode was investigated by measuring the potential of Isopropamide solutions at room temperature with a concentrations range from 10-1 to 10-6 M. For the accuracy the potential of solutions were measured after the arrival of the internal and external solution to the equilibrium, then the potential recorded.

Synthesis of the Imprinted Polymer (MIP): Bulk polymerization method was used for the preparation of MIP. The template (ISP) of 0.4mmol was dissolved in a thick-walled glass tube (50 ml capacity) filled with 10 ml chloroform. Two monomers were used for the preparation of MIP, 2 mmole of 2-vinyl pyridine (2V-P) with 9.99 mmole divinylbenzene (DVB) as a cross-linker, the second MIP based on 4.6 mmol of 2-hydroxyethyl methacrylate (2-HEMA) as a monomer with 9.99 mmole divinyl benzene as cross-linker. The initiator of 0.2 mmole BPO was used. The solution was mixed in an ultrasonic water bath for 45 min 8, during this time the nitrogen gas has purged the mixture 9. After 45 min seals the tube and put the tube in 65 °C water bath to permit starting the reaction which continued for 2 days. The templates were removed by repeated washing the MIPs successively with 100 ml portions of 30% (v/v) acetic acid/methanol solution by using Soxhlet extraction. The polymer was dried at (35-45) ºC for (24-48) h. The polymers were then crushed and grounded using mortar and pestle and sieved to particles size 125 μm (using 100 mesh sieve). After the polymer was completely dried at ambient temperature, it was used as active material in the selective sensor membrane 10.

The non-printed polymer NIP was made in the same way but without the template drug. To prepare specific PVC membrane, high molecular weight PVC (0.17 g) mixed with the MIP (0.036 g) and the plasticizer (0.4 g) until the solution becomes homogenized, and then add THF (5-6 ml) and stirred. The solution was transferred to glass vessel based on glass board with 5 cm dia. circular section to let this mixture evaporate for 24 h. A glass tube contains a silver wire painted with silver chloride and filled with 0.1 M standard solution of Isopropamide was connected to one end of the tygon tube tightly while the second end of the tube was attached to 10 mm dia. 11 circular disk of the PVC membrane by using a concentrated PVC/THF solution as a glue in the purpose of producing the electrode. For the sake of clarity of the morphology and design of the particles and were used scanning electron microscope (SEM). The morphology of MIP and NIP membranes for Isopropamide before and after washing is showed by electron microscope in Fig. 2. A porous on the surface Fig. 2A about 20 μm may indicate the binding sides to the polymer. Fig. 2B shows clear holes about 50μm in sizes have been obtained and which were removed by Soxhlet extraction.

FIG. 2: SEM PHOTOGRAPH OF THE SURFACE OF MIP, A) AFTER WASHING B) BEFORE WASHING

Potential Measurements: Measurements were carried out in a 50 ml double walled glass cell, magnetic stirring was used to obtaining a homogeneous solution and under laboratory. The efficacy of the electrodes was scrutinized by measuring the potential of standard solutions for drugs prepared with a concentration range of 5 × 10−1 to 5 × 10−6 M by serial dilution. The slope, detection limit, and response time operative life were calculated from the calibration curve.

Characterization: The FT-IR spectra of the ISP, ISP-MIP, two imprinted polymers based on (2-Vinyl pyrdine) as a basic functional monomer (before and after the removal of the drug) and their nonimprinted polymers are shown in Fig. 3-5 for (ISP) drug. Table 1 summarized the main peaks that appeared in these figures. In spectrum (3) for drug we can see two sharp bands for asymmetrical and symmetrical N-H stretching and a band of 1664 cm-1 for carbonyl stretching of amide. While in the spectrum (4) before show band at 1728 cm-1 for ester carbonyl stretching and band and 1629 cm-1 for olefine C=C stretching group which does not exist in the drug spectrum. 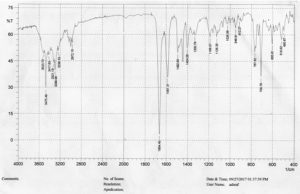 TABLE 1: THE MOST IDENTIFIED PEAKS OF FTIR SPECTRA FOR ISP-IMPRINTED POLYMER USING (2-VP) AS A FUNCTIONAL MONOMER

TABLE 2: THE MOST IDENTIFIED PEAKS OF FT-IR SPECTRA FOR ISP-MIP USING (2-HEMA) AS A FUNCTIONAL MONOMER

Spectrum (5) after showing the disappearance and N-H stretching bands and the carbonyl of amide stretching band which give a good indication for the elimination of drug molecule from the polymer. The spectra of FTIR for the ISP, ISP-MIP based on (2-HEMA) as an acidic functional monomer (before and after the removal of the template) and their nonimprinted polymers are shown in Fig. 6-7 for (ISP) drug. Table 2 summarized the main peaks that appeared in these figures.

Liquid Membranes Electrode: MIP based liquid electrodes, their concentrations range and slopes response to Nernstian equation have been investigated. The membranes of MIP made of the monomers 2-HEMA and 2-VP with a PVC matrix using two plasticizers DBS and NB. The internal solution was used 0.1M standard aqueous solution of the drug for all liquid electrodes. Experimental results of the synthesis of molecularly imprinted (MIP) and non-imprinted polymers (NIP) based on two monomers 2-HEMA and 2-VP indicate that both monomers can be used for the preparation of effective MIP for Isopropamide. The plasticizer is an essential part of the sensing membrane, which has important role as a solvent for the different components and determines the mobility of the analyte in membrane. Both of the plasticizers that are used, DBS and NB, are suitable for the fabrication of MIP-based Isopropamide electrodes.

The results of electrode specification were obtained from the calibration curves that listed in Table 3. The slopes of the electrodes ranged between 19.62-57.36 mV/decade and linear dynamic ranges between 1.2×10-6 - 2.0 ×10-5 M. In generally the preparation electrodes have a short response time (about 60 sec) mostly at high concentrations.

The values listed in Table 3 also indicate the electrodes IT, and IVT gives good results; therefore, the liquid electrode was used to determine both drugs in pharmaceutical samples.

TABLE 3: PARAMETER OF ISP-MIP ELECTRODES BASED ON DIFFERENT PLASTICIZERS

Influence of pH: The effect of pH on the potential values of the four electrodes was studied over pH range from 1.5 to 12 and adjusting the pH by adding drops of 0.1 M HCl and 0.1 M NaOH to the aqueous solutions of the drugs and the obtained potentials at each value were recorded.

Response Time and Life Time: The response time for all ISP-MIP electrodes was obtained from the dynamic potential response at a concentration range between 1 × 10-6 - 1 × 10-1 M by measuring the time required to reach 95% equilibrium potential. The results indicate that the response time of the electrodes was approximately 48.7 sec for the solution of Isopropamide at high concentration 10-1 M and about 64.3 sec at low concentration 10-6 M. The electrode lifetime was obtained by measuring the slope periodically from calibration curves for ISP-MIP during 30-50 days as shown in Table 5.

Where, the interfering ions potential and KA, B values are indicated in plus the selectivities headed for the studied species are seen in Fig. 13-16.

Quantitative Analysis: The accuracy of electrodes IT and IIIT were measured by determining Isopropamide in synthetic solutions of 5×10-3 and 5×10-4 M using the standard addition method. Excellent results of % recovery were obtained in the range 94.95 to 105.6. 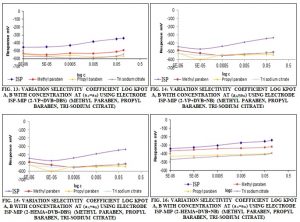 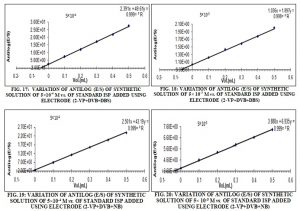 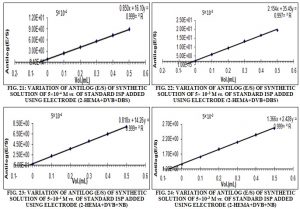 TABLE 6: RESULTS OF RECOVERY AND STANDARD DEVIATION OF COMMERCIAL DRUGS OBTAINED BY USING MEMBRANE IT, IIIT

Direct method and standard additions method (SAM) was applied for the determination of Isopropamide in commercial pharmaceutical tablets (Salabid 5 mg, Isopropamide 5 mg) obtained from local stores using membrane IT, IIT, IIIT, and IVT. The values of the % recovery Table 6, 7 were in a good agreement with the value given in British Pharmacopoeia 14. There is no interference of all species on electrode response; therefore, the values of recovery obtained by the standard additions method were in good agreement with the results of the direct method.

CONCLUSION: The construction of molecularly imprinted electrodes sensors (MIP) using Isopropamide as a template and divinylbenzene (DVB) as cross-linkers and (2-vinyl pyridine (2V-P), and 2-hydroxyethyl methacrylate (2-HEMA) as monomers in different plasticizers. Results of MIP that show high sensitivity, reasonable selectivity, fast static response, long-term stability, and applicability over a wide pH range were obtained by using electrode based on DBS and NB plasticizers. Good results of recoveries were obtained for the determination of Isopropamide in the commercial tablets in comparison with the British Pharmacopoeia.