ABSTRACT: A new series of s- triazine based chalcones have been synthesized by the temperature controlled reaction. The first substitution occurs at low temperatures (0°C), the second substitution at approximately at room temperature (25-30°C) and the third at elevated temperatures (70-100°C). This property allows substitution of three different neucleophiles onto the same triazine core which provides a vast array of possible triazine derivatives.

INTRODUCTION: Heterocyclic compounds are of immense significance due to their wide spectrum of pharmacodynamic applications. These compounds have attracted the attention of chemists and biologists due to their varied nature of physicochemical and pharmacological activities.1 The most widely studied application of heterocycles is in the preparation of biologically active and medicinally important molecules. Modern drug discovery focuses on the synthesis of specific biomolecular targets, which invariably contain a heterocyclic component.2-10 A key challenge in the synthesis of such targets continues to be the development of new pathways and improvement of existing pathways. Literature survey shows that synthesis of pyrazole and isoxazole derivatives has been a subject of consistent interest because of the wide applications of such heterocycles in the field of pharmaceutical as well as agrochemical industry.

The isoxazoles and pyrazoles are one of the key nitrogen and oxygen containing five-membered heterocycles that possess significant roles in the medicinal chemistry and have been reported to exhibit various pharmacological activities likes anti-viral2, anti-tumor3, anti-convulsant4, analgesic5, antioxidant6, anti-depressant7, herbicidal8, insecticidal9, fungicidal10, anti-bacterial11, anti-microbial12 cyclooxygenase inhibitory and anti-inflammatory13 activities. The isoxazoles and pyrrazoles have also been reported to possess crop protection properties or have some other industrial utility14. Various pharmacologically important isoxazoles with anti-diabetic, anti-parkinsonian, and anti-hypertensive activity have also been reported 15. Isoxazoles are unique in their chemical behaviour not only among heterocyclic compounds in general but also among the related azoles. Isoxazoles functionalized with an additional nitrogen-containing group have seen many applications16.

As the main study in the thesis centers around to incorporate in the s- triazine molecule the 1,5- benzodiazepine nucleus and other moieties and fragments which have the previous history of being biologically active, on this premise that their presence in tandem in a single molecular framework of this nucleus could contribute significantly to the biological efficacy in the resulting materials, in this context it seems necessary in the account to follow to present a brief review of biological aspects and the synthetic aspects of s-Traizines and 1.5-benzodiazepines.

The quest to develop more reliable and suitable drugs is always very fascinating and challenging. A number of drugs containing simple heterocyclic or a combination of different heterocyclic moieties have been in use since a long time. Among them 1,3,5-triazines represent a widely used lead structure with multitude of interesting applications in numerous fields. This simple molecule is well-known in organic chemistry and has been used in a variety of applications as its 2,4,6-mono-, di- or trisubstituted derivatives bearing different substituents. Nitrogen containing heterocycles reveals that these form important constituent of a wide variety of products with plethora of pharmacodynamic applications1-6.

s-Triazine are endowed with a wide array of useful pharmacological properties including microbial and anti-inflamatory properties. It was aimed in the present work first to substitute chlorine atoms at different temperature by different neucleophiles.  In the synthetic strategies which were envisaged in the present work, the s-triazine molecule has been selected with this idea in mind, that this molecule on one hand was very biologically active and on other hand it could provide a tempelate to hold the three biologically active pharmacophores together in the same molecule.

Condensed heterocyclic systems containing imidazole, benzimidazole, oxadiazole, thiadiazole, pyarazole, isoxazole, pyrimidine, diazepine, oxazepine, thiazepine nuclei have attracted the attention of chemists, on account of the significant medicinal properties associated with them. In view of the prodigious range of activities of these compounds, it was considered worthwhile in the present work to undertake investigation on the synthesis of condensed nitrogen-sulfur heterocyclic systems containing above nuclei fused to the s-Triazine neuleus. It was hoped that synthesis of these condensed heteocyclic systems and evaluation of their biological properties would provide a rational approach to the study of structure activity relationship of these molecules.

The triazine structure is a  heterocyclic ring, analogous to the six-membered  benzene ring but with three carbons replaced by nitrogens. The three isomers of triazine are distinguished from each other by the positions of their nitrogen atoms, and are referred to as  1,2,3-triazine (1), 1,2,4-triazine (2), and  1,3,5-triazine (3) . Triazines are prepared from 2-azidocyclopropene through thermal rearrangement (1,2,3-triazine), from 1,2-dicarbonyl compound with amidrazone by condensation reaction (1,2,4-triazine) and from cyanic acid amide by trimerization (1,3,5-triazine).

This process is used for the incorporation of various nucleophiles 47. As a general rule, which varies with the reactivity of the neucleophile chosen, the first substitution occurs at low temperatures (0°C), the second substitution at approximately at room temperature (25-30°C) and the third at elevated temperatures (70-100°C) (Fig. 1). This property allows substitution of three different neucleophiles onto the same triazine core which provides a vast array of possible triazine derivatives. In view of the impressive biological activities shown by cyanuric chloride, it was anticipated that incorporation of pyrimidine molecule to the cyanuric chloride neucleus could form the novel biologically relevant molecules with widespread applications as therapeutics. Claisen-Schmidt condensation and temperature controlled reactions played a crucial role in the establishment of variety of organic molecules of biological importance. Encouraged by the impressive bioactive profiles of s-triazine, together with pyrimidines, it was considered of interest in the present work to explore the possibility of incorporating these moieties together in the same molecule, on the premise that their presence in the same molecular framework could contribute significantly by providing an additive effect on the overall bioefficacy in the resulting materials. 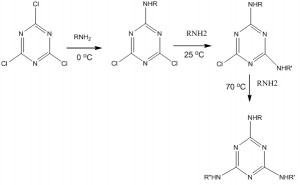 Fig.-2:   REMOVAL OF CHLORINE FROM S-TRIAZINE

In recent years, s-triazine compounds have been studied extensively and have been the subject of many reviews. s-Triazine derivatives possess biological activities such as anti-plasmodial, antitumor, anticancer, herbicidal, anti-inflammatory, antifungal, anti-protozoal, antimalarial, and anti-microbial. It clearly establish that s-triazine framework form an important structural core in many synthetic drugs. In addition to the interest in s-triazine as biologically active materials, these have also found important applications in material sciences.

Triazine based materials as electroluminescent devices, non-linear optics and fullerenes are some remarkable examples which have been reported in recent years. Triazines are also useful as chromophore groups in second-order optical materials. Some triazine family of compounds are used in pharmaceutical industry as coupling agents for the synthesis of peptide in solid phase as well as in solution and as side chain of antibiotics.  Some of s-triazine such as hexamethylmelamine (HMM) and 2- amino-4- morpholino-s-triazine have been used clinically due to their antitumor properties13 to treat lung, breast and ovarian cancer respectively. Antiproliferative activity of the synthesized l,2,4-triazolo[1,5-a][1,3,5]triazines were evaluated against breast, colon and lung cancer cell lines.

The highest antiproliferative activity in the series was found for 2-(pyridine-3-yl)-7-(4-trifluoro methylphenyl)-6,7-dihydro[1,2,4] triazolo [1,5-a][1,3,5]triazin-5,6-diamine.14s-Triazine chemistry has undergone a revitalization recently due to the usefulness of melamine derivatives as precursors of a variety of oligomers, polymers, as scavenging resins, components of host—guest, superstructure assemblies and ligand scaffolds for catalysis, in medicinal chemistry, in encapsulation of anticancer drugs and reduction of its toxicity. 1, 3, 5-Triazine derivatives have proven their great potential in the rising area of material chemistry, both for their their 7r-interaction abilities, and for their aptitude to be involved in intricate H-bond networks. They have been found to possess Anti-cancer, Antifungal and Antibacterial, Anti-HIV, Anti- malarial, Antidepressant, Antihypertensive Antihistaminic, Diuretic and Anti-inflammatory activities. 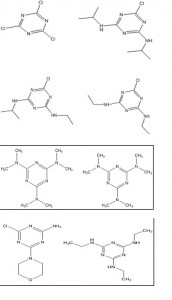 2,4,6-Trisubstituted - (dimethylamino) - 1,3,5-triazine is an antitumor agent known as altretamine used in the treatment of ovarian cancer. Further reports have demonstrated a number of derivatives of 2-aryl amino-4-(4-methoxy anilino)-6-(4-chlorophenyl/phenyl hydrazido)-1,3,5-triazine having anti-bacterial activity. Another compound 4,6-bis-allylamino-1,3,5-triazin-2-yl derivative exhibits reverse acquired resistance to anti-cancer and anti-malarial agents.

1,3,5-Triazine-2,4,6-triamine is reacted with formaldehyde to from a very durable thermoset resin. Benzoguanamine (2,4-diamino-6-phenyl-1,3,5-triazine) is used to increase thermoset properties of alkyl, acrylic and formaldehyde resins. Triazines are also useful as chromophore groups in colorants and chlorine attached in triazine compounds undergo nucleophilic substitution reactions well with hydroxyl groups in cellulose fibers.

CONCLUSIONS: Triazine derivatives are very important class of compounds having versatile use. They are not only being used for treating various diseases but are also used for various different purposes like in formulating bactericide and fungicide, as preservatives in oil field applications. They are also used as disinfectant, industrial deodorant and biocide in water treatment. They have been used as bleaching agents.

ACKNOWLEDGEMENTS: The author is thankful to the Dean & Head of Department of Chemistry, Banasthali University for their kind support to carry out this project.