INTRODUCTION: Cefotaxime Sodium is sodium 7-[2-(2-amino-4-thiazolyl) glyoxylamido]-3-(hydroxymethyl)-8-oxo-5-thia-1-azabicyclo [4.2.0] oct-2-ene-2-carboxylate 72 (Z)-(o-methyloxime), acetate (ester) with molecular formula C16H16N5NaO7S2 1. Cefotaxime is a third-generation parenteral cephalosporin antibacterial used in the treatment of infections due to susceptible Gram-positive and Gram-negative bacteria, including infections of the abdomen, bones and joints, CNS, skin and skin structure, genito-urinary tract (including gonorrhoea) and respiratory tract, in gynaecological infections, and in early Lyme disease 2, 3. Cefotaxime has a pKa of 3.4. Cefotaxime Sodium is freely soluble in water and slightly soluble in alcohol 4.

This antibiotic displays a high antimicrobial potency, a broad antibacterial spectrum, high resistance against the action of beta-lactamases, as well as a low index of side effects and lowered toxicity profile compared to the predecessors 5. Cefotaxime contains a 2-aminothiazol-4-yl moiety linked to position 7 of 7-amino cephalosporanic acid (7-ACA) through a methoxyimino acetamido bridge. This moiety can be introduced either by acylation of 7-ACA either with (Z)-2- (2-aminothiazol-4-yl)-2-methoxyimino acetic acid (ATMA) suitably activated or by reaction in a modified form, such as acid chloride, anhydride, etc. The high reactivity of these derivatives makes it necessary to protect and de-protect the amino function of ATMA, to avoid the formation of side products. The development of alternative forms for ATMA, such as esters and: or amides of the hydroxybenzotriazole (HOBT) and different thioesters, allowed a selective and advantageous acylation of 7-ACA, without necessity of blocking the amino function of ATMA 6-9.

As a general method for the synthesis of Cefotaxime, used most frequently was direct coupling of 7-aminocephalosporanic acid (7-ACA) with S-benzothiazol-2-yl(2- amino- 4-thiazolyl)(methoxyimino) thioacetate (MAEM) developed by Lonza. However, difficult removal of benzothiazole at the end of the reaction motivated researchers to devise alternative methods 5.

Preparation of DAMA: Weighed 24.1g of ATMA [(Z)-2-(2-aminothiazol-4-yl)-2-methoxyimino acetic acid], 17.2 g of DHP [O, O-diethyl O-hydrogen phosphorothioate] and dissolved in 105 ml of isopropyl alcohol. 4.2 ml of Triethylamine was added to this mixture and stirred well for 6 hr at room temperature to form a precipitate. This precipitate was isolated after filtration as a white solid. A schematic diagram is shown on Fig. 1. 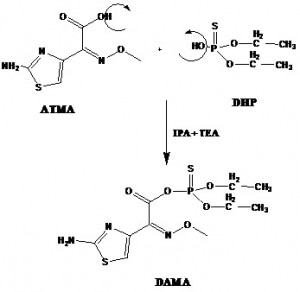 Preparation of Cefotaxime Acid: The process was carried out at room temperature. The process monitored with intermittent samples and analyzed by using HPLC. Validated related substances method of Cefotaxime Sodium for injection was used to test the potency of the material. Cefotaxime acid purity was found to be 95% after completion of 5 hrs of reaction. Weighed 20.4 g of 7-ACA in 201ml of Chloroform, mixed well to form a suspension. This suspension was cooled to 10°C and 19 ml of TEA was added and stirred well. The mixture was heated to room temperature and 31.1g of DAMA was added and stirred continuously with the help of mechanical device for 5 hrs.  To the above mixture, 500 ml of purified water and 35 ml of methanol was added, mixed well and pH was adjusted to 3.5 by using glacial acetic acid. The mixture was cooled down to 5°C and allowed to form a precipitate. This precipitate was filtered and washed with water and methanol several times. The filtrate was dried at 45°C for 1hr. A schematic diagram is shown on Fig. 2. 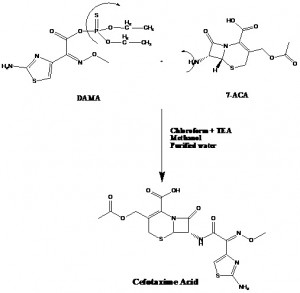 Preparation of Cefotaxime Sodium: To the dried material of Cefotaxime acid, a mixture of 50 ml of methanol and 9.2 g of sodium 2-ethyl hexanoate was added. This solution was treated with 3.1g of activated carbon charcoal and stirred for about 30 minutes. The solution was filtered and successful washings of the solution were done by using 500 ml of purified water. The filtrates were dried. The dried residue was dissolved in 60 ml of methanol and mixed with 1 liter of ether to form a precipitate. The precipitate washed with purified water several times and filtered under vacuum. The residue was dried for 5 hrs at 45°C. A schematic diagram is shown on Fig. 3.

RESULTS AND DISCUSSION: Cefotaxime is conspicuous as a third generation Cephalosporin antibiotic recognized even in public, the advent of β-lactam antibiotics marked a distinctive milestone in the pharmaceutical history. A new and simple alternate synthesis procedure was followed to synthesis Cefotaxime from isolable activated ester, diethyl thiophosphoryl [(Z)-(2-aminothiazol-4-yl)-2-(methoxy imino) acetate (DAMA) and 7-ACA (7-Aminocephalosporinic acid). 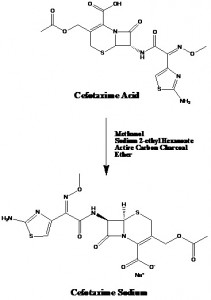 CONCLUSION: Cefotaxime Sodium was synthesized from isolable activated ester, diethyl thiophosphoryl [(Z)-(2-aminothiazol-4-yl)-2-(methoxyimino) acetate (DAMA) and 7-ACA (7-Aminocephalosporinic acid) using chloroform as a solvent. The synthesized material was identified by Infrared spectroscopy and High performance Liquid Chromatography (HPLC) method. The purity of Cefotaxime Sodium was found to be 98.4 % when analyzed by validated HPLC method. Further works are to be carried out to optimize the yield and structure to be confirmed further by doing Mass, 1H-NMR, 13C-NMR and Elemental Analysis.