ABSTRACT: Metals are able to form a large number of oxides. These metal oxides play an important role in many areas of chemistry, physics and material science. An important metal oxide known as magnesium oxide (MgO) having good reactivity is widely used in producing electronics, catalyst, ceramics, oil, paint etc. Magnesium oxide nanoparticle is non-toxic and need a small amount, so it is suitable for the development of flame-retardant fiber additives. In addition, nano magnesium oxide added in fuel can inhibit corrosion. Spherical shaped Magnesium oxide nanoparticles were successfully synthesized by sol-gel technique at room temperature using magnesium nitrate and sodium hydroxide as a precursor. The morphological investigation of MgO nanoparticles was done by various analytical techniques. X-ray Diffraction (XRD) indicates the crystallinity and crystal size of MgO nanoparticle. Transmission electron microscopy (TEM) tells about the particle size and morphology. Fourier transform infrared microscopy was used to get the infrared spectrum of the sample indicating powdered composition of the sample. UV-Visible spectroscopy was used to know the optical properties of the sample. Result confirms that brucite phase magnesium hydroxide gets converted to magnesium oxide periclase phase at room temperature.

INTRODUCTION: In recent year, nanoparticles have attracted a great attention because of their unique physical and chemical properties such as higher damping property, mechanical stability and high strength with good thermal conductivity 1. Metal oxide nanomaterials having high surface area have attracted considerable interest for scientific research due to their applications in the field of optical electronics, sensing devices and nano electronics 2.

The growing importance of high surface reactivity, chemical stability and thermal stability of MgO makes it a promising material for the application in sensor, catalysis, paint, additives etc. Researchers have focused more on the synthesis of both nanoparticles and nano composite of MgO due to their application in advanced technologies 3.

MgO is an important inorganic oxide which has been widely used in many fields 4. It is a semiconductor which crystallizes in the rock salt/ sodium chloride type cubic structure 5. Many synthesis processes such as sol-gel, hydrothermal, flame spray pyrolysis, combustion, aqueous wet chemical, surfactant and chemical gas phase deposition methods have been studied for the synthesis of MgO nanoparticles 6. Many physicochemical techniques are also there to construct nanosized MgO particles 7. The size and morphology of oxide particle can be controlled by many parameters such as pH, ionic strength, temperature of precipitation and different calcinations temperature 8. Over the past decades, various precursors were used in the synthesis of nanosized MgO resulting in multiple morphologies. Precursors that can be obtained from the synthesis methods take many forms such as magnesium hydroxide 9, magnesium carbonate 10 and basic magnesium carbonate 11.

Various fabrication techniques are also employed to synthesize MgO nanoparticles having their own advantages and disadvantages 12. Spherical shaped magnesium oxide nanoparticles were synthesized successfully by sol-gel method using magnesium nitrate and sodium hydroxide 13. A sol-gel method is an important technique for the formation of magnesium hydroxide followed by annealing at room temperature to form MgO. After synthesis of MgO nanoparticles, the study of structural, morphological and optical properties was carried out by using techniques such as XRD, FTIR, TEM and UV visible spectroscopy. The present work was aimed to synthesis of MgO nanoparticles chemically and their characterization at room temperature.

Appearance of white precipitate in the beaker shows the formation of magnesium hydroxide. The pH of the solutions was 12.5, as measured by the digital pH meter. Filtered precipitate washed with methanol is dried at room temperature. Washing with methanol removes ionic impurities. The dried white powder was annealed in air for one to two hours to obtain MgO powder (Fig. 1). 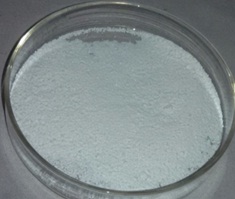 UV-visible Spectroscopy: UV-visible spectroscopy is used to discuss the optical properties of a sample. A monochromatic light is passed through the sample and the amount of light being absorbed by the sample is measured. At different wavelength, absorption of light by sample varies. It follows Beer-Lamberts law which states that absorption is directly proportional to the incident radiation and concentration of solution.

Fourier Transform Infrared Spectroscopy (FTIR): It is a technique used to obtain an infrared spectrum of absorption of a sample which may be in any form (solid, liquid or gas). The goal of FTIR is to measure how well a sample absorbs light at different wavelength. FTIR measurement of  magnesium oxide nanoparticles shows different peaks at different levels which corresponds to particular functional group and stretch present in it.

X-ray Diffraction: XRD is a conventional technique used for phase identification of a sample possessing crystallinity. It also provides information on unit cell dimensions. The resulting material is ground, homogenized, and bulk composition is determined. It is based on Bragg's law which relates the wavelength of radiation with the diffraction angle and lattice spacing in crystalline sample.

Transmission Electron Microscope: It is used to determine the size of a nanoparticle. TEM is a microscopic technique in which a beam of light is passed through an ultra thin specimen. The interaction of electrons with the specimen results in formation of image which is then magnified and focused onto an imaging device, such as fluorescent screen or CCD camera. TEM analyze the quality, shape, size and density of nanoparticle at high resolution. Nanoparticle can have different shapes, but NPs of magnesium oxide have spherical shape.

Fourier Transform Infrared Spectroscopy (FTIR) Analysis: The composition of the sample was analyzed by the FTIR measurement. The MgO powder was mixed with potassium bromide and a pellet is made which was used for infrared spectroscopic measurement at room temperature: The absorption band at 1638.01 cm-1 indicates the bending mode of vibration in water (H2O) and the broad absorption band at 3427.50 cm-1 indicates the stretching mode of vibration in hydroxyl (OH) group. The peak at 1051.94 cm-1 is due to adsorption of CO2, whereas peaks at 827.78 cm-1   attributes to different Mg-O-Mg vibration modes of MgO (Fig. 3). FTIR was done at Pharmaceutical Department, MDU Rohtak. 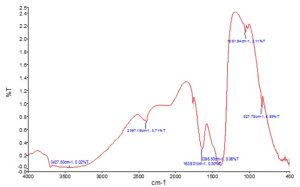 UV-visible Spectral Analysis: The optical properties of the MgO NPs were studied by means of the UV-visible absorption spectra in wavelength range of 200 - 1000 nm. The maximum absorption band of MgO NPs was found at 230.3 nm (Fig. 4).

It has been found that firstly the absorbance decreases with an increase in wavelength. UV-Visible spectroscopy was done at Zoology Department, MDU Rohtak. 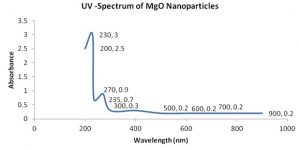 X-ray Diffraction (XRD) Analysis: The crystal structure of MgO nanoparticle was determined by XRD analysis. From the peak width and intensity the small particle size and better crystallinity can be easily seen. The peaks in XRD pattern of the prepared MgO sample is observed at 2θ -19.02, 29.70, 38.31, 51.11 and 59.98 (Fig. 5). XRD was done at Chemistry Department, MDU Rohtak. Average particle size of the nanoparticle was determined using Debye - Scherrer equation and it was found to be 22 nm. 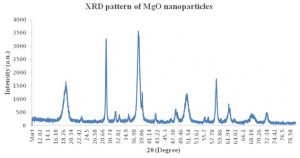 Transmission Electron Microscopy (TEM) Analysis: TEM is a technique used as the principle characterization for the direct observation of nanoparticles generated. The size of MgO nanoparticles was found 0.2 µm (Fig. 6) and 100 nm (Fig. 7). 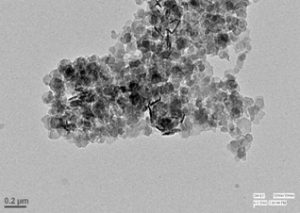 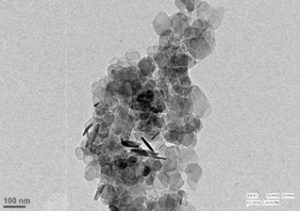 CONCLUSION: In the present work, MgO was successfully synthesized by liquid phase method i.e. sol-gel technique as this technique is simple, fast and effective. Magnesium oxide nanoparticles were chemically synthesized using magnesium nitrate as a precursor. Shape, size and other characteristics of nanoparticles are characterized by various analytical techniques. FTIR measures infrared intensity v/s wavelength of light. It determine the nature of functional groups and structural features of biological extracts with nanoparticles. It shows different peaks corresponding to different functional groups.

XRD is a conventional technique which is used to understand crystallographic structure and morphology. From UV-visible spectroscopy, optical properties of MgO nanoparticles were known. TEM is considered as the best tool in confirming the shape and size of nanoparticles. Magnesium oxide nanoparticles have various applications in different fields such as oil, paints,

ceramics, medicine, drugs etc. It is used as an additive in heavy fuel oils reflecting and anti-reflecting coatings in optics.