INTRODUCTION:Six-mercaptopurine (6-MP) is used in the maintenance therapy of acute lymphoblastic leukemia and it also displays activity against acute and chronic myelogeneousleukemias 1, 2. The clinical use of the thiopurines against solid tumors has been limited by severe bone marrow toxicity 3.

Resistance to the thiopurines was observed and it may be caused by deficiency or complete lack of enzyme hypoxanthine guanine-phosphoribosyltransfersae (HGPRT) 4 and increased levels of glutathione have been linked with drug resistance 5. One promising aspect for improving the distribution of (6-MP) appears to be the prodrug approach by which the pharmacokinetic patterns and ultimately therapeutic success can be obtained through introduction of promoities with the ideal physiochemical properties. It had been synthesized two prodrugs cis-AVTP [cis-6-(2-acetyl vinyl thiopurine] and trans-AVTP [trans-6-(2-acetyl vinyl thioguanine] 6 and assessed in the National Cancer Institute (NCI), then the results were compared with cytotoxicities of 6-MP and 6- thioguanine (6-TG).

The results show that that cis-AVTP and trans-AVTP exhibit both distinct and similar cytotoxicities toward different histotypes. Also it was found that the cytotoxic activity of both cis –AVTP and trans-AVTG correlated best with that of another thiopurine conjugate. The aim of this study is to synthesize and evaluate the cytotoxicity  of target compounds 6-[(5-pyridine-4-yl-1, 3, 4-oxadiazole-2-yl) dithio]-9H-purine (38) and 9H-purine-6-yl-benzyldithiocarbmate (45) against different cell line histotypes compared with the parent compound (6MP). 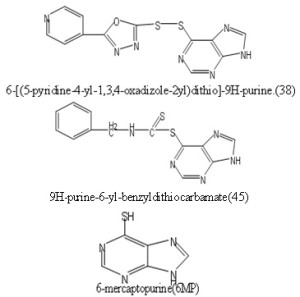 Chemistry: The synthetic procedures for the designed target compounds 38 and 45 are illustrated in schemes (2) and (3) respectively. The starting material for the generation of target compound 38 was Isoniazid which was refluxed with carbon disulfide in the presence of potassium hydroxide to give the mercapto- 1, 3, 4-oxadiazole derivative, compound 36, which was treated with N-bromosuccinamide to give compound 37, the reaction between 6-mercaptopurine and compound 37 in dimethyl formide (DMF) liberated the target compound 38.The liberation of dithiocarbamate derivatives compounds 45 was shown in scheme 3.

Amine containing compound, benzylamine was reacted with carbon disulfide in the presence of triethylamine to give compound 46. The isothiocynate derivative, 44 was obtained by the oxidation of compounds 43 using hydrogen peroxide. The final compound 45 was then obtained from the reaction between 6-mercaptopurine and compound.

The synthesized compounds have been identified by their melting points, IR spectra and CHN microanalysis. 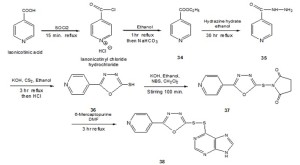 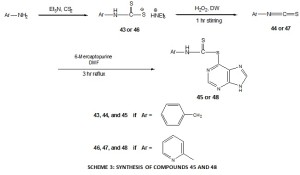 TABLE 1: THE PARAMETERS GI50, TGI AND LC50 OBTAINED FOR COMPOUND 45 IN THE NCI ANTICANCER SCREEN. PARAMETERS BELOW OR ABOVE THE HIGHEST OR LOWEST DRUG CONCENTRATION USED ARE LISTED AS 0.247 OR >100 RESPECTIVELY. ALL VALUES ARE GIVEN IN MICROMOLAR CONCENTRATION (µM)

TABLE 2: THE PARAMETERS GI50, TGI AND LC50 OBTAINED FOR COMPOUND 38  IN THE NCI ANTICANCER SCREEN. PARAMETERS BELOW OR ABOVE THE HIGHEST OR LOWEST DRUG CONCENTRATION USED ARE LISTED AS 0.297 OR >100 RESPECTIVELY. ALL VALUES ARE GIVEN IN MICROMOLAR CONCENTRATION (µM)

TABLE 3: THE PARAMETERS GI50, TGI, AND LC50 OBTAINED FOR 6MP IN THE NCI ANTICANCER SCREEN. PARAMETERS BELOW OR ABOVE THE HIGHEST OR LOWEST DRUG CONCENTRATION USED ARE LISTED AS <0.38 OR >100 RESPECTIVELY. ALL VALUES ARE GIVEN IN MICROMOLAR CONCENTRATION (µM). 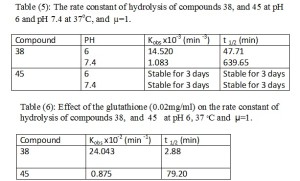 However, the median value obtained for all cell lines after MP32 treatment was lower than those of 6MP and nearly equal to those of MP31 (table 4). The present kinetic studies showed that prodrugs 45 and 38 liberated the drug 6MP at pH 6 faster than at pH 7.4 9 (table 5); this will make these compounds good candidates as prodrug for targeting cancer cells since the PH there approximates 6; while the prodrugs are more stable at pH 7.4, pH of normal cells. In addition the present study indicated that  compound 45 and 38 generate 6MP in presence of glutathione (table 6); this also make those prodrugs useful prodrugs for targeting 6MP to the tumor cells, since the levels of glutathione is relatively higher in cancer cells than in normal cells.

Several findings are worth consideration when the responses of the different histotypes toward compound 45 and 38 treatments are examined. Table 7 showed that after 38, 45 and 6MP treatment the median of TGI and LC50 are above the 100µM, so the comparison of the compounds mostly will be restricted on GI50 value. Leukemia cells had median GI50 value after 6MP treatment is less than that of both 38 and 45; the leukemia cell panel included 2 types of cell lines (CCRF-CEM and RPMI-8226).

TABLE 7: THE MEDIAN GI50, TGI, AND LC50 VALUES OBTAINED AFTER TREATMENT WITH 6MP, 45 AND 38 IN DIFFERENT HISTOTYPES VALUES ARE GIVEN IN MICROMOLAR CONCENTRATION (µM).

The response of renal cancer cell line panels toward treatment with 38 and 45 is of considerable significance. The cell line had the first and second lowest GI50 values toward 45 and 38 respectively (Table 7) ,suggesting that it is very sensitive to 38 and 45.The sensitivity of renal cancer cells is of importance because no chemotherapeutic agent is effective against renal cell carcinoma 7, 8.

It had been shown that incubation of isolated rat renal cortical cells with 6MP at 0.5 and 1mM concentrations for 2 h significantly increases cell death as measured by the release of lactate dehydrogenase compared with buffer- only incubations. This increase in lactate dehydrogenase could be partially blocked by allopurinol, an inhibitor of xanthine oxidase that catalyzes the oxidation of 6MP to thiouric acid and superoxide anion 9. These findings suggest that the toxicity of 6MP could be in part, due to the generation of reactive oxygen species and oxidative stress, and further indicate that isolated renal cells, 6MP toxicity occurs via multiple pathways. Thus 38 and 45 activity may also occur via multiple pathways. Ovarian cancer cells are more sensitive toward the 38 when the ovarian cell line had the first lowest GI50 value but the opposite for ovarian cell line after treatment with 45.The sensitivity of ovarian cancer cells toward 38 is of importance because , there is need for new chemotherapeutic drug effective against ovarian cancer 10.

Synthesis of Triethylammonium-N-benzyl dithio-carbamate (Compound 43): To stir mixture of benzylamine (10 g, 93 mmole) and triethylamine (9.43 g, 93 mmole) cooled in ice bath, carbon disulfide (7.1g, 93 mmole) was added from dropping funnel over a period of about 10 minutes with continuous stirring. The resultant precipitate was washed with ether (30 ml x 2) and recrystallized from ethanol-ether to give yellow crystals of compound 43. Percent yield (53%) melting point (110-112oC) reported (112oC) 12.

The reactions were initiated by adding 5 ml of stock solutions of the derivatives in methanol (0.1 mg/ml) to preheated buffer solution to give final concentration of derivatives of 0.01 mg/ml. The solutions were kept in a water-bath at 37oC and at appropriate time interval samples were withdrawn and the absorbances were recorded. The observed pseudo-first order rate constants were determined from the slopes of the linear plots of log (A¥-At) vs time, where A¥ and At are the absorbance reading at infinity and time t, respectively.

The NCI's Anticancer Drug screening: The NCI screening procedures were described in detail 14. Briefly, cell suspensions that were diluted according to the particular cell type and the expected target cell density (5000-40,000) cells per well based on cell growth characteristics) were added by pipette (100 µL) into 96-well microtiter plates. Inoculates were allowed a pre-incubation period of 24h at 37oC for stabilization. Dilutions at twice the intended test concentration were added at time zero in 100- µL aliquots to the microtiter plate wells. Usually, test compounds (45 and 38) were evaluated at five 10- fold dilutions .In routine testing, the highest well concentration is 10-4 M, but for the standard agents the highest well concentration used depended on the agent. Incubations lasted for 48 h in 5% Co2 atmosphere and 100% humidity. The cells were assayed by using the sulforhodamine B assay 7.

These three parameters were calculated if the level of cytotoxicity was reached, whereas if the effect was not reached or was exceeded, the value was listed as greater or less than the maximum or minimum concentration tested.

The thiopurine 6-Mercaptopurine (6MP) in NCI's standard agent database and, thus its in vitro cytotoxicity has been determined using the assay described above. The results from these assays can be accessed from NCI's website (http://itbwork.net. nci.nhi.gov).

Because the highest drug dilution used to assess the cytotoxicity of 6-MP was higher than 100µM, any GI50, TGI, and LD50 value obtained for 6MP and prodrugs (38 and 45) that was above 100µM is listed as greater than 100 to simplify the comparison between the 6MP  and  prodrugs.