INTRODUCTION: Prodrug: The term prodrug refers to a pharmacologically inactive compound which is converted to active form by metabolic biotransformation before eliciting its pharmacological action. Prodrugs are used to improve patient acceptability, improve absorption, alter bio-distribution, alter metabolism and alter elimination. The characteristics of prodrugs required for improved site-specific delivery are

Polymers: Polymers 3, 4 were used to design many polymeric prodrugs or polymer drug conjugates. Any polymer 5, 6 can be used for any class of drug. The ideal properties required for a polymer should be inert, nontoxic, functional groups required for covalent binding 7, 8, availability and biocompatibility, biodegradability, easily excreted. Polymers are classified as polymer based on backbone, i.e. polymer with carbon chain namely poly ethylene glycol, polypropylene, poly vinyl pyrrolidone and polymer with hetero chain namely cellulose, amylase. Another classification is natural polymers and synthetic polymers 9, 10. Natural polymers include cyclodextrins, dextran whereas synthetic polymers are further classified as biodegradable includes polylactic acid, poly amino acids and non-biodegradable include cellulose acetate propionate, hydroxyl propyl methyl cellulose. Types of polymer-drug linkages include mainly ester or amide. Nondegradable synthetic polymers 11, 12 used were mainly PEG (Poly Ethylene Glycol). Polymeric 13, 14 prodrugs was first proposed by H. Ringsdorf, it includes drug, polymeric backbone as carrier and spacer linked to a drug with polymeric backbone. Linkers or Spacers used are usually amino acids or peptides. Polyethylene glycol is available in different molecular weights, but for this study 1500 and 6000 molecular weights were chosen 15, 16. 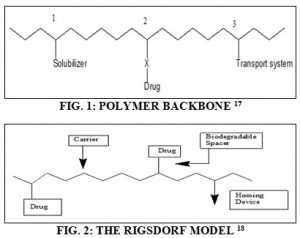 Drug: Paracetamol 19, 20, 21 is a well-known drug for its antipyretic, analgesic and anti-inflammatory activity. It belongs to a class of aniline analgesics. It is a weak inhibitor of prostaglandin synthesis, COX1, and COX2. The usual dose of Paracetamol for adults is 325-650 mg daily every 4-6 h 22, 23, 24. Adverse effects of Paracetamol include acute hepatic failure and dose more than 2000 mg cause upper GI complications. The drug being an OTC had been used more frequently than required. As a result of the overdosage, it results in Hepatotoxicity 25, 26, 27.

So, to overcome this, an approach of PEGylation was chosen. PEGylation is a process in which polymer Poly Ethylene Glycol (PEG) of different molecular weights were chosen, i.e. PEG 1500, and PEG 6000 was attached covalently to the drug by amide linkage 5, 6, 15, 16. 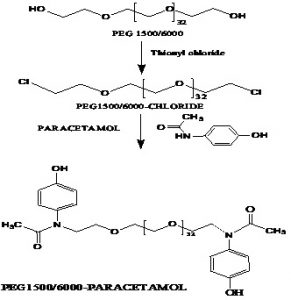 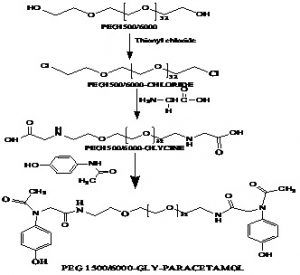 Preparation of Prodrugs of PEG 1500/6000-PCM: 1.5 g of polyethylene glycol 1.6 ml of pyridine were taken in a 250 ml two-necked round bottom flask fitted with stirrer & condenser. 4.5 ml of Thionyl chloride was added drop by drop for 30 min and the temperature was maintained at 40 ºC. After complete addition, the temperature was raised to 70 ºC & the reaction was carried out for 22 h. The residue was dissolved in dichloromethane & dried over anhydrous potassium carbonate & alumina & filtered. The filtrate was reprecipitated by cold diethyl ether. To this, a solution of DCC (Di Cyclo hexyl Carbodiimide) 1gm and 0.6 gm of DMAP (Di-Methyl Amino Pyridine) in 10 ml of DMF (Di-Methyl Formamide) was added. The flask was kept in an ice bath, and the temperature was maintained at 0 ºC, to this Paracetamol was added for 10 min. The flask was placed on a magnetic stirrer and allowed to continue stirring for seven days for the coupling reaction to occur at room temperature. The product obtained was dissolved in DCM (Dichloromethane) and reprecipitated by cold diethyl ether 5, 6, 15, 16.

Preparation of PEG 1500/6000-Glycine: PEG 1500/6000 1.5 gm and 1.6 ml of pyridine were taken in a two-necked round bottom flask, and 20 ml of DMF was added and placed on a magnetic stirrer. To this 0.18 gm of glycine was added in small portions for 3 h maintaining at room temperature. Then the contents were refluxed by attaching a condenser, maintaining a temperature of 130 ºC for 21 h. The residue was dissolved in DCM and re-precipitated by an excess of cold diethyl ether.

Preparation of PEG 1500/6000-Gly-PCM: A solution of DCC 1 gm in 10 ml of DMF and 0.6 gms of DMAP in 10 ml of DMF were taken in a beaker. The mixture was added drop by drop to another beaker containing a solution of 0.4 gm of PEG 1500/6000-Gly in 20 ml of DMF. Paracetamol 1 gm was added in portions to the above mixture at 0 ºC for 10 min. The contents were transferred to a round bottom flask with a condenser and placed on a magnetic stirrer. The coupling reaction was carried for 7 days at room temperature. The residue was dissolved in DCM and reprecipitated by an excess of cold diethyl ether 5, 6, 15, 16.

The standard drug was subjected for drug release at pH 1.2, 4.5 and 6.8 individually and 5 ml aliquots were withdrawn from the basket at time intervals of 5, 10, 15, 30, 45 and 60 min, and % cumulative drug release was noted using standard graph. A graph was plotted % cumulative drug release v/s time in min. The synthesized prodrugs were taken, and an amount equivalent to 10 mg of pure drug was weighed accurately and packed in an empty capsule shell. These capsules were placed in dissolution apparatus containing 900 ml of pH 1.2 buffer. The dissolution test was carried out at 37 ± 0.5 ºC, and aliquots of 5 ml samples were collected and time intervals (5, 10, 15, 30, 45 and 60 min) and replaced with equivalent fresh buffer to maintain sink conditions. The same procedure was followed for pH 4.5 and 6.8. A graph was plotted between % cumulative drug release v/s Time in min 5, 6, 15, 16.

Tail Immersion Method: For the analgesic activity by this method, the rats were divided into six groups consisting of 6 animals each. This method involves immersing end of the tail in warm water at 55 ºC. Within a few seconds the rat reacts by withdrawing the tail and the reaction time in seconds is noted. The reaction time before and after administration of the drug was noted for each, i.e. standard drug Paracetamol, PEG 1500-PCM, PEG 6000-PCM, PEG 1500-Gly-PCM and PEG 6000-Gly-PCM 5, 6, 15, 16, 28.

Statistical Analysis: The results are expressed as mean ± S.E.M. Difference in mean values between the groups were analyzed by One-way analysis of variance (ANOVA). The significance was assessed as p<0.05.

Statistical Analysis: The results are expressed as mean ± S.E.M. Difference in mean values between the groups were analyzed by One-way analysis of variance (ANOVA). The significance was assessed as p<0.05. 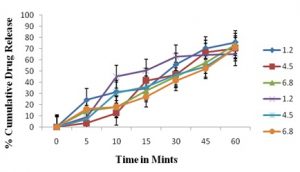 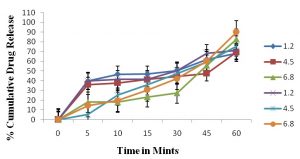 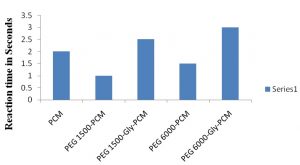 Discussion: PEG 1500-Gly-PCM and PEG 6000-Gly-PCM prodrugs have exerted more analgesic activity than PEG 1500-PCM, PEG 6000-PCM, and standard Paracetamol. This indicates that spacer (Glycine) has a role in the release of the drug.

Discussion: PEG 6000-PCM and PEG 6000-Gly-PCM prodrugs have exerted more analgesic activity than PEG 1500-PCM, PEG 1500-Gly-PCM, and standard Paracetamol. This indicates that spacer (Glycine) and also molecular weight of the polymer has a role in the release of the drug. 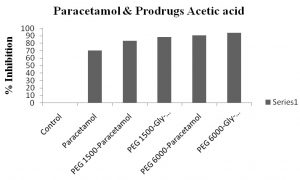 Discussion: PEG 6000-PCM and PEG 6000-Gly-PCM prodrugs have exerted more analgesic activity than PEG 1500-PCM, PEG 1500-Gly-PCM, and standard Paracetamol. This indicates that spacer (Glycine) and also molecular weight of the polymer has a role in the release of the drug.

CONCLUSION: It can be concluded that prodrugs of Paracetamol may be used for enhanced Analgesic activity and also reducing the intervals between the dosage of the drug.

ACKNOWLEDGEMENT: I thank Vaagdevi Pharmacy College for providing me the facility to publish my paper.

CONFLICT OF INTEREST: The Author does not have any conflicts of interest regarding publication of this paper.