ABSTRACT: Condensation of o-phenylene diamine with chloro acetic acid gave 2-chloromethyl benzimdazole, which undergoes halide replacement with phenylhydrazines to give the corresponding NN' disubstituted hydrazines. The synthesized compounds were subjected to microbiological screening and In- vitro anti-inflammatory activity.

Benzimidazole derivatives are an important class of nitrogen containing heterocycles and were reported to possess a wide spectrum of biological properties such as antibacterial, analgesic, anti-inflammatory, antifungal and antimalarial activities.  Although a number of drugs are available in the market, thirst for discovering new antimicrobial drugs with better pharmacokinetic profile, and lesser toxicity has become main objectives in the field of medicinal chemistry due to fast development of microbial resistance towards the existing molecules.

Despite a number of drugs being in clinical use, search for new NSAIDS is still relevant  because the existing molecules suffer from the drawback of adverse effects such as gastric ulceration, inhibition of platelet function, alterations in the renal function, hypersensitivity reactions etc.

The standards used are Norfloxacin and Gatifloxacin. The antibacterial data is given in the Data- 1.

The observation of other compounds revealed that the substitution of 6-nitro group in benzimidazole ring increases the antibacterial activity. All compounds have shown antibacterial activity against Gram positive bacteria as well as gram negative bacteria namely Staphylococcus aureus, Enterococci and Escherichia coli Shigella (Gram negative). The 6-nitro derivative of benzimidazole shows good activity against Aspergillus niger and Aspergillus flavus..

Melting points of the synthesized compounds were determined by open capillary method and were uncorrected. IR spectral analysis was carried out using FTIR-8400S, SHIMADZU at M.S.Ramaiah College of Pharmacy, Bangalore. 1HNMR spectral data was obtained from Indian Institute of Sciences, Bangalore.

The instrument used was amx-400 and the solvent used was deuterated chloroform. The mass spectral data were recorded from LCMS 2010A, SHIMADZU provided by UWIN Global Services, Bangalore. 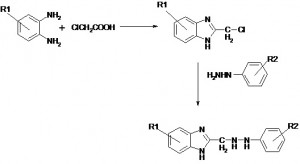 To a solution of Hydrazine hydrate (0.2mol, 10ml.), hydrochloric acid (10ml) was added dropwise in such a manner that the temperature of solution was maintained at 5-10º C, followed by ethylene glycol (40 ml) and then substituted aniline (0.087mol) was added. The mixture was refluxed for 2 hours, cooled to room temperature. The separated solid was filtered, dried and recrystallised from ethanol. The yields ranged from    50 – 65%.

The o-phenylene diamine (0.01mol) was dissolved in 4N HCl and chloroacetic acid (0.01mol) was added. The mixture was refluxed for 4 hours, cooled and on neutralization with sodium bicarbonate, the product was precipitated. It was filtered, washed with water, dried and recrystalized from ethyl acetate or aqueous ethanol. The yields ranged from 30 –60 %. The spectral data is given below-

To the ethanolic solution of 2-Chloromethylbenzimidazoles (0.02mol) phenylhydrazine (0.0217mol) were added and it was refluxed for 5 hr. hot mixture was poured in crushed ice with constant stirring. Separated solid was filtered, dried, and recrystallized from ethanol. The yields ranged from 45-65 %. The spectral data is given below-

The authors thank Mrs. R. Mythreyi, Assistant Professor, M. S. Ramaiah College of Pharmacy for her valuable suggestions during microbiological work. Their thanks are also due to M. S. Ramaiah Medical College for providing the cultures of micro-organisms, to Indian Institute of Sciences (IISc.), Bangalore, for the 1HNMR reports and to Quest, Bangalore, for the Mass spectral reports.