Categories Menu
Home » SYNTHESIS OF SOME 3, 5- DIPHENYL -∆1 –PYRAZOLINE AND 5-(2′′-FURYL)-∆1-PYRAZOLINE DERIVATIVES AND THEIR SCREENING FOR ANTIDEPRESSANT AND ANTICONVULSANT ACTIVITY

The compounds having a great variety of substituted hydrazine behave like as MAO inhibitors 21-23. Monoamine oxidase inhibitor (MAO) having hydrazide, hydrazine, and amino moieties such as isocarboxazide, phenelzine and meclobemide have shown profound antidepressant activity in human. The structures of the synthesized 2-pyrazoline derivatives are very similar to those of isocarboxazide 24. The studies by Parmal et al2 demonstrated monoamine oxidase inhibitory activity of some 1,3,5-triphenyl -2-pyrazolines,1-thiocarbamoyl-3,5-diphenyl-2-pyrazolines and bicyclic pyrazoline in behavioral despair test. Again Bilgin et al25 demonstrated the antidepressant and anticonvulsant activities of some 3-(2-furyl)-pyrazoline derivatives using despair and MES test respectively. Previously, Prasad et al 24investigated antidepressant activities of some 1, 3, 5-triphenyl-2-pyrazoline and 3-(2-hydroxynaphthalene-1-yl)-1,5-diphenyl-2-pyrazolines by using Despair test. Hence researchers have tried to investigate MAO and other amine oxidase inhibition activity of 2-pyrazoline and found promising results 26-29.

The discovery of such class of drugs has led to a considerable increase in modern drug development. It has also pointed out the biological activity arising from structural modification of prototype drug molecule.

In present work some new 3, 5-diphenyl-2-pyrazoline derivatives and 5-(2'-furyl)-2-pyrazoline derivatives have been synthesized¸ and then evaluated for their antidepressant and anticonvulsant activities. The antidepressant activity of the synthesized compound was done by using Porosolt Behavioural Despair (force swimming) test. Anticonvulsant activity of the synthesized compounds was performed by Maximal Electroshock (MES) and subcutaneous Pentylene tetrazole test. The neurotoxicity was determined by Rota rod toxicity test. 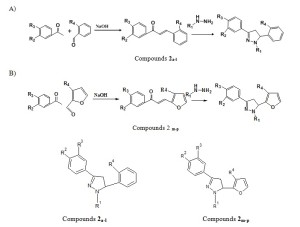 Pharmacology: Albino male rats/ mice of Wistar strain (150±10 g), 4–6-week-old, were obtained from Central Animal House of Hamdard University, New Delhi. They were housed in polypropylene cages in groups of 5 rats per cage and kept in a room maintained at 25±2°C with a 12-h light/dark cycle. They were allowed to acclimatize for one week before the experiments and were given free access to standard laboratory feed (Amrut Laboratory, rat and mice feed, Navmaharashtra Chakan Oil Mills Ltd, Pune, India) and water ad libitum.

Approval to perform the animal experiment was obtained from Institutional Animal Ethics Committee (IAEC) registered under the Committee for the Purpose of Control and Supervision of Experimental Animals (173/ CPCSEA).

5-6 minute later the immobility reaches plateau where the mice remain immobile for approximately 80% of the time. The mice was judge immobile if it floats in the water in an upright position and made only slight movement in order to prevent sinking. The duration of immobility was recorded during the 5 minute test. The antidepressant drug reduced duration of immobility.

The Albino mice were kept under condition at an ambient temperature of 25±2 ºC. Food and water were withdrawn prior to the test.The synthesized compounds were suspended in propylene glycol. Phenytoin was used as standard drug. The drugs and the standard compounds were administered intraperitoneally in a standard volume of 0.5ml/20g body weigh at a dose of 20 mg/kg. Supra maximal electro shock of 54 mA, 60 Hz was given to mice for 0.2 sec through corneal electrodes. The abolition of the hind limb tonic extensor spasm was recorded as an increased anticonvulsant activity.

The despair test was used to determine the efficacy of anti depressant activity. For predicting the activity of a large number of anti depressants such as MAO inhibitors and atypical antidepressant, the forced swimming test is generally used. It is a reliable test by which the antidepressant potency in human can be predicted more precisely 33­­.The data obtained on the anti depressant activity of the compounds and references are given in the table 2. In our study 3-phenyl-5-(2′′-chlorophenyl)-4,5-dihydro-1H-pyrazole-carbothioamide (2f), 1-(2,4-dinitro phenyl)-3-(3′-hydroxy- phenyl)-5-(2′′-methoxyphenyl)-4,5-di- hydro-1H-pyrazole(2k), 1-(2,4-dinitrophenyl)-3-(3′-hydroxyphenyl)-5-furyl-4,5-dihydro-1H-pyrazole (2m) significantly reduced the duration of immobility when compared to control (p<0.05, Table 2).

TABLE 1: PHYSICOCHEMICAL PARAMETERS OF THE COMPOUNDS

The anticonvulsant activity of the synthesized compounds was also performed and results    obtained from this experiment are shown the table 3.

TABLE 3: ANTIDEPRESSANT ACTIVITIES OF THE COMPOUNDS

TABLE 4: ANTICONVULSANT SCREENING OF THE COMPOUNDS

TABLE 5: NEUROTOXIC ACTIVITY OF THE COMPOUNDS

ACKNOWLEDGEMENT: The authors are thankful to the Head, Department of Pharmaceutical Chemistry, Jamia Hamdard, for providing necessary research facilities and in-charge of animal house for providing animals for conducting biological screening of the compounds and UGC, New Delhi for providing the GATE scholarship for conducting the Present research work.