SYNTHESIS OF SOME- 6- SUBSTITUTED- 6H- PYRROLO [3, 4-D] PYRIDAZINE DERIVATIVES AND THEIR EVALUATION FOR IN-VIVO ANTI-CONVULSANT ACTIVITY IN ALBINO RATS

SYNTHESIS OF SOME- 6- SUBSTITUTED- 6H- PYRROLO [3, 4-D] PYRIDAZINE DERIVATIVES AND THEIR EVALUATION FOR IN-VIVO ANTI-CONVULSANT ACTIVITY IN ALBINO RATS

INTRODUCTION: Pyrrole derivatives were reported as anti-inflammatory 1, antifungal 2, anticancer 3, while the Pyridazines are having the number of biological activities, such as anti-inflammatory, anticonvulsant, antimicrobial, antihypertensive, antibacterial, anti-helminetic, CNS stimulant,cardiotonic, antiallergics, antipsychotic, anti-parkinsonian, phosphodiesterase-III inhibitor and in the treatment of infection of hepatitis C virus 4. 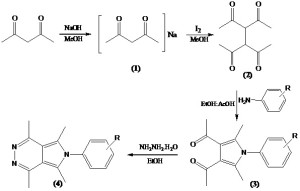 Step 1: Synthesis of sodium salt of Acetylacetone (1): A solution was prepared by dissolving sodium hydroxide (0.5 mole) in 25 ml of water. To this solution 100 ml of methanol was added slowly. This solution was slowly added with hand stirring to the acetylacetone (0.5 mole) contained in 250 ml flask. The creamy-white crystalline salt (1) was separated from solution immediately. The flask was stoppered and cooled in a refrigerator for 3 hours.  The sodium salt was filtered and washed with two small portion of cold methanol.

Step 2:  Synthesis of Tetraacetylethane (2): Sodium acetylacetonate (1) was ground to a fine powder in a mortar, 24.4 g. (0.2 mole) of the anhydrous material weighed into flask. After that 200 ml of diethyl ether was added, the suspension was stirred vigorously at room temperature with a magnetic stirrer. from a separatory funnel, a solution of 25.4 g. (0.1 mole) of iodine dissolved in 200 ml of diethyl ether was added, dropwise to the stirred mixture. The rate of addition was maintained roughly constant by occasional adjustments of the stopcock, and the total addition was completed in about 2.5 hours.

The reaction mixture was then poured into a large beaker, and the ether was allowed to evaporate overnight at room temperature. To the contents of the flask there is then added 500 ml of water and the mixture was allowed to stand for 2 hours. The remaining solid was collected by filtration, and washed several times with water, and finally dried in a vacuum desiccator. The product was recrystallized from methanol, which produced white colored crystals (2). The melting point was 184-189oC and yield 9-11g (36-45%).

Step 3: Preparation of N-substituted pyrrole (3): The aniline derivatives (0.04 mole) was added to the stirred slurry of tetraacetylethane (0.04 mole, 7.9g) and ethanol: acetic acid (3:4). The mixture was  refluxed for 12-15 hours. The mixture was cooled to room temperature. For the precipitation of pyrrole derivative (3), waterwas added to the above  mixture with stirring until the complete pyrrole derivative 3a-f were precipitated out. Products were recrystallized from water. The yield  of  compounds were 59,77, 68, 67, 71, 69 and Melting points were  128oC, 214, 162oC, 174oC, 168oC, 192oC  respectively.

Determination of Anti-Convulsant Activity: In the present study the Maximal electroshock (MES) method was used to evaluate the anticonvulsant activity of synthesized compounds (model no. - PP156, Company - INCO, ear electrode, 150 mA current for 0.2 sec). The experimental protocol was approved by the Institutional Animal Ethical Committee (IAEC)(Regd No. 1171/C/08/CPCSEA).

The synthesized compounds were evaluated for anticonvulsant activity  by assessing the reduction in the degree of electric shock- induced convulsions in the Wistar albino rat compared to standard phenytoin. Healthy Albino rats (Wistar strain) of either sex, weighing 100-160g were selected and provided standard rat feed and water ad libitum. Before the experiment, food was withdrawn overnight but adequate water was given to the rats. In this method, synthesized compounds were administered intraperitonially.After an hour of drug administeration the electric shock was given to induce convulsions.

The animals were divided equally into eight groups (Six  animal in each). The first group served as control (without anticonvulsant drug administrations) second group served as standard and received phenytoin (25mg/kg). The animals of third, fourth, fifth, sixth seventh and eighth  groups were given the synthesized compounds equalvelent to 50mg/kg  intraperitonially.  After an hour all the animals were given supra-maximal electric shock (60mA for 0.2 sec.) to induce convulsion.

The reduction in the severity in convulsions (abolition or reduction of hind limb extensor phase) were noted 6 and compared the activity of the synthesized compounds to the standard drug phenytoin sodium.

The percentage inhibition of convulsion were  determined by the following formula.

Where Vt and Vc are the inhibition of convulsion of  the drug treated and control groups respectively.

RESULT AND DISCUSSION: Some novel 6- substituted- 6H- pyrrolo [3, 4-d] pyridazine 4 (a-f )  were synthesized  and evaluated for their anti-convulsant  activity by Maximal electroshock (MES) method, all the synthesized compounds were effective as anti- convulsant  agents. Compounds 4a and 4ewere most effective producing 86.15 and   90.13% reduction in convulsions even more than standard.

ACKNOWLEDGEMENTS: We would like to express sincere gratitude to the Head, SLT Institute of Pharmaceutical Sciences, GGVV, Bilaspur (CG), For  providing me the platform to perform my research work in his Institute.