ABSTRACT: Peptide deformylase (PDF) is a mononuclear metal ion protein that is responsible for removing the N-formyl group of nascent proteins found in bacteria and chloroplasts in order for them to become mature proteins. From literature it was found that heterocyclic derivatives containing hydroxamic acid and hydroxyl amine exhibit good antibacterial and PDF inhibitory activity. Heterocycles bearing nitrogen, sulphur, oxygen and thiazole moieties constitute the core structure of a number of biologically interesting compounds. Recently 1,3,4 oxadiazole and 1,3,4 –triazole derivatives received significant attention owing to their diverse range of biological properties particularly being antifungal, antitubercular, antibacterial, antiviral, anticancer and antioxidant. Ethyl-cyano- acetate when treated with sodium hydrate and THF give acetate derivatives, which on further treatment with hydrazine hydrate and various reagent afforded heterocyclic hydroxylamine derivatives

INTRODUCTION: Current research mainly focuses on target specific therapy. In this context many target have been identified of which PDF is one such potential target. From literature it was found Peptide deformylase (PDF) is a prokaryotic metalloenzyme that is essential for bacterial growth but is not required by mammalian cells. Thus, it represents a selective and promising target for the development of new antibacterial agents.1 Using structural and mechanistic information together with high throughput screening, several types of potent PDF inhibitors have been identified. PDF inhibitors identified to date share a common structural feature of a "chelator + peptidomimetic" scaffold.2-5 Although compounds with many different chelators inhibit the cell free enzyme, only compounds containing hydroxamic acid or N-formyl hydroxylamine exhibit appreciable antibacterial activity. 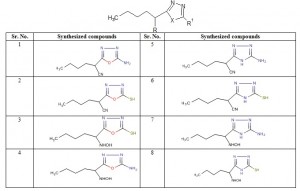 Step 1 for the alkylation of ethyl-2-cyano acetate: 2 gm (0.03 moles) of sodium hydride and 20 ml of THF was taken in the dry Round bottom flask, the suspension cooled to 00 C. To the above suspension slowly added ethyl-2-cyano acetate 20 ml (0.15 moles) in THF 20 ml, after 15 min. Butyl bromide 20 ml (0.05 moles) was added drop wise via syringe to the solution. The resulting mixture was allow to stirred at 00 C for 15 min. and then it was  reflux at 1000C for 51/2 Hrs. The whole reaction was monitored by using TLC, and it was observed under UV chamber or iodine chamber.  The mixture was then quenched with 30ml H2O and diluted with Et2O. The aqueous layer was removed and organic layer was wash twice with brine solution. Then combine the aqueous layers were then extracted 2-3 times with Et2O. The combine extract were pass through the MgSO4 and the solvent were removed by distillation method. Yield light brown color oily liquid was obtained.7

To the ethanolic (30ml) solution of the 2-cyano-ethyl hexanoate, (0.02 mole), hydrazine hydrate (0.04 mole) was taken in round bottom flask and heated at 600 C for 4 Hrs. Reaction was monitored by TLC. On cooling yellowish colored crystallized compound was filtered, dried.8

Synthesis of the amino-oxadiazole derivative:

To the methanolic solution of (0.01 mole) 2-cyanohexane hydrazide, (0.01 mole) cynogen bromide was added. The reaction mixture was stirred at room temperature for 3 Hrs. The resulting mixture was neutralized with sodium bicarbonate solution. The solvent evaporated and dried the product. Recrystallization was done using ethanol.

Synthesis of the thio-oxadiazole derivative:

The mixture of 2-cynohexane hydrazide (0.01 mole), (0.04mole) KOH, 5 ml CS2 and 10 ml ethanol was exposed in microwave at 6 watt for 10 min.After 10 min. the reaction mixture was cooled and acidifies with dil. HCL, precipitated product was filtered.

Formation of the amino- triazole derivative: A mixture of 0.01 mole 2-cyanohexane hydrazide and formamide (0.02mole) in ethylene glycol (50 ml) was reflux at 1800C for 12 Hrs. the reaction mixture was poured into ice cold water. Water under rotary evaporator and dried the product. Reaction was monitored by TLC Recrystallize from ethanol.

The remaining four product are synthesize by the conversion of cyanide to hydroxylamine of first four previous synthesized compounds by the following general method: Mixture of 0.01 mole of cyano drivatives, 0.02 mole of water and 0.01 mole of HCL was taken in round bottom flask and reflux for 1hour. Cool and dry the compound in oven below 100 . The resulting mixture in diethylether (30 mL) was taken at 0  , ethyl-chloroformate (1.3 g, 12mmol) and N-methylmorpholine (1.3 g, 13 mmol) were added and the mixture was stirred for 10 min. The solid was filtered of and the filtrate was added to freshly prepared hydroxylamine (0.5 g, 15 mmol) in methanol. The reaction mixture was stirred at room temperature for 15 min.

The synthesized compounds were subjected to antibacterial and antioxidant activity. Antibacterial activity of all the synthesized heterocyclic and hydroxyl amine derivatives were screened against both gram positive and gram negative bacteria by cup plate method (agar well diffusion technique). Streptomycin was used as standard drug.

Bacterias used for antibacterial screening of synthesized compounds were Bacillus subtilis, Staphylococcus aureus, Escherichia coli, Pseudomonas aeruginosa. Inoculums for all bacteria were obtained from national chemical laboratory. All bacteria were maintained by sub culturing and were used whenever required in nutrient agar medium.12-13

The suspension of all organisms were prepared by inoculating one colony of the strain in 20 ml of Nutrient broth in a conical flask and incubated at 37°C for 24 hours to activate the strain.

About 20-25 ml of Nutrient agar medium was poured aseptically into the each sterilized Petri plates. The poured material was allowed to set without disturbing it, until it got solidified. A definite volume of suspension containing test organism cultures (inoculums) was streaked on the respective Petri plates (cooled at 40ºC). Thereafter the wells (10 mm diameter) were made by boring into the agar surface with a sterile cork borer and scooping out the punched part of the agar. Into these prepared wells the test compounds solution, standard drugs solution and H2O (control) separately were added with the help of a micropipettes using sterile tip each time. After a period of pre-incubation diffusion, the plates were incubated at 37°C for 24 hours. The zones of inhibition were measured, as a parameter to assess antibacterial properties of the synthesized compounds14.

From literature survey it was found that PDF inhibitors have antibacterial, anticancer, antioxidant, anti-tuberculosis.

Experimental compounds were reconstituted in methanol to get different concentration (0-200 µg/ml) and used for assay.

The reaction mixture consisted of 1 ml of 0.1 mM DPPH in methanol and 0.5 ml of methanolic (80%) solution of experimental compounds at various concentrations ( 0-200 µg/ml). ascorbic acid used as positive control. The absorbance of the mixture at 517 nm was measured after 30 min of incubation period. The percentage of scavenging activity was determined by comparing the result of test materials with that standard antioxidant Ascorbic acid. The radical scavenging activity was expressed as the initiation percentage and monitored as per the equation:

The result was expressed as % inhibition by comparing value of the compounds with standard used i.e. Ascorbic acid.15

In the following table, mean zone of inhibition is expressed in mm at concentration level of 200µg/ml of test compounds and standard drug. 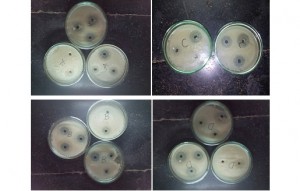 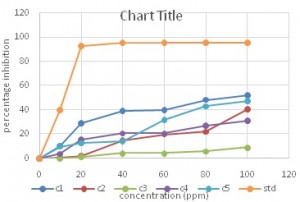 FIG. 5: % INHIBITION VS CONCENTRATIONS OF DRUGS AND STANDARD COMPOUND

With a view to develop effective antimicrobial agents, a series of oxadiazole and triazole derivatives with a various substituent’s were synthesized. The series was designed on the basis of many considerations from literature.

Thus, taking the above points in to consideration the present work aimed at, synthesizing compounds with general structure (Fig.7) having promising antibacterial activity. 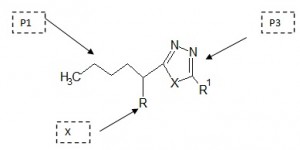 Heterocyclic derivatives is very important for PDF inhibitory activity and hence retained as a major functional group as per the literature, substituted aliphatic chain , with hydroxylamine, so that some conclusion drawn at the end of work.

Synthesis were carried out by procedures reported in literature and compounds were confirm by IR, NMR etc. details of which have been discussed in result and experimental part.

All the compounds were screened for antibacterial activity at the concentration of 200 µg/ml. water was used as a solvent and streptomycin were used as standard drugs.

From above studies it is clear that oxadiazole and Triazole ring containing hydroxyl amine and cyanide group can prove to be promising pharmacophore for antibacterial activity. These findings need to be confirming by further detail study.  The compound 1 i.e. 2-(5-thio-1, 3, 4-oxadizol-2-yl) hexanenitrile has highest potent antibacterial inhibitory activity than that of standard in all four microorganisms. Where the compounds 2, 3 and 5 i.e. 2-(5-amino-1,3,4-oxadizol-2-yl) hexanenitrile, 5-[1-(hydroxylamino) pentyl]-1,3,4-oxadiazole-2-thiol,2-(5-amino - 4H - 1, 2, 4- triazol-3-yl) hexanenitrile respectively possess moderate activity on Bacillus subtilis, Pseudomonas aeruginosa, Staphylococcus aureus.

The same work can be carried forward for specifically checking the mechanism by which the derivatives synthesized show antibacterial activity.