SYNTHESIS, PHYSICO-CHEMICAL INVESTIGATIONS AND BIOLOGICAL SCREENING OF METAL (II) COMPLEXES WITH HYDRAZONE SCHIFF BASE DERIVED FROM 5-FLUORO-3-HYDRAZONOINDOLIN-2-ONE AND ISOPHTHALALDEHYDE

SYNTHESIS, PHYSICO-CHEMICAL INVESTIGATIONS AND BIOLOGICAL SCREENING OF METAL (II) COMPLEXES WITH HYDRAZONE SCHIFF BASE DERIVED FROM 5-FLUORO-3-HYDRAZONOINDOLIN-2-ONE AND ISOPHTHALALDEHYDE

ABSTRACT: New tetradentate Schiff base and its Co(II), Ni(II), Cu(II), Zn(II), Cd(II) and Hg(II) complexes formed by the condensation of 5-fluoro-3-hydrazonoindolin-2-one with isophthalaldehyde. The coloured complexes were prepared of [MLX2], Where L = Schiff base hydrazone, M = Co(II), Ni(II), Cu(II), Zn(II), Cd(II) and Hg(II), X =  Cl-. Physico-chemical characterization has been carried out to determine the structure of the complexes. All the synthesized compounds, were studied for their in vitro antibacterial, and antifungal activities, against two Gram-negative (Shigella flexneri and Enterococcus aerogens) and one Gram-positive (Micrococcus luteus,) bacterial strains and against three fungal strains (Candida krusiae Candida parasilopsis and Malassesia pachydermatis) by using cup-plate method. The DNA cleavage capacity of all the complexes was analysed by agarose gel electrophoresis method.

INTRODUCTION: The development of bioinorganic chemistry field has increased the interest in Schiff base complexes, as they may serve as models for biologically important compounds and bioinorganic processes. Biological activity of complexes derived from hydrazones has been widely studied and found to have numerous biological activities: antibacterial, antitumor, antimalarial and antituberculosis effects. 1 Schiff bases are a significant group of organic compounds that have biological activities and diverse applications because of their antibacterial, antivirus activities, metal complexation and other pharmacological effects.

In recent years, Schiff bases and their complexes were established to have significant antitumor and biological activity. 2 Schiff base containing more than one hetero atoms beside π-electrons exhibit high inhibiting properties by providing electrons to interact with metal surface. 3 In this paper we report the preparation and structural characterization and biological screening of hydrazone Schiff base derived from 5-fluoro-3-hydrazonoindolin-2-one and isophthalaldehyde and its metal (II) complexes.

All the starting chemicals and solvents were of analytical grade and used without further purification. The hydrated metal salts were obtained from Loba.

Synthesis of Schiff base ligand:

0.002 mol, solution of 5-fluoro-3-hydrazonoindolin-2-one was added to 0.001 mol, solution of isophthalaldehyde in methanol, after addition reaction mixture is heated under reflux for about 6-7 hours at 70°C. After completion of reaction precipitate of ligand was formed. The product filtere after cooling and purified with methanol to afford Schiff base ligand as shown in Fig. 1. The purity of ligand was checked by M. P. and TLC.Synthesis of metal complexes:

Metal complexes of Schiff base were prepared by mixing 1 mmol of Schiff base with 1 mmol of Co(II), Ni(II), Cu(II), Zn(II), Cd(II) and Hg(II) salts keeping ligand-metal ratio 1:1. The resultant mixture was than refluxed for 2-3 hours. Then, to the reaction mixture sodium acetate was added to adjust the pH to 6.0–7.0. The complex obtained in each time was cooled, filtered and washed with the ethanol many times to purify and removed the excess of ligand. Finally complexes were places in desiccators for drying. 4

Elemental analysis carbon, hydrogen and nitrogen analysis was carried out using a Heracus Carlo Erba 1108 CHN analyzer at STIC, Cochin. The IR spectra of the Schiff base  and its Co(II), Ni(II), Cu(II), Zn(II), Cd(II) and Hg(II) complexes were recorded in the region of 4000-250 cm−1 on a Perkin Elmer - Spectrum RX-IFTIR spectrophotometer. The electronic spectra of the Co(II), Ni(II) and Cu(II) complexes were recorded on an ELICO SL-164 double beam UV-visible spectrophotometer in the range of 200-900 nm in DMF (10−3 M) solution. Magnetic susceptibility measurements were made at room temperature on a Gouy balance using Hg[Co(NCS)4] as the calibrant. 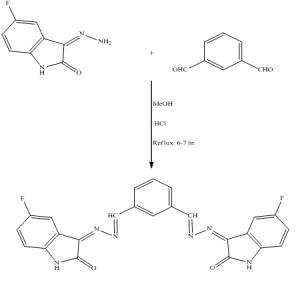 The synthesized compounds were evaluated for their antimicrobial activity against    Gram positive bacterial strain, Micrococcus luteus, Gram negative bacterial strains, Shigella flexneri and Enterococcus aerogens and three fungal strains, Candida krusiae, Candida parasilopsis and Malassesia pachydermatis by cup-plate method. 5 Standard antibacterial drug (Ampicillin) and antifungal drug (Nystatin) were used for comparison under similar conditions. DMSO was used as solvent to dissolve the compounds and also used as control. Activity was determined by measuring the diameter of the zone of inhibition in (mm). 200 ml of nutrient agar growth medium was dispensed into sterile conical flasks; these were then inoculated with 20 μl of cultures mixed gently and poured into sterile petridish. After setting a borer with 6 mm diameter was properly sterilized by flaming and used to make three uniform wells in each petridish.

The wells were loaded with 50 μl of different investigated compounds. The solvent DMSO, used for reconstituting the solvent for diluting the compounds, was similarly analyzed for control. The plates were incubated at 37oC for 24 hours. The above procedure was also adopted for fungal assays. The used medium was potato dextrose agar and incubated at 27oC for 48 hours. The zone of inhibition was measured with a scale in mm. 6

The gel electrophoresis experiments were performed by incubation at 37°C for 2 hours as follows: 250 mg of agarose and dissolve it in 25 ml of TAE buffer (pH=8.0). The samples were electrophoresed for 45 min at 50 V on agarose gel using tris-acetic acid-EDTA buffer. After electrophoresis, the gel was stained using with ethidiumbromide (EB) and photographed under UV light. 7

The analytical data for the ligand and the complexes together with some physical properties are summarized in Table 1. The analytical data of the complexes correspond to the general formula [MLX2], where L = Schiff base hydrazone, M =Co(II), Ni(II), Cu(II), Zn(II), Cd(II) and Hg(II), X =  Cl-. The formation of metal (II) complexes may proceed according to the equation given below:

TABLE: 1 PHYSICAL AND ANALYTICAL DATA OF THE HYDRAZONE SCHIFF BASE AND ITS METAL (II) COMPLEXES

Electronic spectra of Co(II), Ni(II) and Cu(II) complexes were recorded in DMF medium and spectral bands of the complexes are summarized in Table 2. The Co(II) complex exhibited three bands at 16077 and 21186 cm-1  corresponding to ν2 and ν3 transitions attributed to     4T1g(F) → 4T2g(F) (ν2) and 4T1g(F)→ 4T2g(P) (ν3). However, ν1 band is not observed because of its proximity to strong ν3 transition. Magnetic measurements for the Co(II) complex has µeff  value of 4.51 BM.

complexes were assigned to ν(N–H) and ν(C=N) of the ketimine moiety remain almost unaffected, indicating the non participation of these groups in coordination. 12 Therefore, the IR spectral data indicated that the coordination of hydrazone Schiff base to metal ion occurred through the N-atom of the azomethine (–C=N) group and the O-atom of carbonyl (C=O) group. Assignment of the proposed coordination sites was further supported by the appearance of medium bands at 453–499 cm–1 and 351–379 cm–1 due to M–N and M–Cl stretching frequencies, respectively. 13, 14

TABLE 3: IR SPECTRAL BANDS OF THE LIGAND AND ITS METAL COMPLEXES (CM-1)

The ESR spectrum of Cu(II) complex offer information of status in studying the metal ion environment. The ESR spectra of complexes have been recorded on X - band at frequency 9.1 GHZ under the magnetic field strength 3000 G in DMF at room temperature and their g||, g⊥, gav, and G values have been calculated. The g|| and g⊥ values were found to be 2.1549 and 2.0387, respectively. The gav and G value were calculated to be 2.0774 and 4.2340.18

In the present study, X-ray diffraction study was carried out using Rigaku Dmax X-ray diffractometer. The X-ray was produced using a sealed tube and the wavelength of X-ray was 0.154 nm (Cu K α radiation). The X-ray was detected using a fast counting detector based on silicon strip technology (Rigaku Lynx Eye detector). X-ray absorption fine structure studies was carried out using a conventional Siefert sealed X-ray tube with Tungsten target operating 20 kV and 40 mA. After this process, the scanning of the X-ray films was completed on Carl-Ziess microdensitometer coupled with computer to convert the data into IFEFFIT analysis. There are 11 reflections (2θ) between 4.664 to 68.435 with maxima at 2θ = 40.648 corresponding to the value of d=2.217.

Antimicrobial evaluation of ligand and its metal complexes:

TABLE 5: THE ANTIMICROBIAL ACTIVITY OF LIGAND AND ITS METAL (II) COMPLEXES EVALUATED BY (MM).

The degree to which the five complexes could function as DNA cleavage agents was examined using Calf-thymus DNA as the target. The efficiency of cleavage of these molecules was probed using agarose gel electrophoresis. 20 DNA cleavage activity of prepared compounds (Co(II), Ni(II), Cu(II), Cd(II), Zn(II) and Hg(II) (lanes SA1-SA6 respectively)) were analyzed by monitoring the conversion of supercoiled DNA (Form I) to nicked DNA (Form II) and linear DNA (Form III). SA4 has displayed partial cleavage of DNA and all the other samples have shown complete cleavage of DNA (Fig. 3). 21 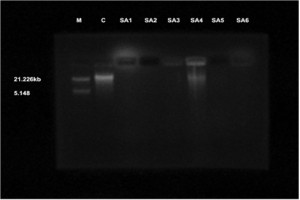 CONCLUSION: In this paper, the preparation, physico-chemical investigations and biological Screening of hydrazone Schiff base and its metal (II) complexes were reported. The complexes were formed in 1:1 (metal:ligand) ratio, as confirmed by the spectral analysis. The results of different analytical and spectroscopic analyses revealed that the complexes have octahedral geometry (Fig. 4). The hydrazone Schiff base acts as a tetradentate ligand and binds to metal ions through the carbonyl oxygen and the azomethine nitrogen. The Microbial activity of the ligand and its complexes have been studied on three bacterial , Micrococcus luteus, Shigella flexneri, Enterococcus aerogens  and  three fungal strains Candida krusiae, Candida parasilopsis and Malassesia pachydermatis by well  Fusion method and found that the metal complexes are more active on microorganisms than the hydrazone Schiff base ligand. The DNA cleavage activity of the metal (II) complexes showed good DNA cleavage efficiency. 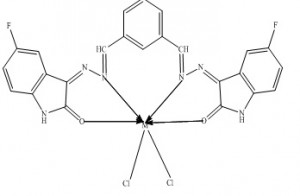 ACKNOWLEDGEMENT: The authors are thankful to the Chairman, Department of Chemistry, Gulbarga University, Gulbarga, for encouragement and facilities. One of the authors (NSM) is thankful to UGC New Delhi for the grant of research fellowship in science for Minority students Under MANF Scheme. We are also thankful to IIT Chennai, IIT Bombay and STIC Cochin for providing Spectral data.