A new series of 2, 5-disubstituted-1, 3, 4-oxadiazole derivatives were synthesized using appropriate methods & structures of the synthesized compounds were confirmed by IR,NMR & Mass spectral data.. These ligands were prefiltered for their drug likeness properties by Lipinski’s rule of 5 and it was found that all the ligands satisfied the rule of 5 for oral bioavailability.The prefiltered ligands were subjected for docking studies using integrated web server called docking server to investigate the interactions between the target compounds and the amino acid residues of the Glycogen synthase kinase-3β. The docking studies were done using auto dock between computationally designed 2,5-disubstituted 1, 3, 4-oxadiazole derivatives and Glycogen synthase kinase-3beta (GSK-3β) protein. The Calculated free energy of binding and estimated inhibition constants (Ki) were remarkable when compared with the standard GSK-3b inhibitors. It is calculated by the Lamarckian Genetic Algorithm (LGA). These values & the proposed interactions suggested that the 2, 5-disubstituted-1, 3, 4-oxadiazole derivatives are excellent inhibitors of GSK-3β.

INTRODUCTION: Recent developments indicate that the regeneration of beta cell function and mass in patients with diabetes is possible. A regenerative approach may represent an alternative treatment option relative to current diabetes therapies that fail to provide optimal glycemic control.

Diabetes results from an inadequate supply of the body with insulin. In type 1 diabetes, beta cells are destroyed by an autoimmune attack 1-3.

Despite remarkable improvements in the management of diabetic patients over the last decades, new therapies are still needed to further improve metabolic control and thereby reduce the development of diabetic complications that are associated with significant rates of morbidity and mortality 4.

One of the most promising concepts for the treatment of diabetes is the development of therapies for the preservation and regeneration of beta cell mass and function.

Beta cell mass in humans and rodents is dynamically regulated in response to changes in insulin requirements 13. A number of recent reports have demonstrated using rodent models of diabetes that pancreatic beta cell mass is responsive to pharmacologically active agents promoting beta cell expansion and/or protection. Several proteins exhibit beta cell regenerative activities in rodent models of diabetes, with long acting analogs of the incretin hormone GLP-1 being among the most promising candidates 14-18.

On the contrary, effective small molecule agents or chemically tractable candidate drug targets for systematic development of small molecule therapeutics are scarce. Studies with growth factors and genetic approaches have established the significance of certain intracellular pathways, including insulin signaling, Janus kinase/signal transducer and activator of transcription signaling, and G-protein-coupled receptor signaling for the regulation of beta cell mass 19.

In diabetes, beta cell loss and dysfunction are most likely resulting from synergistic effects of different factors negatively affecting beta cells for prolonged periods of time. For instance, chronic or recurrent exposure of beta cells to elevated levels of glucose and lipids (glucolipotoxicity) or to proinflammatory cytokines, such as interleukin-1β, tumor necrosis factor α, and interferon-γ, interferes with beta cell function and contributes to their destruction 20. Using potent and specific small molecule GSK-3b inhibitors resulted in the inactivation of GSK-3b protein, leads to protection to beta cells against death induced by high concentrations of glucose and the saturated fatty acid palmitate.

Materials & Reagents for synthesis: Unless otherwise noted, materials were obtained from commercial suppliers and used without further purification. Melting points of synthesized compounds were determined using open capillary tube and are uncorrected. All reactions were monitored by thin-layer chromatography (TLC) on 0.25 mm silica gel (60GF-254) plates and visualized with UV light.IR spectra were recorded on Thermo Nicolet spectrophotometer by using KBr pellets. The 1H-NMR was recorded on Bruker Avance II NMR 400 MHz instruments using DMSO as solvent and TMS as internal standard, chemical shifts are expressed as δ values (ppm). The final compounds were synthesized as per the Scheme 1.

General procedure for Synthesis of 2, 5-disubstituted-1, 3, 4-oxadiazole derivatives:(SS1-SS10) 21: A mixture of corresponding hydrazide (0.01mole) and appropriate aromatic carboxylic acid 0.01mole in 50 ml ethanol containing phosphoryl chloride as a catalyst was refluxed for 4-5 h  at 120oC. The mixture was cooled and poured into crushed ice and made neutralize by 20% NaOH. The resulting solid was, filtered, and the separated product was purified by recrystallization from ethanol. The physico-chemical & spectral data of 2, 5-disubstituted-1, 3, 4-oxadiazoles (SS1-SS10) is depicted in Table 1. 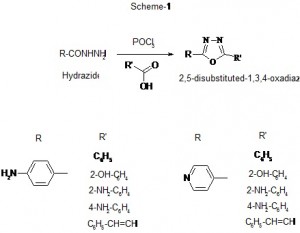 The synthesized 2, 5-disubstituted-1, 3, 4-oxadiazole derivatives were prefiltered for their drug-likeness properties using online version of molinspiration software which is based on the Lipinski’s rule of 5 for checking the oral bioavailability of the drugs 22 & is shown in the Table 2. 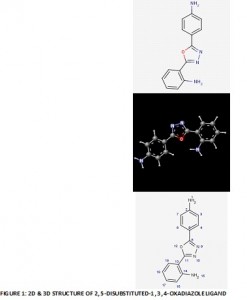 Computational Methods: Docking simulations were performed using the Lamarckian genetic algorithm (LGA) and the Solis & Wets local search method 26. Initial position, orientation, and torsions of the ligand molecules were set randomly. Each docking experiment was derived from 10 different runs that were set to terminate after a maximum of 250000 energy evaluations. The population size was set to 150. During the search, a translational step of 0.2 Å, and quaternion and torsion steps of 5 were applied. 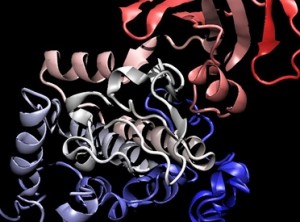 FIGURE 3: VISUALIZATION OF THE LOWEST ENERGY CONFORMATION OF COMPOUNDS (SS3, SS4 & SS9) to 3F7Z COMPLEX IS SHOWN IN ASTEXVIEWER™ (AN IN BUILT APPLICATION OF MOLECULAR DOCKING SERVER) 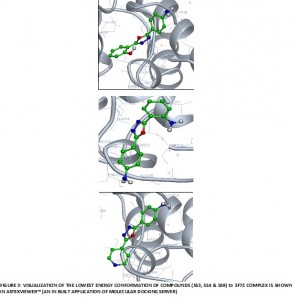 FIGURE 4: HB PLOT OF THE COMPOUND SS4 SHOWING INTERACTION WITH DIFFERENT AMINOACIDS OF THE PROTEIN 27, 28 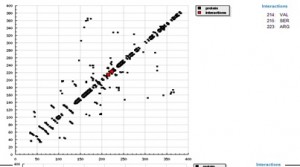 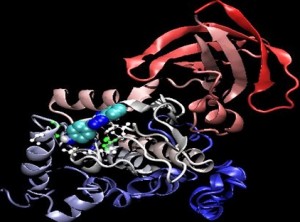 RESULTS & DISCUSSION: The synthetic route used to synthesize title compounds is outlined in Scheme 1. Various 2, 5-disubstituted-1,3,4-oxadiazoles (SS1-SS10) were prepared by treatment of corresponding hydrazides with various substituted aromatic carboxylic acid in the presence of phosphorous oxychloride. The structures of various synthesized compounds were assigned on the basis of their spectral studies. The physic-chemical data, FTIR, 1H-NMR and Mass spectral data for all the synthesized compounds are reported in Table 1 & 2.The title compounds 2, 5-disubstituted-1, 3, 4-oxadiazoles (SS1-SS10) were obtained the reaction of corresponding hydrazides  with different aromatic carboxylic acids in the presence of POCl3. IR spectra of compounds showed characteristic peak of C=N at 1640.35 cm-1 , C-H (aromatic) at 3045.81 cm-1 , C=N at 1615.78 cm-1 ,O-H at 3440.15 cm-1 C-O-C at 1060.25 cm-1 . This is further supported by 1H-NMR spectral data with δ value at 4.10(2H,d,NH2), 6.30-7.78(8H,m.aromatic protons).

In the present study, we constructed a protein-ligands complex model with an X-ray crystal structure (PDB code 3F7Z; Figure 2) and the ligands were observed in crystal complex structures using MMFF94 simulation and by Gasteiger partial charges to gain better enrichment in virtual screening. Docking simulations were performed using the Lamarckian genetic algorithm (LGA) and the Solis & Wets local search method (Solis and Wets, 1981). Initial position, orientation, and torsions of the ligand molecules were set randomly. Each docking experiment was derived from 10 different runs that were set to terminate after a maximum of 250000 energy evaluations. The population size was set to 150. During the search, a translational step of 0.2 Å, and quaternion and torsion steps of 5 were applied. Interestingly, docking results reveal that all the compounds inside GSK3-β protein is outlined by different aminoacids and the hydrophobic pocket is comprised of VAL 214 & ILE 228.Small molecules are bound to human serum albumin by four binding modes; Hydrogen bonds, Van der vaals, electrostatic & hydrophobic interactions.

The result gives the total energy of four binding modes & is shown in Table 3. Calculated free energy of binding for compounds SS3, SS4 & SS9 in the inhibitor binding site (IBS) were -4.46, -5.06 and -4.49 kcal/mol respectively in the best pose (Figure 3). A comparison of different energies, interacting surfaces and frequencies of species etc. between compounds as well as GSK3-beta inhibitor II & CHIR99021 (known inhibitors) is listed in (Table 3).

The HB plot of the SS4-3F7Z complex shows the interaction of protein with the different aminoacid residues & is shown in Figure 4. The Figure 5 Shows image of SS4 docked with 3f7z pdb code & software includes code developed by the Theoretical and Computational Biophysics Group in the Beckman Institute for Advanced Science and Technology at the University of Illinois at Urbana-Champaign. Ligand SS4 which has an amino group (-NH2) at C14 & an amino group (-NH2) at C2 is docked into IBS of 3F7Z outlined by SER 215, ARG 223, VAL 214.

In the present study, we have made detailed analysis of compounds SS1-SS10 in the context of its inhibition of GSK-3beta activity. All the compounds screened in the present study have 1, 3, 4-oxadiazole ring having substitution at 2nd & 5th position. Compounds having such moiety most likely offer a wide range of bioactivities such as anti-inflammatory, antimycobacterial, anti-convulsant etc., activities. Recently, these compounds are found to possess anti-diabetic & anti-alzheimer activities. Hence 1,3,4-oxadiazole  ring with  substitutions at 2nd &  5th position seems to be important for imparting GSK-3beta inhibitory activity.

CONCLUSION: All the ligands have shown inhibition to GSK-3β, especially SS4 which contains activating substituents (-NH2) on both ortho & para position of the aromatic ring attached to the 2nd & 4th position of 1, 3, 4-oxadiazole when compared with the standard GSK-3beta inhibitors. It is observed that   the compounds have hydrogen & also other interactions which are important for the folding of proteins. This is important in keeping a protein alive and biologically active, because it allow to the protein to decrease in surface are and reduce the undesirable interactions with water. Therefore, it is evident that these 2, 5-disubstituted-1, 3, 4-oxadiazoles are good GSK-3beta inhibitors. These agents can be utilized to treat Type-I Diabetes mellitus & will play vital role as anti-diabetic agents.