There has been considerable interest in the development of novel compounds with anticonvulsant, antidepressant, analgesic, anti-inflammatory, anti platelet, anti malarial, antimicrobial, antimycobacterial, antitumoral, vasodilator, antiviral and antis chistosomiasis activities. Hydrazones possessing an azometine -NHN=CH- proton constitute an important class of compounds for new drug development. Therefore, many researchers have synthesized these compounds as target structures and evaluated their biological activities. These observations have been guiding for the development of new hydrazones that possess varied biological activities.

INTRODUCTION: Hydrazones have been demonstrated to possess, among other, antimicrobial, anticonvulsant, analgesic, anti-inflammatory, antiplatelet, antitubercular and antitumoral activities. For example, isonicotinoyl hydrazones are antitubercular; 4-hydroxybenzoic acid [(5- nitro- 2- furyl) methylene]-hydrazide (nifuroxazide) is an intestinal antiseptic; 4-fluorobenzoic acid [(5- nitro- 2- furyl) methylene]-hydrazide 1 and 2, 3, 4-pentanetrione-3-[4-[[(5-nitro-2-furyl) methylene] hydrazino] carbonyl] phenyl]-hydrazone 2, which were synthesized in our Department, have antibacterial activity against both Staphylococcus aureus ATCC 29213 and Mycobacterium tuberculosis H37Rv at a concentration of 3.13µg/mL. N1-(4- Methoxybenzamido) benzoyl]-N2- [(5- nitro- 2- furyl) methylene] hydrazine, which was also synthesized in our Department 3, demonstrated antibacterial activity. In addition, some of the new hydrazide-hydrazones that we have recently synthesized were active against the same strain of M. tuberculosis H37Rv between the concentrations of 0.78-6.25 µg/mL 4.

History: Isonicotinic acid hydrazide (isoniazid, INH) has very high in vivo inhibitory activity towards M. tuberculosis H37Rv. Sah and Peoples synthesized INH hydrazide-hydrazones 1 by reacting INH with various aldehydes and ketones. These compounds were reported to have inhibitory activity in mice infected with various strains of M. tuberculosis 5. They also showed less toxicity in these mice than INH 5, 6 Buu-Hoi et al. synthesized some hydrazide-hydrazones that were reported to have lower toxicity than hydrazides because of the blockage of –NH2 group. These findings further support the growing importance of the synthesis of hydrazide-hydrazones compound 7.

Many effective compounds, such as iproniazide and isocarboxazide, are synthesized by reduction of hydrazide-hydrazones. Iproniazide, like INH, is used in the treatment of tuberculosis. It has also displays an antidepressant effect and patients appear to have a better mood during the treatment. Another clinically effective hydrazide-hydrazones is nifuroxazide, which is used as an intestinal antiseptic.

Experimental: All the melting points reported in this dissertation progress report were determined by open capillary tube method and are uncorrected. The synthetic and analytical studies of the compounds were carried out using laboratory grade and analytical grade regents as the case may be standard procedure or reported methods were followed with or with out modification appropriately as and when required.

Synthesis of N'-(4-chlorobenzylidene)-2-phenylaceto hydrazide (GL1): A mixture of p-chlorobenzaldehyde (1.39gm, 0.01mole)  and 2-phenyl acetohydrazide (1.5gm, 0.01mole) were dissolved in methanol then two drops of conc. HCl were added as catalyst and stirred at room temperature for 4hr. the reaction mixture was poured into ice and filtered. The crude product so obtained was dried and recrystallized with methanol. Solvent system: Chloroform: Methanol (8:2)

Synthesis of N'-(2-chlorobenzylidene)-2-phenylaceto hydrazide (GL2): A mixture of 2-chlorobenzaldehyde (1.39gm, 0.01mole)  and 2-phenyl acetohydrazide (1.5gm, 0.01mole) were dissolved in methanol then two drops of conc. HCl were added as catalyst and stirred at room temperature for 3hr. the reaction mixture was poured into ice and filtered. The crude product so obtained was dried and recrystallized with methanol. Solvent system: Chloroform: Methanol (8:2)

Synthesis of N'-(3, 4, 5-trimethoxybenzylidene)-2-phenylacetohydrazide (GL3): A mixture of   benzaldehyde (1.06gm, 0.01mole) and 2-phenyl acetohydrazide (1.5gm, 0.01mole) were dissolved in methanol then two drops of conc. HCl was added as catalyst and stirred at room temperature for 4hr. the reaction mixture was poured into ice and filtered. The crude product so obtained was dried and recrystallized with methanol. Solvent system: Chloroform: Methanol (8:2) 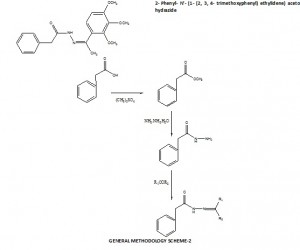 Anticonvulsant Activity: Epilepsy is a common neurological disorder and a collective term given to a group of syndromes that involve spontaneous, intermittent, abnormal electrical activity in the brain. The pharmacotherapy of epilepsy has been achieved during the last decade. Furthermore, although for the last twenty years new antiepileptic drugs have been introduced into clinical practice, the maximal electroshock (MES) test and the subcutaneous pentylenetetrazole (scPTZ) test are the most widely used animal models of epilepsy to characterize the anticonvulsant activity. The biological results revealed that in general, the acetylhydrazones 2 provided good protection against convulsions while the oxamoylhydrazones 3 were significantly less active 21.

Non-steroidal anti-inflammatory drugs (NSAIDs) have a wide clinical use for the treatment of inflammatory and painful conditions including rheumatoid arthritis, soft tissue and oral cavity lesions, respiratory tract infections and fever. The two isoforms of cyclooxygenase (COX) are poorly distinguishable by most of the classical NSAIDs and these agents actually inhibit COX-1 extensively, besides COX-2, leading to gastrointestinal injury, suppression of TXA2 formation and platelet aggregation. The combination of these interactions is probably the reason for gastrointestinal bleeding as the most serious complication of these drugs. Some evidences suggest that the hydrazone moiety present in some compounds possess a pharmacophoric character for the inhibition of COX.

The most important anti-inflammatory derivative 2-(2-formylfuryl) pyridylhydrazone 7 presented a 79 % inhibition of pleurisy at a dose of 80.1 ìmol/kg. The authors also described the results concerning the mechanism of the action of these series of N-heterocyclic derivatives in platelet aggregation that suggests a Ca2+ scavenger mechanism. Compound 7 was able to complex Ca2+ in in vitro experiments at 100 ìM concentrations, indicating that these series of compounds can act as Ca2+ scavenger depending on the nature of the aryl moiety present at the imine subunit 22.

Antimycobacterial Activity: Tuberculosis is a serious health problem that causes the death of some three million people every year worldwide 23. In addition to this, the increase in M. tuberculosis strains resistant to front-line antimycobacterial drugs such as rifampin and INH has further complicated the problem, which clearly indicates the need for more effective drugs for the efficient management of tuberculosis. Meyer and Mally prepared new hydrazones by reacting isoniazid (INH) with benzaldehyde, o-chlorobenzaldehyde and vanilin 5. Shchukina et al. prepared INH hydrazide-hydrazones 1 by reacting INH with various aldehydes and ketones; the compounds were reported to have activity in mice which had been infected with various strains of M. tuberculosis, and also indicated lower toxicity than INH 5, 6.

Antitumoral Activity: A variety of antitumoral drugs are currently in clinical use. The search for antitumoral drugs led to the discovery of several hydrazones having antitumoral activity. Some of diphenolic hydrazones showed maximum uterotrophic inhibition of 70%, whereas compound 58 exhibited cytotoxicity in the range of 50-70% against MCF-7 and ZR-75-1 human malignant breast cell lines 25.

Antimicrobial Activity: The dramatically rising prevalence of multi-drug resistant microbial infections in the past few decades has become a serious health care problem. The search for new antimicrobial agents will consequently always remain as an important and challenging task for medicinal chemists. Ethyl 2-arylhydrazono-3-oxobutyrates 17 were synthesized in order to determine their antimicrobial properties. Compound 17d showed significant activity against S. aureus whereas the others had no remarkable activity on this strain. Compound 17e was found to be more active than the others against Mycobacterium fortuitum at a MIC value of 32 ìg/ml 26.s

RESULT & DISCUSSION: The synthesized compounds were purified and the purity of all compounds was checked by melting point determination. The structures of these compounds were established by recording spectral data (Table 1, 2 & 3). In the present work synthesized hydrazone derivative compound significantly expected to show Anticonvulsant activity, analgesic, anti-inflammatory, antiplatelet activity antimycobacterial activity and antimicrobial activity.