B. Moksharagni and K. Hussain Reddy*

Synthesis of 2-formylpyridine nicotinoyl hydrazone (FPNH): A 5 mmol of 2-formylpyridine (0.56 mL) dissolved in 20 mL of methanol was added to a methanolic solution of nicotinic acid hydrazide (0.685g, 5 mmol). The contents were taken in a round bottom flask stirred for 20 min. A yellow colored product was formed. It was collected by filtration, washed with a few drops of ethanol and dried in vacuum. Yield of the product was 85%, mp: 162-164 °C.

General procedure for the synthesis of lanthanide complexes: To the ligand (0.480g, 2 mmol) dissolved in 20mL of methanol, lanthanum (III) nitrate hexahydrate [Ln(NO3)3.6H2O] (1mmol) dissolved in 10mL of methanol was added. The reaction mixture (taken in 100mL round bottom flask) was heated under reflux on water bath for 2 - 4 hr. Upon cooling solid substance was formed. It was collected by filtration, washed with 10mL of hexane and dried in vacuum. Physicochemical and analytical data of lanthanide complexes are included in Table 1.

Physical measurements: The elemental analyses were performed using a Perkin-Elmer 2400 CHNS elemental analyzer. The molar conductance of the complexes in DMF (10-3 M) solution was measured at 28 °C with a Systronic model 303 direct-reading conductivity bridge. The electronic spectra were recorded in DMF with a Perkin Elmer UV Lamda - 50 spectrophotometer. FT-IR spectra in KBr disc were recorded in the range 4000 - 400 cm-1 with a Perkin Elmer spectrum 100 spectrometer. The cyclic voltammetry was performed with a CH instruments 660C electrochemical analyzer and a conventional three electrodes, Ag/AgCl reference electrode, glassy carbon working electrode and platinum counter electrode. Nitrogen gas was purged and measurements were made on the degassed (N2 bubbling for 5 min) complex solution in DMF (10-3 M) containing 0.1M tetrabutyl ammonium hexaflourophosphate (TBAHP) as the supporting electrolyte.

DNA binding experiments: Interaction of complexes with calf thymus DNA was studied by electronic absorption spectroscopy. The interaction of the complexes with DNA was carried out in tris-buffer. Solution of calf thymus - DNA (CT-DNA) in (0.5 mM NaCl/5 mM Tris-HCl; pH = 7.0) buffer gave absorbance ratio at 260 nm and 280 nm of 1.89 indicating that the DNA was sufficiently free of proteins. The DNA concentration per nucleotide was determined by absorption coefficient (6600 dm3 mol-1 cm-1) at 260 nm. Stock solutions stored at 4 ºC were used after no more than four days. The electronic spectra of metal complexes in aqueous solutions were monitored in the absence and presence of CT-DNA.

RESULTS AND DISCUSSION: The ligand, FPNH was used for the preparation of lanthanide metal complexes. The ligand was characterized based on IR, NMR and Mass Spectral data.

GC-MS: The spectrum (Fig. 1) shows peak at (m/z) 240 corresponding to molecular ion peak of the ligand. 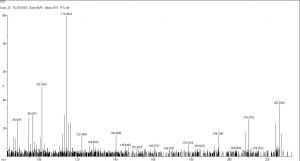 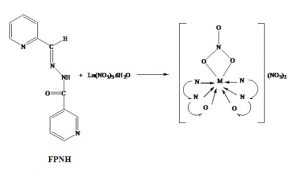 The analytical data (Table 1) are consistent with the proposed molecular formulae [Ln(FPNH)2 (NO3](NO3)2 (where, Ln = La, Ce, Pr, Nd, Sm; FPNH = 2-formylpyridine nicotinoyl hydrazone), of complexes. The molar conductivity values (87-132 Ω -1 cm2 mol-1) for the complexes suggest that these are 1:2 electrolytes 7. The presence of nitrate in the complexes was confirmed by brown ring test 8.

TABLE 1: ANALYTICAL AND PHYSICO-CHEMICAL PROPERTIES OF APINH LIGAND AND ITS LANTHANIDE(III) COMPLEXES 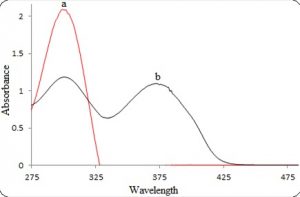 The weak f-f transitions occurring in the region due to lanthanide ion in the complexes are obscured by the intense ligand bands. Also the ligand band remains largely unaffected on complexation and insensitive to the lanthanide ion. No absorption band due to f-f transition of lanthanide (III) ions could be located in the visible region in the spectra of complexes. This is probably due to the fact that the f-f bands are weak and obscured by the intense (M L) charge transfer band 9.

* Spectra of the complexes were recorded in DMF solvent.

Infrared spectra: IR spectrum of FPNH is compared with its lanthanide complexes to determine donor atoms of ligand. IR spectral data are given Table 3. The IR spectrum of the ligand has several prominent peaks due to νN-H, νC=O and νC=N stretching modes, respectively. In the spectra of complexes, νN-H and νC=O bands are present suggesting that the hydrazone acts as neutral ligand. The νC=N in the spectrum of free hydrazone is shifted to lower frequency in the spectra of complexes suggesting the involvement of azomethine nitrogen in chelation. IR data suggest that the hydrazone ligands act as neutral tridentate ligand.

The IR spectrum of the complexes demonstrates the presence of coordinated nitrate. The two strong bands are observed in complexes due to the presence of coordinated nitrates. The two strong bands associated with asymmetric and symmetric stretch of coordinated to NO3- (C2v) group appear in the range 1417- 1468 (ν1) and 1086 - 1089 (ν4) cm-1. The frequency separation ∆ν (ν1- ν4) increases as the coordination of nitrate group increases from monodentate to bidentate and/or bridging. The magnitude of ∆ν is used to establish the type of nitrate coordination. In the present complexes the ∆ν is about 180 cm-1 and is typical of bidentate bonding of nitrate. The other vibrational band is observed around 1380 cm-1 in IR spectra of complexes indicating the presence of ionic nitrate 10. (D3h symmetry, free NO3- ion). The data indicate that the complexes contain free ionic nitrate and coordinated bidentate nitrate groups. The new bands in 416 - 418 and 522 - 524 cm-1 region are assigned to ν (Ln–O) and ν (Ln-N) vibration respectively.

Based on molar conductivity, magnetic moments, electronic spectral data, a tentative and general structure for the complexes is given in Fig. 3. 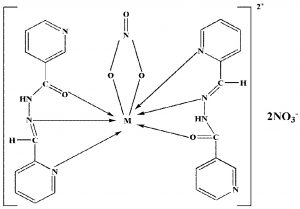 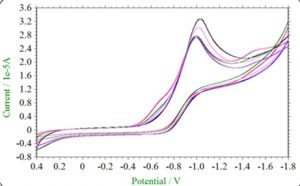 The electrochemical data of complexes are presented in Table 5. Repeated scans at various scan rates suggest the presence of stable redox species in solution. E1/2 values are incorporated in Table 4.

TABLE 5:  ELECTRONIC ABSORPTION DATA UPON ADDITION OF CT-DNA TO THE COMPLEX

It may be inferred that Ln(III) complexes undergo reduction to their respective Ln(II) complexes 11. The complexes have large separation (134- 274 mV) between anodic and cathodic peaks indicating quasi-reversible character. The log Kc and ∆G ̊ values suggest that the complexes are stable in solution state. 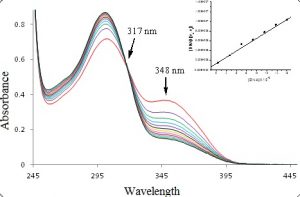 The intrinsic binding constants (Kb), were determined by using the equation:

A plot of [DNA]/(εa-εf) versus [DNA] gave a slope of 1/ (εb-εf), and vertical intercept equal to 1/ Kb (εb–εf); Kb was calculated from these values. The binding constants (Table 5) suggest that the complexes bind DNA strongly. On addition of DNA, the absorbance of the complexes decreases (hyperchromism) and absorption maximum of all complexes is shifted to higher wavelength (bathochromism). A sharp isobestic point (317 nm) for the absorption titration curves (Fig. 5) suggests that there is only one mode of binding 12. Small bathochromic shift (Δλ = 2 nm) low binding constants (Kb) values and bulky nature of complexes suggest groove binding of complexes to DNA.

CONCLUSION: Lanthanide complexes of 2- formylpyridine nicotinic acid hydrazone have been synthesized and characterized based on physicochemical spectral data. A general structure is proposed for the complexes. DNA binding properties of lanthanide complexes are investigated using absorption spectroscopy.

B. Moksharagni and K. H. Reddy*