ABSTRACT: In recent years, synthesis and biological evaluation of novel 4H-1, 4-benzothiazines and their sulfone analogues have gained momentum due to their medicinal and industrial importance. The present article describes the synthesis of new 4H-1, 4-benzothiazines via condensation and oxidative cyclization of substituted 2-aminobenzenethiols with compounds containing active methylene groups. It is believed that the reaction proceeds via intermediary of the enaminoketone system. The sulfone derivatives were synthesized by oxidation of 4H-1, 4-benzothiazines using 30% hydrogen peroxide in glacial acetic acid. The structures of the compounds have been confirmed by spectral and chemical analysis.The synthesized compounds were screened for antioxidant activity by 1,1-diphenyl-2-picrylhydrazyl (DPPH) radical scavenging assay and 2,2-azinobis(3-ethylbenzothiazoline-6-sulfonic acid) (ABTS●+) radical cation decolorization assay. The in vitro antibacterial activity was tested against S. aureus, B. subtilis (Gram positive) and E. coli, Pseudomonas aeruginosa (Gram negative) microorganisms using paper disc  diffusion method using nutrient agar medium and the antifungal activity of synthesized compounds was tested on fungal strains: A. niger, C. albicans using disc diffusion method.

Moreover, 1, 4-benzothiazine was assigned as an anti-corrosion application to mild steel industries.

General procedure for the synthesis of substituted 4H-1, 4-benzothiazines 5a-d

β-Diketone/β-ketoester 3a-c (0.01 mol) was treated with a solution of 2-aminobenzenethiol 1a-b (0.01 mol) in 5 mL of DMSO and the resulting mixture was heated under Reflux (190°C) for 20 min., then cooled and concentrated on a rotary evaporator. The residue was washed with petroleum ether and crystallized from methanol.

A solution of 4H-1, 4-benzothiazine 5a-d (0.01 mol) in 20 mL glacial acetic acid was added to 30% hydrogen peroxide (5 mL) and then the mixture was heated under reflux for 15 min. keeping the temperature between 50°C and 55°C. Another lot of 30% hydrogen peroxide (5 mL) was added after 15 min. without heating. Then the mixture was heated under reflux (120°C) for an additional 4-5 h, concentrated under reduced pressure and the residue was treated with crushed ice. The resultant solid product 6a-d was filtered and crystallized from ethanol.

The synthesized compounds were screened for antioxidant activity by 1, 1 – diphenyl – 2 -picrylhydrazyl (DPPH) radical scavenging assay18 and 2,2-azinobis(3-ethylbenzothiazoline-6-sulfonic acid) (ABTS●+) radical cation decolorization assay19. The results are tabulated in Tables 1 and 2 and represented by Figure 1 and 2.

The (ABTS●+) assay was carried out using the improved assay of RE et al., which is based on the oxidation of ABTS with potassium persulfate leading to (ABTS●+).

In this method, paper disc impregnated with compounds dissolved in solvent DMF at concentrations 25, 50 and 100µg mL-1. Then the disc impregnated with the solution was placed on the surface of the media inoculated with the bacterial strain. The plates were incubated at 35°C for 24 hours for bacterial cultures. After incubation, the zones inhibition around the disc were observed. Each testing is done in triplicate. Ciprofloxacin at conc. 50 µg mL-1 was used as standard drug for antibacterial activity20-21. Results were interpreted in terms of diameter (mm) of zone of inhibition. The % Activity Index for the complex was calculated by the formula as under:

The plates were incubated at 25°C for 48 hours for fungal strains. After incubation the growth inhibiting zones around the disc was observed. Growth inhibiting zone indicates that the compounds inhibit growth of microorganism22-24. Each experiment is done in triplicate. Griseofulvin at concentration 50 µg mL-1 was used as standard drug for antifungal activity. Results were interpreted in terms of diameter (mm) of zone of inhibition. The percentage inhibition was calculated by the following equation.

Where, C and T are the diameters of the fungal colony in the control and the test plates, respectively.

Minimum inhibitory concentrations (MICs) are defined as the lowest concentration of antimicrobials that inhibit the visible growth of a microorganism after overnight incubation at 37°C. Determination of the MIC is a semiquantitative test, which gives an approximate idea of the least concentration of an antimicrobial (test) solution needed to parent microbial growth. The MIC was determined by the liquid dilution method. Two gram positive bacteria (Staphylococcus aureus and Bacillus subtilis) and two gram negative bacteria (Escherichia coli and Pseudomonas aeruginosa) were used as quality control strains. For the antifungal activities of the compounds Candida albicans and Aspergilius niger were tested. Ciprofloxacin and Griseofulvin were used as standard antibacterial and antifungal agents. The stock solutions of test compounds with 1 to 20µg /mL concentrations were prepared with aqueous methanol. Inoculums of the overnight culture were prepared.

In a series of tubes, 1 mL each of stock solutions of test compound with different concentrations was taken and 0.4 mL of the inoculums was added to each tube. Further 4.0 mL of sterile water was added to each of the test tubes. These test tubes were incubated for 22-24 hours and observed for the presence of turbidity. The absorbance of the suspension of the inoculums was observed with spectrophotometer at 555 nm. The end result of the test was the minimum concentration of antimicrobial (test) solutions, which gave clear solution, i.e. no visual growth. The activity indices of tested compounds against certain bacteria and fungi were calculated and the results are tabulated in Tables 3 and 4. 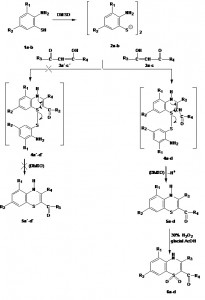 A mixture of 2-aminobenzenethiols 1a-b and β-diketone/β-ketoester 3a-c was heated under reflux conditions in DMSO, which led to condensation and oxidative cyclization. Oxidation of 2-aminobenzenethiols produced bis-(2-aminophenyl) disulfide 4a-d, which in turn underwent cyclization to form 4H-1, 4-benzothiazines 5a-d by Scission of a sulfur-sulfur bond. This cleavage is due to high reactivity of the α-position of the enaminoketone system towards nucleophillic attack. Compounds 5a-d were converted into their corresponding sulfones 6a-d by treatment with 30% hydrogen peroxide in glacial acetic acid.

The structures proposed to the synthesized compounds are well supported by spectroscopic data and elemental analysis. In the IR spectra of compounds 5a-d, a single peak is seen in the region of 3300-3210 cm-1 due to NH stretching vibration. These compounds also exhibit a band at 1610-1590 cm-1 due to C=O stretching vibrations. A slight shift, towards higher frequencies is observed for sulfone derivatives 6a-d due to an increased electron-accepting ability of sulfones compared with the parent system.

The signals for C-S stretching vibrations in the region of 1070-1048 cm-1 are also observed in the IR spectra of compounds 6a-d. The given structures of products 5a-d and 6a-d are fully consistent with their 1H NMR spectra. A multiplet in the region of d8.23-6.56 ppm is due to the the presence of aromatic protons in all compounds 5a-d, and 6a-d. A singlet in the region d9.09-8.18 ppm can be ascribed to the NH function. The given compounds 5a-d, and 6a-d are also fully consistent with their 13C NMR spectra. Spectral and chemical analysis result is shown in Tables 5-13.

TABLE 10 CHARACTERISTIC VIBRATIONS OF THE SULFONYL GROUP IN THE 4H-1, 4-BENZOTHIAZINE SULFONES 6a-d (in cm-1).

* The bands given in brackets refer to sulfones 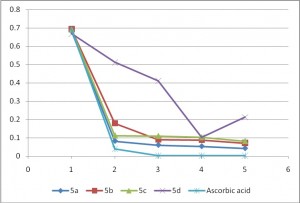 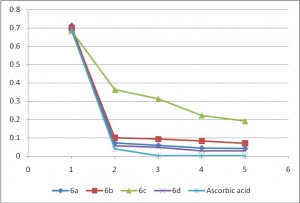 FIG. 1 and 2. THE EFFECT OF TIME ON SUPPRESSION OF ABSORBANCE OF ABTS BY SYNTHESIZED BENZOTHIAZINES AND THEIR SULFONE ANALOGUES.

The antibacterial and antifungalactivity increases with increase in concentration of test compounds. In general the presence of electron withdrawing group on the aromatic ring increases the antimicrobial activities of tested compound compared to compounds having electron donating groups. All the synthesized compounds were evaluated for their antioxidant, antibacterial and antifungal activity and all these have shown moderate to higher activity against the test assay and microbes.

All the melting points were determined in open capillary tubes and are uncorrected. 1H NMR and 13C NMR spectra (by broad band proton decoupling technique) were recorded on JEOL AL-300 spectrometer at frequencies of (300.40 and 75.45 MHz) respectively, in DMSO-d6 using TMS as an internal standard. IR spectra were recorded in KBr on SHIMADZU 8400S FT-IR spectrophotometer.

The FAB (fast atom Bombardment) mass spectra were recorded on a JEOL SX 102/DA-600 mass spectrometer using Ar/Xe as FAB gas at an accelerating voltage of 10 KV. The purity of compounds was checked by TLC using silica gel

'G' as adsorbent, visualizing these by UV light or in an iodine chamber.

ACKNOWLEDGEMENTS: The authors are extremely thankful to the Head, Department of Chemistry, University of Rajasthan, Jaipur for providing necessary facilities. The financial support by CSIR, New Delhi is duly acknowledged.