The metal complexes with Schiff’s base derived from chalcone and thiosemicarbazone have been extensively studied and have exhibited medicinal properties 8. Copper (II) complexes have found possible medicinal uses in the treatment of many diseases including cancer.9 Semicarbazone of various transition metals have been investigated owing to their coordination capability and pharmaceutical activity10-12. Schiff’s bases make them more effective in attaining high coordination structure13. Since Domagk’s original report14 on the anti-tubercular activity of thiosemicarbazones, the number of papers on the pharmacology of these compounds has expanded dramatically. They have also been found to be active against influenza 15, small pox 16, and certain kinds of tumor17 and have been suggested as possible pesticides and fungicides 18. Their activity has frequently been thought to be their ability to chelate with tracer metal.

P-Fluoroacetophenonethiosemicarbazone was prepared after the method of compainge and Archer.19 F- Fluoroacetophenone (2.52 ml, 20 mmol) was dissolved in ethanol (50ml) in a round bottomed flask and heated on a water bath for 5-10 minutes. This hot solution was treated with a hot ethanolic solution (50 ml) of thiosemicarbazone (1.80g, 20mmol) and refluxed for 4-5 hrs on water bath using reflux water condenser. The change in color of solution indicates the formation of P-Fluoroacetophenone thiosemicarbazone (2a-d). on cooling the reaction mixture the cream coloured product crystallized out which was filtered off under water suction and further recrystallized from absolute ethanol and finally dried over anhydrous cacl2 in a vacuum desiccators.

P-Fluoroacetophenonethiosemicarbazone (1.816g, 8mmol) was dissolved in ethanol (20ml) and heated on a water bath. This solution was slowly treated with an aqueous solution of metal salt Feso4.6H20 (0.6076g, 4mmol) in 2:1 molar ratio with string. Reaction mixture was refluxed on water bath for 1-2 hrs and left overnight to yield the crystalline dark green coloured crystals, which was filtered off under suction washed with water till filtrate become colourless. The product was finally washed with dilute ethanol and dried over fused cacl2 in vacuum desiccators. 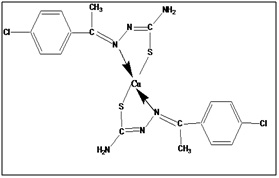 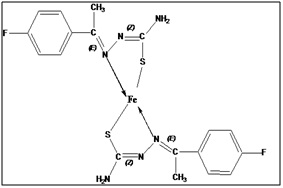 In the IR spectra of substituted acetophenone a sharp absorption band from 1780-1650 cm_1 is observed due to acetophenone >C=O and at 1620 cm-1 due to >C=C< stretching vibration.

Formation of substituted acetophenones thiosemicarbazone was confirmed by the disappearance of absorption band from  1720-1650 cm-1 due to carbonyl group (>C=O) and appearance of new absorption bands from 3400-3350,3320-2800,and 1200-1045 cm_1 assinged to –NH2, -NH and >C=S stretching vibrations, respectively in their IR spectra. Similarly, in 1H NMR spectra an additional broad singal at δ 2.85 ppm appears due to –NH2 and a sharp singlet at δ 10.82 ppm due to –NH- protons are observed which further support the formation of compounds.(2a-d).

In the IR spectra of the ligands and complexes only selected absorption peaks are discussed, which are important for ascertaining the doner sites of ligands. In the in spectra of metal complexes of substituted acetophenone-thiosemicarbazones the presence of absorption band at 3380cm-1 due to –NH2 (symmetric) and at 3380cm-1due to-NH2 (asymmetric) modes remain almost unaltered. This clearly indicates the noninvolvement of this group in complexation reaction 20-21 but slight displacement of these frequencies is due to increased positive charge on nitrogen atom arising from the donation of electron pair from sulfur of thioamide moiety which is involved in chelation 22-23.  Sharp absorption band from 3280-2850cm-1 which was due to NH- in ligands disappear in complexes indicating possible deprotonation on the β-nitrogen after complextion with metal ion 24-27.A new absorption band in the complexes at 445-432 due to (M-N) confirm the metal nitrogen bond in the complexes 28-29.

All compounds have been characterized on the basis of spectral (IR, NMR) studies and elemental analysis. IR spectra (400-4000cm-1) were recorded using a KBr. Central drug research institute (CDRI), Lucknow and Department Of Chemistry, University of Rajasthan, Jaipur. 1H NMR spectra were recorded on Brucker spectrometer (300 MHz) at CDRI, Lucknow using CDCl3/DMSO as solvent. TMS was taken as internal standard.  C, H, N and s analysis of these compounds have been done using Coleman C and H analyzer. Melting points were determined in open glass capillaries and are uncorrected. The purity of compounds was checked by TLC using silica gel-G as adsorbent and visualization was accomplished by UV light or iodine adsorption.

All compounds are crystalline dark coloured solides, have fairly high melting points and are sparingly soluble in common organic solvents and are insoluble in water.

BIO-EFFICACY: Some representative compounds were screened for their antibacterial  and antifungal efficacy. Bis (F-Fluoroacetophenonethiosemicarbazone) iron (II) 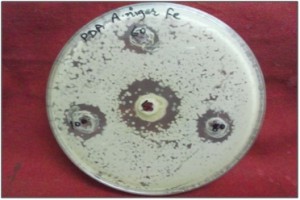 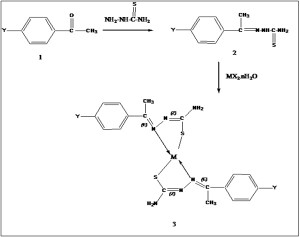