SYNTHESIS, SPECTROSCOPIC CHARACTERIZATION AND EVALUATION OF ANTI-TUMOR PROPERTIES OF NOVEL FATTYACID CONJUGATES OF 2, 4 AND 2, 6-DIISOPROPYLPHENOL

SYNTHESIS, SPECTROSCOPIC CHARACTERIZATION AND EVALUATION OF ANTI-TUMOR PROPERTIES OF NOVEL FATTYACID CONJUGATES OF 2, 4 AND 2, 6-DIISOPROPYLPHENOL

ABSTRACT: The present study enumerates the synthesis, spectroscopic characterization, and evaluation of antitumor properties of esters of two fatty acids viz., 5-hexenoic acid and iso- ricinoleic acid with 2, 4- or 2, 6-diisopropylphenol (Propofol). Propofol is a potent intravenous hypnotic agent which is widely used for the induction and maintenance of anesthesia and for sedation in the intensive care unit. Propofol also possess anti-cancer properties in addition to its sedative effects. Cytotoxicity of all the synthesized compounds was examined against a panel of four human solid tumor cell lines, SK-MEL, KB, BT-549, SK-OV-3, and one human leukemia cell line, HL-60. To compare their tumor selectivity over normal cell lines, VERO cells were also included. The results indicate that these novel conjugates might represent a new class of anti-tumor agents that possess selectivity toward cancer cells over normal cells.

INTRODUCTION: Dietary factors are well known to play an important role in cancer. About 55% of all cancers have been related to nutritional habits. Good nutrition is especially important for people with cancer. That is because the illness itself, as well as its treatments, may affect our appetite. It is now popular, to use diet or natural dietary supplement against cancer. Current trends in the treatment of human cancers favor drug combinations that result in improved responses, where the contributions of a variety of fatty acids have been proved highly significant1. A number of fatty acids are part of our diet; therefore, nutritional dietary supplements highly enriched in certain fatty acid have been suggested to prevent the side effects of cancer therapy2, 3.

Certain triglycerides and fatty acids have the potential to prevent or inhibit carcinogenesis4, 5.

The potential of FA to reduce or eliminate the multidrug resistance to cancers in humans or animals and to prevent the side effects of chemotherapy6 is known from the literature. There is also evidence that submicron-sized lipid emulsions with lipophilic drugs entrapped in the oil core can act as a novel drug carrier system with many potential applications7.

Hydroxy unsaturated fatty acids have been shown to play an important role in inhibition of various type of cancer and manifest less side-effect when compared to standard chemotherapeutic agents8, 9.

The unsaturated fatty acids are taken up rapidly by tumor cells10 and their hydrophobic nature facilitates their rapid incorporation into the lipid bilayer of cells11 resulting in disruptionof membrane structure and ﬂuidity12. On the basis of these characteristics, unsaturated fatty acids are now being used exogenously to enhance the anticancer activity of various chemotherapeutic agents13, 14 and for tumor-targeting drug delivery. Fatty acid substituents on propofol 1may lead to analogs with enhanced cytotoxicity, but this strategy has not yet been explored except in a few studies15, 16.

Propofol (2,6 diisopropylphenol) is the most extensively used general anesthetic sedative agent employed today17 and is nontoxic to humans at high levels (3 to 8 μg/ml; 20 to 50 μM)18 . Propofol is a potent antioxidant19 and has been shown to stimulate protein kinase C20.

It also acts as a vasodilator and bronchodilator and has recently been shown to possess anti-inflammatory properties21. Although the exact signaling systems responsible for these effects are unclear, it does indicate that propofol alters signaling pathways within cells. Although most studies concerning the mode of action of propofol have concentrated on its action as an anesthetic, there are a few reports indicating that this compound may also affect cellular processes related to cancer.

Clinically relevant concentrations of propofol (3 to 8 μg/ml) were reported to decrease the metastatic potential of human cancer cells, including HeLa, HT1080, HOS and RPMI-7951 cells22.

The conclusion from these studies was that propofol induces apoptosis through both a cell-surface death receptor (extrinsic) and the mitochondrial (intrinsic) pathway. These studies suggest that propofol possesses anticancer properties in addition to its sedative effects. We recently demonstrated the efficient synthesis of FA-based derivatives of 1and 2 and their significant in vitro selectivity for inhibiting the growth of cancer cells over normal ones.  The fattyacids incorporated here are iso-ricinoleic acid (isolated from indrajav seeds) and 5-hexenoic acid.

Holarrhena antidysenterica, popularly known as „Indrajav‟ is a shrub, distributed throughout India up to an altitude of 3,500 ft and even as far south as Travancore. It belongs to the family Apocynaceae. In Indian traditional medicine, this plant has been considered as a popular remedy for the treatment of dysentery, diarrhea, intestinal worms23. Seeds also possessed anti-diabetic activity24. 5-hexenoic acid is an unsaturated, acyclic and monocarboxylic acid. It has been used as a pharmaceutical intermediate. Various salts of 5-hexenoic acid and their ester derivatives exhibit anti-vasoconstrictor, anti-thrombosis and anti-bronchoconstrictor activities25. A diketo acid derivative i.e. 6-[1-(4-fluorophenyl) methyl-1H-pyrrol-2-yl)]-2, 4-dioxo-5-hexenoic acid ethyl ester, reported to inhibit the HIV-1 RNAse H activity with an IC50 value of 13μM.

We demonstrated the efficient synthesis of FA-based derivatives of propofol (2,6 and 2,4-diisopropylphenol). (Scheme 1 and 2) and their significant in vitro selectivity for inhibiting the growth of a panel of four human solid tumorcell lines, SK-MEL, KB, BT-549, SK-OV-3, and one humanleukemia cell line, HL-60. To compare their tumor selectivityover normal cell lines, VERO cells were also included.

Infact, 5-hexenoic acid has been coupled with propofol for the first time; it is a novel antitumor analog of propofol reported by our lab.The results indicate that these novel conjugates might represent a new class of antitumor agents. 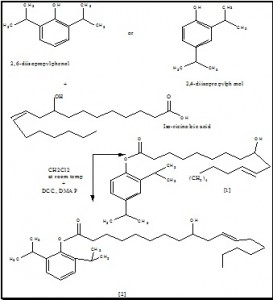 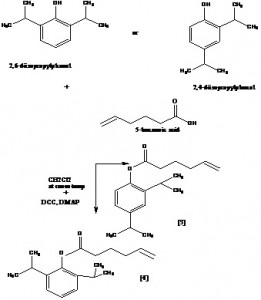 In vitro screening of new drug candidates against human cancer cell line panel are carried out and results are tabulated in Table 1. All the cell lines are from the American type Culture Collection (Manassas, VA, USA). The cells will be cultured in 75-cm2 culture flask, supplemented with bovine calf serum and amikacin at 37°C, human culture techniques. Cell counts were made after 48hrs of incubation.

Cells will be seeded to the wells of the plate at a density of 25,000 cells/ wells and were allowed to grow for 48hrs at 37°C. Diluted samples were added to cells and again incubated for 48hrs at 37°C. The number of viable cells was determined using modified Neutral Red assay procedure. Cells were washed with saline and incubated for 90 minutes with the medium containing Neutral Red.

IC50 (the concentration of the test compound that caused a growth inhibition of 50% after 48hrs of exposure of the cells) were calculated from the dose curves generated by plotting % growth vs. the test concentration on a logarithmic scale. All the assays were performed in triplicate and then mean values will be considered.

RESULTS AND DISCUSSION:The present investigation, involved the synthesis of a class of novel compounds by directly conjugating FA with propofol. Respective two isomers of propofol were conjugated with selected FAs. Synthetic methodology was based on the coupling of the hydroxyl function (1C-OH) present in the propofol with the terminal carboxylic group of FA to synthesize a specific ester. Quantitative formation of the compounds was achieved with the help of DCC as a coupling reagent and DMAP as a catalyst. As a catalyst, DMAP is essential for esterification, especially in concentration range of 10 mole%. The DCC/DMAP method is a more suitable synthetic route with mild reaction conditions, higher yield and convenient product purification.

Results show that the synthetic process produced the propofol-FA analogs. Separations by TLC, infrared spectroscopy, NMR and mass spectroscopy confirm the identity of the compounds. The absorption peaks of the two compounds were quite distinct from their parent controls. Also, in infrared absorption spectra the presence of an ester bond, aromatic C-H absorbance, and absence of free -OH group absorbance, all confirmed the formation of the compounds.

The presence of carbon and hydrogen ions in structure of new compounds was determined by 1H NMR and 13C NMR spectra. When NMR signal in compounds were compared with the parent propofol (Siddiqui et al., 2005), the hydroxyl proton signal at about 4.82 ppm in 2, 6-propofol was not observed in the spectra of compounds. The absence of signal of hydroxyl group in 1H spectra of the compounds confirms the synthesis of new products different from parent compounds.

After isolation of 9-hydroxy-11-Z-octadecenoic acid from the seed oil of Holarrhena antidysenterica, it was characterized by various spectroscopic techniques including IR, 1HNMR, 13CNMR and Mass spectroscopy. The IR spectra of the compound revealed strong absorption bands at 1710.8 cm-1 and 1216.9 cm-1 corresponding to C=O and C-O bonds respectively, indicating the presence of carbonyl carbon.

IR spectra revealed a sharp band at 1640.0 cm-1 indicating the presence of double bond which is further related to chemical shifts at ∂H 5.37(m, 1H) and 5.84(m, 1H) ppm for the two olefin protons 11H and 12H respectively and their respective carbon signals appeared at ∂C 129.07 and 130.63. All of these signlas and other peaks correspond to the data published previously29.

This compound has a methylene interrupted 9-hydroxy and Z-11- olefin system in its C-18 fatty acid moiety. The formation of compound 1 i.e., 2, 6 isomer of propofol-isoricinoleic acid conjugate was confirmed by various spectroscopic studies and the signals observed corresponds to the previously published data29.

Compound 2 i.e., 2, 4-diisopropylphenol-isoricinoleic acid conjugate also has a methylene interrupted 9-hydroxy and Z-11-Olefin system in its C-18 fatty acid moiety. Its formation is also confirmed by various spectroscopic studies. The IR spectrum of the conjugate revealed broad, strong absorption bands at 1735.0 and 1210cm-1which are attributable to C=O and C-O bonds, respectively, and indicate the presence of an ester, which was also confirmed by the presence of a significant carbon signal at ∂C 172.73 showing the presence of carbonyl group.

The novel propofol analogs (1,2,3,4) were assayed for their in vitro antitumor activity against a panel of four human solid tumorcell lines, SK-MEL, KB, BT-549, SK-OV-3, and one humanleukemia cell line, HL-60. To compare their tumor selectivityover normal cell lines, VERO cells were also included. The present work is based on FA analogs of propofol isomers. The cytotoxic potencies of these compounds are expressed in terms of IC50 values, as shown in TABLE 1. Compounds [1] to [4] showed significant cytotoxicity to all cancer cells tested.

They did not affect the growth of VERO cells up to the highest concentration of 15 μM in the assay, thus demonstrating selectivity toward the tumor cells. Compounds 3and 4were the most active analogs, with IC50 values ranging from0.32 μM for SK-OV-3 cells to 0.4 μM for SK-MEL, compound [1] and [2] possessed strong anti-cancer activity ranging from 0.31 to 0.36 for HL-60 cells. The significant anti-cancer activity of compounds [1] and [2] is attributed to the presence of a methylene interrupted 9-hydroxy and Z-11- monounsaturation in its C-18 fatty acid moiety.

Compounds [3] and [4] possessed a terminal unsaturated bond and are the monoene FA analog that were found to be active against all tumor cell lines and show significant anti-cancer activity ranging from 0.36 and 0.42 for BT-549. Interestingly, none of them showed any cytotoxicity to normal cells.

TABLE 1. CYTOTOXICITY OF COMPOUNDS IN A PANEL OF CANCER CELL LINES AND KIDNEY FIBROBLAST CELLS

The above results demonstrated that all of these propofol FA conjugates (1,2,3,4) not only inhibited cellular proliferation of a panel of four human solid tumorcell lines, SK-MEL, KB, BT-549, SK-OV-3, and one humanleukemia cell line, HL-60, but also decreased their viability which was confirmed by cell viability assay using modified Neutral Red assay procedure. These results suggest that the propofol-fatty acid conjugates are far more effective at inducing apoptosis in SK-MEL, KB, BT-549, SK-OV-3 and HL-60 than are the unconjugated parent compounds i.e. 2, 6/2, 4-diisopropyl phenol and 5-hexenoic acid and isoricinoleic acid.