Categories Menu
Home » SYNTHESIS, SPECTROSCOPIC, THERMAL STUDIES AND BIOLOGICAL ACTIVITY OF A NEW SULFAMETHOXAZOLE SCHIFF BASE AND ITS COPPER COMPLEXES

SYNTHESIS, SPECTROSCOPIC, THERMAL STUDIES AND BIOLOGICAL ACTIVITY OF A NEW SULFAMETHOXAZOLE SCHIFF BASE AND ITS COPPER COMPLEXES

SYNTHESIS, SPECTROSCOPIC, THERMAL STUDIES AND BIOLOGICAL ACTIVITY OF A NEW SULFAMETHOXAZOLE SCHIFF BASE AND ITS COPPER COMPLEXES

ABSTRACTA new Sulfamethoxazole Schiff base (E)-4-(4-methoxybenzylideneamino)-N-(5-methylis-oxazol-3-yl) benzenesulfonamide (C18H17N3O4S), and its copper complex were synthesized and the structures elucidated on the basis of Physiochemical methods. The studies indicate an octahedral structure for the complexes with the (C22H27N3O10SCu) formula. The IR spectra suggest that the ligand act as tridentate (from oxygen and two nitrogen atoms) donor. Also the biological activity of the Schiff base and its Cu complex were studied

INTRODUCTION: Schiff base compounds which contain the azomethine (imine) group (–RC=N–) are usually prepared by the condensation of a primary amine with an active carbonyl compound 1.  It has been often used as chelating agents (ligands) in the field of coordination chemistry and Schiff base metal complexes were of great interest for many years. It is well known that O and N atoms play a key role at the active sites of numerous metallo biomolecules in the coordination with metals 2.

Later, a great number of sulfanilamide derivatives were synthesized, characterized and tested as antibacterial agents, with many derivatives currently used for the treatment of bacterial infections.

Such sulfonamide derivatives widely used in clinical medicine as pharmacological agents with a wide variety of biological actions, were designed from the simple sulfanilamide lead molecule 3, also Schiff base known as anticancer and antiviral agents 4, and its metal complexes have been widely studied because they have industrial, anti-fungal, anti-bacterial, anticancer herbicidal applications 5, anti-tubercular activities 6 and chelating abilities which give it attracted remarkable attention 7. Sulfa drugs had attracted special attention from their therapeutic importance as they were used against a wide spectrum of bacterial ailments 8.

While  Elemental analysis, 1HNMR spectra which recorded by a Varian, USA, Gemini 200 MHz Spectrometer in DMSO-d6 were taken at Micro-analytical Center, Cairo University, Cairo, Egypt and Magnet susceptibility measurement of the complexes were determined at room temperature  by the Faraday method and at Faculty of Science,  Cairo University.

Synthesis of Schiff base (I): The Schiff-bases (I) was prepared as in Scheme 1 by the usual condensation reaction 9, in which p-methoxybenzaldehyde (0.1 mol) was drop wisely added to the amine (Sulfameth- oxazole) (0.1 mol) with continuous stirring, (drops of triethylamine 10, was added).  After complete addition the reaction mixture was heated under reflux for about four hours. The product (imine) was separated after cooling at room temperature by filtration.  The isolated compound was purified by recrystallization from ethanol. After one week orange prisms of Schiff base (I) was obtained, and the melting point was found to be 202oC.

SCHEME 1: SYNTHESIS OF SCHIFF BASE (I)

Synthesis of Schiff base Metal Complexes: A solution of the copper acetate (CH3COO)2.Cu. H2O (0.01 mol) in absolute ethyl alcohol was added drop wise  to equimolar amounts of Schiff base (0.01 mole) (I). After complete addition of the metal salt the reaction mixture was heated under reflux for six hours, the product separated after cooling, by filtration and recrystallization from ethanol to give solid products (Ia) (Scheme 2).   Yield = 59.50 % (0.35g), and the m.p., of the complex is >300 º C.

The structures of Schiff base (I) (C18H17N3O4S); was elucidated on the bases of:

Finally, the bands at 1336 and 1162cm–1 represent the asymmetric and symmetric stretching frequencies, respectively, of the sulfonyl group (S =O str) 12, 13.

The structure of Schiff base Copper complex (Ia) was   elucidated on the bases of: 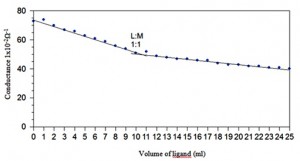 Magnetic Measurements: Magnetic susceptibility was measured by the Faraday method at room temperature , the effective magnetic moment  μeff , of complex Ia found to =1.92 BM; which confirms  the octahedral geometric of the complex as expected 16.

IR Spectra: Comparing the IR spectra of the complexes and the free ligand, the following differences were observed:

TABLE 1: IR DATA OF SCHIFF BASE AND ITS COMPLEX

Thermal Analysis: The thermal studies of Cu (II) metal complex was carried out using the thermogravimetric (TG) and differential thermal analysis (DTA) techniques represented in Fig. 2; to obtain information about their thermal properties as well as about the nature of intermediate and final products. The heating rate was suitably controlled at 10oC under nitrogen atmosphere and the weight loss was measured from the ambient temperature up to 1000°C, using α-Al2O3 as the reference. The temperature ranges of decompositions and the corresponding mass loss of species are given in scheme 3; table 2.

Thermogram of Cu- complex indicated a total weight loss of 75.56% up to 1000°C, which is observed in four successive decomposition steps. The 1st decomposition step with an estimated mass loss of 4.956 % (=29.19 g/mol) within the temperature range 159- 181°C may be attributed to the liberation of 1.5 coordinated water molecule. The 2nd decomposition step within the temperature range 181-337oC, with an estimated mass loss of 34.388 % (=202.54 g/mol), which is reasonably accounted for the removal of (4-methoxyphenyl) methanimine, ½ H2O and isoxazole.

Kinetics of thermal decomposition of some prepared complexes: The calculated values of ∆E, ∆S, ∆H and ∆G for the decomposition steps are given in Table 3. The values were obtained, by using Excel computer program by Prof. A. Soliman et al., 19. C22H27N3O10SCu complex showed considerable thermal stability which is reflected from the moderately high values of the activation energy averaged to 50.17 kJ mol–1, the entropy change, ΔS, for the formation complex is in negative values.

The negative sign of the ΔS suggests that the degree of structural complexity (arrangement) of the activated complex was lower than that of the starting reactants and the decomposition reactions are slow reactions. The ΔHo value and its sign, is dependent on the heat of formation of the complex and the solvent effect 20, in all cases, it is found that the ΔHº values are positive, so the Reactions are endothermic.

TABLE 3: THE KINETIC AND THERMODYNAMIC DATA OF THE THERMAL DECOMPOSITIONS OF (IA)

Further, degrades with the subsequent loss of (benzene ring) species forming species with peak at m/e= 290. Then two acetate group leaving a peak at 172 finally all atoms evaporate leaving copper oxide with peak at m/e 78 represents the stable species with 33.31% abundance. The mass spectra data confirm that the complexes were present, when supported by our additional analyses. The formula is in agreement with the mass spectral data.

Biological Activity: The antibacterial and antifungal  activity 21 of the Schiff base (I) and its  Cu complex (Ia) was done in comparison with Penicillin G and Streptomycin for anti-bacterial Clotrimazole and  Itraconazole for antifungal as standard. All the selected strains two of bacteria and four of fungi namely; {Staphylococcus aureus and Bacillus (Gram +ve) and Pseudomonas aeruginosa and Escherichia coli (Gram -ve) and Aspergillus fumigates, Geotrichum candidum, Candida albicans and Syncephalastrum racemosum} showed sensitivity to all derivatives and compound I and Ia had shown good activity against all the tasted bacterial and fungal except Syncephalastrum racemosum.