INTRODUCTION: Hypothyroidism (HT) is one of the commonest metabolic disorders affecting 4 to 5% of the population in the developed world 1 and their confirmation with laboratory tests is generally required. Recent reports indicate that more than 10% of Indian adults are hypothyroids with prevalence being higher in females and older population 2 and the diametrically opposite disorder, hyperthyroidism, has a prevalence of just 1.8%. 3

Thus hypothyroids and euthyroids constitute most of the population. According to current guidelines of American Thyroid Association (ATA), the most “important and sensitive” laboratory test to identify primary HT is elevated levels of Thyroid stimulating hormone (TSH) in the blood. 4 Although TSH levels alone may not accurately represent the degree of HT, an elevated level is a very reliable criterion for diagnosis of primary hypothyroid state. 5

Muscle damage is associated with the release of various “muscle markers” like CK and lactate dehydrogenase (LDH) .8 CK shows heterogeneity across race and gender. 9 Reports on muscle markers in Indian hypothyroid population are not very well documented. This prompted us to study the association of CK and LDH with TSH, total T3 and total T4 in hypothyroids attending our hospital. We limited our study to females, the gender that is more likely to be afflicted by the disorder.

This prospective study was conducted on OPD patients of a tertiary care hospital in Bangalore, Karnataka (Southern India) in the year 2014. The patient samples were randomly selected for the hypothyroid and euthyroid control group from those who had been advised estimation of T3, T4 and TSH. As further tests were performed on these pre-drawn samples, no consent was taken from patients. Although normal reference ranges of LDH levels in males and females are comparable (males: 135-225 U/L; females: 135-214 U/L), the same is not true for CK (males: 39-308 U/L; females: 26-192 U/L). HT being commoner in females, we selected only female subjects for the study. The normal reference levels (as per our hospital guidelines) of TSH, total T3 and total T4  are 0.34 and 5.6 µU/ ml, 1.3 to 2.87 nmol/ L  and 77.9 to 156.5 nmol/ L respectively. 60 subjects who had a TSH level higher than the upper reference range were suspected to be hypothyroids and included in our study. 30 age matched euthyroids who had TSH levels within the normal range were included in the control group.

All values are in Mean± SD 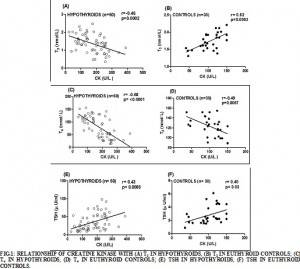 DISCUSSION: Associated myopathy is a common feature of most endocrine disorders, including HT, but is neglected as it is frequently not the presenting complaint. Also it is usually reversible with correction of hypothyroid state .10 It is well know that T3 is biologically more active than T4 but only a minor part of T3 is produced directly by the thyroid gland. The major fraction is produced peripherally through deiodination of T3, mainly by type 1 and 2 iodothyronine deiodinases (ID). The IDs are present in various tissues, but it has been shown that type 2 ID of skeletal muscles is the major converter of T4 to T3 both in euthyroid and hypothyroid state. 11 Skeletal muscle itself is a target tissue for thyroid hormones action. 12 In hypothyroids, pain/cramps/stiffness of muscles are not uncommon and mild proximal muscle weakness (myopathy) occurs in more than a third of patients.10  Biochemical  abnormalities in hypothyroid muscle pivot around flawed energy production like faulty glycogen breakdown, defective enzymes and mitochondrial oxidative dysfunction Histochemical studies have shown atrophy and change in fast twitching type 2 muscle fibers to slow twitching type 1 muscle fibers in hypothyroids .14 Damaged muscle fibers release “muscle markers” like CK and LDH into the blood stream and both have shown increased levels in hypothyroid myopathy. 15 It is also noteworthy that CK levels are higher in males and in individuals with greater muscle mass. 16

Previous studies have shown that serum CK levels increase with increase in the degree of HT and that in hypothyroids CK shows a negative relationship with the levels of T3 and T4 .7, 16 Our study which measures total T3 and T4 supports the same.

Another finding, which to the best of our knowledge has not been stressed upon previously, is that total T3 levels show a good positive association whereas total T4 shows moderate negative association with CK in euthyroids. The abovementioned relationship between CK and total T3 is especially remarkable as a good statistically significant association was displayed in-spite of the smaller sample size of euthyroids. Thus our study indicates that (a) in hypothyroids, total T4 is a satisfactory indicator of CK within or beyond its normal range and therefore a pointer of the degree of myopathy and (b) in euthyroids, total T3 is an acceptable indicator of CK within the normal range. In South India, where the study was conducted, female hypothyroids have a prevalence of 11.5% and hyperthyroids of only 1.8%. 3 Thus we propose that once the thyroid status is known, thyroid hormones themselves have the potential of acting as an additional diagnostic tool for evaluation of CK levels in most of the female population. It might be noted that although recent ATA guidelines 4 recommend the measure of free thyroid hormones for diagnosis of thyroid conditions, the old practice of estimating total thyroid hormones is still followed in many laboratories due to logistic reasons.

The divergent directions of T3 and T4 in relation to CK in euthyroids point towards a relationship between the three. As a possible explanation, our preliminary suggestion is that in euthyroids, who have relatively undamaged muscles, elevated CK might be a partial reflection of increased muscle mass. We further make the assumption that larger mass of healthy muscle might result in a larger amount of type 2 ID and a consequential higher level of T3. This appears physiologically reasonable because skeletal muscles themselves are a target tissue for thyroid hormone action. This assumption based explanation runs the danger of being inaccurate or an oversimplification. Larger and more elaborate studies to explore these findings are suggested.

This study also shows that both in euthyroids and hypothyroids, TSH shows only a moderate positive association with CK. This is in accordance with a previous report which indicates that although TSH has high accuracy for early diagnosis of HT, it is a poor measure for estimating the clinical and metabolic severity of primary HT. 5 Hypothyroids, in the study, did show an increased level of LDH (above 20%) when compared to euthyroids but the correlations of thyroid hormones with LDH were largely insignificant and much weaker than that of the same with CK. There are a number of limitations in this study. Free T4 and other muscle markers like myoglobin were not measured. They could have given the study higher precision and greater depth. Males and hyperthyroid females were not included, which if done, could have increased the reach of this study.

CONCLUSIONS: Total T3 and total T4 seem to be good indicators of CK levels in the majority of female population i.e. the euthyroid and hypothyroid women respectively. The third hormone of traditional thyroid profile, TSH, is a weaker indicator of CK.

ACKNOWLEDGEMENT: We are indebted to the laboratory staff of the Department of Biochemistry, ESIC Medical College and PGIMSR, Rajajinagar, Bangalore (Karnataka), for their technical assistance.

DECLARATION OF INTEREST: The authors have no conflicts of interest.

FUNDING: This research did not receive any grant from any funding agency.

AUTHOR CONTRIBUTIONS: The first two authors are responsible for the design of the study as well as data acquisition and analysis. All the authors contributed equally to the drafting / editing of the manuscript and interpretation of results.