ABSTRACT: Inflammation plays fundamental role in hepatocellular carcinoma (HCC) initiation, progression and metastasis. The over expression of pro-inflammatory factors like Tumor necrosis factor-α (TNF-α), selectin, (IL)-6, nuclear factor-κB, TGF-β can alter the hepatic microvasculature. Natural products such as polyphenols, alkaloids, flavonoids, and flavonols have the ability to interface microenvironment of carcinogenic tissue. In the current study we have established human protein interaction network (HPIN) composed of 21 queries (inflammatory proteins related to HCC) and more than 493 neighboring proteins. This interaction provides some potent receptors for docking of plant based immunosuppressant with pro-inflammatory proteins. We have selected eighteen herbal compounds and docked with receptors (ALDH1, TGFBR1, and P2RY2) using Schrodinger software. The study suggests an integrated approach to normalize the immunological dysregulation for HCC treatment through silibinin, leonurine and quercetin.

INTRODUCTION: HCC involve many genetic alterations that eventually lead to malignant transformation of the hepatocytes. Chronic inflammatory response affects all the stages from cell degeneration to cancer development and their treatment. Dysregulation of pro and anti-inflammatory factor can induce neoplastic lesion 1. The tiny tumour mass scavenge oxygen and nutrients from its surrounding cells and release various chemical signals in the form of cytokines, chemokines, interleukins and macrophages for prolifration of tumour cells.

However, mutation in some intra-cellular molecules like STAT, SMAD and SNAI1 directly or indirectly affect cancer progression 6. HCC initiation occurs due to several mutations in cells that lead to activation of oncogenes as well as deactivation of tumour suppressor genes that provide mutant cells growth and survival advantage. However, these initial mutations are not enough to initiate neoplastic progression, which gives an idea that tumour initiation and progression might be based on consistent supportive signals released by tumour inﬂammatory micro-environment 7.

Current available treatments in HCC are slightly effective and aggravate other associated liver disorder. The immuno-therapy has the ability to maintain nontoxic, long-lasting anti-tumorigenic activity 8. The vast majority of immunostimulants and immunosuppressant in clinical trial have severe cytotoxic drugs with numerous side effects. These plant based compounds open a horizon to strengthen immune system against tumour microenvironment. Usefulness of numerous plant extracts has been highlighted by researchers for their wide range of immunomodulatory effects which can influence immune system of the human body. Phytoconstituents like flavonoids, alkaloids, polysaccharides, diterpenoids, lactones and glycosides have been reported for immuno-modulatory effect 9.

In the present study we have systematically mapped the interactions of several immunological cytokines and pro-inflammatory proteins which are involved in hepato-carcinogenesis. This has helped us to identify the potent receptors to target microenvironment of tumorigenic hepatic cells. Finally, we have docked identified receptors with secondary metabolites present in our daily dietary items. These bioactive molecules possess the potential to inhibit, modulate or enhance immune system against tumorigenesis.

Retrieval of Inflammation Related Protein of HCC for Network Assessment: Extensive data mining was done for retrieval of inflammation related proteins which are differentially regulated in HCC. The UniprotKB (http://www.uniprot.org/) database used for retrieval of their accession numbers. Later, all proteins were assured their involvement in different immunological processes through Gene Ontology Databases.

Protein - Protein Interaction and Target Protein Identification: Databases such as HPRD, BioGrid and STRING were used for protein network generation. All retrieved proteins were queried with each database that contains relevant information on experimentally validated protein - protein interactions. The final assessment of for interaction was done using Pathway linker 2.0 (http://pathwaylinker.org/). It produces a master network of queried proteins along with their intermediate partners. Afterward, this network was analysed for the most followed pathways by the query and neighbouring proteins. This result of involved pathways was listed out along with their P-values (Probability value). The selection of query proteins was unbiased about their role in disease progression. Hence, a hypothesis was framed which explained the possible effects of selected proteins in HCC development. Later, the target receptor proteins were identified accordance of their occurrence in network.

Docking Studies: Eighteen plant-based compounds were retrieved from literature. We have selected only plant based immunosuppressant to reduce inflammatory response in tumour micro-environment (Table 1).

TABLE 1: PLANT BASED IMMUNOMODULATOR AND ITS ANTI-INFLAMMATORY ACTIVITY IN VARIOUS DISEASE CONDITIONS 9-13

Each ligand was prepared in Maestro 9.6 workspace using 2D-Sketcher and later their low energy poses were generated with LigPrep2.8 module of the Schrodinger software. Simultaneously, all identified target proteins were imported from the protein data bank (PDB) directly to the protein preparation wizard of Maestro 9.6. The Prime 3.5 module was used to fill their missing atoms and disordered side chains. Extra water molecules were also removed and Glide 6.1 module with Extra Precision (XP) method was used for docking. All ligands were docked flexibly and only low energy conformations were kept. Further, the most probable immunomodulators were chosen according to their Docking Score and Glide Scores calculated by Schrodinger.

Interaction Analysis and Target Identification: A few inflammatory protein of HCC were collected through extensive literature mining. All proteins were queried for the protein interaction with Pathway linker2.0 and master network were displayed in balls and sticks pattern. Balls represented queried and neighbour proteins and sticks represented the interactions between them. (Fig. 1). These interactions showed the cross talk among protein that occurred due to their involvement in either similar pathways or due their intermittent in some processes. Total 493 interaction proteins were obtained for 21 query proteins. The significance of data was calculated through analyzing P-value. The result showed that all query proteins and neighbouring proteins were significantly involved in hepatocarcinogenesis (Table 2).

TABLE 2: LIST OF MOST SIGNIFICANT PATHWAYS FOLLOWED BY QUERIED AND THEIR FIRST NEIGHBORING PROTEINS

We have observed that out of all 514 proteins some were potentially involved in disease progression (Table 3). Therefore, a master network has been extracted from complete network web using interaction of selected proteins from the network supposedly followed in hepatocarcinogenesis (Fig. 2). 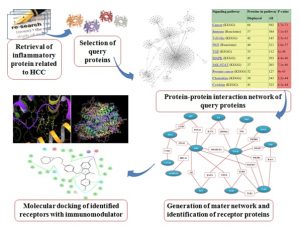 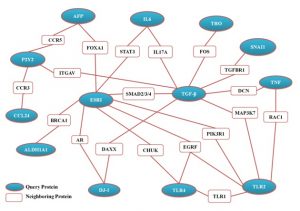 The overall master network represented role of query proteins and their interaction with each other through neighbouring proteins. We have recertified all the interaction through literature. The protein interaction network showed that ESR1, TGF-β, Toll like receptors (TLR2/3/4), EGFR, SMAD, IL6 and P2RY2 plays crucial role in disease progression. All the proteins interact directly or indirectly with each other. We observed some interactions (ESR1/SMAD/TGF-β, TNF-α/TGFB-R1/SNI1, P2Y2/ITGAV/TGF-β, TLR/EGFR/ ESR1, IL6/ STAT3/ESR1, IL6/ IL17A/TGF-β, TGF-β/SMAD7/SNAI1 and ALDH1A1/BRCA1) of query protein with their direct neighbours in the master network were crucial for immunological responses in tumorigenic microenvironment. The increased TGF-β level has seen in the tumour cells and can affect surrounding stroma as well as extracellular matrix to contribute the metastatsis 14. Several immunological factors such as P2RY2, TNF-α, SNAI1 and IL-6, can regulate the expression of TGF-β through ITGAV 15, DCN 16, TGFB1 10 and IL17A 17 respectively. Similarly, over expression of mutated variant of ER1 (ERαδ5) have been seen in the peri-tumoral cirrhotic tissue of HCC patients, which correlated with increased proliferation rates in HCC cases 18. Due to their vital role in immune responses, it interacts with numerous immunological proteins such as TGF-β, AFP, ALDH1A1, DJ-1 and TLRs through their interacting partners SMAD 19, FOXA1 20, 21, BRCA1 22, AR 23 and CHUK 24 respectively.  However, all queried inflammatory markers can affect tumour growth through other factors also, but we have studies only first neighbour proteins.

The overall interaction suggested that tumour microenvironment could be regulated through various inflammatory receptors such as P2RY2, ERS1, TGFR1 ALDH1, and TLRs. We have utilized three receptors (P2RY2, TGFR1 and ALDH1) for docking of immunomodulator.

Docking Studies: The ligands were prepared for their different conformations and energy minimization before molecular docking. All possible poses of each ligand were allowed to dock the receptors. Later, each ligand were analysed according to their glide score. Over all docking score suggested that silibinin has highest binding affinity with ALDH1, Quercetin has binding affinity with P2RY2 and TGFBR1 binds with leonurine (Table 4, Fig. 3). Docking studies suggested that silibinin, leonurine and quercetin have ability to regulate inflammatory responses through inhibition of, ALDH1, TGFBR1 and P2RY2, respectively. Fig. 4 gives a clear view for integrative inhibition of pro-inflammatory factors through selected receptors. Tumour hepatocytes over expressed with ALDH1 has more metastatic potential than other cells 25.

Inhibition of ALDH1 through silibinin can directly affect disease progression. P2RY2 regulate ATP mediated intracellular Ca2+ level in hypoxia condition for cell growth 26 and inhibition of this process using quercetin can suppress the proliferation of tumorigenic cells. Similarly, TGF-β has ability to enhance EMT process 10 and inhibition of its receptor (TGFBR1) through leonurine can arrest this function (Fig. 4). Compounds such as epigallocatechin-3-gallate, phyllanthin, capsaicin and resveratrol also have good binding affinity with the selected receptors.

TABLE 4: GLIDE SCORE OF EACH COMPOUND AFTER DOCKING WITH RESPECTIVE RECEPTORS 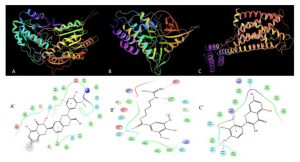 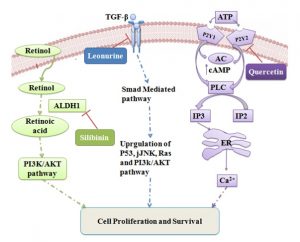 FIG. 4: COLLABORATIVE SUPPRESSION OF TUMORIGENESIS THROUGH SILIBININ, LEONURINE AND QUERCETINE

DISCUSSION: The association of inflammation in carcinogenesis has been reported in many cases. The cancer microenvironment started regulating the tumour behaviour with establishment of tumour cells in tissue 2. The present study reports, a protein-protein interaction network of crucial inflammatory protein and generated a dense mesh of interacting proteins. Out of all interaction master networks were formed using selected proteins, which suggested their involvement in hepato-carcinogenesis (Fig. 1). On the basis of their role, we have selected three proteins TGFBR1, ALDH1 and P2RY2 which can control the expression profile of various inflammatory factors such as TGF-β, TNF-α, and IL6 in diseased condition. ALDH1 plays significant role in detoxification process and its upregulation is associated with perivascular tumorigenic hepatocytes 25.

The previous studies indicate that P2RY2 receptor is over expressed in various HCC cell line to promote the cell viability under hypoxic condition 26. Under inflammatory microenvironment, even TGF-β has ability to stimulate the epithelial-mesenchymal transition (EMT) in HCC patients and their over expression can be directly regulated through TGFBR1 suppression 5. Targeting above mentioned proteins can serve potential therapeutic target in HCC treatment. Several compounds such as alkaloids, flavonoids and flavonols can influence the immune system through immunosuppression or immune-stimulation. These agents can normalize or regulate pathophysiological processes.

In the present study we have observed the highest binding affinity of silibinin, leonurine and quercetin for ALDH1, TGFBR1 and P2RY2 respectively, represented their microvasculature inhibition ability in hepato - carcinogenic environment. Our previous report on silibinin also suggested similar inhibitory effect on other receptors of HCC 11. Our findings are in accordance to the earlier reports on quercetin for its multi-targeted and anti inflammatory activity 12. Leonurine can downregulate the expression of TNF-α, IL-6, iNOS, and COX-2 various disease condition 13. Our study also reports similar agonist binding of leonurine with pro-inflammatory receptors in HCC. Since high dose and long term use of synthetic drugs for HCC treatment causes numerous effects and they also lower the immune response in the patients.

CONCLUSION: In the present study, we propose the use of immunomodulators along with the synthetic drugs for the effective cancer treatment. The current work concludes that out of all immunosuppressants silibinin, leonurine and quercetin can be potential immunomodulators for targeting immune system of HCC patients. This type of approach can open a new dimension for effective cancer treatment.

ACKNOWLEDGEMENT: The authors would like to thank Dr. Ashok K. Chauhan, Founder President, Amity University Uttar Pradesh, and Noida, India, for providing the infrastructure and support.