ABSTRACT More than 50% of pharmaceutical products are orally administered for several Reasons and undesirable taste is one of the important formulation problems that is Encountered with such oral products. Taste of a pharmaceutical product is an important parameter governing compliance. Hence taste masking of oral Pharmaceuticals has become important tool to improve patient compliance and the Quality of treatment especially in paediatrics. Different methods have been suggested for Masking of taste of bitter drugs, which includes, coating of drug particles with inert agents, taste masking by formation of inclusion complexes, molecular complexes of drug with other chemicals, solid dispersion system, microencapsulation, multiple emulsions, using liposome's, Prodrugs and mass extrusion method but ion exchange resin is one of most extensively Used method to overcome this problem. Ion-exchange resins (IER) have received considerable attention from pharmaceutical scientists because of their versatile properties as drug-delivery vehicles. In the past few years, IER have been extensively studied in the development of novel drug-delivery systems (DDSs) and other biomedical applications. Also Recently the New Applications of Ion Exchange Resin like Opthalmic Drug Delivery, Anti-Deliquescence, Improve Solubility, and Polymorphism has confirmed. This review highlights complete account of ion exchange resin and its application in drug delivery research are-discussed.

INTRODUCTION: One of the popular approaches in the taste masking of bitter drugs is based on Ion Exchange resin (IER). IER are solid and suitably insoluble high molecular weight poly- electrolytes that can exchange their mobile ions of equal charge with the surrounding medium. Synthetic ion exchange resins have been used in pharmacy and medicine for taste masking or controlled release of drug as early as 19501. Being high molecular weight water insoluble polymers, the resins are not absorbed by the body and are therefore inert2. The long-term safety of ion exchange resins, even while ingesting large doses as in the use of cholestyramine to reduce cholesterol is an established unique advantage of IER due to the fixed positively or negatively charged functional groups attached to water insoluble polymer backbone. These groups have an affinity for oppositely charged counter ions, thus absorbing the ions into the polymer matrix.

Since most drugs possess ionic sites in their molecule, the resin's charge provides a means to loosely bind such drugs and this complex prevents the drug release in the saliva, thus resulting in taste masking. For taste masking purpose weak cation exchange or weak anion exchange resins are used, depending on the nature of drug. The nature of the drug resin complex formed is such that the average pH of 6.7 and cation concentration of about 40meq/L in the saliva are not able to break the drug resin complex but it is weak enough to break down by hydrochloric acid present in the stomach. Thus the drug resin complex is absolutely tasteless with no after taste, and at the same time, its bioavailability is not affected3. IER have received considerable attention from pharmaceutical scientists because of their versatile properties as drug delivery vehicles. In past few years, IER have been extensively studied in the development of Novel drug delivery system and other biomedical applications. Several IER products for oral and peroral administration have been developed for immediate release and sustained release purposes. Research over the last few years has revealed that IER are equally suitable for drug delivery technologies, including controlled release, transdermal, site-specific, fast dissolving, iontophoretically assisted transdermal, nasal, topical and taste masking systems.

CLASSIFICATION OF ION EXCHANGE RESINS (IER): The various ion exchange materials available can be classified as shown in Fig. 1 on the basis of nature of structural and functional components and ion exchange Process. Ion exchange resins contain positively or negatively charged sites and are accordingly classified as either cation or anion exchanger. 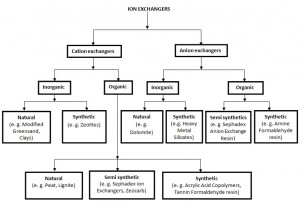 SELECTION OF SUITABLE ION EXCHANGE RESIN: The selection of IER for drug delivery applications is primarily governed by the functional-group properties of the IER5. However, the following points need to be considered during selection:

For example, a low degree of cross linking of the resin will facilitate the exchange of large ions, but it will also cause volume changes in the resin upon conversion from one form to another. Similarly, the use of a strong IER will give a rapid rate of exchange, but it could also cause hydrolysis of the labile drugs because strong IER are effective acid-base catalysts. Therefore, a fine balance of all the parameters needs to be made to achieve optimal performance of drug-delivery systems (DDSs) containing IER.

CHARACTERIZATION OF IER: As the performance of DDSs depends on the quality of IER, it is important to evaluate IER at each stage of the preparation of resinates. The following parameters are generally evaluated:

MECHANISM OF BINDING OF ION EXCHANGE RESIN WITH DRUGS: The principle property of resins is their capacity to exchange bound or insoluble ions with those in solution. Soluble ions may be removed from solution through exchange with the counter ions adsorbed on the resin as illustrated in equation 1 and 2.

These exchanges are equilibrium reactions in which the extent of exchange is governed by the relative affinity of the resins for particular ions. Relative affinity between ions may be expressed as a selectivity co-efficient derived from mass action expression13 given in equation no. 3.

[D]S = Drug concentration in the solution

Factors that influence selectivity include valency, hydrated size, pKa and the pH of the solutions.

Borodkin et al. used selectivity coefficient to express the interaction of eleven amino drugs with potassium salt of polacrin, a polycarboxylic acid resin. When loading of resin with an ion of less affinity, the exchange may be driven towards the direction of unfavorable equilibrium by flooding the influence with high concentration or by using chromatographic column procedures3.

RESINATE PREPARATION: Once the selection of a resin is made, the next step involves preparing its complex with drug, before designing a suitable delivery system. The main hurdle is to optimize the conditions of preparation, in order to obtain the desired drug loading in the resinates. Generally, the following steps are involved in the preparation of resinates:

Preparation of resinate is normally done by two techniques: