ABSTRACT: The solubility, dissolution, and gastrointestinal permeability are the prime factors for drug absorption. Rifaximin is a structural analogue of rifamycin that inhibits RNA synthesis by binding to β-subunit of bacterial DNA-dependent RNA polymerase. Rifaximin is a class 1V drug having low solubility and low permeability. My theme of the design is to develop the technological characterization of dosage by converting the drug into nanoparticles and superdisintegrant technology; the drug undergoes solubility and gastrointestinal permeability. By adopting these technologies, it achieves by enhancing the disintegration time of drug when comes in contact with water. Here I would like to promote the range of method development technologies improving the solubility and permeability of class IV drugs in rifaximin.

INTRODUCTION: The solubility, dissolution, and gastrointestinal permeability are fundamental parameters that control the rate and extent of drug absorption and bioavailability. The water solubility of drugs plays an important role in the absorption of the drug in oral administration. Although oral bioavailability of a drug depends on aqueous solubility, drug permeability, dissolution rate, first-pass metabolism, and susceptibility to efflux mechanisms, aqueous solubility, and drug permeability are also important parameters attributed to oral bioavailability 1. Among the different classes of BCS the peroral delivery of class 3 and 4 drugs is partially or completely decreased due to their poor intestinal permeability.

Due to their inauspicious physicochemical and chemical properties, which are difficult to change, many drug molecules show poor permeability thus, an excipient may be added externally to enhance permeation transiently 2. Rifaximin (RFX) acts on the beta subunit of the DNA (Deoxyribonucleic acid) dependent RNA (Ribonucleic acid) polymerase enzyme of bacteria to inhibit bacterial RNA synthesis 3. It is used to treat diarrhoea caused by E. coli 4.

Rifaximin is an adjusted antibiotic derivative of rifamycin, intended to reach low absorption following oral administration, with gastrointestinal infections as the main therapeutic indication and the gastrointestinal tract (GIT) as the primary target organ. Rifaximin is a BCS class IV, low-solubility, low-permeability compound 5. And the limited permeability is attributable to P-glycoprotein -mediated efflux transport that may play an important role in the intestinal absorption, brain distribution and hepato biliary and / or renal secretion of relevant drugs. Rifaximin has recently been approved for the treatment of IBD. Nanotechnology is now becoming an important area of research due to its wide range of benefits in the pharmaceutical industry and applied sciences 6-7. Nanoparticles are helpful in improving the function of current existing drugs by targeting action, solubility improvement, and dose reduction.8 Nanoparticles can cross the biological barrier successfully due to their smallest particle size by which it can deliver the drugs at the site of action. Oral fast-disintegrating dosage forms (tablet or a capsule) are a relatively novel dosage technology that involves the rapid disintegration or dissolution of the dosage form 9 into a solution or suspension in the mouth without the need for water 10. The dosage form begins to disintegrate immediately after coming into contact with saliva, with complete disintegration normally occurring within 30–50 s after administration 11.

The performance of ODTs greatly depends on the technology used in their manufacture. The tablet’s orally disintegrating property is attributable to the quick ingress of water into the tablet matrix, which depends on the tablet’s porous structure, resulting in rapid disintegration. Hence, the basic approaches to developing ODT include maximizing the porous structure of the tablet matrix, incorporating the appropriate disintegrating agent, and using highly water-soluble excipients in the formulation 12. My expected work is to perform developmental technologies in colon targeted property of the prepared nanoparticles as well as in superdisintegrant technology. These technologies will be compared in drug release characteristics with marketed formulations. Rifaximin nano-particles and Rifaximin tablets are used in the treatment of IBD, which is in the form of polymeric nanoparticles, and increasing the disintegrating technologies offer better reliability in IBD therapeutic approach in the near future.

Fourier Transform Infra-Red (FT-IR) for Compatibility Studies: The drug-polymer interactions were analyzed by FTIR spectro-photometer (Perken-Elmer- spectrum-100 Japan). Two percent w/w of the sample, with respect to potassium bromide, was mixed with dry KBr. The mixture was ground into a fine powder using an agate mortar and then compressed into a KBr disc in a hydraulic press at a pressure of 10000 Psi. Each KBr disc was scanned 16 times at 2mm/size at a resolution of 4cm-1 using Carson apodization. The characteristic peaks were recorded. L- arginine HCI and Polyvinyl pyrrolidine-30 and other excipients were conjugated with RFX.

Melting Point Analysis: The melting point of the drug can be used to determine the compatibility between the drug and excipients and used to evaluate the crystalline state of the drug, especially when converted to nanoparticles.

Preparation of Rifaximin Nano-particles by Anti-Solvent Precipitation Method: Rifaximin nanoparticles were prepared by the precipitation technique in separate entities, which is also called the solvent precipitation method. Drugs were dissolved in methanol (3ml) at room temperature, this was poured into 10 ml of water containing different types of surfactants (alone and in combination) maintained at a temperature of 50 °C and subsequently stirred at an agitation speed of 250 revolutions per minute (rpm) on a magnetic stirrer for 1 h to allow the volatile solvent to evaporate. Addition of organic solvents by means of a syringe drop by drop positioned with the needle directly into surfactant-containing water 14-16.

Zeta Potential (-mv): The potential difference between the surfaces of a solid particle immersed in to the nanoparticles is measured.

Determination of Entrapment Efficiency (Dee): The RFX solution10 ml was subjected to a drug entrapment efficiency test to check the percentage of incorporated RFX.  Previously 20 ml of nano particleswas were prepared and subjected to centrifugation at 5000 RPM for 45 min. The amount of free drug was detected in the supernatant and the amount of loaded drug 17. DEE was calculated by subtracting the amount of free drug in the supernatant from the initial amount of drug taken. The experiment was performed in triplicate. Drug entrapment efficiency (DEE %) could be achieved by the following equation:

The freshly prepared Rifaximin nanoparticles (10 ml) added to the dialysis bag and fitted to the paddle, samples (5ml) were withdrawn at regular intervals of 10 min up to 60 min and replaced with fresh dissolution medium to maintain sink condition. Samples were filtered through ASH less filter paper and assayed spectrophotometrically on UV-Visible spectrophotometer.

These granules are sieved by using sieve no. 22 16. The drug to polymer ratio was varied for various formulations based on formulation design; among 7 formulations, the ratio of polymer varied and was represented as 1:1 ratio in F1, F2, F5, F6 formulations and 1:2 ratio in F3, F4, F7 formulations Table 2.

The dissolution was performed using 900 ml of phosphate buffer solution of pH6.8 as dissolution mediums maintained at 37 ± and 0.5 °C cup to 1 hour for ideal formulation of granules formulae 18.

Accelerated Stability Studies: The purpose of stability testing is to provide evidence on how the quality of a drug product varies with time under the influence of a variety of environmental conditions such as temperature, humidity, and light. The formulation which showed the best In-vitro release was selected for stability studies. The stability studies were conducted by storing the optimized formulation of nanoparticles and granules at 40±2 ºC/75 ± 5% RH in the stability chamber for 45 days. The samples were withdrawn after 45 days and analyzed for various physical tests. 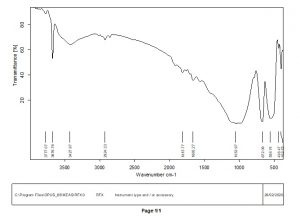 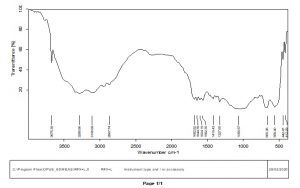 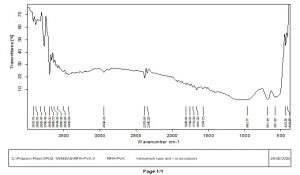 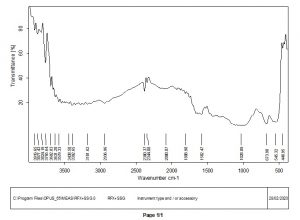 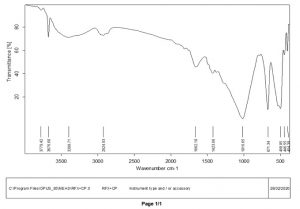 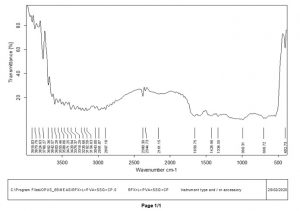 Interpretation of the Rifaximin:

TABLE 3: INTERPRETATION OF THE RIFAXIMIN

The FT-IR spectra of the pure rifaximin, PVPK-30, PVA, and L-Arginine, the drug -polymer mixture was recorded to check the interaction between drug and polymers. The characteristic peak of rifaximin appeared in all the spectra, and values were shifted due to the formation of the complex.

The results showed that the characteristic peak of pure Rifaximin nanoparticle was 3676 cm-1 which is due to O-H stretching of the hydroxyl as a functional group present in the entire spectrum. This indicated that there was no chemical interaction between rifaximin nanoparticle and other excipients. Fig 5.3 to 5.8 shows the results of the compatibility study Table 3. 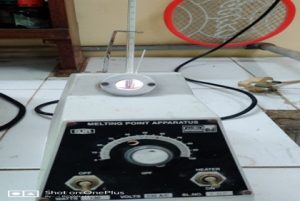 Preparation of Rifaximin Nano Particles by Solvent Precipitation Method: The drug was dissolved in cyclohexanol (3ml) at room temperature; this was poured into 10 ml of water containing different types of surfactants (alone or in combination) maintained at a temperature of 50 °C and subsequently stirred at an agitation speed of 250 revolutions per minute (rpm) on a magnetic stirrer for 1 h to allow the volatile solvent to evaporate. Addition of organic solvents by means of a syringe drop by drop positioned with the needle directly in to the surfactant-containing water. Formulation undergoes 10 formulas (F1-F10).

Determination of Particle Size (Nm) and Polydispersity Index (Pi): Particle size analysis of the prepared Rifaximin nanoparticles was measured by using ABT-9000 nanolaser particle size ranges from 232.6 nm to 995.6 nm.

The polydispersity index (PDI) is a dimensionless measure of broadness of size distribution, a PDI of <0.08 indicates a nearly monodisperse sample, while0.08-0.70 is the midrange value of PDI, a PDI close to 1 (>0.7) indicates a broad distribution of particles. PDI of F8 formulation having 0.965, which is showing the best result.

Determination of Zeta potential: Zeta potential values range from -2.4 to -11.63 provide an indirect measurement of the net charge on the nanoparticle (NP) surface.

Among all formulations, F8 is the best one (-11.63) to characterize the superficial properties of nano-particles in the liquid state; zeta potential measurement is one of the most accessible.

Percentage Cumulative Drug Release of Rifaximin Nano- Particles: The dissolution studies were performed for five formulations (F1-F5) of prepared Rifaximin nanoparticles and compared with each other. From the study, the results show that the formula F5 contains PVPK-30 given the best release in 8 h in comparison with other formula and F5 formula determines the maximum drug release of 89.1%.

The dissolution studies were performed for ten formulations (F6-F10) of prepared Rifaximin nanoparticles in comparison with the formulae. From the study, the results shown that the formula F8 that contains PVPK-30 and Polyvinyl alcohol given the best release in 8 h in comparison with another formula, and F8 formula determines the maximum drug release of 94.4%.

Development Technologies of Rifaximin Granules by using Super Disintegrants: The amount of drug powder was taken andgranules were prepared using microcrystalline cellulose MCC, PVPK 30, Polyethylene glycol PEG 6000, and Sodium Starch Glycolate (SSG) as a diluent, binder, lubricant, and disintegrants at different concentrations and tested to obtain the optimum formula that shows the accepted hardness and the best in-vitro dissolution profile.

Percentage Cumulative Drug Release of Rifaximin Granules using Super Disintegrants: The dissolution studies were performed for the seven formulas of prepared Rifaximin granules from the dissolution study; the results shown that the F5 formulation contains the cross povidone gave the best release in 8 h in comparison with other formulations and the formulation had shown the maximum drug release of 92.1% within 8 h.

Accelerated Stability Studies: The purpose of the stability test is to provide evidence on how the quality of a drug product varies with time under the influence of a variety of environmental conditions such as temperature, humidity, and light. The formulation which showed the best In-vitro release was selected for stability studies and had performed to F8 formulation of Nanoparticles. The accelerated stability studies were conducted as per ICH guidelines for a period of 45 days.

CONCLUSION: The study conclusively demonstrated significant results for Rifaximin nanoparticles and Rifaximin superdisintegrants. The anti-solvent precipitation method can be used as an effective tool for the preparation of Nanosized formulations. Rifaximin nanoparticles prepared by this method showed a significant improvement in aqueous solubility as well as dissolution characteristics which may significantly improve its oral bioavailability. By performing technological development, I am concluding that the nano-particles having high solubility and permeability when compared with the granules made of superdisintegrants.

ACKNOWLEDGEMENT: The authors are thankful to our principal sir for his encouragement throughout the thesis work.

CONFLICTS OF INTEREST: We declare that we have no conflicts of interest.