ABSTRACT: Telmisartan has a strong, nonpeptide antagonist with long-acting angiotensin II type-1 (AT 1) receptor to treat essential hypertension. It is classified as a BCS class II medication, meaning it has poor solubility and high permeability. Because of their capacity to minimise toxicity and change bioavailability, niosomes are becoming increasingly essential in medication delivery. Telmisartan-loaded niosomes were created by adjusting the span 60 and cholesterol ratios in a thin film hydration technique and then assessed for vesicles size, entrapment efficiency and drug release. Batch N6 fulfilled all the requirements and hence it was selected as an optimized formulation of noisome. This investigation supports the use as carriers for developed niosomes to enhance the administration of Telmisartan by oral route.

INTRODUCTION: Niosomes are non-ionic surfactant-based multilamellar or unilamellar vesicles in which an aqueous solution is completely encased by a membrane formed by surfactant macromolecules organised as bilayers. Niosomes are microscopic structures with lamellar features. The niosomes are cholesterol and a non-ionic surfactant of the alkyl or dialkyl polyglycerol ether type that is hydrated into an aq. media. To form a bilayer, the surfactant molecules align themselves such that their hydrophilic ends face each other. Although physically identical to liposomes, they are a better option to liposomes in drug delivery systems due to their increased stability. Niosomes serve as therapeutic reservoirs, allowing drugs to be delivered in a regulated manner for improved bioavailability and therapeutic efficacy over time 1, 2, 3. Niosomes must be allowed to move freely throughout the body while simultaneously protecting the medicine for a certain period, connecting with the intended destination, and conveying active ingredients inside of cells as a carrier. Chemical stability, biodegradability, biocompatibility, low production costs, and low toxicity are why these bilayer structures are chosen over others.

Oral, intramuscular, intravenous, transdermal, and other administration techniques for niosomes have all been investigated. These vesicles also boost the rate of medication absorption across cell membranes 4. The WHO defines hypertension in adults as a systolic pressure of 160 mm Hg (21.3 kPa) or more, and a diastolic pressure (fifth phase) of 95 mm Hg or more (12.7kPa). Hypertension has become a global problem in recent years. There are two types of hypertensions: "primary or essential hypertension," in which the origin of high blood pressure is unknown and "secondary hypertension," caused by renal, endocrine, or vascular disorders. Hypertension is common and a leading cause of stroke and to a lesser extent, ischemic heart disease 5, 6.

Preformulation Study: Investigation of a drug substance's physical and chemical properties alone and when combined with excipients for biopharmaceutical, physicochemical and analytical inquiry to support potential trial formulations by determining the compatibility of first excipients with the active component 7, 8, 9.

The drug's organoleptic properties, such as colour, odour and taste, were observed, and the melting point was determined using the capillary method. Solubility studies were carried out by adding an excessive amount of Telmisartan into separate solvents systems: water, methanol, and chloroform. A Fourier Transform Infrared spectrophotometer was used to record the infrared spectra of pure Telmisartan and a physical mixture (Agilent carry 630). For the compatibility research, the materials were analyzed in the 400-4000 cm-1 range 10. By scanning between 200 and 400 nm on a UV visible spectrophotometer, maximum wavelength of the standard drug solution in phosphate buffer pH 7.5 was determined (Shimadzu UV 1800). The maximum wavelength was calculated using UV spectrophotometric analysis. Made a 100 µg/ml stock solution of medication in methanol and diluted it with pH 7.5 buffer to make 3, 6, 9, 12, 15, and 18 µg/ml drug solutions. On a UV-visible spectrophotometer, the absorbance of these solutions at 296 nm against a 7.5 pH buffer as a blank was measured, and a calibration curve was created 11.

Devising Niosomes: Hydration of thin film was used to make niosomes; 10 mL chloroform was used to dissolve cholesterol and span 60, then Telmisartan was dissolved in a 100 ml RBF.

The organic solvent was then removed under vacuum at 600 °C, on the flask wall, a thin, dry film formed by a rotary evaporator. The film was hydrated with 10 mL of phosphate buffer at pH 7.5. To create vesicles, this is vigorously circulated for 1 h using a rotary evaporator at high-speed RPM. A bath sonicator was used to sonicate hydrated niosomes for 10 min.

TABLE 1: BATCHES MADE FOR NIOSOME FORMULATION

Characterization of Niosomes: Visual observation was used to assess the Niosomes' organoleptic qualities, such as colour, odour, and physical appearance. The entrapment efficiency of the niosomal suspension it can be done by separating the unentrapped drug by centrifugation at 15000 rpm using cooling centrifuge for 45 minuntil a clear supernant was obtained. In 5 mL of pH 7.5 phosphate buffer supernatant was separated and re-dispersed. A UV spectrophotometer set to 296 nm was used to figure out how much medication is encased in the noisome 12, 13.

The size of the vesicles was determined using a computerized inspection system and dynamic light scattering (HORIBA SZ-100 Analyzer). Freshly prepared niosomal vesicle were diluted ten-fold with filtered distilled water and then analyzed at 25°C using ten runs at scan. Optimization time was fixed at 120s. Niosomal suspension was diluted with filtered distilled water & zeta potential was measured in triplicate with the help of (HORIBA SZ-100) zeta seizer. A Cambridge Stereo scan S120SEM: Cambridge, United Kingdom, was used to examine the drug's surface topography at a 10 kV acceleration voltage. DSC was used to examine the thermal characteristics of the pure drug and the optimized batch of niosome (TA Instruments, USA Model: SDT 2960). The DSC temperature and enthalpy scales were calibrated using an indium standard. The purge gas was nitrogen with a 50 ml/min flow rate through DSC cell and 100 milliliter per minute through the cooling unit. In the aluminium pan with a hermetically sealed lid, the sample (1 drop) was heated. Each sample's heat runs were set to a heating rate of 30 to 350°C/min 14.

Drug Release: The drug release investigations were carried out in a 250 ml beaker containing 200 ml of the dissolving media using the dialysis method. A magnetic stirrer was used to stir the medium. The donor and receptor phases were separated using a dialysis membrane as a barrier. He niosomal suspension was placed in a cellulose acetate dialysis bag that was submerged in medium and magnetically agitated. At a temperature of 37 °C ± 0.5 °C, the stirring was done at 200rpm. The pH of the dissolving medium was kept constant for 24 hours in order to simulate GI transit. To keep the sink condition, samples were withdrawn from the receiver at specified periods and replaced with equal volumes of fresh buffer, which was then spectrometrically analyzed for drug content using UV visible spectroscopy 15.

RESULT AND DISCUSSION: From the pre-formulation study, we found that the drug is crystalline white to off-white, odorless powder, Slightly methanol, chloroform soluble, and poor water solubility, having a melting point 270 °C it confirmed that given powder drug is in pure nature and complies with specification as per IP 2014. 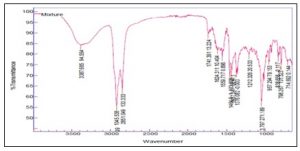 FIG. 2: FTIR SPECTRA OF MIXTURE OF DRUG AND EXCIPIENTS

Infrared spectra of pure telmisartan and physical mixture were recorded, by this it is clear that the drug remained its normal value even in physical mixture along with polymer and other excipients.

The Telmisartan calibration curve in a respective buffer in the range of 3 to 18 µg/ml was discovered to be linear with a coefficient of 0.999 at λmax 296 nm. 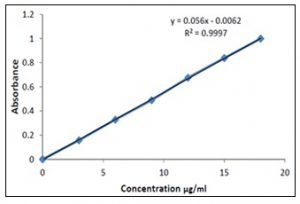 The melting point of telmisartan is 271.370°C (T peak = 271.370°C). On the other hand, a single peak suggests that the medicine sample is clear of contaminants. It complies with the IP 2014 specification. 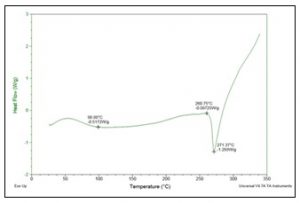 Characterization of Niosomes: The physical properties of niosome formulation were found that it is a white color suspension with a specific odor.

Entrapment Efficiency: Table 5 shows the entrapment efficiency of the prepared niosomes, which ranges from 25.65% to 80.33%.

TABLE 5: ENTRAPMENT EFFICIENCY OF ALL BATCHES OF PREPARED NIOSOME

*Each value mean of 3determinations. 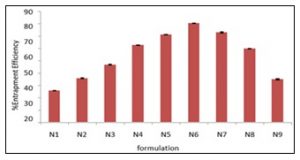 FIG. 5: PERCENTAGE OF ENTRAPPED DRUG IN ALL BATCHES OF PREPARED NIOSOMES

Particle Size of Vesicle: Particle size distribution is commonly measured in a variety of sectors, and it is often an important characteristic in the production of numerous products.

Zeta Potential: Determination of average zeta potential of niosome preparation was carried out by using HORIBA SZ- 100 zeta sizer Ver. 2.20 the result shown in Fig. 7. The prepared optimal batch of niosomal suspension has a zeta potential of -22.2 mV.

Differential Scanning Colorimeter Analysis: The thermogram of the drug-loaded niosome revealed no such distinctive peak, indicating that the drug was equally diffused in the niosome at the molecular level. The lack of a strong peak implies that the drug's crystallinity has decreased, and it has become amorphous. As a result, the drug's solubility improves.

Drug Released Etermination: In-vitro drug release is carried out using a dialysis technique on the sort-out batches (N1-N9). According to the findings, the release of telmisartan niosomes was delayed for 24 h. Table 6 shows the percentage of medication released after 24 h.

FIG. 11: % DRUG RELEASE STUDY OF ALL BATCHES OF NIOSOME PREPARATION

Stability Study: According to ICH guidelines, a three-month stability assessment of the improved niosomal solution was conducted at room temperature. Table 7 shows the percentage drug release and entrapment efficiency of optimized batch N6 after its stability.

There were no significant changes in the final formulation to confirm its stability. After stabilization, the preparation preserved its original white colour and specific odour, with no sedimentation or creaming. These findings revealed that prepared niosomes were stable enough.

CONCLUSION: Telmisartan-loaded niosomes enhances the bioavailability of the drug. The present study is useful for the potential of developing niosomes as carriers for enhanced Telmisartan oral delivery. Niosome size, entrapment efficiency, DSC, zeta potential, and in-vitro drug release were used to make the decision. Because Formulation N6 met all these criteria, it was chosen as the best niosome formulation.

The formulation was optimised for entrapment efficiency, which was discovered to be 80.33%. The average particle size of the preparation was 85.6 nm, and the Zeta potential was -22.2 mV. Telmisartan had a cumulative percentage drug release of 91.8 % in 24 h. According to the study, the Niosome formulation is stable, with no notable changes in entrapment efficiency or drug release. Niosomal drug delivery system will be endowed with the ability to improve patient compliance, deliver optimal medication delivery to the target site and limit unwanted effects.

ACKNOWLEDGEMENT: The authors are grateful to Ashokrao Mane College of Pharmacy in Pethvadgaon, Kolhapur, Maharashtra, India, for allowing them to conduct the research.

CONFLICTS OF INTEREST: There are no conflicts of interest declared by the authors.