ABSTRACT: The global production of solid waste and lack of its management is a concern for many global populations. Also of major concern is the production of fossil fuel-based materials and substances such as medicines. Another unease observation is the destructive action of garden snails on plant materials, of which many are found in gardens and fields of farmers. The search, however, continues for procedures that could contribute to the production of bio-based products such as bio-medicines as well as actions to limit the production of solid waste, which is a major contributor to environmental pollution. Glucose a fermentable sugar, has been identified as an important feedstock for the synthesis of many bio-products. Cellulose a glucose-based biopolymer, and structural components of paper material can be degraded into glucose by cellulase a hydrolytic enzyme system. The cellulolytic action of garden snails has been used to saccharify various waste papers at different incubation temperatures, and the optimum sugar formation from these materials and % saccharification of each paper material was determined. Optimum degradation of office paper, newspaper, filter paper, Pick ’n Pay paper, filter paper, Woolworth's paper, and brown envelope paper was recorded at temperatures of 30 ⁰C, and 40 ⁰C whilst the extent of degradation differs with brown envelope paper exhibiting the highest degree of degradation producing a sugar concentration of 9.67 mg.ml-1 at an incubation temperature of 30 ⁰C and 18% saccharification. The lowest degree of saccharification at optimum incubation temperature was at 30 ⁰C when newspaper produced a sugar concentration of 1.71 mg.ml-1 and 7.6% saccharification, respectively.

Waste paper, such as newspaper, is one of the largest components of municipal solid waste, and the production of bioethanol from organic waste materials such as waste newspaper has been carried out by Byadgi and Kalburgi, which is a process of utilizing solid waste to benefit the environment 2. Presently biofibers are attracting increasing interest because of their use in the biomedical sciences, and these substances reduce the use of petroleum-based synthetic polymers because they are safe, have a low production cost, and are biodegradable 3.

Cellulose is a major structural component of waste paper, and the hydrolysis of this bio-polymer is a crucial step in the development of bio-substances from waste paper. A challenge is a time taken for hydrolysis and the necessity of large quantities of costly commercially available cellulase enzymes 4. There is thus a need for affordable enzymes from naturally available sources, and the synergetic nature of protozoa and bacteria is a good example to illustrate and explain cellulose digestion in invertebrates and herbivores cattle. Cleveland first published in 1924 his work with termites, which established the possibility of Reticulitermes flavipes functional elimination of protozoa from the hindgut, thus concluding that a hindgut protozoan fauna was responsible for the cellulose digestion 5. Numerous cultures of bacteria from the termites’ gut have been isolated and classified based on their similarities, dissimilarities, and biochemical tests by Upadhyaya et al. l6.

The African giant land snail (Archachatina marginata) has also been discovered to be a good source of digestive enzymes, and activities of digestive enzymes in the gut regions of the African giant land snail has been investigated by Ademolu et al., where protease, lipase, α-glucosidase, amylase and cellulase were detected in all the gut regions of the alimentary canal of African giant land snail when it was active and when it was aestivated 6, 7. The cellulose catalyzed enzymatic hydrolysis of lignocellulosic biomass for production of fermentable sugars has already been investigated by numerous researchers to be the most important step for the production of biofuels and other bio-based products 8, 9, 10, 11. Investigations to improve the efficiency of the cellulase enzymes in hydrolyzing cellulose with the production of glucose is a continuous process 11. Various factors that have an influence on the performance of the cellulose enzyme are the crystallinity of cellulose biomass, environmental pH, and temperature to which the cellulose is exposed during the hydrolytic process. Kumar and Wyman previously studied the access of cellulase to cellulose and lignin for poplar solids produced from cellulose by leading pre-treatment technologies at 4 ⁰C 12. Zheng et al., investigated the temperature sensitivity of cellulase adsorption on lignin and its impact on enzymatic hydrolysis of lignocellulosic biomass where adsorption behaviors were examined at both 4 ⁰C and 50 ⁰C, with the latter preferred for the enzymatic hydrolysis of cellulose. It was reported that an increase in temperature usually improves the adsorption kinetics of cellulase on lignocellulosic materials as it increases the diffusion coefficient of the protein in solution to reach the adsorption surface 13.

The purification of cellulase from garden snails and the relative activity on different waste paper materials has recently been published 14, 15. With this research, the activity of the cellulase enzyme from a brown garden snail on different waste paper materials was investigated under controlled conditions at temperatures ranging from 24 ⁰C to 60 ⁰C, and the aim was to conclude the sugar production, as well as the saccharification, extend of these paper materials.  Information obtained from these temperature profiles would be an important variable to consider when performing large-scale bio-conversion of waste paper materials into glucose that could be utilized as feedstock for the bio-synthesis of substances such as bio-medicines.

Preparation of Solutions: A mass of 0.6 g of tris (hydroxymethyl) aminomethane (Merck, Darmstadt, Germany) was dissolved in 1.0 dm3 distilled water to prepare a 0.005 M buffer solution with pH 5.0 adjusted by using hydrochloric acid (30%) and 0.5 M potassium hydroxide solutions. The Tris-HCl buffer solution was used during the purification of the enzyme as well as during waste paper saccharification with the cellulase enzyme. A dinitrosalicylic acid (DNS) solution was prepared by dissolving 10.0 g DNS, 2.0 g phenol, 0.5 g sodium sulphite, 200.0 g potassium sodium tartrate, and 10.0 g sodium hydroxide in 1.0 dm3 of distilled water. The DNS solution (60.0 ml) was finally diluted by mixing it with 140.0 ml of distilled water and used to determine the amount of sugar produced during saccharification of waste paper with cellulase from garden snails from a calibration curve constructed with glucose solutions with different concentrations. Isolation and purification of the enzyme from garden snails: Garden snails were collected from a garden in Pretoria, South Africa, during a rainy season and drowned in water for a period of 24 h. Based on the validated method by Ndlovu and Van Wyk, shells of snails were removed with the foot cut off from each snail. The visceral sections were weighed and cut into small pieces and transferred into a glass beaker filled with 15.0 ml of 1.0% methanol-tris-HCl buffer. The mixture was homogenized using a hand blender, and the homogenate was then stirred for 1 hour, transferred into a test tube, and centrifuged for 30 min at 4000 rpm using a Beckman, GP Centrifuge (UK, Marca). The supernatant was collected as crude cellulase enzyme and transferred into a dialysis tube (Sigma, St Louis, Switzerland) that was soaked in distilled water at 4 ⁰C for a period of 4 h. The enzyme solution in the dialysis tube was immersed in distilled water (stirring) for a period of 18 h where after the protein content was determined by the Buiret reagent method 15, 16.

Saccharification of Waste Paper Materials: Filter paper, office paper, foolscap paper, newspaper, Pick ŉ Pay advertising paper, Woolworths advertising paper, and brown envelope (kraft) paper were prepared as round discs with a diameter of 6 mm each. Twenty pieces of each paper material were transferred into test tubes where after 800 µl of Tris-HCl buffer and 200 µl of dialyzed snail enzyme (cellulase) were added. The mass of paper materials was determined and used to calculate the percentage saccharification of each paper material. These test tubes were incubated for 2 h at 24 ⁰C, cooled down to room temperature where after 1500 µl of diluted DNS solution was added and the test tubes then placed in a boiling water bath for 10 min. All tubes were cooled in ice water, and the determination of reducing sugars released as a result of the cellulase action performed according to the DNS assay method using a Shimadzu, UV 1800 spectrophotometer at 520 nm 17. The same waste paper–cellulose saccharification procedure was performed at 30 ⁰C, 40 ⁰C, 50 ⁰C, and 60 ⁰C, and all incubations were performed in triplicate.

RESULTS AND DISCUSSION: The utilization of renewable feedstocks to synthesize various chemical-related commodities such as bio-pharmaceuticals and bio-chemicals would become more topical as the impact of climate change as a result of fossil fuel combustion is realized. Also, a major concern is the cost of many catalysts needed during bio-synthetic procedures, and the accumulation of solid waste in many cities around the globe is also problematic. The cellulose component of organic solid waste could be developed as a suitable renewable feedstock for many bio-synthetic procedures due to the synthetics potential of glucose (a building block of cellulose) as fermentable sugar. Many populations such as farmers and dedicated gardeners consider garden snails as a pest due to their destructive action on plants which act as a source of energy for these snails. The isolated cellulase enzyme that is a major degrading system in snails can thus be used effectively to saccharify the cellulose content of waste paper producing glucose that could assist the process of developing bio-feed stocks for pharmaceutical and chemical procedures. An important incubation variable to optimize saccharification of waste cellulose is to determine the temperature at which optimum sugar production from each waste paper material could take place when bio-converted by cellulase isolated from garden snails. Fig. 1 reflects garden snails used for the extraction of cellulase activity that was used for the bio-degradation of various paper materials into glucose, a fermentable sugar.

During saccharification of filter paper with garden snail cellulase Fig. 2, optimum degradation was obtained at 30 ⁰C and 40 ⁰C resulting in a sugar concentration of 1.72 mg.ml-1 and 1.79 mg.ml-1, respectively. The percentage saccharification at these temperatures was calculated at 5.5% for 30 ⁰C and 5.7% obtained at 40 ⁰C. The lowest extent of sugar production obtained at an incubation temperature of 24 ⁰C was 0.50 mg.ml-1 that was 71% less than the highest concentration produced at 30 ⁰C and 72% less than the highest concentration produced at 40 ⁰C. Optimum sugar production of 5.67 mg.ml-1 was produced during the degradation of office paper Fig. 3 at a temperature of 30 ⁰C that was 78% higher than the amount of sugar released from this paper material when exposed to the cellulase enzyme system at 24 ⁰C. 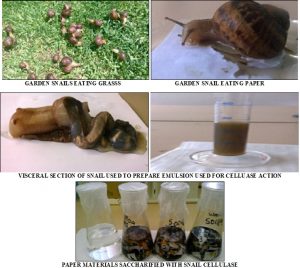 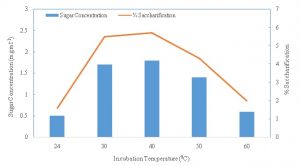 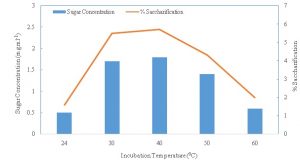 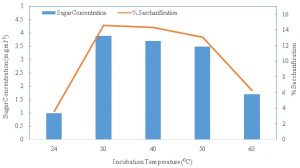 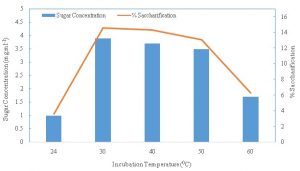 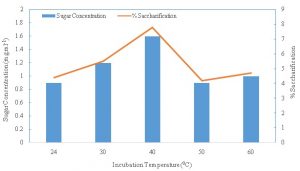 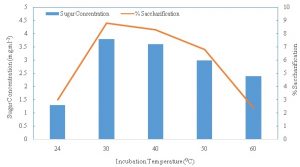 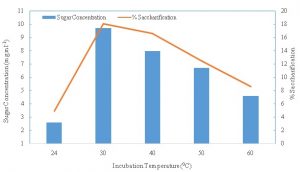 CONCLUSION: Cellulose obtained from waste paper is a resource for bio-product development, and in addition, the utilization of cellulase from garden snails to saccharify waste cellulose could address many issues such as environmental pollution, renewable feedstock development, and the utilization of less expensive biocatalysts. By optimizing these variables could not only limit environmental pollution but could also assist farmers by protecting their crops against the destructive action of garden snails and provide glucose that could be utilized as feedstock for the synthesis of renewable substances such as bio-medicines. The relatively low incubation temperature when bio-converting waste paper cellulose into fermentable sugars by using cellulase from garden snails has another positive effect on the environment as less generated energy is needed during the incubation procedures when cellulose is saccharified.

ACKNOWLEDGEMENT: Appreciation to the department of Pharmacology and Therapeutics, Sefako Makgatho Health Sciences University, for allowing the research to be conducted in the departmental laboratories.