ABSTRACT: A series of discrete mononuclear lanthanide(III) complexes of H2L1 [Ln(H2L1)(NO3)2]NO3.nH2O (Ln = La, Ce, Pr, Nd, Sm, Eu, Gd, Tb,  Y; n = 1 for Ce; n = 2 for La, Sm, Gd and Y; n = 3 for  Pr, Nd, Eu, and Tb) have been prepared by the condensation of  Schiff-bases with the precursor compounds namely, 2,6-diformyl-4-methylphenol, 1,5-diamino-3-azamethypentane and  4,5-dimethyl-1,2-phenylenediamine. All the mononuclear complexes have been prepared in situ by the step-wise condensation from the precursor compounds.  The phenolate oxygen atom of the nucleating ligand behaves as a bridging group between the metal.  The complexes have been characterized by elemental analysis, IR, UV-Visible, ESI mass spectra and magnetic studies. The yield of these complexes increases from lighter lanthanides to heavier lanthanides. The fluorescence studies were carried out for europium and terbium complexes. The results of elemental analysis of the complexes are in good agreement with the theoretical values.  The complexes are soluble in methanol, chloroform, DMF, DMSO, and CH3CN.  Conductivity studies reveal that all the complexes are 1:1 electrolytes.

INTRODUCTION: Macrocyclic compounds have attracted an increasing interest owing to their role in the understanding of the molecular processes that occur in different scientific fields, ranging from chemistry to biochemistry and medicines, from material science to hydrometallurgy 1-8, 25. Based on the bonding strength of the ligating groups and the cavity of the ring, macrocyclic ligands can combine with metal ions optionally.  Thus this kind of compound offers a direct and similar way to mimic the biological systems, in which biological cycles containing active metal centers are largely involved.

In 1970 Robson and co-workers reported the synthesis of a new compartment macrocyclic system based upon the metal template Schiff-base condensation of 2,6-diformyl-4-methyl phenol with 1,3-diaminopropane in the presence of a range of first row transition metal ions 9. 2,6-Diformyl-4-methylphenol is a potential precursor to synthesize the compartmental Schiff-basemacrocyclic ligands containing two bridging phenol groups.

Compartmental macrocycles are relevant because they can accommodate two or more metal ions, connected in close proximity by appropriate bridging groups which, if paramagnetic, can interact with each other through the bridging donor atoms of the ligands in a ferromagnetic or antiferromagnetic way.  By changing the type of ligand, the distance between the two chambers and/or the paramagnetic centers, it is possible to tune the magnetic interactions. Thus, the complexes, in which ferromagnetic interactions occur, may be good building blocks for the preparation of molecular magnets. In addition to that, asymmetric compartmental ligands have been under intense scrutiny because it is expected that well defined bimetallic systems may find interesting applications in several areas of chemical research 10-13. On the other hand, unsymmetrical macrocycles with two dissimilar lateral chains have been less used 14-19. This type of unsymmetrical macrocycle was first reported by Okawa and Kida14.

There has been particular interest in the preparation and characterization of coordination compounds with aza-macrocyclic ligands with pendant substituents for the reasons given above 20-24. The complexation of polyaza-macrocyclesare governed mainly by the macrocyclic ring size. N-functionalization of these macrocycles may enhance their metal-ion selectivity and the stability of metal complexes depending on coordination properties of the pendant arms 20. Pendant-armed macrocycles and their metal complexes have attracted much interest in the past years 25-30. Synthesis and characterization of Yb-Na dinuclear complex which represents the first example of macrocyclic compartmental complex containing a lanthanide and alkali metal ions with similar pendant arm have been reported by Casellato et al31. One potential of this area is the concept that, by having pendant arms attached at appropriate positions on the macrocyclic framework, an ‘opened crypt and’ would result, leading to modified complexation properties over the corresponding clathrochelates or simple macrocyclic precursors 26.

The ESI capillary was set at 3.5 kV and the cone voltage was 40 V.  The spectra were collected in 6 s scans and the print outs are averaged spectra of 6 - 8 scans. Magnetic susceptibility measurements were carried out on an EG & G PAR MODEL 155 vibrating sample magnetometer at 25 oC.  The instrument was calibrated using pure nickel.  1H NMR spectra were recorded on JEOL 400 MHz 1H NMR spectrometer in CDCl3.  Fluorescence study of the complexes were carried out on a Hitachi 650-40 Fluorescence Spectrophotometer in acetonitrile or N,N-dimethylformamide.

The step-wise condensation of 2,6-diformyl-4-methylphenol (two equivalents) with 1,5-diamino-3-azamethylpentane (one equivalent) and 4,5-dimethyl-1,2-phenylenediamine (one equivalent) in the presence of hydrated lanthanide(III) nitrate (one equivalent) in methanol under refluxing condition complexes of H2L1 are formed in 30 - 45 % yield.  Discrete mononuclear complexes [Ln(H2L1) (NO3)2]NO3.nH2O (Ln(III) = La, Ce, Pr, Nd, Sm, Eu, Gd, Tb, and Y; n = 1 for Ce; n = 2 for La, Sm, Gd, and Y ; n = 3 for Pr, Nd, Eu, and Tb) are isolated in the solid state (Scheme 1).  The yield of these complexes increases from lighter lanthanides to heavier lanthanides.  The complexes are soluble in methanol, chloroform, DMF, DMSO, and CH3CN. 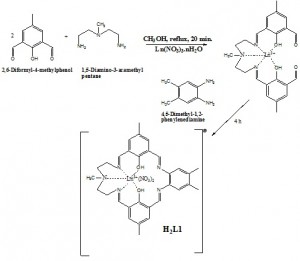 The infrared spectra of the complexes of H2L1 contain no absorption band characteristic of -NH2 or >C=O functions.  The strong absorption band observed at ca. 1635 cm-1 is attributed n(C=N) vibration 35. The absorption band appearing at 1545 cm-1 is attributed to n(C=C).  The n(OH) vibration of phenolic proton appears as a broad band at ca. 3400 cm-1 probably due to the symmetric and antisymmetric OH stretching vibration of lattice water 36. The bands at ca. 1380 and 820 cm-1 are attributed to ionic nitrate groups.  The two intense nitrate absorptions due to the asymmetric stretching vibration of n(NO) appearing at ca. 1450 cm-1 (n5) and 1300 cm-1 (n1) are characteristic of the coordinated chelating nitrate ion 37.

The absorption band appearing at ca.1037 cm-1 is attributed to ns(NO2).  The frequency separation between then1 and n5 vibration is found to be ca.180 cm-1 which is indicative of bidentate coordination of the nitrate ion 38. The complexes exhibit a sharp and strong absorption band at 1383 cm-1 due to the n(NO) vibration of the free nitrate37. The infrared spectral data of the complexes are presented inTable1.

Complexes Eu(III) and Tb(III) exhibit three absorptions at 217, 255, and 400 nm and all other complexes (Ln = La, Ce, Pr, Nd, Sm, Gd, and Y) exhibit two absorptions, one around 214 nm and the other in the 390-400 nm region40. These absorptions are due to characteristic of the π-π* transition of the azomethine linkage 41, 42.  There is no apparent loss of the metal ion is solution indicating the kinetic inertia of these complexes to metal ion release. The electronic absorption spectral data is presented in Table 3. 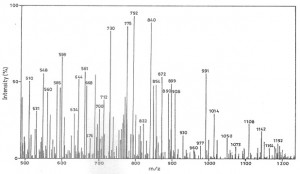 CONCLUSIONS: The step-wise metal template condensation of 2,6-diformyl-4-methylphenol, 1,5-diamino-3-azamethylpentane with 4,5-dimethyl-1,2-phenylenediamine in the presence of hydrated lanthanide(III) nitrate readily forms complexes of H2L1. The yield of the complexes does not vary appreciably along the series.  However, the yield of the Sm, Nd, and Y complexes of H2L1 vary from 35 - 40 %.  The metal ion is coordinated to the three nitrogen and two-oxygendonor of the macrocycle and to four oxygen atoms of the two bidentate chelating nitrate atoms. The Schiff bases behave as neutral or dianionic ligand according to the reaction condition. The presence of a base (LiOH or NaOH) promotes the formation of complexes containing only one nitrate group and dianionic Schiff base and in the absence of a base the macrocycle coordinates on the neutral ligand. The complexes are soluble in common organic solvents and aromatic hydrocarbons. Similar type of macrocyclic complexes where the phenolic protons remain intact have been reported 45-47. The formation of the complexes of H2L1 with all lanthanide(III) ions is due to the adaptability of this macrocycle to coordinated according to the electronic and geometrical demands of the metal ions.