ABSTRACT: A novel series of transition metal complexes of [M(C19H18N2O2S)X2], where M = Ni(II), Cu(II), X = Cl-, NO3-, ½ SO42- and (C19H18N2O2S) moiety corresponds to the tetradentate aza-oxo macrocyclic species, were synthesized by template condensation reaction of 1,4-bis(2-formylphenoxy)butane and thiourea in the presence of divalent metal salts in 1:1:1 ratio. The metal complexes were characterized and analyzed by elemental analyses, molar conductance, magnetic measurements, and spectral techniques like IR, mass, UV-VIS, electron paramagnetic resonance spectroscopy, and thermal studies. The low values of the molar conductance values indicate the non-electrolytic nature of synthesized complexes except nitrato complex of Ni (II) which is 1:2 electrolytic in nature. Based on aforesaid spectral studies, [Cu(C19H18N2O2S)(SO4)] complex may possess trigonal bipyramidal geometry, [Ni(C19H18N2O2S)](NO3)2 complex tetrahedral geometry and rest of the complexes six coordinated octahedral/tetragonal geometry. To explore the complexes in the biological field, synthesized transition metal complexes were examined against the pathogens A. niger, S. rolfsii, F. oxysporum, and A. brassicae. All metal complexes displayed good antifungal activity.

INTRODUCTION: Synthetic macrocyclic are a growing class of compounds with varying chemistry with a wide range of different molecular topologies and sets of donor atoms 1. The chemistry of macrocyclic complexes has received much attention in recent years 2.

Macrocyclic metal complexes were studied extensively because of their attractive chemical and physical properties and their wide range of applications in numerous scientific areas 3, 4, 5, 6.

In the biological field, transition metal macrocyclic complexes have received great attention because of their antitumor, antibacterial, antiviral, antifungal and anticarcinogenic activities 7, 8, 9. Such biological activities are due to their ability to form a tetradentate chelate with essential heavy metal ions, bonding through nitrogen, sulfur, and oxygen 10. The complexes of metal ions in combination to macrocyclic ligands are significant, as these resemble with natural systems like porphyrin and cobalamine 11, 12. We made our efforts to design and develop aza-oxo containing (N2O2-donor) macrocyclic metal complexes of 3d transition metal series. The present report deals with the synthesis, spectral studies, thermal study, and biological evaluation of Ni(II), and Cu(II) complexes, which were derived from 1,4-bis(2-formylphenoxy)butane and thiourea.

MATERIALS AND METHODS: All used chemicals were commercial products and used as supplied. Salicylaldehyde, 1, 4-dibromobutane and thiourea were of AR grade and procured from Sigma Aldrich, Bangalore, India. Metal salts were purchased from E. Merck, India and were used as received. All used solvents were of spectroscopic grade. 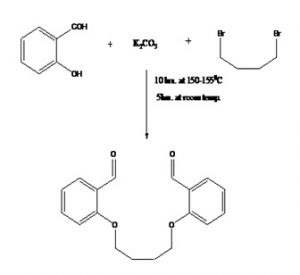 Synthesis of Macrocyclic Metal Complexes: All the complexes were synthesized by the template method, i.e., by condensation of 1, 4-bis (2-formylphenoxy) butane and thiourea in the presence of divalent metal salts in 1:1:1 ratio. In the hot methanolic solution of 1, 4-bis (2-formylphenoxy) butane (1.0 mmol) methanolic solution of the divalent metal salt of Ni(II), and Cu(II) (1 mmol) was added. The resulting solution was refluxed for 5 h, after which thiourea (1.0 mmol) was added to the above solution and then refluxed continue for 8-12 h. On overnight cooling, a coloured precipitate was formed which was filtered, washed with methanol, and dried in vacuum. The obtained yield was ≈ 55-65%.

The template condensation of 1,4-bis(2-formylphenoxy)butane and thiourea in the presence of bivalent metal salts, in the molar ratio 1:1:1 is represented in Fig. 2. 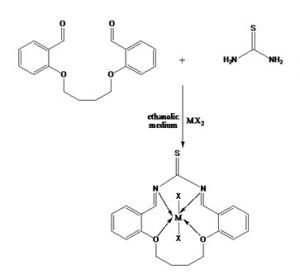 Antifungal Activity: The Poison food Technique13 was applied to examine fungicidal investigations of synthesized metal complexes against A. niger, S. rolfsii, F. oxysporum, and A. brassicae. DMSO and Captan were employed as control and standard fungicide, respectively. The inhibition of growth of fungi was expressed in percentage and determined by using the following relation, which is given below:

RESULTS AND DISCUSSION: Based on elemental analysis data Table 1, all the complexes have the general composition [M (C19H18N2O2S) X2], where M = Ni(II), and Cu(II) The complexes were obtained in powder form. These were found to be soluble in DMF and DMSO for spectral measurements.

IR Spectra: In IR spectrum of metal complexes bands in the region 2850-2880 cm-1, 1590-1630 cm-1, and 750-780 cm-1, corresponding to the presence of the aromatic stretching, azomethine group (C=N), stretching vibration of C=S group. This binding of donor atoms to a metal ion is also supported by the appearance of new IR bands at 438-480 and 590-610 cm-1 due to ʋ (M-N) and ʋ(M-O) vibrations, respectively 14, 15, 16. This discussion reveals that the nitrogen atom of the azomethine group and an oxygen atom (present in the macrocyclic ring) coordinates to metal ions as tetradentate chelate to form complexes. However, a strong absorption band in the range of 750-780 cm-1 remain as such in IR spectra of all metal complexes, indicates that C=S don’t coordinate to the metal ion.

It is suggesting that both nitrate groups are coordinated to the central metal ion in a unidentate manner. The spectrum of sulfate complex of Cu(II) shows that band ʋ3 split at 1121 cm-1 and 1054 cm-1, corresponds to unidentate behaviour of sulfate ion17 Fig. 3(b). 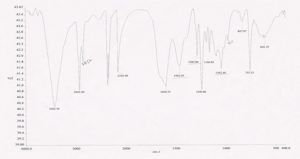 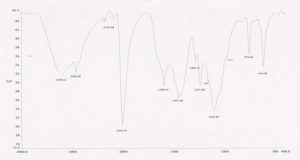 Ligand Field Parameters: Various ligand field parameters, i.e. Dq, B, and β for the complexes were calculated 20. The value of Dq, and B were calculated by using first and third transitions. The calculated parameters were given in Table 2. The nephelauxetic parameter β was obtained by using the relation: β = B(complex)/B(free-ion), where B was the Racah inter-electronic repulsion parameter, and the value of B (free ion) for Ni(II) is 1041 cm-1. The values of β are 0.93 and 0.66. These values indicate the covalent character in metal-ligand ‘σ’ bond.

Electron Spin Resonance (ESR): ESR studies of copper(II) complexes were carried out on the X-band at 9.1 GHz under the magnetic field strength 3000 G. Polycrystalline samples in DMSO were used to record X-band EPR spectra of the Cu(II) complexes. The trend g|| > g┴ > 2.0024 indicate that unpaired electron is localized in the dx2-y2 orbital of the Cu (II) ion and the spectral features are characteristic of tetragonal geometry Table 3.

The parameter G, determined as G = (g|| -2)/ (g┴-2), which measures the exchange interaction between the metal centers in a polycrystalline solid, has been calculated. The Cu (II) complexes show “G” values, which are greater than 4, indicating the exchange interaction is absent in solid complexes21, 22. The IR spectrum of [Cu (C19H18N2O2S) (SO4)] complex suggested five coordinated geometry. Two basic structures were possible for five coordinated geometry, i.e. trigonal bipyramidal or square pyramidal, which was characterized by the ground states dX2-Y2 or dZ2, respectively. EPR spectrum of this complex provides an excellent basis for distinguishing between these two ground states. For this system, parameter R is calculated [R = (g2-g1)/ (g3-g2)]. If the value of ‘R’ is greater than 1 (1<R), the ground state is predominantly to dZ2. On the other hand, the value of ‘R’ is less than 1 (1>R), the ground state is predominantly to dX2-Y2. EPR spectrum of the [Cu (C19H18N2O2S) (SO4)] complex shows three g values. The values of g1, g2, g3, and R are 2.27, 2.15, 2.10, and 2.4, respectively. As the value of ‘R’ is more than one, the ground state is predominantly dZ2 and this is suggested that complex has trigonal bipyramidal geometry 23 Fig. 5. 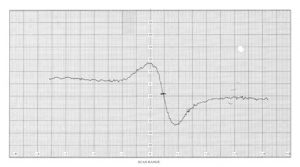 Thermal Analysis: The thermal stability of macrocyclic complexes was investigated using thermogravimetric analyses (TGA). TGA was carried out at a heating rate of 10 ºC/min in a nitrogen atmosphere over a temperature range of 30-800 ºC. The thermogram of the complexes of Cu (II) and Ni (II) does not show any peak below 150 ºC, which indicates that there was no water molecule inside or outside the coordination sphere. On heating Ni (II) and Cu (II) complexes decompose in three steps. First step was due to the decomposition of coordinated anion at temperature 220 ºC. Second and third step indicate decomposition of organic moieties Fig. 6 (a-c). 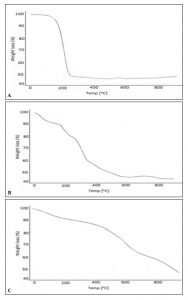 On chelation, the polarity of the metal ion will be reduced to a greater extent due to the overlap of the ligand orbital and partial sharing of the positive charge of the metal ion with donor groups. Further, it increases the delocalization of the π electrons over the whole chelate ring and enhances the lipophilicity of the complex. This increased lipophilicity enhances the penetration of the complexes into the lipid membrane and thus blocks the metal binding sites on enzymes of microorganisms. These metal complexes also disturb the respiration process of the cell and thus block the synthesis of proteins, which restricts further growth of the organism 26. For antifungal activity, macrocyclic complexes were screened in-vitro against A. niger, S. rolfsii, F. oxysporum, and A. brassicae. The complexes were tested at the concentration 1000, 750, 500, and 250 ppm in DMSO Table 4. Result reveals that the [Cu (C19H18N2O2S) (SO4)] complex shows good activity against S. rolfsii, and A. niger. Order of antifungal activity of complexes was found in the following order:

TABLE 4: ANTIFUNGAL ACTIVITY RESULT OF THE SCHIFF’S BASE LIGAND AND ITS METAL COMPLEXES

CONCLUSION: The macrocyclic transition metal complexes of Ni (II) and Cu (II) have been synthesized and characterized by using various spectroscopic studied. Ni (II) complexes were found to have octahedral/tetrahedral, whereas the Cu (II) complexes were of tetragonal/trigonal bipyramidal geometry. The macrocyclic moiety coordinates to metal ions in tetradentate fashion (N2O2) to give the stable aza-oxo complexes. Analytical data correspond to the monomeric composition of the complexes. The antifungal examination led to the conclusion that the metal complexes inhibit the growth capacity of tested fungus strains.

ACKNOWLEDGEMENT: Authors are thankful to the Sophisticated Analytical Instrument Facility of IIT Bombay for recording EPR spectra and USIC, University of Delhi, for recording IR, Mass, and TGA. We are also thankful to IARI Pusa, New Delhi, for providing the laboratory facilities for biological study.