ABSTRACT: Terminalia paniculata Roth. (TP) is a tropical tree. Traditionally, flower juice and bark of Terminalia paniculata have been used as a remedy for cholera, for the treatment of diabetes, inflamed parotid glands and in menstrual disorders. The objective of the present study is to evaluate the antidiabetic potential of Terminalia paniculata bark extract in various in-vitro models and its safety evaluation using Wistar albino rats. The in-vitro antidiabetic activity was studied using Alpha amylase, Alpha glucosidase inhibition and Glucose diffusion assay. The nitric oxide radicals scavenging activity was determined using antioxidant assay. Acute and sub acute toxicity studies were designed as per the OECD guidelines- 423. TP extract shows maximum inhibition of 94.5 % on α-Amylase at 700 µg/ml and 94 % on α-Glucosidase at 1000 µg/ml. In glucose diffusion, it showed highest activity at a concentration of 1500 µg/ml. Also, it had excellent nitric oxide scavenging activity and maximum percentage inhibition of 86.12±1.01 was observed at 1500 µg/ml. Acute toxicity study supported the tolerance level even at the dose of 5000 mg/kg body weight and no toxic signs and mortality were observed. The sub acute toxicity studies did not show any significant changes in the body weight and haematological parameters in the TP extract treated groups up to the daily oral dose of 2000 mg/kg body weight. Our findings point out the promising effect of Terminalia paniculata Roth. bark as a valuable antidiabetic representative in diabetic complications

Despite the impressive technical advances made in the diagnosis and therapy of diabetes, many individuals still use alternative forms of therapy because of several factors such as side effects of modern drugs, the effectiveness of plant remedies and high cost of synthetic drugs. In recent years, there has been a resurgence of interest in medicinal plants with hypoglycemic potential 2. Therefore, evaluation of the plants with antidiabetic and other activities, which prevents both microvascular and macrovascular complications of diabetes are necessary 3 to provide scientific proof and justify their use in ethnomedicine. Terminalia paniculata Roth. (TP), which belongs to Combretaceae family, is a tropical tree with a large natural distribution in Western Ghats, India. Traditionally, flower juice and bark of Terminalia paniculata have been used as a remedy for cholera, diabetes, inflamed parotid glands and menstrual disorders. However, till date, there has been no investigation for supporting the antidiabetic properties of this plant. Hence, this study has been taken with an aim to evaluate the antidiabetic potential of Terminalia paniculata bark extract in various in-vitro models.

The dried bark of Terminalia paniculata Roth. was arranged from Sengottai, Tenkasi Taluk, Tamil Nadu, India by a local professional. The plant material was authenticated by Prof. V.Chelladurai, Research Officer (Retd), Govt. Siddha College, Tirunelveli. A voucher specimen (CLRICSIR/2011/06) has been preserved at our laboratory for future reference.

Bark portions were cut into pieces; shade dried at room temperature and was subjected to size reduction into coarse powder by using dry grinder. The powdered sample (986 g) was extracted with ethanol by hot maceration process yield (5.1095 %). Ethanol was completely removed from the extract under reduced pressure, then lyophilized and stored in air tight container. Dilutions of the extract were made in distilled water.

Phytochemical constituents of the extract were tested preliminarily for alkaloids with Mayers and Dragendroffs reagents, saponins glycosides with the ability to produce suds, cardiac glycosides with FeCl2 and H2SO4, flavonoids with the use of Mg and HCl, anthraquinones with Borntragers reaction, terpenoids and phytosterols with Liebermann- Burchard method and use of H2SO4, tannins with 1% gelatin and 10 % NaCl solutions, proteins and amino acids with Millons, Biuret and Ninhydrin test 4.

Alpha amylase activity can be measured by the determination of reducing groups arising from hydrolysis of soluble starch by isolated pancreatic α-amylase 5. The reduction of 3, 5-dinitrosalicylic acid to nitro-aminosalicylic acid produces a red colour, which was measured photometrically at 540 nm using Elisa-UV reader. Inhibition of starch hydrolysis by an α-amylase inhibitor results in diminished absorbance at 540 nm compared to control and standard drug (Acarbose). 1 ml of the plant extract (various concentrations i.e., 50, 100, 250, 500, 700, 1000 and 1500 µg/ml) was pre-incubated with 1 ml of the enzyme solution for 30 min and then 1ml (1% w/v) of starch solution was added. This was further incubated at 37°C for 10 min. The reaction was stopped by adding 1 ml DNS (Dinitrosalicylic acid) reagent and then the contents were heated in boiling water bath for 5 min.

The control sample without plant extract and the blank containing only the buffer solution were used. The absorbance was measured at 540 nm.  Acarbose was used as positive control in the concentration of 500µg/ml. The percentage of α-amylase inhibition was calculated by the following formula:

Alpha glucosidase inhibitory assay was screened based on the enzyme action on PNPG (p-nitrophenyl - α - D - glucopyranoside). Alpha glucosidase activity was determined by measuring the yellow coloured p-nitrophenol released from PNPG substrate 6. The intensity of colour produced during the assay was directly proportional to the activity of enzyme. The assay mixture contained 50 µl of plant extracts (at various concentrations 50, 100, 250, 500, 700, 1000 and 1500 µg/ml), 700 µl of phosphate buffer (pH 6.8) and 125 µl of enzyme solution were mixed and incubated at 37°C for 15 min. Then 125 µl of substrate solution (2.5mM PNPG) was added and incubated for 15 min at 37°C. The reaction was terminated by adding 500 µl of sodium carbonate solution. The enzymatic activity was quantified by measuring the p-nitrophenol released from the substrate at 405 nm in an Elisa –UV reader.

Plant extracts were mixed with glucose and placed in the sealed dialysis membrane and kept in the orbit shaker bath at 37°C, 150 rpm, and the movement of glucose across the membrane into the external solution was measured at periodic intervals using commercial GOD-POD kit 7. Dialysis membrane  containing 2 ml of 25 mM glucose solution mixed with 1 ml of different concentrations of plant extracts  (100, 250, 500, 1000 and 1500 µg/ml) and were placed in the centrifuge tube containing 45 ml of 0.15 M NaCl and then kept in orbit shaker bath at 37°C, 150 rpm.  The movement of glucose into the external solution was monitored at 0, 0.5, 1, 1.5, 2, 3, 4 and 5 h using GOD-POD kit. A control tube not containing the extract was compared with the test samples. Glucose concentration in the external solution was expressed as mg/dl/h.

Nitric oxide was generated from sodium nitroprusside, which at physiological pH liberates nitric acid. This nitric acid gets converted to nitrous acid and further forms nitrite ions (NO2- ), which diazotize with sulphanilic acid and couple with naphthylethylenediamine (Griess reagent), producing pink colour that can be measured at 546 nm 8. Sodium nitroprusside (10 mM, 2 ml) in phosphate buffer saline was incubated with the test compounds in different concentrations (100, 250 and 500 µg/ml) at 27°C for 30 min. After 30 min, 0.5 ml of the incubated solution was added to 1 ml of Griess reagent and the absorbance was measured at 546 nm. The nitric oxide radicals scavenging activity was calculated according to the following equation:

Acute toxicity study was designed as per the OECD guidelines- 423. General clinical observations were done on the same day. The observation period was 14 days for sub acute toxicity studies. Animals were divided into three groups and each group containing six animals. Treatment groups were administered with daily oral doses (1000 and 2000 mg/kg body weight) of TP extract and control group received normal saline per oral. The health conditions of the animals were recorded. At the end of the study (after 14 days), blood was collected from the orbital sinus for haematological and biochemical estimations. Then the animals were sacrificed to collect the pancreas, liver, lung and kidney for histopathological analysis.

The statistical package used was Graph Pad Prism version 8. The data was analyzed by Analysis of Variance (ANOVA). Values were expressed as mean ± S.E.M and those values with P < 0.05 were considered significant.

RESULTS: Preliminary phytochemical studies showed that ethanolic extract was positive for alkaloids, glycosides, flavonoids, tannins, terpenoids and negative for saponins, phytosterols and aminoacids. For enzyme inhibition assay, standard drug (Acarbose) showed 84 % inhibition on α-Amylase and 91 % inhibition on α-Glucosidase at a concentration of 500 µg/ml. Terminalia paniculata (TP) extract had enzyme inhibition activity in a dose dependent manner. TP extract shows maximum inhibition of 94.5 % on α-Amylase at 700 µg/ml and 94 % on α-Glucosidase at 1000 µg/ml as shown in Fig. 1. 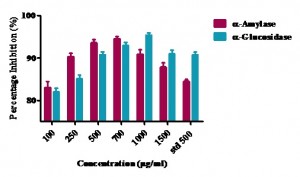 FIG. 1: PERCENTAGE INHIBITORY EFFECT OF VARIOUS CONCENTRATION OF ETHANOLIC EXTRACT OF TP ON α - AMYLASE AND α - GLUCOSIDASE ENZYME ACTIVITY COMPARED WITH STANDARD DRUG ACARBOSE. THE DATA IS INDICATED AS THE MEAN±S.E.M; (n=3)

In sub acute toxicity study for a period of 14 days, there was no significant (p<0.05) difference in body weight, feed and water consumption in the treatment groups when compared to control animals. Apart from a mild rise in SGPT, no significant differences were observed in haematological and biochemical parameters of all experimental animals. The data has been tabulated in Table 1. Histopathological studies depicted in Fig. 4 showed normal hepatocytes in the liver without any infiltrations. Islet of langerhans in pancreas of extract treated rats showed normal acini and cellular population. Kidney cells were also found to be normal without any change in the cryoarchitecture of the tissues. 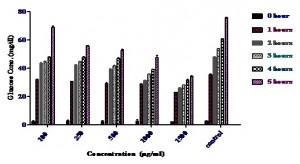 FIG. 2: EFFECT OF VARIOUS CONCENTRATION OF ETHANOLIC EXTRACT OF TP ON THE MOVEMENT OF GLUCOSE OUT OF THE DIALYSIS TUBE COMPARED WITH CONTROL SAMPLE. VALUES ARE MEAN± SEM FOR GROUPS OF THREE OBSERVATIONS. 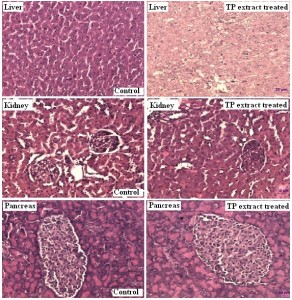 A large variety of glucosidase inhibitors have been reported from various plants, which provide protection against insects and microbial pathogens 9, 10. Inhibition of enzyme activity may be due to the presence of potential phytochemicals such as alkaloids, terpenoids, flavonoids, tannins and glycosides. The in-vitro antidiabetic evaluation of TP extract was assessed by inhibition of polysaccharide degrading enzymes such as α-amylase and α-glucosidase, and glucose diffusion method. The different concentrations of bark extract were selected for the assay between 100µg/ml and 1500µg/ml. Based on the results, the maximum inhibition was observed at 700µg/ml (94.5%) for α-amylase and at 1000 µg/ml (94%) for α-glucosidase. Surprisingly, those effects were higher than the standard reference drug Acarbose (84% for α-amylase and 90% for α-glucosidase) at a concentration of 500µg/ml. It is clearly revealing that TP extract showed a dose dependent inhibition of those enzymes.

Glucose diffusion is another useful tool for predicting of in-vitro antidiabetic effect, which exhibited the maximum decrease in glucose diffusion (34.41 mg/dl of glucose) at 1500 µg/ml for TP bark extract. It showed a concentration dependent inhibitory effect on glucose movement when compared to control values.TP extract had nitric oxide free radical inhibition activity in a dose dependent manner. The maximum inhibition was observed at 1500 µg/ml (86.12 %). Oxidative stress is the key factor in the progression and development of diabetes and its late complications. This can be prevented by scavenging the activity of antioxidants.  The in-vitro assays revealed the potential antidiabetic and antioxidant activities.

Even though the acute toxicity study was reported on 4000 mg/kg body weight dose 11, our study supported the tolerance level even at the dose of 5000 mg/kg body weight and no toxic signs and mortality were observed. The sub acute toxicity studies did not show any significant changes in the body weight and haematological parameters in the TP extract treated groups. In this study, there was no significant abnormality found in biochemical parameters except a mild rise in SGPT in both treatment groups. The histopathological examination showed no significant changes in the cryoarchitecture of liver, kidney and pancreas and other abnormality. These results indicate that TP bark extract was safe in daily doses up to 2000 mg/kg body weight for a period of 14 days.

CONCLUSION: The present study concludes that the TP bark extract has remarkable effect on enzyme inhibition activities and glucose movement. These findings point out the promising effect of TP bark as a valuable antidiabetic representative in diabetic complications. The extract had very high potential nitric oxide free radical scavenging activity. Toxicity studies suggest that the extract is reasonably safe when used sub acutely in rats at a daily dose of 2000 mg/kg body weight. In-vivo antidiabetic studies can be planned based on these promising results.