ABSTRACT: As part of a research initiative to evaluate plants used for their nutritional and herbal values, the antimicrobial activity of Solanum Melongena’s fruit and Moringa oleifera’s leaveswere investigated. Each plant part was subjected to selective extraction using solvents of varying polarity: n-C6H14, CH2Cl2, EtOAc and CH3CH2OH. The n-C6H14 and CH3CH2OH extract of these two plants were tested for their antimicrobial activity at three different concentrations of 5%, 10% and 20% of crude extracts against three pathogenic bacterial strains:  Eschericia coli, Staphyloccocus aureus and Klebsiella pneumoniae using the Disc diffusion assay. Both n-C6H14 and CH3CH2OH extracts showed antibacterial activity at a higher concentration of 20% of crude extract. The order of bacteria susceptibility to Moringa oleifera extract been S. aureus > K. pneumoniae > E. coli whereas that for Solanum Melongena extract been S. aureus > E. coli > K. pneumonia. The area of zone of inhibition ranges from 44.15 mm2 to 53.55 mm2. These investigations suggest that the extracts of Moringa oleifera and Solanum Melongena can be used as antibacterial agents in addition to their nutritional value.

INTRODUCTION: Guyana has a rich bio diversified flora whose organic and aqueous extract have been shown to possess potent and selective antimicrobial activity compared with standard antibiotics such as penicillin, nystatin and ampicillin 1-7 etc. Research in the design and syntheses of antimicrobials will be everlasting endeavours on our planet considering the fact that bacteria and fungus developed resistance to antimicrobials over a period of time 8-13. Antibiotic resistance has become a global concern 13. This is primarily due to indiscriminate use of commercial antimicrobial drugs used for the treatment of infectious diseases.

This has led to the search for new antimicrobials, both herbal and synthetic.

However, synthetic drugs/medicine has several adverse side effects which are usually irreversible when administered and the cost of synthesizing drugs in most cases is an expensive endeavour 10-12. In addition, phytochemical screening and natural products isolation can lead to novel and know natural products whose in vitro antimicrobial activity can be correlated with that of the crude plant extract 14-15.

There is also a need to assess the medicinal values of plant used as food source. Thus, efforts should be made to intensify the production of food crops in the agro-industry that have antimicrobial properties in addition to their nutritional properties. As such, the antimicrobial activity of the n-C6H14 and CH3CH2OH extract of Solanum melongena (Solanaceae) and Moringa oleifera (Moringaceae)were investigated in vitro against pathogenic Escherichia coli, Staphylococcus aureus and Klebsiella pneumoniae. Such an endeavour will be a boost to the agro industry and Health Sector. 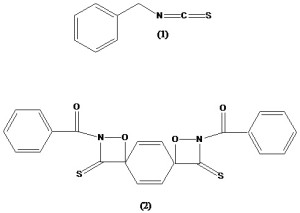 The leaves are the most nutritious and contain significant amount of vitamin B6, vitamin C, provitamin A, β-carotene, magnesium and protein. Calcium in Moringa oleifera leaves are usually complexed as crystals of calcium oxalate.

It is very important for its medicinal value. Various parts of the plant such as the leaves, roots, seed, bark, fruit, flowers and immature pods act as cardiac and circulatory stimulants, possess anti-tumour,anti-pyretic, anti-epileptic, anti-inflammatory and anti-ulcer activity 17.

Moringa oleifera preparations have been used for its anti-trypanosomal, hypotensive, antispasmodic, antiulcer, anti-inflammatory, hypocholesterolemic, and hypoglycemic activities, as well as having considerable efficacy in water purification by flocculation, sedimentation, antibiosis and even reduction of Schistosome cercariae titer 18.

Flavonoids were isolated from Solanum melongena and shown to have potent antioxidant activity. Concentrations of malondialdehyde, hydroperoxides and conjugated dienes were lowered significantly 20.

Phytochemical examination of the methanolic and aqueous extracts of the fruit and crown of Solanum Melongena showed the presence of alkaloids, saponins, steroids, tannins/ phenolics, flavonoids, proteins and carbohydrates. Ascorbic acid and phenolics both which are powerful antioxidants were present in fruit, the presence of saponins and glycoalkaloids which were also found in the fruit protects plant from microbial pathogens.

Various parts of Solanum melongena (Solanaceae) are useful in the treatment of inflammatory conditions, cardiac debility, neuralgia, ulcers of nose, cholera, bronchitis and asthma. Roots are used as anti-asthmatic and general stimulant, juice is employed for otitis, applied to ulcers of the   nose.   Leaves   are   used   in   the   treatment   of bronchitis, asthma and dysuria, also given in liver complaints and they stimulate inter hepatic metabolism of cholesterol. The fruit of Solanum melongena is a high valued vegetable all over the world because of its taste and higher percentage of Vitamin B2. The fruit is also used in the treatment of diabetes 22.

Collection of Plant material: Fresh leaves of Moringa oleifera and fruits of Solanum meologena were handpicked at Friendship village on the Corentyne, Berbice, and placed in bags. These were washed with tap, distilled water and were dried for four (4) hours. They were further air dried for one week and sent for authentication at the Centre for the Study of Biological Diversity, University of Guyana.

Reference and Control: Ampicillin was chosen as the reference for all bacteria species used: E. coli, S. aureus and Klebsiella pneumoniae. TheControl experiment consists of a plate of solidifying agar onto which was inoculated pure solvent with microorganism mixed in a 1:1 portion 23-24.

Positive control: In this study, tetracycline was used as a positive control to screen and analyze the antimicrobial properties of the different medicinal plants. This antimicrobial drug is clinically effective against both gram- negative as well as gram positive microbes. Side-effects from tetracycline are not common. Use of the antibiotic have known to cause stomach or bowel upsets and on rare occasions, allergic reactions.

In vitro Antimicrobial Susceptibility Tests: The Disc diffusion method was used to screen plant extracts for its in vitro antimicrobial activity. Plates were labeled according to extract, concentration and bacteria. Using the Disc diffusion assay 24,an inoculum containing bacteria cells were applied onto Mueller Hinton agar plates. A sterile swabbed was dipped into the bacteria culture and was uniformly spread on the surface of the Mueller Hinton agar. This was allowed to dry for 10 minutes. On each plate, four discs were placed equidistant using a sterilized tweesor. One of these is the reference disc onto which antibiotic was also applied and was used as the positive control: ampicillin for the bacteria. The reference antibiotic disc contained 200mg antibiotic/ml.

The discs were made by cutting discs (5-6mm) from a filter paper with a sterilized perforator. Each disc was impregnated with the anticipated antimicrobial plant extract of Solanum Melongena and Moringa oleifera at appropriate concentrations of 5%, 10% and 20 % of n-C6H14 or CH3CH2OH extract using a microlitre syringe. The plates were then incubated with the test organism: Bacteria at 37ºC for 24 hours. The antimicrobial compound diffuses from the disc into the medium. Following overnight incubation, the culture was examined for areas of no growth around the disc (zone of inhibition, ZOI). The diameter of the zone of inhibition was measured using a transparent plastic ruler. Each experiment was done in triplicates (table 1).

TABLE 1: MEAN, STANDARD DEVIATION AND AREA OF ZONE OF INHIBITION FOR THE n-C6H14 AND CH3CH2OH EXTRACT OF SOLANUM MELONGENA AND MORINGA OLEIFERA

TABLE 2: AREA OF ZONE OF INHIBITION, ZOI FOR THE POSITIVE CONTROL, TETRACYCLINE AGAINST PATHOGENS

DISCUSSION: Antimicrobial properties of Solanum melogena and Moringa oleifa C2H5OH and n-C6H14 extracts were investigated in vitro at concentrations of 5%, 10% and 20% using the Disc diffusion assay. Investigations were done against three pathogenic microorganisms: E. coli, S. aureus and Klebsiella pneumonia using the Disc diffusion assay. The area of zone of inhibition was used as the guage of the plant’s antimicrobial properties. Larger the diameter of zone of inhibition, greater is the plant’s antimicrobial activities. It is anticipated through the antimicrobial activity of plant extract, no area of growth will be induced around the disc. Bacteria colonies sensitive to the antimicrobial are inhibited at a distance from the disc whereas resistant strains grow up to the edge of the disc. Discs applied to the plates already streaked with bacteria and the fungus.

A comparison of the effect of the various solvent extracts against the three pathogenic microorganisms at three different concentrations can be discussed. In general, there seem to be an increase in the plant’s extract antimicrobial activity as the concentration of the extract is increased. For example, Solanum melongena C2H5OH extract induces area of zone of inhibition (ZOI) of 40.69, 43.33 and 45.7 mm2 against E.coli as the concentration of the plant extract increased from 5% to 20%. Likewise Moringa oleifera CH3CH2OH extract induces area of zone of inhibition of 37.69, 42.17 and 49.36 mm2 against Klebsiella pneumoniae at concentration of 5, 10 and 20% of extract respectively.

However, there were exceptions to the above general increase in bacterial activity. For example, Solanum melogena n-C6H14 extract showed an increase in antimicrobial activity against S.aureus followed by a decrease at the 20% concentration. For example, area of zone of inhibition of 35.87 mm2, 39.57 mm2 and 19.86 mm2 was observed at concentration of 5, 10 and 20% of extract. Moringa oleifera C2H5OH extract also showed a decreased in antimicrobial activity followed by an increase. 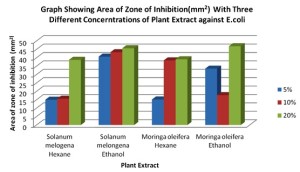 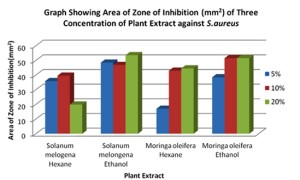 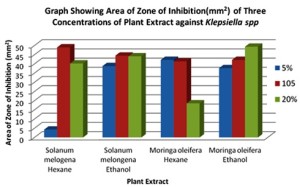 FIG. 4: AREA OF ZONE OF INHIBITION (mm2) OF PLANT EXTRACTS AGAINST KLEPSIELLA SPECIES AT CONCENTRATION OF 5, 10 AND 20%.

Graph 3 shows the area of ZOI (mm2) at 5%, 10% and 20% concentrations of plant extract against colonies of Klebsiella pneumoniae.  From the graph it can be observed that the n-C6H14 extract of Solanum melogena induces a higher area of zone of inhibition against Klebsiella pneumoniae compared with Moringa oleifera at the 20% concentration. Values of 40.24 cm2 and 18.54 cm2 were registered respectively. Likewise, C2H5OH extract of Solanum Melongena were more antimicrobial than Moringa oleifera at 20% concentration of plant extract. Areas of ZOI registered were 44.15 mm2 and 49.36 mm2 respectively.

Antimicrobial activity was also investigated for the positive control, tetracycline against the pathogens. It is found that the diameter of the zone of inhibition, ZOI is less than that induced by the n-C6H14 and CH3CH2OH extract of both plants. This suggests and justifies the use of these fruits as potent antimicrobial agent in addition to their nutritional status.