Categories Menu
Home » THE CONCEPT OF MICROBUBBLE AS A DRUG DELIVERY SYSTEM: AN OVERVIEW

THE CONCEPT OF MICROBUBBLE AS A DRUG DELIVERY SYSTEM: AN OVERVIEW

THE CONCEPT OF MICROBUBBLE AS A DRUG DELIVERY SYSTEM: AN OVERVIEW

Micro bubbles are small spherical type of bubble which consists of a gas, they are separated from each other, so they cannot agglomerates. Actually, they have size range in micrometers usually  1-100 micrometer. They are capable of penetrating even into the smallest blood capillaries & releasing drugs or genes, incorporated on their surface, under the action of ultrasound. Microbubbles in general have a wide variety of applications. They are used as a contrast agent in diagnosis. They are widely applicable in gene delivery due to its very important silent feature. Majorly main huge research is going on drug delivery by microbubble with ultra sound. Most of the physicians today prefer imaging with ultrasound in combination with microbubbles compared to other diagnostic techniques for low cost and rapidity.

INTRODUCTION1, 2, 3: Now a day, Micro bubble drug delivery system attracting researcher due to its wide scope and lots of application. They are now used in areas in advanced and conventional science and technologies like heat removal, energy conversion, cleaning and sterilization by shock waves etc. As a name suggests, we can predict meaning of micro bubble as bubbles with diameters less than several tens of micron.

Micro bubbles are small spherical type of bubble which consists of a gas; they are separated from each other, so they cannot agglomerates. Actually, they have size range in micrometers usually 1-100 micrometers.

Now a day, a lot of research is going on micro bubble. The micro bubbles, which mostly contain oxygen or air, can remain suspended in the water for an extended period.

Gradually, the gas within the micro bubbles dissolves into the water and the bubbles disappear. Micro bubbles are applicable to a wide variety of field like medical field, Gene therapy etc.

In medical field used to scan the various organs of body and recently they are being proposed to be used as drug or gene carriers and also for treatment in cancer therapy. They are also used increase the aquaculture productivity, increase the hydroponic plant growth and improve the quality of water and used in sewage treatment.

Usually, they are classified into main two categories:

Components of Microbubbles 1, 2, 4, 5: Micro bubbles comprise of basically 3 phases in which inner, middle and outer most phase. They are as following: 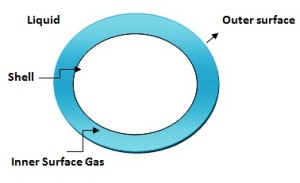 1)      Inner most layer: It is generally gas layer. The gas phase can be a single or a combination of gases can be used. Combination gases are used to cause differentials in partial pressure & to generate gas osmotic pressures which stabilize the bubbles. In combination of gas system there are two types of gas. Primary Gas known as First gas. Generally, it is air. Sometime nitrogen is also used as first gas. Secondary gas is a Gas Osmotic Agent. They are less soluble in blood and serum and they have sufficient partial or vapor pressure at the temperature to provide the desired osmotic effect.

2)      Shell Material: The shell material covers the gas phase. Main important of this layer is it is act as a region in which drug molecule attached to shell layer which are used to achieving targeting  various components of organ and tissue.  It is useful for the elasticity or compressibility of micro bubbles. If more elastic, it has capacity to withstand before bursting and breaking up which increases the residence time of these bubbles in body. The material are used as a shell material like Proteins like albumin, Carbohydrates like galactose, Phospholipids like phosphotidyl- choline, phosphotidyl-ethanolamine etc., Bio-degradable polymers like polyvinyl alcohol, polycaprolactone etc.

3)      Aqueous or Liquid Phase: The external, continuous liquid phase in which the bubble resides typically made up of surfactant or foaming agent. Surfactants suitable for use include any compound or composition that aids in the formation & maintenance of the bubble membrane by forming a layer at the interphase. The foaming agent or surfactant may be made up of a single component or any combination of compounds, such as in the case of co surfactants.

4)      Other Components: The other components that may be incorporated in the formulation include viscosity modulators, air solubility modifiers, osmotic agents, stabilizers, chelators, buffers, salts& sugars can be added to fine tune the microbubble suspensions for maximum shelf life & contrast enhancement effectiveness. Such considerations as sterility, isotonicity & bio-compatibility may govern the use of such conventional additives to injectable compositions. These help in improving the property of a microbubble and make a stable formulation.

Preparation Method of Microbubbles 6-10: The various methods that can be used for the preparation of these microbubbles are as follows:

As the process continues, an outer shell wall is formed which encapsulates an inner core of nonsolvent liquid. Once complete, the resulting microcapsules can then be retrieved, washed & formulated in a buffer system. After that drying, preferably by freeze-drying, removes both the nonsolvent organic liquid core & the water to yield air filled hollow microbubble.

Pattle 14 characterized microbubbles prepared with lung extracts and found that the bubbles initially shrank but then maintained a constant size (12 µm). The microbubbles remained unbroken even after several washes with distilled water but disappeared in air-free water. This indicated that the bubbles were stabilized by a layer of solid, water-insoluble substance (later identified as PS) and freely permeable to air.

Now a day applications of biosurfactant-based microbubbles are mainly on ultrasound diagnosis and therapy and remediation or bio-remediation of contaminants. Ultrasound-induced microbubble destruction thus provides a promising therapeutic approach for targeted treatments.

In Ultrasound mediated drug delivery technology, ultrasound and microbubbles that are partially filled with cancer drugs. Microbubbles are to be injected into the patient’s bloodstream and carried to the site of a tumor. The arrival of the microbubbles at the tumor can be monitored with ultrasound imaging.

Upon arrival of the microbubbles in the tumor, they will then be ruptured with a focused ultrasound pulse to release the drugs. As the drugs are only released at the site of the tumor, the patient’s total body exposure to them could be limited, which for certain types of cancer could help to reduce the unpleasant side effects of chemotherapy.

FIG. 2: INCORPORATION OF DRUG INTO MICROBUBBLES 2, 18

1)      Incorporation of drug into these Microbubbles

2)      Drug release from these Microbubbles

In Drug release from Microbubbles, bursting or breakup of the microbubble on application of ultrasound occurs called cavitation. On cavitation the body fluids start creating acoustic cavitation. When microbubble oscillate gives raise small eddies therefore rise of micro streaming or micro jets resulting in increase in permeability of the cell membrane & facilitating drug transfer across the membrane.

This Feature will significantly useful in gene delivery. Charged drugs can be stabilized in or onto the surfaces of microbubble by virtue of electro-static interactions lipid-coated micro bubbles to bind DNA The gene is released when ultrasound energy cavitates the microbubble.

CONCLUSION: The application of microbubble with ultrasound which gives synergistic effect for drug or DNA delivery. Different approaches to non-viral gene and drug delivery are being explored, and much has been learned from viruses that have evolved into extremely efficient infection mechanisms.

The use of targeted microbubble has challenging therapeutic options, not only in CVS disease but also in treatment of inflammatory and malignant disease.

In the coming years; this technique needs further development to make it available for clinical application, imaging microscopy, offer excellent opportunities to study in vitro this process at the (sub)cellular level in real-time, thereby creating the possibility of visualizing the interaction of fluorescent-labeled Microbubbles and myocardial or endothelial cells under ultrasound pressure.