INTRODUCTION: The majority of the reported natural products originate from terrestrial habitats. However, marine bioprospecting represents a vast and relatively untapped area that is likely to be intensified.

Marine organisms have been shown to be a very rich source of unique and biologically active secondary metabolites that have attracted the interest of both chemists and pharmacologists. Some of these compounds are extremely potent, which are produced in response to the harsh conditions that occur in the marine environment 1–3.

In recent years, marine natural products have been a source of new drugs with diverse and often unique structures 4, many associated with interesting biological properties that are in pre-clinical development and on the market, with others making significant contributions to our understanding of cellular processes at the biochemical level 5-7. In particular, the richness of unique metabolites produced by marine sponges has attracted the attention of those trying to develop new drugs 8. Several articles have been published on the biological activities of marine sponges, but the mechanisms responsible have yet to be elucidated 9, 10. As of 2018, there are 296 new reported compounds from marine sponges, with pharmacological activities such as anticancer, antifungal, antiviral, anthelmintic, antiprotozoal, anti-inflammatory, immunosuppressive, neuro-suppressive, and antifouling properties 11, 12.

Human cancer-derived cell lines are fundamental models used in laboratories to study the biology of cancer and to test the therapeutic efficacy of anticancer agents 13. These cultured cancer cell lines are the most widely used in-vitro models and have formed the basis of cell-based assays that are used for screening collections of compounds to determine its effects on cell proliferation or show direct cytotoxic effects that eventually lead to cell death 14, 15. The MTT (3-(4,5-dimethylthiazol-2-yl)-2, 5-diphenyltetrazolium bromide) tetrazolium reduction assay was the first homogeneous cell viability assay developed for a 96-well format that was suitable for high throughput screening (HTS). This technology has been widely adopted and remains popular in academic labs, as evidenced by thousands of published articles 16-19.

The Indo-Malay archipelago and South China sea have approximately 1,200 described species, with the Philippines having less than 500 species documented 20. In the past two decades, bio-activities of Philippine marine organisms were reported, 21, 22 leading to the isolation of compounds that are cytotoxic to a variety of cancer cell lines and act on specific molecular targets in major cell signaling pathways implicated in various diseases 23, 24. In this study, the hexane, dichloromethane (DCM), ethyl acetate and aqueous crude extract of two marine sponges collected off the coast of Zamboanga City, Philippines, were evaluated for potential cytotoxicity against cancer cell line using MTT Assay. The two marine sponges were Stelodoryx procera Topsent 1904 and Rhabda-strella sp. S. procera belongs to the family Myxillidae 25, and marine sponges belonging to this family are not extensively studied. Rhabdastrella sp. is a genus of marine sponges belonging to the family Ancorinidae. They are mostly found in Indo-West Pacific, Asian tropical oceanic shallow waters and are hermaphroditic 26. There are numerous compounds isolated from Rhabdastrella sponges, mostly are isomalabaricane triterpenoids which have been shown to be toxic against a panel of cancer cell lines 27.

Collection of Sponges: The marine sponges Stelodoryx procera Topsent 1904 and Rhabdastrella sp., were collected off the coast of Brgy. Sinubong, Zamboanga City, Philippines on April 2015 by hand scuba at a depth of 5-10 meters by local sea divers. The samples were stored in sterile containers and brought to the laboratory. Taxonomic identification of the marine sponges is credited to Dr. Ephrime B. Metillo of the Department of Biological Sciences, MSU-IIT.

Sample Preparation and Solvent Partitioning: The freeze-dried and pulverized sponge sample was soaked in 1:1 EtOAc-MeOH solution for three (3) days, filtered in-vacuo to obtain the nonpolar extracts of Stelodoryx procera Topsent 1904 (ZP12NP) and Rhabdastrella sp. (ZP07NP). The said nonpolar crude extracts underwent a series of solvent partitioning using appropriate solvents. The nonpolar extracts were dissolved in methanol and centrifuged. The supernatant liquid was regarded as the methanol fraction, and the residue underwent another round of solvent partitioning. The methanol extract was partitioned with twice the volume of hexane. The upper layer was collected and concentrated in-vacuo and regarded as the hexane fraction (ZP12NPh, ZP07NPh). The upper portion was mixed with twice the volume of water and partitioned with twice the volume of dichloro-methane. The lower layer was concentrated in-vacuo and labelled as the dichloromethane (DCM) fraction (ZP12NPd, ZP07NPd). The upper layer was then concentrated in-vacuo and freeze-dried to obtain the aqueous fraction (ZP12NPa, ZP07NPa). The residue collected from the centrifugation of the nonpolar extract was dissolved in ethyl acetate and concentrated in-vacuo to afford the ethyl acetate fraction (ZP12NPea, ZP07NPea).

Fractionation of Rhabdastrella sp. DCM Fraction, ZP-07NPd: About 280.0 mg of the DCM (ZP-07NPd) fraction was subjected to initial purification on silica column (70-230 mesh) through gravity column chromatography with a gradient concentration of hexane/ethyl acetate and ethyl acetate/methanol solvent system in 5% increments, which were monitored with thin layer chromatography. Fractions were then pooled according to the TLC profile to afford twenty-one (21) sub-fractions.

Fractionation of S. procera Hexane Fraction, ZP-12NPh: The hexane (ZP-12NPh, 190.0 mg) fraction was fractionated on a silica column (70-230 mesh) through gravity column chromatography with gradient concentration of hexane/ethyl acetate and ethyl acetate/methanol solvent system in 10% increments which were monitored with thin layer chromatography. Fractions were then pooled according to the TLC profile to afford eight (8) sub-fractions.

TLC Analysis of Sub-fractions: Plastic-backed (Silica gel 60 F254) TLC plates were used in all TLC analyses. For this study, solvent systems comprising of hexane, chloroform, and methanol were used for all the TLC analyses with the following ratios: hexane: CHCl3 (in 0-100% in 25% increments), CHCl3: MeOH (in 0-100% in 25% increments). Visualization of TLC plates was done first by short and long wavelength (254 and 365 nm λ) UV detection. TLC spot detection was using vanillin-H2SO4 spray reagent (1.5 g vanillin in 25 mL ethanol + 2.5 mL conc. sulfuric acid) for general application after UV detection. The color development was accomplished by heating the treated TLC plates in an oven at 110 °C for 5-10 min.

Cytotoxic Activity of Marine Sponge Rhabdastrella sp.: The solvent partitioning of the nonpolar crude extract from Rhabdastrella sp (ZP07NP) afforded hexane (ZP07NPh, 141.3 mg), DCM (ZP07NPd, 316.1 mg), aqueous (ZP07NPa, 1088.3 mg), and ethyl acetate (ZP07NPea, 109.6 mg) fractions. The bioactivity of the said fractions was tested against colon (HCT116) and liver (HePG2) cancer cell lines using MTT assay. Cytotoxicity was classified based on the cell viability values obtained as follows: < 25%, high cytotoxicity; 25-70%, moderate cytotoxicity; and >70% were qualified as low cytotoxicity 28. The results are tabulated and compared in Table 1 and Fig. 1. All four fractions exhibited moderate cytotoxicity against HCT116, with ZP07NPd having the most considerable activity at 30 mg/mL. Based on such results, ZP07NPd was subjected to initial fractionation on silica gel through gravity column chromatography to afford twenty-one (21) sub-fractions. Cytotoxicity screening of the sub-fractions was done using MTT assay against colon (HCT116) cancer cell line at 30 mg/mL. Table 2 and Fig. 2 summarize the results showing ZP07N-Pd2, ZP07NPd3, ZP07NPd4, ZP07NPd5, ZP07N-Pd9, ZP07NPd10, ZP07NPd13, and ZP07NPd15 - ZP07NPd21 as the sub-fractions with high toxi-cities against HCT116. A generalization that can be drawn from these results is that Rhabdastrella sp. could be a rich source of bioactive compounds based on literature 27.

TABLE 1: CYTOTOXICITY OF PARTITION FRACTIONS FROM THE NONPOLAR CRUDE EXTRACT OF RHABDASTRELLA SP. AGAINST HCT116 AT 30 mg/mL 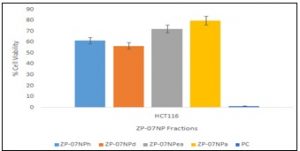 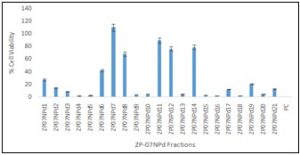 TABLE 2: CYTOTOXICITY OF DCM SUB-FRACTIONS FROM THE NONPOLAR CRUDE EXTRACT OF RHABDASTRELLA SP AT 30 mg/mL

Cytotoxic Activity of Marine Sponge Stelodoryx procera Topsent 1904: The solvent partitioning of the nonpolar crude extract from Stelodoryx procera Topsent 1904 (ZP12NP) has afforded hexane (ZP12NPh, 199.1 mg), DCM (ZP12NPd, 284.8 mg), aqueous (ZP12NPa, 1076.9 mg) and ethyl acetate (ZP12NPea, 32.5 mg) fractions. The MTT assay results of these fractions are tabulated and compared in Table 3 and Fig. 3. All four fractions exhibited moderate cytotoxicity against HCT116 in which ZP12NPh had the most considerable activity at 30 mg/mL. The hexane fraction (ZP12NPh) was subsequently purified through silica column chromatography to give eight (8) sub-fractions. MTT assay results revealed high toxicity of fractions ZP12NPh4 and ZP12NPh5 against HCT116 at 30 mg/mL, while ZP12NPh6 expressed low cytotoxicity (Table 4 and Fig. 4).

The toxicity of fractions 7 and 8 was not tested due to very low weights. These results suggest that bioactive compounds could be present in S. procera, worthy of further investigation since the literature survey has revealed no reported compounds from this particular marine sponge to date. 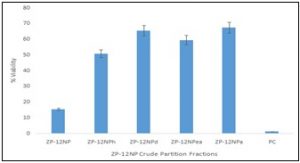 TABLE 4: CYTOTOXICITY RESULTS OF ZP12NPH SUB-FRACTIONS AGAINST HCT116 AT 30 mg/mL 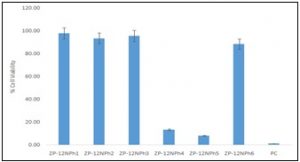 CONCLUSION: The MTT assay of the crude extracts of the marine sponges, Stelodoryx procera Topsent 1904 and Rhabdastrella sp., from the coast of Zamboanga City, Philippines, proved that the said assay could be a reliable method in screening compounds with medicinal properties from natural sources. The purification of nonpolar crude extracts from and Stelodoryx procera Topsent 1904 and Rhabdastrella sp., had produced sub-fractions that could be considered cytotoxic and hence could be a source of drug leads. The results suggest that a more rigorous screening should be done in all fractions of the same sponge sample in order to have a more effective search of compounds with potential medicinal values. Furthermore, the data from this study were used as the basis of a thorough investigation of the chemical constituents of these marine sponges.