ABSTRACT: Rosella (Hibiscus sabdariffa L) calyx has been reported to have an antioxidant activity. Antocyanidin is the major compound of rosella and has low bioavailability as an ionic form. Rosella extract is an ucceptable due to high acidity. Development of chitosan nanoparticle from Hibiscus sabdariffa extract were expected to improve the bioavailability and the acidity problem. We studied the optimum pH and composition ratios of chitosan, extract and tripolyphosphate (TPP) to develop chitosan-nanoparticle of rosella extract. We used rosella calyx both from Indonesia and Thailand to compare the physical characteristic the extract and nanoparticles. Rosella was extracted using 60% ethanol and water, followed by evaporation using evaporator and dried by freezedryer. The optimum formation of chitosan-nanoparticles of rosella extract were observed including pH formation and composition ratios between extract: chitosan: TPP. The physical charactersitics of nanoparticles were observed using transmission electron microscope (TEM) and particle size analyzer (PSA).  We found that optimum composition of extract: chitosan : TPP ratios were 2 : 1 : 0.1, with optimum formation of chitosan in acetate buffer pH 4. The characteristic of nanoparticles were spherical shapes with particles size range 60 to 300 nm, polydispersity index around 0.3 and zeta potential 39.19 to 62.26 mV. The nanoparticles has high entrapment efficiency of flavonoid active compound of 81.98 to 83.83%.

INTRODUCTION: The calyx of Hibiscus sabdariffa (roselle) has been used traditionally for curing various diseases 1. Rosella calyx extract have been reported as antioxidant 2, immunomodulator 3, antidepressant 4, antihyperlipidemia 5, antidiabetic 6, and hepatoprotective agent 7. Various antioxidant constituents have been found in the calyx of Hibiscus sabdariffa including anthocyanin, β-carotene, β-sitosterol, hibiscetin, hibiscin, hibiscitrin, and quercetin 1.

Rosella calyx extract has a high acidity level. This causes the anthocyanin are in the ionic form and lower  bioavailability.  High acidity level also contributes to the disruption of gastrointestinal mucosal in daily use, and making it unacceptable.  Nanoparticles are defined as particulate dispersions (colloidal system) or solid particles with a size in the range of 10-1000nm 8. Nanoparticles formulation is needed to increase the bioavailability of active compounds penetration. It also improve the properties of poor solubility drug, instability, poor bioavailability, and potentially strong side effects that require drug enrichment at the site of action 9.

The objective of this study were to obtain the optimal formula based on composition of chitosan, rosella calyx extract, the concentration of tripolyphosphate (TPP) and the pH degrees of acetate buffer on dissolution of chitosan in preparation of nanoparticles and followed by characterization.

The rosella calyx were collected from Madiun (East Java, Indonesia) and Narathiwat (Southern Thailand). After it had been dried were pulverized and stored in a desiccator before extraction.

The extraction of dried rosella calyx were performed using maceration method with 60% ethanol and boiling method with water for one hour. After this process the ethanol extract and water extract was found. Each extract was evaporated to get the concentrated extract and followed by freeze dryer.

Optimization of exctract and chitosan ratio:

Chitosan nanoparticles were prepared based on ionic gelation method. Optimization of composition between chitosan and rosella extract was carried out by mixing chitosan solution and rosella extract in ratio: 1/3, 1/2, 1/1, 2/1, or 3/1 (mass ratios) in phosphate buffer solution pH 4.0. The mixture was homogenized using vortex for 30 seconds and then add TPP solution in a final concentration of 0.2 mg/ml. The dispersion of nanoparticles was observed for 7 days. The optimum formula were found if there was no precipitation (Brown Motion).

After the optimization ratio of chitosan and rosella extract has been carried out, then was followed by optimization of TPP ratio. Various concentrations of TPP (0.2, 1, 2 mg/ml) were prepared in aqueous solution. The optimum of TPP ratio was observed in 1/10, 1/2, and 1/1 mass ratios between chitosan (with extract) and TPP. The best ratio was observed by the absence of precipitation. The observation was carried out during 7 days.

After the optimum ratio between rosella exctract:chitosan:TPP was found then was followed by studying on the buffer pH. The various buffer pH use were 4.0, 5.0, and 6.0. The optimum pH was observed in the absence of precipitation during 7 days.

The optimum formula of chitosan nanoparticles of H.sabdariffa extract:

Chitosan nanoparticles were prepared based on ionic gelation method. The H. sabdariffa extract including water, and ethanolic extract from Indonesia and Thailand were observed. The previous study reported that characterization of chitosan nanoparticles was significantly influenced by the ratio between extrat, chitosan and TPP 13,14.

The study found that rosella extract:chitosan:TPP ratio was 2:1:0.1. The ratio of chitosan needed was less than the extract due to low concentration, the gelation medium has low viscocity. The low viscosity could supply the better medium for nanoparticle formation 15. The smaller nanoparticles may be attributed to a greater cross-linking density by the interaction between chitosan matrix and the flavonoid groups in rosella calyx.

The formula ratio of TPP was 0.1 less than extract and chitosan. The large amount of TPP gives the precipitation of nanoparticles due to the bigger size particle formation (microparticle size) 16.

Acetate buffer was used to dissolve chitosan. This study was found that the pH 4 was the optimum pH. Previous research found that size of nanoparticles decreased with increasing of pH, indicating an influence of pH on particle size 14. In this study we found that association between extract chitosan and TPP is driven by pH. The charge degree of both chitosan and TPP were influenced by pH value 11. At a critical low pH, most of the amino groups of chitosan are protonated, enabling the chitosan molecule with an extension confirmation due to strong charge repulsion.

The TPP molecule is also protonated, leading to lower charging density of the molecule. In this case, the chitosan molecules cannot be sufficiently cross-linked by TPP to form stable particles. Along with increase of the pH value, the deprotonation degree of TPP is increased gradually, while the protonation degree of chitosan is less influenced when the pH value is below 5. At a proper pH such as pH 3.5, the charge interaction between these two molecules becomes strong enough, thus stable chitosan nanoparticles were obtained with a relatively larger size.

At a higher pH value, the charging degree of TPP molecule is enhanced again, which neutralizes the chitosan to a greater extent. Consequently, the particles shrink their size again. Protonated amino group on acid solvent could bind effectifely to the active ingredient, thus forming stable nanoparticles and having a small particle size 14.

The hypothetic interaction between chitosan, TPP and cyanidine structure were shown in Figure 1. The interaction involved the electrostatic and hydrogen bonding interaction. 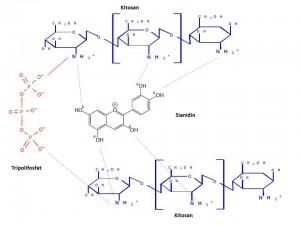 The interactions of chitosan nanoparticle formulations and rosella extract is the electrostatic interaction between the positively charged amine groups of chitosan which protonated under acidic conditions and oxygen atoms in the structure of the flavonoid/polyphenol compounds which are The TPP stabilized this interaction. 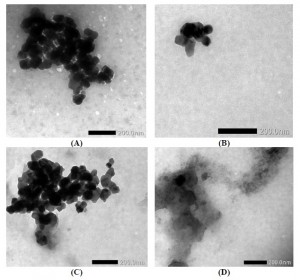 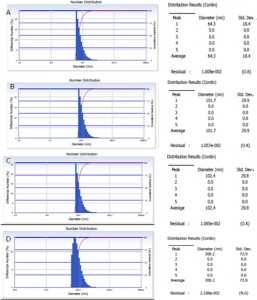 The zeta value of +/-30 showed the stable suspension as the charge on the surface of the particles prevents aggregation. The zeta potential value were shown in Table 1 and Figure 4. Zeta potential values of the four extract formulations of nanoparticles found in this study has a good physical characteristic. 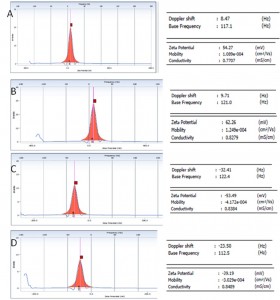 The entrapment Efficiency was affected by the solubility of the active ingredient in a polymer matrix, polymer composition used, molecular weight, interaction of active ingredient with the polymer, and the presence of functional groups 8.

CONCLUSION: The results showed that rosella extracts: chitosan: tripolyphosphate optimum ratio was 2: 1: 0.1, with optimum dissolution of chitosan in acetate buffer pH 4 and at this pH, the chitosan was the optimum to dissolve as well. The nanoparticles has a good charactericstic including the spherical shape, the  average particle size of chitosan nanoparticles ethanol extract at 60-300 nm, zeta potential and  high Entrapment Efficiency.

ACKNOWLEDGMENT: The authors thanks to Ahmad Dahlan University and Rangsit University for research funding through the International Collaborative research scheme.