Categories Menu
Home » THE EFFECT OF ELICITORS ON THE PRODUCTION OF VASICINE FROM JUSTICIA ADHATODA L. CELL SUSPENSION CULTURES

THE EFFECT OF ELICITORS ON THE PRODUCTION OF VASICINE FROM JUSTICIA ADHATODA L. CELL SUSPENSION CULTURES

THE EFFECT OF ELICITORS ON THE PRODUCTION OF VASICINE FROM JUSTICIA ADHATODA L. CELL SUSPENSION CULTURES

In this study, α-naphthyl acetic acid and mannitol were used as elicitors to improve the productivity of useful metabolite, vasicine for archiving high concentration in Justicia adhatoda L. cell suspension cultures. When the cells were treated with 3mg 100 ml-1 suspension of α-naphthyl acetic acid,   the vasicine concentration was increased by 1.65 mg ml-1 in 15 days culture compared to untreated cells. 0.32M 100ml-1 mannitol could also promote the synthesis of vasicine in the cell cultures. After 15 days of the cell culture, it was found that the vasicine concentration was 1.48 mg ml-1 more than the control cell cultures.

INTRODUCTION: Plant cell culture is often an effective system to study the biological significance of bioactive metabolites under in vitro conditions, as well as for producing natural products for bioprocessing applications 1. It has been industrially used for the synthesis of secondary metabolites 2. The regular increase in demand in world market for natural, renewable products has refocused attention on in vitro plant materials as potential factories for secondary phytochemical products, and has paved the way for new research exploring secondary product expression in vitro 3.

Plants express a number of morphological and physiological responses to a range of physical and chemical factors from the environment, known as elicitors, which activate chemical defenses in plants 4. The synthesis of plant secondary metabolites can be stimulated by acting on different parameters: environmental factors, use of precursors of the targeted molecules, use of elicitors and, genetic transformation of the plant 5. Secondary metabolites production in entire plants depends on endogenous 6 and exogenous factors 7.

Enhancement of secondary metabolites by elicitor application is one of the few strategies which have recently found commercial application. Elicitors can be abiotic or biotic compounds of mainly microbial origin or non-biological origin, which upon contact with higher plant cells; trigger the increased production of pigments, flavors, phytoalexins and other defense related compounds 8.

The recent development of elicitation has opened a new avenue for the production of secondary compounds. Secondary metabolite synthesis and accumulation in cell cultures can be triggered by the application of elicitors to the culture medium 9.

Vasicine produced by Justicia adhatoda is used for the treatment of various diseases and disorders, mostly for respiratory tract ailments. But the natural production of vasicine is insufficient to fulfill the requirements. This work reports the successful approach for the elevated production of vasicine by cell suspension cultures after using α- naphthyl acetic acid (NAA) and mannitol as elicitors.

Present study was conducted to examine the effect of elicitors (α-naphthyl acetic acid (NAA) and mannitol) on the production of vasicine in the cell suspension cultures of J. adhatoda. The plant shows wide seasonal variation in vasicine content in its leaves. It exhibited higher levels of vasicine twice in a year i.e. 3.0% in March and 1.4% in September. Interestingly, it coincided with the flowering of the plant. In March, it was full bloom condition and in September, it was partial flowering. During the vegetative stage, the plant contained very low concentration of vasicine 10. The yield of the vasicine from different samples in India ranged from 0.541 to 1.105% on dry basis. Yield as high as 2.18% on dry basis has been reported from a foreign sample of which more than half was the l -form and the remainder the dl-form of the alkaloid 11.

The present study mainly aimed to analyze the effect α-naphthyl acetic acid and mannitol, as elicitors on the production of vasicine from cell suspension cultures of J. adhatoda L.

Extraction of Secondary Metabolite from Suspension Culture: From the suspension culture of friable calli, the supernatant was collected and extracted with methanol for 30 minutes by using a separating funnel. The extracts collected and concentrated to half the volume.

All the procedures were done in three replicates

TABLE 1: INFLUENCE OF NAA AS ELICITOR FOR ENHANCING THE PRODUCTION OF VASICINE IN SUSPENSION CULTURES OF J. ADHATODA

TABLE 2: INFLUENCE OF MANNITOL AS ELICITOR FOR ENHANCING THE PRODUCTION OF VASICINE IN SUSPENSION CULTURES OF J. ADHATODA

TABLE 3: PRODUCTION OF VASICINE IN SUSPENSION CULTURES OF J. ADHATODA WITHOUT AN ELICITOR (CONTROL) 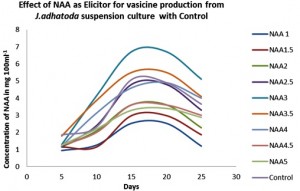 FIGURE 1: EFFECT OF NAA AS ELICITOR FOR VASICINE PRODUCTION FROM J. ADHATODA SUSPENSION CULTURE WITH CONTROL 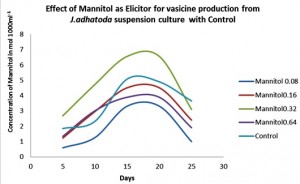 FIGURE 2: EFFECT OF MANNITOL AS ELICITOR FOR VASICINE PRODUCTION FROM J. ADHATODA SUSPENSION CULTURE WITH CONTROL

DISCUSSION: Vasicine is one of the major alkaloid produced by J. adhatoda. It has great importance in Ayurveda due to its bronchodilatory effect. It also has anti-inflammatory, anti-bacterial activity 14, anticestodal activity 15, antileishmanial activity 16 and anti-helminthic activity 17.

Mannitol is a polyol normally synthesized in numerous species of vascular plants, which serves as an alternate metabolic reserve as well as an osmoprotectant. Mannitol accumulation increases when plants are exposed to a low water potential and the most obvious function of this compound is in osmotic adjustment.

Therefore, mannitol has been proposed to enhance tolerance to water deficit stress primarily through osmotic adjustment 18. It is already described the role of mannitol as hydroxyl radicals scavenger.

The mannitol added to cultures causes a mild osmotic stress to cell cultures and, in time, this treatment may activate an adaptive mechanism that can render the cells tolerant to more severe treatments. On a medium supplemented mannitol, the cultured cells take up mannitol that can act as an osmoprotectant. However, accumulation of mannitol may have adverse effects, even though mannitol is a compatible solute, the target plant may not tolerate high levels of mannitol 19.

According to 10, 11, J. adhatoda showed seasonal variation and the vasicine content was high in dry climate. Hence the results strongly supported addition of mannitol as elicitor for vasicine production. NAA is also act as a good elicitor and support the production of vasicine.

In the present work, the cell cultures showed great sensitivity towards elicitors by producing vasicine when supplemented with NAA and Mannitol at concentration as 3mg 100ml-1 and 0.32M 100ml-1 respectively. The increased production, through elicitation, of the secondary metabolites from plant cell culture has opened up a new area of research, which could have important economic benefits for bio industry. Elicitation studies have shown promise in increasing yields and cutting production costs.