ABSTRACT: Ethanol extract of kerehau leaves is known to have anti-inflammatory and antioxidant activities with the potential to prevent atherosclerosis. This study aims to determine the ability of kerehau ethanol extract in reducing the lipid levels, the lipid ratios, and the number of foam cells in the blood vessel walls. This study employed in-vivo and ex-vivo experiments on male rats of Wistar strain induced with high-fat feed and 25% fructose for 45 days. The rats were divided into 6 groups (n=3), namely negative control (0.5% CMC-Na), positive control (induction), simvastatin (0.9 mg/kg bw), and 3 groups of test extracts with a dose of 75, 150, and 300 mg/kg bw, respectively. Administration of CMC-Na, simvastatin, and kerehau ethanol extract was carried out orally along with the inducer. The parameters measured were the levels of triglycerides, TC, and serum HDL at before and after 45 days of treatment. Rat aortic arches were taken for histopathological examination at the end of the study. The results showed that kerehau ethanol extract at a dose of 75 mg/kg bw was able to reduce the TC levels (63.63 ± 11.23), increase the HDL levels (30.47 ± 2.78), reduce the lipid ratios {(Cardiac Risk Ratio) (2.09 ± 0.18) and Atherogenic Coefficient (1.09 ± 0.18)}, and reduce the number of foam cells (16 ± 1.41). It can be concluded that the kerehau ethanol extract at a dose of 75 mg/kgbw has the ability to lower the lipid levels (TC), the lipid ratios, and the number of foam cells.

INTRODUCTION: Atherosclerosis is a chronic arterial disease characterized by fats and other substances gradually built up, creating atheroma and plaque, around the artery walls. In the event of plaque rupture, local thrombosis occurs, leading to partial or total occlusion of the affected arteries. Atherosclerosis is a major cause of vascular disease worldwide. The main clinical manifestations of atherosclerosis include ischemic heart disease, ischemic stroke, and peripheral artery disease 1.

Inflammation and oxidative stress have long been thought to be the key processes that encourage the initiation, development and rupture of athero-sclerotic plaques. Oxidative modification of low-density lipoprotein (LDL) particles is hypothesized to be an important first step in the atherosclerotic process 2.

Statin therapy has been used as a foundation for the prevention of atherosclerosis and its complications for decades. However, although statin's ability to reduce LDL cholesterol has shown considerable success, cardiovascular disease remains the leading cause of death worldwide. Besides, statin therapy causes some side effects, ranging from mild myalgia, rhabdomyolysis, diabetes mellitus, to central nervous system complaints, preventing some patients to be unable to get optimal benefits from the therapy. This finding suggests that other treatments aside from statins are still required 3.

Plant flavonoids with an anti-atherosclerotic activity have received substantial attention in research, and they have also shown to minimize the risk of atherosclerosis in-vitro and in-vivo in different animal models. Flavonoid compounds with their anti-inflammatory and anti-atherogenic properties have also decreased lipid levels. The development of flavonoid-based drugs is believed to have a significant effect on atherosclerosis and their related diseases 4.

Plant Material Collection: The plant parts used in this study were the leaves of kerehau (Callicarpa longifolia Lamk.) found in Muara Muntai of Kutai Kartanegara District in East Kalimantan, Indonesia. To ensure the correctness of the type of plant used, plant identification was carried out in the Laboratory of Plant Anatomy and Systematics, Faculty of Mathematics and Natural Sciences of Mulawarman University, Samarinda.

Preparation of Kerehau Leaf Ethanol Extract: As much as 3 kg of dried kerehau leaves (Callicarpa longifolia Lamk.) were extracted by the maceration method using 96% ethanol solvent (1:5) about three times, 24 h each. The liquid extract was then concentrated using a rotary evaporator at a temperature of 40-45 °C. The thick extract was suspended in 0.5% CMC-Na before use.

Induction Making: This study used induction of high-fat feed and 25% fructose drinking water in order to produce a hyperlipidemic rat model. The high-fat diet consists of a mixture of standard feed (pig pellets), butter (Orchid butter), and quail egg yolks, with a ratio of 80:15:5. The fructose used was High Fructose Syrup (HFS) 55%, which was diluted with distilled water to 25% concentration 7.

Test Animals: This study was conducted at the Veterinary Laboratory of Bandung School of Pharmacy, Bandung, Indonesia. The test animals used were 18 male rats of Wistar strain aged 2-3 months with weights of 150-200 g. The animals were adapted for 7 days, and they were given ad libitum access to food (standard feed) and water in a 12-hour light/12-hour dark cycle.

The procedure for the maintenance and use of the animals in this study was approved by the Research Ethics Commission of Padjajaran University in Bandung (Code of Ethics no. 72/UN6.KEP/EC/2018).

3) Simvastatin: Group with induction and simvastatin suspension at 0.9 mg/kg bw.

Induction was carried out for 45 days. On day 0 and day 46, we examined the levels of triglycerides (TG), total cholesterol (TC), and serum high-density lipoproteins (HDL) in the rats. Afterward, the aortic arches of two rats from each group were taken out.

The organs were stored in 10% Buffered Neutral Formalin (BNF) solution and made histological preparations with hematoxylin and eosin staining. The aortic histology preparations were observed and the number of foam cells in the tunica intima and tunica media per cross-section was calculated. The number of foam cells in all rats in each treatment group was summed and calculated on average. The levels of TG, TC, and HDL were used to calculate the lipid ratios, including Cardiac Risk Ratio, Atherogenic Index, and Atherogenic Coefficient with the following equations 8:

Data Analysis: To test differences in lipid levels and lipid ratios, a one-way ANOVA test was administered in each treatment group. The results of the analysis are significant if p <0.05 at a 95% confidence level.

Activity of Kerehau Leaf Ethanol Extract on Lipid Levels: The activity of the ethanol extract of kerehau leaves on lipid levels was tested by measuring the lipid profiles of the rat serum samples before treatment (T0) and after 45 days of treatment (T46), which included TG, TC, and HDL levels Table 1.

TABLE 1: AVERAGES OF LIPID LEVELS ON T0 AND T46 PERIODS

*Difference is significant when compared to the (+) control group (p<0.05)

#Difference is significant when compared to the Simvastatin group (p<0.05)

As seen in Table 1, the kerehau ethanol extract showed its activity against lipid profiles. The provision of fructose induction at 25% and high-fat diet aimed to obtain a hyperlipidemic rat model. The (+) control group, which was induced by 25% fructose and high-fat diet, increased the TG and TC levels while decreased the HDL levels. Based on the results of the LSD (Least Significant Different) test, there were significant differences (p<0.05) between the lipid levels in the (+) control and (-) control groups after the induction phase for 45 days. This finding indicates that the induction of 25% fructose and high-fat feeding could produce a hyperlipidemic rat model. Several studies have shown that the administration of fructose induction and high-fat diets could raise the levels of TG and TC while declining the levels of HDL.

Triglycerides (TG): Hyper-triglycerides can be associated with two other lipid abnormalities, such as the formation of small dense LDL and HDL reduction 13. The kerehau ethanol extract activity on the average TG levels of the rats is shown in Table 1. The average TG levels in each group increased except for the (-) control group. The simvastatin group and kerehau ethanol extract groups at all three test doses did not show any significant differences (p>0.05) with the (+) control group. This shows that simvastatin and all three test doses of kerehau ethanol extract have not been able to reduce TG levels. In these test groups, however, a significant rise in the TG levels was associated with the fructose induction, as it showed a dominant impact.

Simvastatin is a drug that has been successfully tested for its activity in declining the levels of TC and LDL14; however, clinically, the TG levels often remain high in some CHD patients when cholesterol is highly controlled by statins 15. This is because statins are HMG-CoA reductase inhibitors (enzymatic rate inhibitors that play a role in the synthesis of cholesterol in the liver), whose main benefit is to lower cholesterol rather than triglycerides 16.

High-Density Lipoprotein (HDL): HDL plays an important role in re-transporting cholesterol from peripheral tissues to the liver, making it has an antiatherogenic property. In addition, HDL particles have antioxidant, anti-inflammatory, antithrombotic, and antiapoptotic properties that contribute to inhibiting atherosclerosis 17. The kerehau ethanol extract activity on the average HDL levels of the rats is shown in Table 1.

TABLE 2: AVERAGES OF LIPID RATIOS ON T0 AND T46 PERIODS

*Difference is significant when compared to the (+) control group (p<0.05)

#Difference is significant when compared to the Simvastatin group (p<0.05)

Activity of Kerehau Leaf Ethanol Extract on Aortic Histopathology: Testing the activity of ethanol extract of kerehau leaves on aortic histopathology was conducted by examining and calculating the number of foam cells in the aortic tunica intima and tunica media using a microscope at 400x magnification (ocular 10x, objective 40x). The test results can be seen in Table 3. This study found that the induction of 25% fructose and high-fat feed, comprising a combination of standard feed, butter, and quail egg yolks with a ratio of 80:15:5, were able to enhance the number of foam cells in the rat aortic tunica intima and tunica media. This result was in line with previous studies that reported that the administration of fructose and high-fat diets with similar composition could grow the number of foam cells in the tunica intima and tunica media of the rat aorta 7. Microscopic images in each group can be seen in Fig. 1. 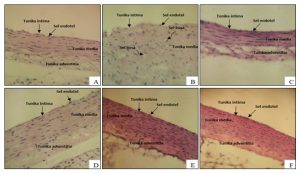 As shown in Fig. 1, the microscopic images of the cross-sectional areas of the rat aorta in the (-) control group illustrate normal endothelial cells with parallel positions on the tunica intima, smooth muscle cells horizontally oriented on the tunica media, and normal collagen and connective tissue appearance at the tunica adventitia. On the other hand, those of the (+) control group outline disorientation of smooth muscle cells and foam cell appearance in the tunica media. The foam cell formation was caused by the macrophages that penetrated the endothelial layer and then accumulated in the tunica intima and tunica media of the arteries.

Under normal conditions, endothelial cells function to maintain vascular homeostasis by preserving a balanced release between vasoconstriction and vasodilation factors as well as prothrombotic and antithrombotic substances that inhibit monocyte adhesion to the endothelial layer which prevents inflammation 22.

In conditions such as hyperlipidemia, hypertension, smoking, aging, and diabetes, endothelial lining can experience dysfunction in which there is an increase in permeability in the endothelial layer leading LDL and other circulating cells such as monocytes/macrophages and T-lymphocytes to enter the endothelial layer. The accumulated LDL can then undergo an oxidation process that produces an oxidized form of LDL. Oxidized LDL shows various damaging effects on vascular cells, including a rise in inflammatory cytokines, chemotactic factors, fibrinolytic regulators, and procoagulant activity. Oxidized LDL also directly elevates oxidative stress in blood vessels. The oxidative stress accelerates the process of atherosclerosis and thrombosis in blood vessels 23.

Research on the isolation of flavonoid compounds in kerehau leaves carried out by Pasaribu et al. 24

CONCLUSION: The ethanol extract of kerehau leaves (Callicarpa longifolia Lamk.) has shown its potentials in improving atherosclerosis by reducing the lipid ratios and improving the histopathological features of aorta in hyperlipidemia induced rats.

ACKNOWLEDGEMENT: The authors wish to to acknowledge the financial support provided by the Riset Internal, Universitas Bhakti Kencana, Bandung, 2019.