Categories Menu
Home » THE EFFECT OF QUINCE PASTE ON MENORRHAGIA: A CLINICAL STUDY

THE EFFECT OF QUINCE PASTE ON MENORRHAGIA: A CLINICAL STUDY

THE EFFECT OF QUINCE PASTE ON MENORRHAGIA: A CLINICAL STUDY

ABSTRACT: Introduction: Menorrhagia that means excessive uterine bleeding is one the most common reasons that women refer to gynecological centers. Despite the use of "Quince paste" in Iranian Traditional Medicine (ITM) clinics, no studies have been done in this regard. Objectives: This study was carried out to investigate the effect of "Quince paste" on uterine bleeding in patients with menorrhagia. Materials and methods: This study was a clinical trial of before-after pilot study conducted on 35 patients aged 18-50 years suffering from menorrhagia. A tea spoonful of "Quince paste" after each meal was prescribed for two months. A pictorial form was completed to determine bleeding volumes and days as well as quality of life questionnaire before and at the end of the intervention. Results: Patients age was 33.8 ± 10.8 years and BMI was 28.94 ± 14.07. Bleeding score decreased significantly after two months of intervention (from 264.2 ± 198.9 to 125.8±155.9), (p<0.001). Quality of life score decreased significantly from 30.28 ± 5.73 to 22.02 ± 3 (p<0.001). Bleeding days decreased significantly in comparison with the baseline because of the treatment (p<0.001). Conclusion: It seems like that "Quince paste" can reduce the volume and duration of bleeding in patients with menorrhagia and improve their quality of life. It seems that “Quince paste” could be introduced as a treatment for menorrhagia based on ITM.

INTRODUCTION: Menorrhagia means excessive bleeding (more than 80 ml of blood) or bleeding or along term (more than or equal to 8 days) that occurs at regular intervals 1. Menorrhagia is one of the most common gynaecological problems the occurrence of which increases with age. More than 30% of women of child bearing age and 60% of the total women population experience it. This disorder totally forms 12% of the reason for referral to gynecologists.

Menorrhagia is the most common cause of iron deficiency anemia in women and is responsible for 25 % of the gynaecologic surgeries. Eighty percent of the women who are under treatment for menorrhagia have no anatomical problems and in more than half of them with menorrhagia, no obvious cause can be found 2.

There all cause of menorrhagia is unknown although recent studies have reported fibrinolysis and imbalance of prostaglandins as the cause of excessive uterine bleeding 3, 4. Routine treatment so of menorrhagia include oral contraceptives with estrogen or progesterone alone, gonadotropin-releasing hormone agonists, anti-fibrinolytics, non-steroidalanti-inflammatory drugs such as mefena-mic acid and desmopressin 5. Surgical treatments include endometrial ablation and hysterectomy 6.

Each of these treatments may have side effects. For example, NSAIDs lead to gastro intestinal complications, stomach bleeding, diarrhea, headache and liver toxicity. Oral contraceptives cause menstrual disorders, weight gain, nausea, changes in sexual behavior, breast pain, vaginal discharge changes, dizziness, headache, acne and moods wings 7. Hysterectomy surgery is a major surgery and is considered as the certain cure of severe menstrual bleeding which is sometimes unnecessary and may lead to many complications for patients 2.

In recent years, the use of traditional medicines has become popular 8 and the global medical community has figured out the importance of natural methods as well as traditional and complementary medicine schools. The development of traditional Chinese medicine, chiropractic, Ayurveda and hundreds of different schools and approaches are flect the global movement 9. In Iran, many people and health professional stand to use natural treatments because of the ireffectiveness, safety and less side effects than chemical drugs 10.

Moreover, "Quince" has a healing effect on skin ulcers, decrease of nausea, decrease of saliva secretion, lowers blood glucose and has an antioxidant effect 14. Regarding the high prevalence of menorrhagia, the severity of its complications and its role in quality of life of women, the importance of early treatment with low complications, the use of" Quince paste" in traditional medicine clinics and lack of clinical studies in this regard, this research was conducted to examine the effect of "Quince paste" on uterine bleeding in patients with menorrhagia.

Preparation of "Quince Paste": Quince was purchased from local market, Isfahan, Iran. First, the Quince juice was prepared, filtered and boiled until its volume reduced to one-fifth. Next, 3 % sugar was added and it became thick and consistent 15. The prepared "Quince paste" was packed in 450-gram containers to be consumed by patients for one month. Each patient took a tea spoonful of the prepared "Quince paste" every day after every meal for two months.

Study Design: This is a clinical trial of before-after pilot study carried out to assess the efficacy of "Quince paste" in the treatment of menorrhagia. The study was approved by the Ethics Committee of Shahid Beheshti University of Medical Sciences and Health Services (Certification No. IR. SBMU. RETECH. REC. 1395. 375) and was registered in Iran Clinical Trials (IRCT) No. IRCT 201610262 1937N2. Written consent was taken consciously from all patients before they entering the study.

Research Population: Participants in the study were premenopausal patients with menorrhagia aged 18 - 50 years who referred to the midwifery office in Ahwaz, Iran with a history of regular menstrual cycles and excessive menstrual bleeding in two consecutive cycles. Exclusion criteria included: Irregular menstrual periods or bleeding between menstruations, uterine fibroids larger than 3 cm and other pathological or iatrogenic disorders for abnormal bleeding, systemic diseases affecting menstrual bleeding, taking any hormones or drugs that affect menstrual bleeding, having an IUD, pregnancy and hemoglobin below 10.

Evaluation of Uterine Bleeding: Uterine bleeding was evaluated by using pictorial blood assessment chart (PBAC) that was an objective assessment tool. Bleedings core in PBAC is 0-500. Higher score means severe bleeding. PBAC score higher that 100, which is equal to 80 ml bleeding, is considered as menorrhagia 16. PBAC chart has the sensitivity of 86 % and the specificity of 89 % in the diagnosis of menorrhagia 17. At the beginning of the study, the PBAC chart was given to the patients and they were asked to fill it during the period (in the first cycle without taking any medication and in these cond and third cycles while taking "Quince paste").

Moreover, in order to assess the patients 'quality of life, quality of life questionnaire in patients with menorrhagia (Iranian version MQ) 18 was used at the beginning and end of the study.

Treatment: Patients received a tea spoonful of "Quince paste" three times a day after every meal during two months. Forty five patients were enrolled in the study. Patients were free to quit the study when ever they wanted. Patients were not allowed to take hormonal drugs or other drugs to reduce bleeding.

Statistic Analysis Statistical analysis was carried out using the SPSS version 21. Quantitative variables were expressed by mean and standard deviation and qualitative variables by quantity and percentage. Repeated measures were evaluated by analysis of variance test and paired t-test. 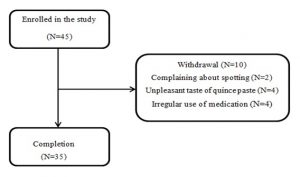 TABLE 2: CHANGES IN THE SCORE OFPBAC, PERIOD DURATION AND QUESTIONNAIRE (MQ) DURING THE STUDY

The days of bleeding reduced from 7.8 ± 2.6 at the beginning of the study to 5.8 ± 1.8 in the first month of taking the drug and to 5.9 ± 1.7 in these cond month of taking the drug and reduced as much as 24.3% in comparison to the base line (p<0.001). Comparison of repeated results with ANOVA test showed that the score of PBAC, quality of life questionnaire (MQ) and duration of menstrual bleeding in patients decreased significantly (p<0.001). Table 2 compares the results of the study with the base line.

Since one of the factors contributing to menorrhagia is the high concentration of prostaglandins, especially prostaglandin F2α21, the presence of flavonoids in "Quince" leads to the reduction of menorrhagia 14. One of the causes of abnormal uterine bleeding is inflammatory reactions in the endometrium.  The migration of leukocytes causes micro-erosion in the surface epithelium of endometrium and this inflammation is known as the cause of abnormal bleeding. Leukocytes, inflammatory macrophages and NK cells secrete inflammatory vasodilators and cause damage to the structure of vascular endothelial and bleeding 22 - 24.

"Quince" fruit includes phenolic compounds such as chlorogenic acid with antioxidant and anti-inflammatory effect 25, 26. This combination can cause the reduction of swelling and inflammation, reduction of neutrophils migration and incidence of inflammatory mediators 27. Moreover, The inhibitory effects of flavonoids on mast cells, Band T cells, interferon, NK cells, basophils, neutrophils and free radicals are known 28,  29.

Therefore, "Quince" may reduce uterine bleeding by inhibitory effect on inflammatory cells and mediators. Despite using "Quince paste" in the treatment of menorrhagia in Iranian traditional medicine, no study has been carried outs of are to evaluate how "Quince paste" affects menorrhagia. However, several studies have been conducted to investigate the effect of herbal medicines on uterine bleeding.

In the study conducted by Memarzadeh et al., the effect of Persian Gulnaron menorrhagia due to uterine leiomyoma was investigated in which the reduction of bleeding volume and days and the improvement of patients 'quality of life were observed 18. The results were similar to the findings of this study. In the study carried out by Qaraaty et al., the duration of bleeding and the number of pads used as well as the quality of life score decreased in patients with abnormal uterine bleeding through the prescription of "Myrtle syrup" 30. In Qaraaty's study, "Myrtle syrup" was taken 7 days every month, but in this study, "Quince paste" was taken for the entire month. Given that in ITM sources "Quince" not only strengthens uterus, but also is tonic for heart, brain and liver, its prescription during the month can strengthen these organs and can be effective in removing uterine bleeding 31.

Furthermore, "Quince" is a drug while "paste" is a food in people's food basket. In the study carried out by Rahi et al., taking "Quince pills" for five days since the beginning of menstruation reduced menorrhagia score and increased hemoglobin in patients, as much as mefenamic acid 32. In the present study, hemoglobin was not measured at the end of the research and thus its measurement should be considered in future studies. "Quince" is used as a fruit by people and thus there is no contraindication for its use. Using "Quince paste" which is the condensed form of "Quince juice" reduces the dosage of the drug.

In addition, "Quince paste" is a food product and is more readily accepted by patients than "Quince pill" that is a drug form. According to ITM, "Quince paste" is not contraindicated in pregnancy and even can be administered in the treatment of bleeding during pregnancy. The limitations of this study were the short course of treatment and lack of control group for comparison.

CONCLUSION: It seems that "Quince paste" can reduce the volume and duration of bleeding in patients with menorrhagia and improve their quality of life and could be introduced as a good choice for menorrhagia.