INTRODUCTION: Carbamazepine (CBZ) is one of the commonly used conventional antiepileptic drugs. CBZ has a considerable low therapeutic index and a wide inter-individual variation at tolerable doses which make therapeutic drug monitoring necessary 1, 2. Also, CBZ is a potent enzyme inducer and is a subject to auto-induction. Those properties make CBZ prone to interactions with the co-administered drug, herbal products, and food.

Drug interactions are classified into pharmacodynamic and pharmacokinetic types 3-5. The variability in drug pharmacokinetic is responsible for the lack of a consistent relationship between dose given of the drug and its concentration at the site of action 6. Herb-drug interactions are mostly pharmacokinetic. Fluctuations in the bioavailability of drug and herb molecules in the body can result from changes in absorption, distribution, metabolism, and elimination. Induction or inhibition of hepatic and intestinal drug-metabolizing enzymes, e.g. CYP450 and drug transporters such as P-glycoprotein were suggested as possible mechanisms 7, 8.

The consumption of herbal products for a variety of health-related problems has steadily increased over the past few years 9, 10.

Valerian (VAL) is a popular herbal product often used to treat insomnia and anxiety. It is the most common non-prescription sedative used in Europe 11, 12. CBZ-herb interactions were an interesting and important issue for many researchers 13. Possible pharmacokinetic VAL-CBZ interactions are still uninvestigated. The present study aims to examine the effect of VAL on PK of CBZ in healthy rabbits.

Animals: Five healthy male rabbits (weight: 3.26 ± 0.11 Kg, age: 7-9 months were enrolled in the study. The rabbits were obtained from Asdda for animal production and welfare center, where follow up care and clinical examination was performed, and rabbits’ health state was certified (khanunis, Palestine). Rabbits fasted for 12 hours with free access to water by ad libitum before the beginning of the study. The study was carried out at Al-Azhar University-Gaza, College of Pharmacy, Gaza, Palestine. The study was approved by the institutional ethics committee and was conducted under the supervision of a veterinary physician.

Study Design: A single dose, two-crossover design study was conducted in rabbits. The rabbits were divided into two groups. The first one received a volume equivalent to 100 mg CBZ from an oral suspension 2% (Tegretol, Novartis), whereas the second group received the same volume of CBZ suspension in combination with a volume of prepared in laboratory suspension equivalent to 25 mg valerian dry extract. It was prepared by pulverizing five tablets of commercial valerian film-coated tablets (Relaxing, Laboratoires Pharmaceutiques Trenker). Each tablet contains 500 mg of dry valerian extract. Weight of the powder equivalent to 0.5 g VAL dry extract was suspended in 20 ml distilled water. After one week the second group received CBZ suspension alone and the first received CBZ suspension in combination with VAL to complete the cross-over design. Carbamazepine oral suspension and valerian tablets were purchased from a local pharmacy (Gaza, Palestine). The dose was given orally by gavage to each rabbit. It was put in the corner of the mouth and the suspension was pushed down slowly, to avoid choking. General clinical safety was assessed by physical examination during the study, washout period and at the end of the study.

Blood Sampling: Rabbits were placed in rabbit restraining box device. The marginal ear vein was located, and the hair was removed. Gentle stroking and tapping of the ear may make the vein more visible. Local anesthetic was applied to prevent the jerking of the rabbit as a result of venipuncture 15 minutes before starting the study. Inserting a small needle (23 gauge) butterfly attached to a syringe in the marginal ear vein 14. Serial venous blood samples were collected (ca 0.7 ml) in vacutainer tubes according to the time schedule 0.0, 0.5, 1.0, 1.5, 2.0, 2.5, 3.0, 4.0, 5.0, 6.0 and 24.0 h after receiving the dose. Blood samples were centrifuged at 3,000 rpm for 5 minutes, and serum was transferred into clean plastic tubes.  Serum samples (ca. 200 µl) were kept in the refrigerator until being analyzed within 24 h.

Pharmacokinetic Analysis: The plasma pharmacokinetic parameters were estimated, which included the observed maximum plasma concentration Cmax, the time to reach Cmax, (Tmax) and the area under the plasma concentration-time curve from 0 hours to last measurable concentration (AUC0-t) and 0 hours to infinity (AUC0-∞). The Cmax and Tmax were directly determined from the serum concentration versus time curves. The Area under the curve from 0 hours to t (AUC0-t) was calculated by the linear trapezoidal rule. The area under the curve from 0 hours to infinity (AUC0-∞) was estimated by summing the area from AUC0-t and AUC0-∞, where AUC0-∞ = AUC0-t + Ct / ke, with ‘Ct’ defined as the last measured serum concentration at time t, and ke is the elimination rate constant. The elimination rate constant ke was estimated by the least squares regression of plasma concentration-time data points lying in the terminal region by using semilogaritmic dependence that corresponds to first-order kinetics. The half-life t1/2 was calculated as 0.693/ke. Pharmacokinetic analysis was performed using model-independent method (Non-Compartmental Approach) WinNonlin Professional Software (Version 6.3, Pharsight Corporation, Cary, NC).

Statistical Analysis: Analysis of Variance (ANOVA) was used to compare the calculated pharmacokinetic parameters of CBZ alone or with VAL, using general linear model procedures, in which sources of variation were subject and period. The statistical analysis was performed using SPSS, version 16. A statistically significant difference was considered when P ≤ 0.05.

RESULTS AND DISCUSSION: Carbamazepine (CBZ) is a first-line antiepileptic drug which may be prone to drug interactions. Serious herb-carbamazepine interactions with clinical evidence were reported. The majority were pharmacokinetic-based 13.

In this study, the effect of VAL on PK of CBZ was investigated using rabbits. The mean plasma concentrations of CBZ when administered alone or in combination with VAL are shown in Fig. 1. 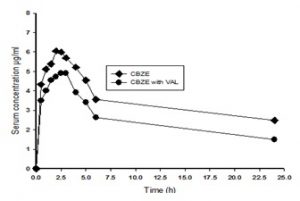 FIG. 1: THE MEAN RABBIT SERUM CONCENTRATION-TIME PROFILE OF CBZ WHEN ADMINISTERED ALONE AND IN COMBINATION WITH VAL (n = 5)

The concentration-time profile in both cases indicated that they were comparable. The mean Cmax was 6.52 ± 1.6 µg/ml versus  5.32 ± 1.4 µg/ml, and tmax was 2.6 ± 0.9 h versus 3.3 ± 0.9 h, of CBZ after alone and concomitant administration of CBZ with VAL, respectively Table 1. VAL has not changed the absorption phase of CBZ. Some herbal products increased absorption of poor water-soluble CBZ - through enhancement of dissolution or altering gastric emptying rate 15, 16. Psyllium, septilin, and soya bean decreased bioavailability and plasma level of CBZ by affecting its gastric absorption 17-19.

By comparing the rest PK parameters, statistically insignificant differences were found in Table 1. The elimination of CBZ was not affected by VAL; Ke and t1/2 were not changed when VAL was co-administered significantly. CYP3A4 is the most important enzyme involved in the metabolism of CBZ as it leads to the formation of the active metabolite CBZ 10,11-epoxide, which appears to contribute to the toxicity and efficacy of CBZ 20, 21. CYP3A6 is responsible for CBZ metabolism in the rabbit 22.  The rabbit CYP3A6 and human CYP3A4 isoform have similar p-450 predominance, and substrate specificity, and both are induced by rifampicin 23.

CYP3A4 is the most important isoform of CYP450 in critical tissues, such as hepatic and gastrointestinal tract. This enzyme is involved in the biotransformation of over 70% of the drugs in use today; hence, the possible risk of adverse events due to alterations in this pathway is high 7.

TABLE 1: SUMMARY OF MEAN PHARMACOKINETIC PARAMETERS OF CBZ 100 MG WITH AND WITHOUT VAL 25 MG (n=5)

Extracts from the valerian root have been shown to inhibit CYP3A4 activity in vitro 27-29. The effects of valerian on co-administered medications in vivo appear to be less significant than those observed in vitro. Studies designed to probe in-vivo drug interactions between valerian and substrates for CYP3A4 or CYP2D6 have come back negative. Minimal effects on CYP3A4 activity and no effect on CYP2D6 activity were reported following 14 days of valerian administration (1 gram/day) 30. Similar results were found in volunteers for a variety of probe substrate relating to CYP450 3A4, 1A2, 2E1, and 2D6 following administration of valerian for a month. The results showed that valerian is unlikely to cause pharmacokinetic interaction mediated by major CYP450 enzymes 31.

The absorption and elimination phases of CBZ were not affected by co-administration of VAL; therefore, the bioavailability; area under the curve AUC, of CBZ was not changed significantly by VAL. Changes in the bioavailability of CBZ were reported with unknown mechanisms 13. The utility of animals to study drug-herb interactions is well documented 7, 32. Pharmacokinetic of a drug showed not be modified by repeated blood withdrawal from the same rabbit 33. All five rabbits had completed the study, and there were no death or replacement during the study. Clinical physical examination during and post-study indicated no abnormalities. The present study showed good tolerability at the given doses for CBZ and VAL.

CONCLUSION: Despite the widespread of herbal medicines documented herb-drug interactions are few. The result of the study indicated that valerian had not altered PK parameters of CBZ in rabbits. CBZ can be used safely with VAL preparations.

ACKNOWLEDGMENT:  The author would like to thank Mr. Mohammed Abuaffash, the director of Medical Relief Society-Gaza for providing the analysis facility and for Dr. Ali Abuzaid for his consultation about statistical analysis.