THE EFFICACY OF CUCURBITANE TYPE TRITERPENOIDS, GLYCOSIDES AND PHENOLIC COMPOUNDS ISOLATED FROM MOMORDICA CHARANTIA: A REVIEW

THE EFFICACY OF CUCURBITANE TYPE TRITERPENOIDS, GLYCOSIDES AND PHENOLIC COMPOUNDS ISOLATED FROM MOMORDICA CHARANTIA: A REVIEW

Momordica charantia Linn. which has been used mainly for edible purposes at different countries of the world including South East Asia and has also been extensively used in traditional medicines for the cure of various ailments. M. charantia belongs to the cucurbitaceae family. Extensive research has been carried out on the fruit, leaves, and seeds of the plant. Most importantly, all these research works have shown its efficacy on various cancer cell lines like lymphoid leukemia, lymphoma, choriocarcinoma, melanoma, breast cancer, skin tumor, prostatic cancer, squamous carcinoma of tongue and larynx, human bladder carcinomas and  on Hodgkin’s disease. Clinical reports of some research on the use of M. charantia in diabetes and cancer patients showed promising results. The main active constituents of M. charantia are cucurbitane type triterpenoids which have some potent biological and pharmacological activities including antidiabetic, anti-obesity, anticancer, anti-HIV, anti-feedant and anti-oviposition activities. Since in the early 1960’s the constituents of M. charantia have been investigated and several classes of secondary metabolites including cucurbitane-type triterpenoids, glycosides and phenolic compounds have been isolated and their structures were determined. This review summarizes the previous and current information regarding phytochemical constituents of M. charantia and their pharmacological effects that provide the scope for future research in this aspect.

INTRODUCTION: Plants and herb preparation have been traditionally use for the cure of various ailments from ancient times and even today all over the world, 80% of the population continues to use traditional medicine for primary health care. In the past decade, therefore, research has been conduct on scientific evaluation of traditional drugs of plant origin. Momordica charantia is one such plant that has been frequently used as medicine from time immemorial 1, 2.

Momordica charantia, a climber belonging to family Cucurbitaceae, is commonly known as bitter gourd or bitter melon in English and karela in Bengali. Momordica means, to bite (referring to the jagged edges of the leaf, which appear as if they have been bitten). All parts of the plant, including the fruit have bitter taste. The fruit is oblong and resembles a small cucumber; young fruit is emerald green that turns to orange-yellow when ripe. It is an herb, grows in tropical areas of Asia, Amazon, East Africa, and the Caribbean and cultivated throughout the world for its use as vegetable as well as folk medicine.

The plant has been used traditionally as medicine in developing countries like Brazil, Bangladesh, China, Colombia, Cuba, Ghana, Haiti, India Mexico, Malaya, New Zealand, Nicaragua, Panama and Peru. Some of its common uses in the above countries are for diabetes, as a carminative and in the treatment of colics 3-5. Topically it is used for treatment of wounds, internally as well as externally for management of worms and parasites. It is also used as emmenagogue, antiviral for measles and hepatitis. In Turkish folk medicine, mature fruits of M. charantia are used externally for rapid healing of wounds and internally for treatment of peptic ulcers 5.

In Bangladesh, various medicinal properties are claimed for M. charantia that include antidiabetic, abortifacient, anthelmintic, contraceptive, antimalarial and laxative and is used for treatment of dysmenorrhea, eczema, emmenagogue, galactagogue, gout, jaundice, kidney (stone), leprosy, leucorrhea, piles, pneumonia, psoriasis, rheumatism and scabies. However, it is commonly consumed as vegetable 6.

During the last few decades tremendous research work has been carried out with M. charantia extract to see the antidiabetic, antiviral, antitumor, antileukemic, antibacterial, antihelmentic, antimutagenic, antimycobacterial, antioxidant, antiulcer, anti-inflammatory activities along with hypo- cholesterolemic, hypo-triglyceridemic, hypo- tensive, immunostimulant, and insecticidal properties 6-8. This review aims to highlight the main phytochemical constituents of M. charantia with their biological properties which support for future research on this plant.

Phytochemistry: The reported data showed that cucurbitane type triterpenoids are the main and common phytochemicals present in the Momordica charantia. More than 50 cucurbitacins so far have been isolated from this plant together with glycosides, saponins, alkaloids, fixed oils, proteins, steroids, flavonoids and phenolic compounds. Research has found that the leaves are nutritious sources of calcium, magnesium, potassium, phosphorus and iron; both the edible fruit and the leaves are great sources of the vitamins A, C and B 3, 8-9. 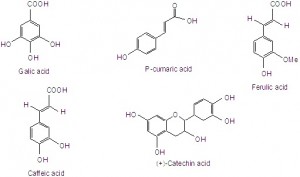 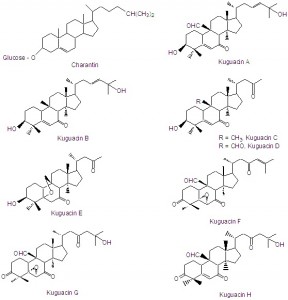 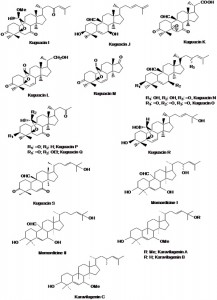 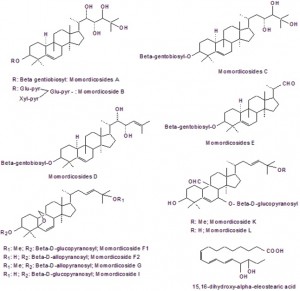 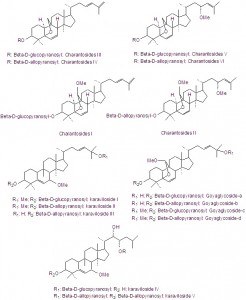 Miscellaneous: The essential oil obtained from the seeds of M. charantia was analyzed by GC/MS. Twenty-five components, representing 90.9% of the oil, were identified and among them trans-nerolidol, apiole, cis-dihydrocarveol and germacrene D were the main constituents 31. Trypsin inhibitors e.g. MCTI-II’ and BGIT 32, elastase inhibitors 33, guanylate cyclase inhibitors 34 and α-glucosidase inhibitor e.g. D-(+)-Trehalose 35 are reported. Moreover, HIV inhibitory proteins like MRK29 (MW: 28.6 KDa) and MAP30 (MW: 30,000 KDa) and lectin were also documented 36. α-eleostearic acid and its dihydroxy derivative, strongly inhibited the growth of cancer and fibroblast cell lines like HL60 leukemia and HT29 colon carcinoma, were also isolated from M. charantia 37.

Antibacterial and antifungal activity: Clinically and experimentally, leaf extracts (Methanol, Ethanol and aqueous) of M. charantia have demonstrated a broad spectrum antimicrobial activity 56. Meanwhile, essential oil of the seed of M. charantia showed antibacterial and antifungal activities may due to the presence of trans-nerolidol (61.6% of the total oil) 31.

Antiviral activity: Cunnick et al., 57 clinically and experimentally demonstrated that the leaf extract of M. charantia have the ability to increase resistance against viral infections and to provide immunostimulant effects. Several isolated phytochemicals, e.g. α and β-momorcharin, lectin, MRK 29 and MAP 30, have been documented to have in vitro antiviral activity against Epstein-Barr, herpes, HIV, coxsackievirus B3 and polio-viruses and among them MAP 30 have promising anti HIV activity 58-59.

Immunomodulatory activity: M. charantia extracts and its isolated constituents have a variable effect on the immune system. It has been shown to be immune stimulating in some studies and immunosuppressive in some conditions (allograpft rejection) 75. α- and β-momorcharin showed immunosuppressive activity via lymphocytotoxicity or to a shift in the kinetic parameters of the immune response76. However, its immunostimulant activity has been attributed to increase the interferon production and natural killer cell activity 57.

Antiobesity: M. charantia and its isolated compounds increase the activity of adenosine-5-monophosphate kinase (AMPK), an enzyme that facilitates cellular glucose uptake and fatty acid oxidation. Hypoglycemic agents in M. charantia promote efficient oxidation of glucose into fuel, and conversion into starch. (Glycogen or animal starch is stored in the liver and muscle cells). During glucose shortages, fats/fatty acids are used as fuel. Continued demand for energy in the absence or shortage of glucose causes fat cells to release their fat contents to maintain energy balance. This increased fatty acid oxidation eventually leads to weight loss 81.

Toxicity and Drug interaction: The seed contains vicine and therefore can trigger symptoms of favism in susceptible individuals. In addition, the red arils of the seeds are reported to be toxic to children. Many in vivo clinical studies have demonstrated the relatively low toxicity of all parts of the M. charantia plant when ingested orally. Pregnant women should not eat bitter melon as it stimulates the uterus and may cause premature birth 82.

CONCLUSION: Recent years, ethno-botanical and traditional uses of natural compounds, especially of plant origin received much attention as they are well tested for their efficacy and generally believed to be safe for human use. It is the best classical approach on searching new molecules for management of various diseases. Thorough screening of literature available on Momordica charantia depicted the fact that it is a popular remedy among the various ethnic groups, Ayurvedic and traditional practitioners for the treatment of various ailments. Today, evidence based studies are needed to establish these facts so that these wonder drugs with lot of therapeutic activities can be traditionally use safely (excluding the toxic components) to cure the various diseases of suffering humanity with high efficacy and least side effects. Like M. charantia lot of other medicinal plants are available and the time is coming to explore the efficacy and best use of such effective  secondary plant metabolites which reduce the use of synthetic modern medicine having severe side effects.