THE IN-VIVO EFFECTS OF PARTIALLY PURIFIED SUB-FRACTION (TAF2) OF THE CRUDE METHANOLIC EXTRACT OF EURYCOMA LONGIFOLIA ROOTS ON THE HAEMATOLOGICAL, BIOCHEMICAL AND HISTOLOGY PARAMETERS

THE IN-VIVO EFFECTS OF PARTIALLY PURIFIED SUB-FRACTION (TAF2) OF THE CRUDE METHANOLIC EXTRACT OF EURYCOMA LONGIFOLIA ROOTS ON THE HAEMATOLOGICAL, BIOCHEMICAL AND HISTOLOGY PARAMETERS

Eurycoma longifolia (E. longifolia) Jack has been widely used in traditional medicine for its antimalarial, aphrodisiac, anti-diabetic, antimicrobial, anti-pyretic and anticancer activities. As yet, no study has been done on biosafety of partially purified sub-fraction (TAF2) of the crude methanolic extract of E. longifolia roots. This study aims to evaluate, in vivo, the effects of TAF2 on the haematological, biochemical and histology parameters in nude mice. Male nude mice were treated orally with TAF2 (200 mg/Kg/mouse) every other day for 16 days. Untreated mice were used as controls.  Blood samples were collected by intra-cardiac puncture and haematological and biochemical parameters were analyzed by using animal blood counter and automated chemistry analyzer, respectively. Hematoxylin-eosin stain (H&E) was used to evaluate the histopathology changes. Blood cells morphology was assessed by Wright stain of the thin blood films. The results showed normal blood haematology and clinical chemistry. Histological examination of TAF2 treated vital organs (kidney, liver and spleen) of mice showed no apparent change with the dose used. In conclusion, E. longifolia root methanolicextract is safe on short-term exposur.

INTRODUCTION: Natural products are considered the most consistent and successful source of drugs. It has been reported that about 3.5 to 4 billion (80 %) of people in the world especially in developing countries depend on traditional medicine for their primary health care 1, 2. About 60 to 75 % of the new approved drugs were of natural origin. These include original natural products, products derived semisynthetically from natural products, and synthetic products based on natural product models 3, 4.

The process of drug development encompasses the discovery, preclinical and clinical phases and it has been estimated that only 1 of 10,000 chemicals that enter the discovery process can reach the market 5.

To determine the success of drug development, two major issues to be considered, drug efficacy and toxicity. About 40% and 89% of newly chemical entities (NCEs) that reach the phase of preclinical and clinical trial respectively fail due to its toxicity effects 6.

Eurycoma longifolia Jack (Tongkat Ali) is a slender, evergreen flowering tree from the Simaroubaceae family commonly found in Southeast Asia 7.  The plant is rich in various bioactive compounds, such as eurycomanole 8, eurycomanone, eurycomalactone, 13α (21)-epoxyeurycomanone, 9-methoxycanthin-6-one, canthin-one alkaloids, β-carboline alkaloids, squalene derivatives, biphenylneolignans, 14, 15 β-dihydroxyklaineanone and tirucallane-type triterpenes 9. This plant has been used widely in traditional healing in South East Asia for treatment of various disease among them malaria, schistosomiasis, diarrhea, diabetes and infections. It has also been used as a tonic, energy enhancer, and as an aphrodisiac. The anticancer activities of E. longifolia on various tumors, including lung 10, breast 11 and cervical cancers 12 have been reported. However studies on the safety of TAF2 have never been reported.

This study is aimed to evaluate, in vivo, the biosafety of TAF2 of the crude methanolic extract of E. longifolia roots.

Plant material: The plant and root samples of E. longifolia Jack were identified by Professor Ahmad Latif from Universiti Kebangsaan Malaysia (UKM). The plant samples were collected in 2003 from Perak, Malaysia. A voucher specimen (No. 785-117) was deposited in Penang Botanical Garden, Penang, Malaysia.

The partially purified sub-fraction (TAF2) was derived from resin chromatography of the crude methanolic extract of E. longifolia roots as previously reported by Teh, (2010) 13.

Before the treatment, TAF2 was dissolved in water and sterilized via the filtration method.

Experimental animals: Male Balb/c nude mice were purchased from BioLASCO Taiwan and acclimatized in a pathogen-free animal facility for 2 weeks before use. Animals were provided with sterile food and water and housed under a standardized 12 h: 12 h light/ dark cycle at room temperature of 24 ± 2°C and a humidity of 60 ± 10%.

Fourteen mice (8 weeks old, 20 ± 2 g) were divided into two groups (control and treated). Each group consists of 7 mice. Mice in treated group were given TAF2 (200 mg/Kg/mouse) via oral gavage every other day for 16 days while mice in control group received only normal saline. The study protocol was approved by Animal Ethics Committee, Universiti Sains Malaysia (USM).

Histological Assessment: Mice were authenticated by cervical dislocation and subsequently, liver, spleen and kidneys were collected from each mouse and fixed with 10 % buffered formalin. Paraffin blocks were prepared and sections of 5µm were cut on a microtome (Accu-Cut® SRMTM, SAKURA) and stained with hematoxylin and eosin. The tissue sections were examined and compared with negative controls.

Haematological Parameters Assessment: As shown in table 1 and fig. 1, blood tests do not suggest any systemic changes and the haematological response to treatment with 200 mg/ml was normal. The difference between various blood counts in the treated and control groups was not significant (P >0.5). Thin blood films show normal morphology of the red blood cells, white blood cells and platelets.

TABLE 1. HAEMATOLOGY RESULTS OF NUDE MICE AFTER ORAL ADMINISTRATION OF 200 mg/kg OF TAF2. SAMPLED AFTER 16 DAYS

FIG. 1. BLOOD CELLS MORPHOLOGY. WRIGHT STAINED BLOOD FILM FROM THE CONTROL MICE (A) AND TAF2-TREADED MICE (B) AFTER 16 DAYS.

Biochemical Parameters Assessment: Biochemical response to treatment with TAF2 (200 mg/kg) showed a non-significant differences when compared controls. The ALT and AST levels were noted to be slightly increased; however, this increase was not statistically significant (P > 0.05).

DISCUSSION: Experimental screening methods are important in order to evaluate the safety of natural products 14. E. longifolia has several significant biological activities and chemical compounds 15. Many products from E. longifolia are currently available in the market. Among these products are Tongkat Ali root powder, LJ100 extract, Passion Rx natural sex booster and Prostate Power Rx 16. The reputation of E. longifolia products rose from the traditional use of the different parts of this plant. 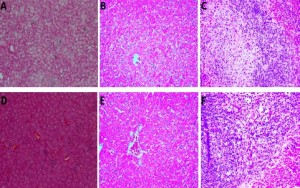 FIG. 2.  COMPARATIVE HISTOLOGY OF KIDNEY, LIVER, AND PANCREAS FROM CONTROL MICE (A, B AND C RESPECTIVELY) AND FROM TAF2-TREATED MICE (D, E AND F RESPECTIVELY). Histologic specimens of mice tissues were collected from authenticated mice after 16 days of treatment. Tissue samples were stained with hematoxylin and eosin (H and E). The histological pictures were taken at following magnifications: A & D at 20x; B, C, E & F at 40x

This study was conducted to scientifically evaluate the biosafety of partially purified sub-fraction (TAF2) of E. longifolia root methanolic extract. The results clearly showed that oral administration of TAF2 is safe at the dose used (200 mg/Kg) in nude mice. The safety is indicated by the non-significant changes in both biochemical and haematological parameters in treated mice as compared with controls. Blood films from the treated mice also showed normal morphology of blood cells.

Histological examination of the vital organs including liver, spleen and kidneys from treated mice showed no apparent histological changes indicating evidence of biosafety at the dose 200 mg/Kg, administered orally. Biosafety of treatment with TAF2 was also indicated by the absence of any sign of behaviour changes. These findings also correlate with reduced cytotoxcity of TAF2 on normal peripheral blood mononuclear cells (IC50 was 180 µg/ml) as assessed in vitro using MTS assay (unpublished data). Nurkhasanah and Azimahtol, (2008) reported that eurycomanone, isolated from E. longifolia root extract, has less toxic effect of on the normal cells lines (MDBK and Vero) 12.

These results also correlated with that reported by Bhat and Karim (2010) where it was shown that an oral administration of 270 -350 mg/kg of E. longifolia root extract has no toxic effect 15.

In conclusion, short term oral administration E. longifolia root extract is safe as indicated by the absence of toxic effects in nude mice.

AKNOWLEDGEMENT: This work was supported by the Short Term Grant, Universiti Sains Malaysia (USM). Grant number is 304/CIPPT/6311016. The authors would like to thank Dr. Nor Aini Saidin, Dr. Nor Azlina Khalil and other members of IPPT animal house for their assistance. Authors also would like to thank Associate Professor Mohammed Al-Tikriti, from Western University of Health Sciences, USA and Dr. Othman Bin Abdullah from Department of Pathology, Sultan Abdul Halim Hospital, Malaysia, for their assistance in the interpretation of the histopathology slides.