ABSTRACT: Over the counter (OTC) drugs are drugs easily available without the prescription of a registered medical practitioner (RMP) and self-mediation practices of these drugs are very common in medical students especially in diarrhea which mostly requires dehydration therapy only. But very few reports are available regarding the use of OTC antidiarrhoeal drugs. The aim of the study was designed to assess the practice of self-medication for diarrhea among second year medical students in RIMS, Ranchi, Jharkhand. This was a cross sectional study conducted among medical students in March-April 2017. Data was collected through self-administered questionnaire and result was expressed as percentage frequency. Questionnaires were filled completely by 224 students out of 269. 81.48% males and 85.07% females were practicing self-medication. Books were the major source of information about drugs and mild nature of illness was the main cause of self-medication practice. The most common drug group used for diarrhea was oral rehydration salt (ORS) and about 41.07% have used self-medication once in past 6 months. In 75% cases diarrhea was food associated. 41% of the students were against the practice of self-medication. Our study showed that self-medication is widely practiced among medical students and mild nature of illness was the main cause. Educating these medical students regarding the advantages and disadvantages of self-medication is necessary to create awareness among them.

INTRODUCTION: Over the counter (OTC) drugs are medicines sold directly to a consumer without a prescription by a health care professional as compared to prescription drugs which should be sold to consumers possessing a valid prescription. The use of OTC drugs has steadily increased in the global and Indian pharmaceutical market. The availability of OTC medications makes it possible for consumers to treat numerous ailments without the supervision of health care professionals.

While OTC drugs have their own benefits such as self-medication, they also bring with it several disadvantages such as misdiagnosis, overdose and drug interactions 1.

Self-medication is a prominent feature of health care today. It may be defined as the management of a minor ailment using a pharmaceutical product that is available without a prescription 2. It is selection and use of medicines by individuals to treat self-recognized or self-diagnosed condition or symptom 3. Self-medication also involves getting medicines without a prescription, resubmitting old prescription to buy medicines, telling about medicines to friends or relatives or using left over medicines started at home 4. It is the use of any medicine for self-treatment of any health problem without consultation of a certified physician.

It is a widely prevailing practice especially more common among health care students. It can give grave consequences because it may influence their professional decisions 5. Self-medication is common among practicing physicians also. The self-medication practice among doctors develops during their undergraduate training 6. Acute diarrhea in adults is a common problem encountered by family physicians. Diarrheal illness accounts for 2.5 million deaths per year worldwide. In the developing world, infectious causes of acute diarrhea are largely related to contaminated food and water supplies. The most common etiology is viral gastroenteritis which is a self-limited disease. Most patients do not require laboratory workup and routine stool cultures are not recommended. Treatment focuses on preventing and treating dehydration. Oral rehydration therapy with early feeding is the preferred treatment for dehydration 7.

METHOD: This study was a questionnaire based cross sectional study conducted among the second professional medical students of RIMS, Ranchi, Jharkhand, India. This study was conducted in Department of Pharmacology between March to April, 2017. Students, who participated in the study were explained about the aim of the study. They were ensured about confidentiality of the information collected. A self-prepared questionnaire regarding the practice of antidiarrhoeal OTC drugs was given to them. The questionnaire had questions related to knowledge about OTC drugs, sources of drug information, name of OTC antidiarrhoeal used, frequency of intake in past 6 months, specific cause of diarrhea, reason for self-medication and lastly idea about practice of self-medication. Questionnaire was given to them during one of their lecture classes of pharmacology and were asked to return after filling it completely. All questions were multiple choice questions and they have to tick only one correct answer. Filled questionnaires were evaluated for their completeness and only the data from the completely filled questionnaire was taken for analysis. Data was analyzed in the form of percentage.

TABLE 1: CHARACTERISTICS OF THE STUDY PARTICIPANTS 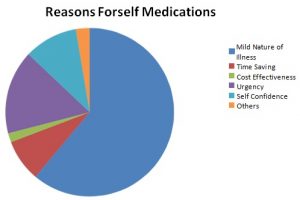 FIG. 2: REASONS FOR SELF MEDICATIONS

Antidiarrhoeal drugs used by the students are shown in Table 2. The most common drug used by the medical students was oral rehydration salt (ORS) in 38.39% followed by antibiotics in 27.78% students. The least commonly used drug was Loperamide (1.34%).

TABLE 3: SPECIFIC CAUSE OF DIARRHEA 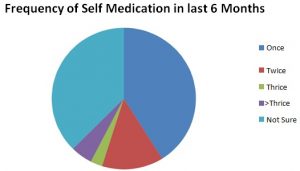 FIG. 3: FREQUENCY OF SELF MEDICATION IN LAST 6 MONTHS

Fig. 3 shows that 41.07% students have used these self medications once, 13.84% used twice in last 6 months while 37.5% were not sure about this. Regarding the cause of diarrhea as shown in Table 3, about ¾ (74.55%) students accepted that diarrhea was food associated. 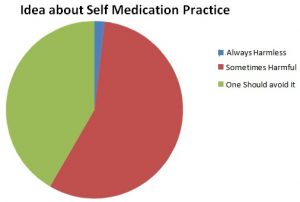 FIG. 4: IDEA ABOUT SELF MEDICATION PRACTICE

Only 6.25% accepted that it was drug induced. 55.8% of them had the idea that self medication is sometimes harmful while 41.07% of them were against the practice of self medication, so one should avoid it as shown in Fig. 4.

DISCUSSION: Self medication is consumption of drugs to cure a disease without consultation of a registered medical practitioner or repeated use of same drugs for repeated attack of similar symptoms 19. Since OTC drugs are easily available drugs, so self medication of these drugs is very common among the population. It can be potentially hazardous to the human beings due to incorrect self diagnosis, delay in seeking medical advice when needed, infrequent but serious adverse reactions, dangerous drug interactions, incorrect manner of administration, incorrect dosage, incorrect choice of therapy, masking of severe disease and risk of dependence and abuse 17.

Different OTC antidiarrhoeal drugs are available in medicine shops. Majority of students used ORS as the self medication. Many patients with sudden onset of diarrhea have a benign and self limited illness requiring no treatment or evaluation. In severe cases, dehydration and electrolyte imbalances are the principle risks, particularly in infants, children and frail elderly patients. Oral rehydration therapy is therefore a cornerstone for patients with acute illness resulting in significant diarrhea. This is of particular importance in developing countries, where the use of ORS therapy saves many thousands of lives every year 26. Second next common drug group used was antibiotic. Only 1% here used Loperamide as antidiarrhoeal. Because of effectiveness and safety, Loperamide is marketed as over the counter distribution and is available in capsule, solution and chewable tablet forms. It acts quickly after an oral dose with peak plasma levels achieved within 3-5 h 26. Maximum no. of students was of the view that self medication is sometimes harmful while about 41% were against the use of self medication. Second year students know about drugs, its importance as well as adverse effects. So only 3% of them believe that self medication is always harmless. In one of the North Indian study 51.2% were of the view that self medication is harmless 5, whereas in another study 48% of medical students supported self medication and 34% were against its use 27.

CONCLUSION: Our result shows that self medication is very common in medical students especially in acute diarrhea. These drugs are easily available in medicine shops as OTC drugs. They mostly use ORS, antibiotics or probiotics. But Irregular use of antibiotics causes development of drug resistance which is increasing worldwide because self medication is a global phenomenon.

Self medication practice would be safe if the people who use it have sufficient knowledge. Medical Students have insufficient knowledge about drugs and disease process, so they need to be educated about long term adverse effects of the drugs by its irrational use and also there is a need for review of educational programmes so that rational use of medicines should be promoted.

ACKNOWLEDGEMENT: The authors are thankful to second year undergraduate medical students, RIMS, Ranchi, Jharkhand, India for their co-operation and to Head of Department, Pharmacology, RIMS, Ranchi for her constant support to carry out this work successfully.

CONFLICT OF INTEREST: Authors declare no conflicts of interest.