THE PREVALENCE OF FUNGI ON THE POST HARVESTED GUAVA (PSIDIUM GUAJAVA L.) IN AKSUM

THE PREVALENCE OF FUNGI ON THE POST HARVESTED GUAVA (PSIDIUM GUAJAVA L.) IN AKSUM

Guava is one of the most liked fruit items in Ethiopia and has its own economical importance. In concern with that a project experiment cum survey was carried out on the prevalence of post-harvest diseases of guava was conducted in Aksum in the months of January and March, 2009. During the experiment, 80 samples of diseased guava fruits were collected from different sites of Aksum, Ethiopia. The isolation of post harvest pathogen and analysis of diseased guava fruits was carried out  and found that the prevalence of maximum fungi found to be Pestalotia psidii about 32.16% was the major post harvest pathogen isolated from the samples, followed by Rhizopus stolonifer (16%), Aspergillus niger (10.40%), Penicillium expansum (7.20%), Rhizoctonia solani (3.20%) and Fusarium sp. (1.6%). This study is an initiation for the effective post harvest management practice to increase the shelf life of guava and minimize the loss of post harvested guava in the coming future.

INTRODUCTION: The Aksum city of Ethiopia is known for its holy and tourist destination in African reigon. The genus Psidium to which guava belongs is included in the family Myrtaceae. This genus is originated in tropical South America, where it occurs in wild as well as in cultivated forms. It is then spread to most of the tropical and subtropical world and become naturalized in several countries 1. Guava was adopted as a crop in the warmer parts of Africa and Asia including India during early 17th century soon after it was introduced by Spanish and Portuguese colonizers. It has been reported that the genus Psidium is common throughout all warm areas of tropical America and in the West Indies since 1526.

The genus Psidium comprises approximately 150 species of small trees and shrubs, only a few produces edible fruits and the rest are wild with inferior quality of fruits. About 20 species have edible fruits of which the most commonly cultivated is the common guava, i.e., Psidium guajava L. Guava is hardiest among tropical fruit trees and excels most other fruit crops in productivity and adaptability. In case of ascorbic acid, pectin and other minerals contents it scores high over other fruit; that is why the common guava is aptly referred to as “poor man’s apple” and / or “apple of the tropics”. Guava is a very productive and highly profitable fruit crop.

It is liked by fruit growers due to its wide adaptability and higher return per unit area. But its successful cultivation is hampered by a number of biotic and abiotic factors. Among the biotic factors, diseases take a heavy toll. Some important guava diseases include guava decline, wilt, anthracnose, Botryodiplodia rot, fruit rot, Phoma rot, Rhizopus rot, collar rot, Pestalotia leaf spot, Cercospora leaf spot, and seedling blight. Post-harvest rots of guava are caused by many pathogens, which are capable of infecting fruits during transit and storage 2, 3, 4, 5. Around 90-100 percent fruits have been found infected with fungi namely Pestalotia psidii, Colletotrichum gloeosporioides, Rhizopus stolonifer, Aspergillus niger during storage 6. Due to fleshy in nature it is easily perishable, the post–harvest diseases of guava presents a rather peculiar problem. There is a massive wastage under our poor marketing and transit facilities. The most important causal agent responsible for the post–harvest diseases of guava, are the fungi. These microorganisms invade the fruit and cause considerable damage at the post–harvest stage, during transit, storage and transportation to the market specially seen in Ethiopia as most of the fruits are imported or from the natural resources of the country and the fruit is available all the twelve month through out the country.

MATERIALS AND METHODS: The Diseased guava fruit samples were collected separately from ten different sites of Aksum i.e., main Market (S1), near to Ethiopis hotel (S2), Bus stand Market (S3), market near to church (S3), Mekelle (S4), 2Shop keepers of Aksum town(S5 & S6), University campus (S7), near to Abinet hotel (S8), near to Africa hotel (S9), near to Ethiopis hotel (S10). Eight diseased guava samples were collected from every site. The samples were brought to the laboratory under aseptic condition where they were screened (before washing and after washing with water) for their associated fungal flora. Out of these, some samples were heavily infested with fungi, some were slightly infested and some were not at all infested (i.e., healthy), fungal pathogens were isolated from infected guava fruits.

The determination of fungi was done by following the protocol 7 as described below:

These media were sterilized at 1210C and 15 lbs psi for 20 minutes. The petridishes were incubated in inverted position at 280C for 4-5 days.

The above experiment was followed by another experimental protocol 8 as mentioned below:

The work was an attempt to correlate the fungal infestation and quality of guava under storage.

RESULTS AND DISCUSSION: A substantial number of fungi were associated with the post harvested guava i.e., a total number of six fungal organisms were isolated from the samples of guava. The six different fungi viz. Pestalotia psidii, Rhizopus stolonifer, Aspergillus niger, Penicillium expansum, Rhizoctonia solani and Fusarium sp. were found associated with the rotting of the guava fruits. The frequency of occurrence of fungi associated with post harvested guava with respect to different sites of Aksum city is shown in the graphical presentation by figure 1. As the temperature of incubation was 28oC, only mesophilic fungi were obtained in the harvested guava samples. The mycoflora of post harvested guava predominantly consisted of ubiquitous mould genera Pestalotia, Aspergillus, Penicillium and Rhizopus possibly because of their omnipresence, capacity to grow on all possible substrates and growth on a wide range of temperature and humidity. All these fungi produced same symptom in laboratory conditions. 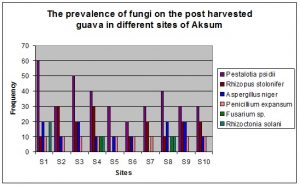 FIG. 1: THE GRAPHICAL PRESENTATION OF THE PREVALENCE OF FUNGI ON THE POST HARVESTED GUAVA IN DIFFERENT SITES OF AKSUM

The maximum and minimum frequency values of fungi isolated from the post harvested guava from different sites of Aksum city were 60 to 10 respectively. The presence of uniform fungi i.e., Pestalotia psidii, Rhizopus stolonifer, Aspergillus niger and Penicillium expansum in the sample collected  guava collected from the sites viz., main market (S1), near to ethiopis hotel (S2), Bus stand market (S3), market near to church (S3), mekelle (S4), 2 shop keepers of Aksum town(S5 & S6), university campus (S7), near to Abinet hotel (S8), near to Africa hotel (S9), near to ethiopis hotel (S10). However the harvested guava of collected from main market (S1) showed a higher value of fungi especially Pestalotia psidii followed by Aspergillus niger. The presence of Fusarium sp. and Rhizoctonia solani was found to be less as compared to other fungal species.

The overall presence of fungi (pathogen) has clearly shown the effect of various types of fungi affecting the guava. The highest or the maxima frequency  was observed in Pestalotia psidii with 32.6% causing off fruit canker in guava with the follow up of this soft watery rot has found to be 16% with  Rhizopus stolonifer. The prevalence of Aspergillus niger and Penicillium expansum are compared to be similar with approximately same frequency of presence causing Aspergillus rot and Penicillium rot respectively. The post harvest disease of fruit rot caused by Rhizoctonia solani were found to be more as compared to Fusarium sp. as shown in figure 1.2. During the experiment it was also seen that both the species of Cephalosporium and Fusarium are associated closely to each other. 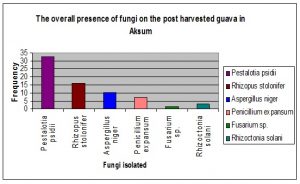 FIG. 1.2: THE GRAPHICAL PRESENTATION OF THE OVERALL PRESENCE OF FUNGI ON THE POST HARVESTED GUAVA IN AKSUM

The various fungal organisms affecting the post harvest guava and causing diseases was earlier reported in the investigation 9, 10, 11. Similarly Pestalotia psidii was very common disease and the reports from various countries show that this species is found to be the most common post harvest fungi12, 13, 14. The effect of Aspergillus niger and Penicillium expansum causing rot in the post harvested fruit was also reported 15, 16. Factors as inoculums density, presence and concentration of microbiotic components on fruit surface, physiological state of the fruit and interaction of these factors with temperature and relative humidity may have influenced the incidence of fruit rot in Aksum. The disease prevalence and losses have been recorded by many scientists due fungi in post harvested guava from time to time. Therefore it may be concluded that the prevalence of Pestalotia psidii, the fruit canker causing fungal pathogen of guava was found to be maximum in the study. Therefore it is necessary for the future an extensive study on the guava should be done as it is an important fruit which is available all the 12 month in Ethiopia. The information obtained from this study can be effectively utilized to develop a suitable post harvest management practice to increase the shelf life of guava and minimize the loss of post harvested guava in coming future.

ACKNOWLEDGEMENT: I wish to acknowledge my sincere gratitude to Dr. Akhlilu, Vice President for Academic and Research, Aksum University (Ministry of Higher Education) for providing me the opportunity to persue the research work in this esteemed university