ABSTRACT: Treatment ofcancer painis mainly based on the use of opioidanalgesics.This study includes opioids commonly used in Polish clinical practice, such as: dihydrocodeine, tramadol, buprenorphine, morphine, fentanyl, oxycodone and methadone. The purpose of our research is performing a quality assessment of the available clinical trials concerning opioids efficacy and an evaluation of the cause of the limited quantity of systematic reviews in form of meta-analysis. The quality of methodology used in included trials was assessed by Jadad scale. The following databases was searched: Medline (PubMed), Cochrane Library and websites of agencies included in INAHTA (The International Network of Agencies for Health Technology Assessment in Heath). A wide variety of drug dose, dosage forms, routs of administration and pain measuring scales resulted an impossibility of performing a meta-analysis comparing opioids in terms of their effectiveness. Collected studies were assessed for analgesic effect and side effects of opioids therapeutic use, refer to other drugs and depending on doses, frequency of administration, dosage forms (modified/immediate release). The analysis of safety was performed by evaluating the drug-related side effects that resulted an exclusion from the study and general adverse reactions associated with treatment.

INTRODUCTION: The range of the evidence-based researches concerning effectiveness of opioid analgesia used in oncological pain treatment isn't raising doubts. However, we have to take note of deficiency of wide systematic reviews assessing hierarchies of the effectiveness of opioids taking the methodology of meta-analysis into account. A quality assessment of the available clinical research concerning opioid analgesics efficacy and an evaluation of the cause of the limited quantity of systematic reviews in meta-analysis form are the purpose of this study.

For the systematic review of literature following researches were chosen: retrospective, prospective, randomized clinical controlled trials, single/double-blind trials or open-label trials. In the analyzed problem individual opioids, opioids from the same group but varies routes of administration or placebo were used as comparators.

Studies were excluded due to following reasons: theoretical or review type of the publication, too small number of participants (sample size ≤ 10) and also researches focused on mechanisms of disease or mechanisms of the treatment drop-outed of the study. The main endpoint of the study is a grade of the analgesic effect of opioids used in neoplasm pain management.

A selection of information was based on a detailed protocol developed before searching and data compilation. Independently of each other, two researchers searched databases and selected the data. The protocol assumed, that in case of the inconsistency between researchers, there will be a discussion all the way to reaching an agreement.

The quality of methodology used in included trials was assessed by Jadad scale. Additionally, the studies were evaluated for the size of the study groups.

The following databases was searched:

Additionally, researchers used references found in primary and secondary researches. 257 studies were identified, whose full texts were evaluated according to criteria of inclusion or exclusion from the systematic review. A diagram, according to QUOROM, presents the successive stages of searching and selection of primary and secondary research (Fig.1). Finally, for the systematic review of clinical trials included 72 publications. 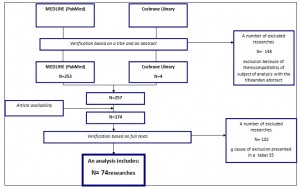 RESULTS: The evaluation of endpoints of compared intervention was based on assessment of analgesic effect of opioids. A wide variety of drug dose, dosage forms, routs of administration and pain measuring scales before/after opioids administration, resulted an impossibility of performing a meta-analysis comparing opioids in terms of their effectiveness. The results of overview are captured in Table 1. The study received a high rate of quality on Jadad scale, from 2to 5 points, with the arithmetic mean of 4, 1 points. The results for morphine trials are captured in Table 2

TABLE 1: THE SUMMARY OF THESCALESOF PAIN MEASURED IN PATIENTS TAKING OPIOIDS INCLUDED IN THE REPORT, ORPLACEBO.

TABLE 2: THE QUALITY ASSESSMENT OF INCLUDED PRIMARY TRIALS ABOUT MORPHINE, ACCORDING TO JADAD SCALE.

2* a blinde method was not used

The analgesic effect was most often measured by VAS scale, which was used in 11 of the 19 studies. In other works, the following scales was used: CAT 3, PPI 4, 10-points NRS 1 and 11-points NRS 11; BS – 11-points 15. In Carchetti study 7, researchers measured the time required to achieve analgesic effect defined as good or complete. Table 4 shows the types of intervention and types of morphine analgesic effect assessment scales used in the studies. With these data, it appears that due to the diversity of research and applied scales we can nonperformer meta-analysis.

TABLE 5: OXYCODONE - THE SUMMARY OF TYPE OF INTERVENTIONS.

In the group which compares oxycodone CR versus oxycodone IR, visual rating scale (VRS) 20 and other 5 – points unspecified scale 21 were used. The second group was less variety in terms of scale which were used. In three researches 22, 24, 25 the VAS scale was used. In Bruera study 27, the intensity of pain was measured by both, VAS and CAT scale. Researchers Heiskanen&Kalso23 used 4 – points VRS scale, Mucci-LoRusso 26 measured pain by CAT scale. Table 5 presents the summary of type of interventions and analgesic effect scale used in studies.

Uniformity of interventions could indicate that implementation of meta-analysis is possible, however, due to the diversity of scales which were used (type, sample size) to measure the effectiveness of analgesic effect, meta-analysis is not possible to perform. Primary research about methadone: This group included three studies 28-30 which present methadone efficacy in comparison to morphine effectiveness. In Grochow study 28, researcher compared methadone and morphine administered intravenously. Two other studies presented methadone and morphine administered orally: morphine SR 29, morphine IR 30. Table 7 below presents the summary of these studies.

TABLE 7: METHADONE - THE SUMMARY OF TYPE OF INTERVENTIONS.

In each research, analgesic effect was measured by different scale: Grochow 28 - PII (MC Gill Pain Questionnaire), Mercadante 29 – VAS scale, Bruera 30 – differences in the elimination of pain. Table 8 presents the summary of type of interventions and analgesic effect scale used in studies with methadone.

TABLE9: BUPRENORPHINE – THE SUMMARY BASED ON COMPARED INTERVENTIONS.

TABLE10: THE SUMMARY OF TYPE OF INTERVENTIONS AND ANALGESIC EFFECT SCALE (PAIN SCALE) USED IN STUDIES.

Although using the same scales in both studies, a meta-analysis is not possible to perform, due to the diversity of forms of buprenorphine and comparators.

The three researches considered the difference in efficacy and safety between fentanyl buccal tablet (FBT) and placebo 42-44. A fentanyl pectin nasal spray (FPNS) was compared to modified release morphine administered orally 45-46, as well as placebo47-48.

TABLE 11: FENTANYL - SUMMARY OF INTERVENTION COMPARED IN THE ORIGINAL RESEARCH.

An analgesic effect was measured mostly in 11-degree NRS scale (used it in 15 trials), in three publications a VAS scale was used 34, 37, 52. In other researches this effect was measured by following scales: MAUC 36 and a 10-degree NRS scale 41. Table 12 presents all types of intervention for fentanyl and types of scales used to evaluate analgesic effect, which was analysed in this report. The following data shows that despite of similar scales used to measure an analgesic effect of opioid, its comparators were different, which made it impossible to perform a meta-analysis.

TABLE 12: FENTANYL - SUMMARY OF THE TYPE OF INTERVENTIONS AND THE SCALE OF ANALGESIC EFFECT ASSESSMENT.

TABLE 13: TRAMADOL – THE SUMMARY OF TYPE OF INTERVENTIONS.

The table below presents different type of scales used to measure analgesic effect of opioids. A VAS scale was used in two studies 54-55, which presented various formulations of tramadol. A Wilder-Smith research 53 measured effectiveness of opioids by VRS scale while Mercadante 56 use 11-points NRS scale. Table 14 presents the summary of type of interventions and analgesic effect scale used in studies with tramadol.

Due to variety of tramadol dosage forms as well as differences of analgesic effect scale type,

a meta-analysis was not feasible.

An assessment of drug safety: The analysis of safety was performed by evaluating the drug-related side effects that resulted an exclusion from the study and general adverse reactions associated with treatment. These studies led to development general profile of typical side effects of opioids such as:

The highest percentage of patients excluded on account of adverse effect was observed in group using tramadol – 23% and the lowest percentage in group where buprenorphine was used – 1%. Those available results came from small populations (including 107 patients - buprenorphine and 70 patients - tramadol). In the case of morphine, fentanyl and oxycodone - opioids with the largest sample size, the percentage of patients excluded due to side effects developed as follows: 8% - fentanyl, 4% - morphine, 9% - oxycodone. All the results are illustrated in the Fig. 2.

TABLE 15: THE MOST COMMON SIDE EFFECTS REPORTED DURING TRIALS, THE NUMBER OF PATIENTS EXCLUDED DUE TO SIDE EFFECTS

* Laurettiresearch 25 excluded because of no information, of which group the patient was excluded(OKS or MOR)

** Wilde- Smith research 53 excluded because of no informations, of which group the patient was excluded (TRAS or MOR) 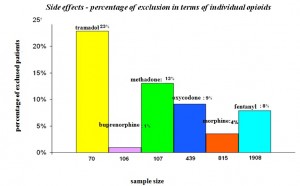 FIG.2: SIDE EFFECTS OF OPIOIDS – PERCENTAGE OF EXCLUSION FOR INDIVIDUAL OPIOIDS.

and tramadol-3. While the average for all primary publications achieves 3,43. The main limitation of the study is the fact that searching was carried out without access to the Embase database, which resulted a limited number of research involved.
Another limitation is the availability of "head to head" type of research for all analyzed opioids. A morphine is the most commonly used analgetics according to the WHO, and so there are a lot of trials which evaluate its effectiveness in comparison to oxycodone, methadone, fentanyl and tramadol.

Beyond that, even within the group of opiods, there was a wide variety of forms of drug administration. It should also be noted – a various time of analgesic effect intervals (a daily average, an average after stable analgesic effect achievement) and the diversity of pain intensity scales. This had a direct impact on the inability to perform a meta-analysis.

Another limitation is the sizeof population related to the results for various opioids. The smallest number of patients was involved in studies about buprenorphine, methadone and tramadol (less than 250 people for each opioid). Researches about oxycodone included more than 400 patients, about morphine over 800, and fentanyl just over 1900.

In addition to the above, more restrictions which could have a significant impact on the study results, have not been identified.

CONCLUSIONS: The analysis of clinical trials evaluating the efficacy of opioids used in oncological pain treatment is a high-quality research by Jadad scale. They are mostly clinical controlledtrials, with a randomization and single/double-blind method.

The study includes opioids commonly used in the Polish clinical practice, such as: tramadol, buprenorphine, morphine, fentanyl, oxycodone and methadone. An individual studies suggest the effectiveness of various opioids, however, different types of  pain intensity assessment scales and the diversity of the studies groups make it impossible to present the meta-analysis. This is probably the main reason for which the number of systematic reviews, especially with a meta-analysis is limited for this therapy. This research confirms the inability to perform a meta-analysis on the basis of the available primary studies, because of important differences in drug dosage, doses and pain assessment scales.